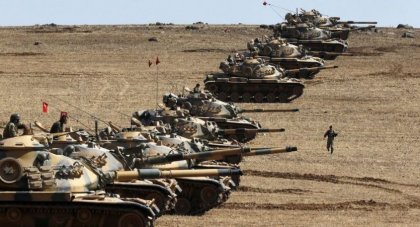 While being a violation of the sovereignty of a neighbouring country, Turkey’s incursion into Syrian territory along the Syria-Turkey border and its attacks on Islamic State group (IS) and People’s Protection Units (YPG) positions there have not been heavily criticised except by the USA and various Kurdish groups. It has received mild criticism from the Russian and Syrian governments, and significant support from the Turkish population and many Turkish opposition groups. The intervention – called Operation Euphrates Shield – is expected to be a longterm one, and is set to worsen already-tense relations between Turkey and the USA.

The operation follows several fatal operations in Turkey by IS and the Kurdish Workers Party (PKK) in the wake of state security weaknesses after the July coup attempt. The Syrian YPG is the armed wing of the Democratic Union Party (PYD), and has strong links with the PKK, which Turkey considers a terrorist group. While the US also considers the PKK a terrorist group, it regards the PYD/PYG as an essential element of its anti-IS armed forces in Syria, and a component of what it calls ‘Syrian Democratic Forces (SDF)’. Relying on two diametrically opposed actors – Turkey and the YPG, both US allies – to fight a common enemy presents the USA with a tactical and strategic dilemma. Soon after Turkey’s incursion began on 24 August, the USA called on YPG forces to move east of the Euphrates River, a key demand of Turkey, but on Wednesday US spokespersons criticised Turkey’s moves against the group. With the YPG refusing to relocate, USA faces the prospect of losing the largest component of its SDF if it pushes too hard. The head of US Central Command, Joseph Votel,announced at a Pentagon press briefing this week that the YPG had moved east of the Euphrates, but the lack of agreement on whether this is true will exacerbate relations between the two NATO allies.

Turkey had been unable to convince its allies to impose a no-fly zone on the Syria-Turkey border which, Turkey claimed, would help keep millions of refugees safe; Operation Euphrates Shield is likely to create a de facto ‘safe zone’ for refugees and the Free Syrian Army (FSA).

Turkish planes had begun the first movements in the operation, bombing IS targets in the northern Syrian area of Jarablus. Two hours later 1 500 Free Syrian Army (FSA) fighters crossed over from the Turkish region of Karkamis, accompanied by an armed battalion of twenty-five M60A3 tanks, and close fire support from the Turkish Armed Forces (TSK). The FSA troops include Faylaq al-Sham and Ahrar al-Sham, which Turkey considers ‘moderate’ – particularly after the FSA sidelined al-Qa'ida-affiliated groups two weeks earlier.

The operation involves 350 TSK soldiers, 200 troops from mechanised units, and 150 special forces. They are supported by heavy aerial operations conducted collectively by the anti-IS coalition. In addition, seventeen Turkish war planes are participating in the operation, including eleven F16s. Turkey is also using newly-acquired Bayraktar TB2 unarmed drones. An armed brigade is on reserve at the border area of Karkamis and security analysts suggest the nearby base at Kilis Elbeyli will coordinate air support and medical evacuation with FSA units. Based on the type of armaments used by the TSK, Turkey is likely intending to have a longterm presence in Syria’s north with, possibly, a military base in Jarablus that serve as a coordination and training area for FSA fighters. Turkey hopes the FSA can prove its mettle in the field, and then be able to capture the IS stronghold of al-Bab. Should the FSA take that city, it will favour the opposition politically, and deprive the YPG of its status as the most efficient anti-IS force.

This is the first occasion that a NATO member puts boots on the ground in Syria since the war there began in 2011, and comes at a critical time for Turkey, which just six weeks ago experienced an attempted coup that dealt a severe blow to the TSK’s prestige. Caught between its membership in NATO and the deterioration of domestic security, Turkey extracted much benefit from the recent turnaround in relations with Russia to secure Moscow’s assurances that Russian aircraft will not fire on FSA and Turkish troops during this complex operation. The Russian foreign ministry has officially said it ‘is concerned about Turkey’s incursion into Syria’ and that actions against IS should be coordinated with Damascus. Syria itself responded with a statement complaining about the violation of its ‘sovereign rights’, but not suggesting it would do anything more about it.

Turkey’s direct involvement in Syria reflects a change in Ankara’s regional policy from one that claimed humanitarian issues at the core of its policy to a return to hard security goals by national interest. A key political and security aim is to prevent the creation of a contiguous area controlled by the PYD on the 822-kilometre Turkey-Syria border. To achieve this it becomes necessary for the FSA and other rebel factions to unite under a single political banner that regards the territorial integrity of Syria as a precondition for peace talks. Realising this political aim will require the FSA to secure more than just the Jarablus area, and to extend its control to terrain to the west up to the Rai-Azaz / Jarablus-Cobanbey line. Should it gain control of this area, Turkey will be able to cut off IS supply routes and isolate the PYD in the town of Afrin. Turkish warplanes and artillery targeted YPG targets in Afrin on the second day of Euphrates Shield.

The quiet responses to Turkey’s incursion by Russia and Syria (whose response was limited to a written statement) reflects their similar objective that Syria’s integrity be maintained; they thus would be unhappy to allow the PYD to set up an autonomous Kurdish area. Syria’s Iranian allies are also unhappy about what message Kurdish autonomy in Syria might send to Iranian Kurds – especially since recent clashes between the Democratic Party of Iranian Kurdistan (PDKI) and Iranian Revolutionary Guards, and reports that the USA might be supporting the PDKI. Tehran has already said it tacitly supported Turkey in its anti-PKK effort although the Iranian Foreign Ministry said Turkey should halt operations that challenge Syria’s against central government authority, suggesting that Iran remains sceptical of Turkey’s intentions in northern Syria.

Qatar, another regional actor which has supported the FSA, will support Turkey in its push against IS and the YPG as the two countries share similar perspectives on key issues. Qatar has sought to diversify its defence partnerships with the setting up of a Turkish-Qatari military base in the emirate state, which also reflects the rapidly changing security architecture of the region.

Russian President Vladimir Putin and US President Barack Obama are due to meet on the sidelines of the G-20 Summit in China on 4 September, but it is unlikely that any substantive movement on a Syrian peace deal will be announced as fighting between the government and rebels continue in the key area of Aleppo.