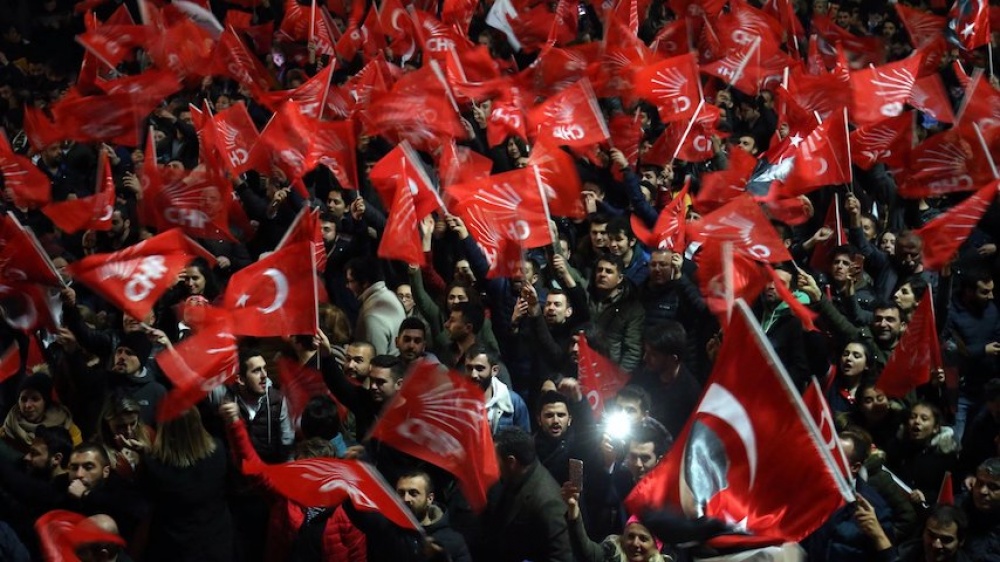 Turkey’s local election concluded with the country’s ruling Justice and Development Party (AKP) incurring heavy losses in major cities, and the opposition Republican People’s Party (CHP) making significant gains. The poll, which will result in the election of new mayors, mukhtars and local assembly members, saw the AKP losing the capital, Ankara; the commercial hub and largest city, Istanbul; and a major city, Izmir. Although the AKP and its alliance still won around fifty per cent of the votes overall, losing major cities is an indicator of voters’ waning confidence in the AKP and its leader (and Turkey’s president) Recep Tayyip Erdogan, and punishing the party with its biggest losses since attaining power in 2002.

Erdogan based the AKP’s campaign on national security, side-lining local economic grievances that caused many voters concern about their future. The depreciation of the Turkish Lira against the dollar in 2018 saw inflation increase to twenty-five per cent in October 2018 and resulted in rising unemployment. Although the AKP lodged a complaint with the Supreme Electoral Council, challenging the results in Istanbul and thirty-eight other districts, Erdogan seems to have accepted these election as a learning moment, and has vowed to fix the economy to regain voter confidence ahead of the 2023 national elections. Nevertheless, the current loss signifies the mood of an electorate which finds itself disconnected from the AKP that it once embraced, and is seeking refuge in the opposition. The elections were also seen as a referendum on Erdogan’s rule, after the country moved from a parliamentary to a presidential system in 2018, extending his powers significantly. 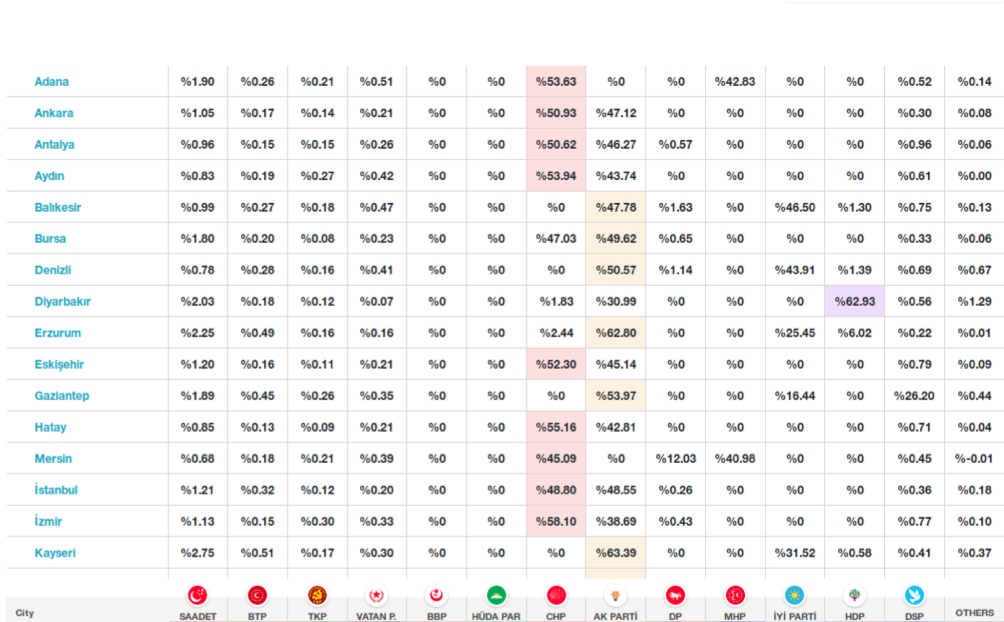 Elections results  show that these elections have been challenging for Erdogan. They are the first elections since he was elected in 2018 as the country’s first executive president after a controversial referendum in 2017 that changed the electoral system from parliamentary to presidential. Under the new system, Erdogan can rule the country almost by decree, and many people fear that the country is in the grip of dictatorial tendencies from the president. Since his election, the AKP has focused on positioning the country internationally in a region that is plagued by political instability and insecurity. This continued to be the case as the AKP and its coalition partner, the Nationalist Movement Party(MHP), campaigned for the election under the banner of the People’s Alliance.

The Alliance’s campaign focused on national security and terrorism, taking swipes at some candidates by accusing them of links to the outlawed Kurdistan Worker’s Party  (PKK) and of being western agents. Erdogan further blamed the deterioration of the Turkish Lira on foreign powers trying to destroy Turkey. Erdogan’s rhetoric on national security and terrorism meant that he avoided speaking about the country’s economic issues, whereas his opponents focused on the economic problems, blaming them on his government, which they accused of corruption and maladministration. The CHP capitalised on the discontent of the electorate amid inflation increasing from less than ten per cent in March 2014 to a peak of twenty-five per cent in October 2018.

Turkey’s economic difficulties were exacerbated by its international diplomatic problems, specifically its complicated relationship with the USA. In August 2018, the USA imposed sanctions on Turkey over the detention of US pastor Andrew Brunson, who Turkey charged with aiding the 2016 attempted coup. Although Turkey eventually released Brunson – after a series of bilateral diplomatic talks, the Turkish Lira failed to strengthen amid huge government debt created by massive spending and borrowing. In January 2019, the US president, Donald Trump, threatened to destroy the Turkish economy again if Turkey attacked US-supported Kurdish forces in Syria. The Turkish Lira suffered again, but managed to remain steady after Erdogan cut down on his rhetoric threatening the US proxies in Syria. Nevertheless, relations between the USA and Turkey remain fragile, especially after the latter halted the sale of fighter jets to Turkey because of Ankara’s intention to purchase the Russian S-400 defence system. The decision saw the Turkish Lira fall by three per cent to 5.6590 against the dollar. Many issues remain unresolved between the two countries, including the future of Kurdish forces in Syria, which Ankara  sees as the extension of the PKK.

Another factor that contributed to the CHP victory was Erdogan’s suppression of Kurdish candidates contesting the election. Before announcing the election, Erdogan removed and replacedmayors in predominantly Kurdish areas  with AKP leaders close to him. Soon after the outcomes of the current election were announced, Erdogan threatenedto again replace Kurdish mayors with trusted ones linked to the AKP. Some Kurdish politicians, such as   former co-chair of the Kurdish-majority People’s Democratic Party  (HDP), Selahattin Demirtas, were forced to campaign from prison, while many others linked to the HDP had been charged with terrorism and links to the PKK. Due to this and other factors, the HDP did not field candidates in many areas, including Istanbul, thus losing their voters to the CHP. Further, the HDP did not enjoy much media coverage during its campaign, with over ninety per cent media coveragegiven to the AKP.

The AKP did not lose only Kurdish voters but also voters in areas where Erdogan had traditionally enjoyed widespread support, such as the Mediterranean region. Adana and Antalya were bothlost to CHP. In the resort city of Antalya, the AKP won forty-six percentof the vote against the CHP’s fifty per cent. This further frustrated Erdogan, who had hoped to tap into nationalist rhetoric for his traditional supporters in the Mediterranean areas. The loss ofMersin and Hatayto the CHP has almost kicked the AKP out of theAegean and Mediterranean region. It lost many strategic areas in these elections despite the political odds being stacked in its favour. Erdogan’s repeated accusations against opposition candidates of terrorism, his jailing of journalists and closing downof independent media, and his suppression of Kurdish politicians still failed to secure the AKP a victory in the country’s major cities. Ankara fell to the CHP’s fifty-nine per cent win,fifty-eight per cent of Izmir’s voters put their cross next to CHP candidates’ names, and in Istanbul, which is politically important for Erdogan, the CHP won by 48.8 per cent.

Istanbul, the contested jewel in the crown

These major losses led the AKP officially to object to the electoral outcomes, claiming irregularities. The objections reflect Istanbul’s political and personal significance for Erdogan, whose career début was in Istanbul when he was elected mayor in 1994. After the AKP suffered a painful defeat in Ankara, Turkey’s Supreme Electoral Council ceased the counting of ballots in Istanbul with around ninety-nine per cent counted. The state-run Anadolu news agency stopped reporting on the vote tallies shortly thereafter. The AKP candidate for Istanbul, Binali Yildirim, a former prime minister, claimed victory over CHP candidate Ekrem Imamoglu even though the CHP led by around 5 000 votes. The electoral board declared Imamoglu the winner even though the results remain ‘unofficial’ until the objections are dealt with. The indications are that the electoral council will keep the results likely the same despite the AKP objections. Indications are that the electoral council will likely maintain the results in Istanbul, despite AKP claim’s of the involvement of ‘organised crime’ in some Istanbul districts. Despite ongoing recounts in many Istanbul districts, the electoral council is not expected chamge its original result, despite AKP objections.

Together with the overall results and the AKP’s loss of major cities, the Turkish local elections reflect the mood of a discontented electorate. The opposition has been re-energised, and provided with a morale boost to enable it to build support against the AKP and Erdogan ahead of the 2023 general elections. The loss has been a wake-up call to the AKP, which has vowed to work harder to regain lost support. The rhetoric to rebuild AKP support may also be a sign that Erdogan will not take steps to undermine the municipal elections’ outcome by exercising his presidential powers. Turkey’s rampant economic woes, exacerbated by local and foreign challenges that contributed to the AKP defeat might see Erdogan make certain concessions to stabilise the economy using presidential decrees that could undermine democratic processes. With the overall results remaining the same even after the review of the objections, it remains to be seen whether Erdogan will concede defeat in Istanbul. What is more important is what he does going forward, with Turkey mired in a suffering economy and a disgruntled electorate.

Last modified on Tuesday, 09 April 2019 10:49
Tweet
More in this category: Budding frenemies: The complicated US-Turkish relationship »
back to top