Khashoggi murder: Killing dissent even from within 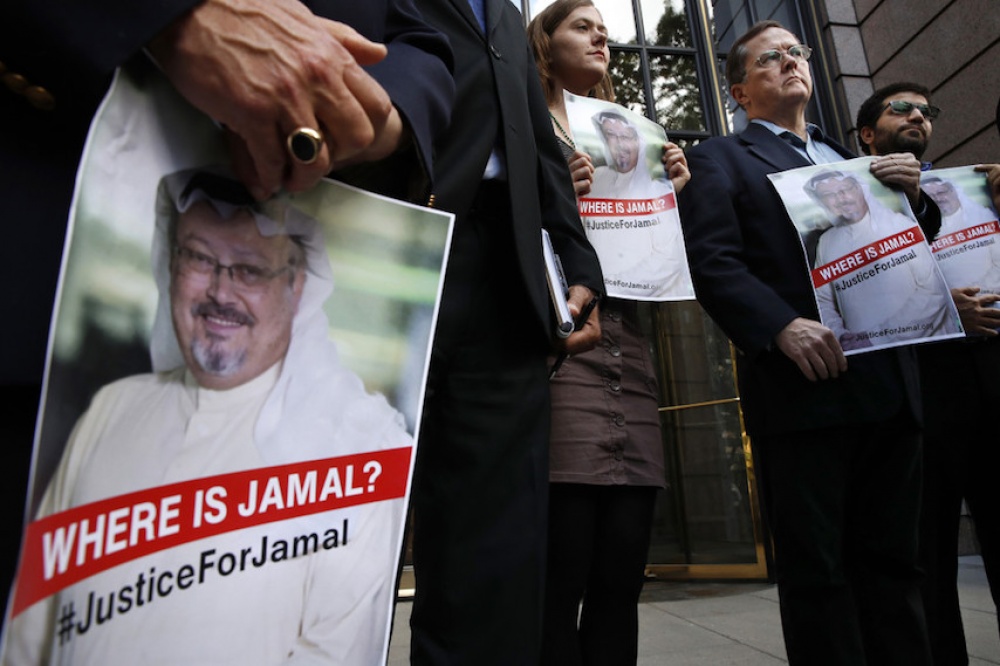 Published in Saudi Arabia
Tagged under

The gruesome murder of exiled Saudi journalist Jamal Khashoggi in the Saudi consulate in Istanbul was designed to be a clear and firm message for Saudi dissidents, and reflected the current Saudi sense of impunity. Saudi Arabia, and particularly its crown prince, Mohammed bin Salman (known as MBS), however, seemed to have miscalculated the consequences of the murder. The incident caused immediate international ructions, and increased pressure on Saudi Arabia. It is still unclear, however, whether there will be long-term consequences or whether Saudi Arabia will succeed in covering up the murder.

Khashoggi’s murder indicates MBS’s paranoia and intolerance for criticism. Khashoggi, after all, was a supporter of the country’s monarchy and an establishment figure – even if he was somewhat critical of MBS. He had been an adviser to another Saudi prince, Turki bin Faisal, former head of the Saudi intelligence service; had worked in Saudi Arabia’s London and Washington embassies; and had initially supported MBS’s ‘reform’ initiative. He was, thus, an insider who had turned his back on MBS, making him, arguably, more dangerous than a dissident. Further, even in the authoritarian monarchy that Saudi Arabia is, the man western media and politicians liked to tout as a great ‘reformer’ has deepened the levels of repression, even arresting dozens of members of the royal family in November 2017, and detaining influential religious scholars such as Salman al-Awda and human and women’s rights activists. These efforts have helped concentrate power in the crown prince’s office, as well as expanded his and the state’s coffers through large amounts of extortion money.

Khashoggi’s murder was undertaken with the brazenness with which MBS has defined himself, taking place in a consulate, with a large kill team flown in using their own passports, ignoring a Turkish camera monitoring the entrance to the consulate. This allowed Turkey to easily gain intelligence about the murder, including video and audio recordings. The attitude also reflects the sense of impunity that MBS has developed, an attitude that is justified when one considers his actions over the past three years – since being appointed deputy prime minister and minister of defence - that he has not had to account for. These include the brutal war against Yemen and the massacre of civilians – including schoolchildren; the blockade on Qatar; the kidnapping of a Lebanese prime minister, Saad al-Hariri – and forcing him to resign; last year’s detention of members of the royal family and the extortion of substantial parts of their wealth; the weakening of the Gulf Cooperation Council; and his insulting of Palestinians and warming relations with Israel. He therefore had every reason to believe that he would escape accountability for Khashoggi’s murder as well.

Saudi Arabia had initially denied that Khashoggi has been killed, claiming he had exited the consulate. However, about ten days later, as Turkish sources leaked ever more information and because international attention and condemnation increased, the Saudis suggested that the murder was carried out by ‘rogue killers’, in an attempt to insulate MBS. They also finally acquiesced to Turkey’s request to search the consulate and the house of the consul-general. It is highly unlikely that MBS knew nothing about the murder, especially since seven of the fifteen-person hit squad are from his personal security detail. The Saudi suggestion that it was a botched interrogation is also difficult to sustain considering that autopsy and forensic specialist Salah Abdulaziz Al-Tubaigy was part of the Saudi team that arrived at the consulate and that he, it is reported, brought a bone saw with.

Khashoggi’s killing will have immediate short-term consequences for the Kingdom. It has already attracted hostility from the US senate, which in 2017 narrowly failed to halt Saudi arms sales for weapons destined to be used in Yemen. The most vocal critic is right-wing senator Lindsey Graham, a former defender of the Saudis, who said, ‘MBS is toxic. We should sanction the hell out of Saudi Arabia’. Already, twenty-one of the twenty-two-member senate foreign relations committee called for the implementation of the Global Magnitsky Human Rights Act. The administration now has four months to investigate human rights abuses relating to Khashoggi’s murder; if confirmed, the act stipulates the imposition of asset freezes and travel bans on the culprits. However, the US president, Donald Trump, has dithered between condemning the murder, defending the Saudis, insisting that arms sales to Saudi Arabia were too important to the USA to be jeopardised, and promising ‘severe punishment’. Yet, his is clearly reluctant to take any action against Saudi Arabia, only partly because of arms sales. Other factors include his own business interests with the Saudis, his obsession with Iran and the Saudi support for his anti-Iran initiative, and because MBS is a firm ally in supporting Israel. Further, it is unclear whether the US senate’s righteous indignation will continue or dissipate with midterm elections coming up and Republicans not wanting to seem divided.

The British, French and German governments issued a joint statement condemning Khashoggi’s murder  and advocating an independent credible investigation; the G7 issued a similar statement. But there is no indication that this will result in any concrete action against Saudi Arabia, even if the previous image of MBS they touted – as a moderniser – becomes tarnished.

More Immediately, there has been a significant withdrawal from the Saudi ‘Future Investment Initiative’, MBS’s project to attract funds to Saudi Arabia for his economic ‘modernisation’ and liberalisation  project, scheduled for later this month. Cancellations and/or high-level pullouts have come from companies such as Ford, JP Morgan Chase, Virgin Group, Blackstone and Standard Chartered; media organisations such as Fox, CNN, Bloomberg, Financial Times, and the New York Times; and senior political and economic figures such as the US treasury secretary Steven Mnuchin, the finance ministers of France and Netherlands, the trade secretary of the UK, and IMF head Christine Lagarde. Uber, which Saudi Arabia has shares in, and Fox Business Network, which was a cosponsor of the event, have also withdrawn –Fox Business also withdrew its sponsorship. These withdrawals are sufficient to threaten a collapse of the summit, disrupting MBS’s project in, at least, the short term.

Within the MENA region Saudi Arabia has received support from allies Bahrain, Egypt and the UAE, as well as from Kuwait and the Palestinian Authority, all of which have called for an investigation, but expressed their support for the kingdom. Most of these countries are dependent on Saudi largesse, while the UAE and KSA have a strong economic and military partnership and alliance against Qatar and Iran.

A significant development in the region might be Saudi relations with Turkey, which have been cool, mainly as a result of Turkey’s support of Qatar. The manner in which Turkish intelligence services and the Turkish president, Recep Tayyip Erdogan, have responded, suggest that they have calculated on pushing Saudi Arabia into a corner, as they have done, but may hope that this will force Saudi Arabia to improve relations with Turkey, on terms dictated by the latter. The current situation represents a public relations coup for Turkey and a disaster for Saudi Arabia.  However the Saudis respond, Turkey will emerge in the stronger position. The Turks have also used the incident to strengthen relations with the USA, which were also strained in the recent past, releasing American pastor, Andrew Brunson, who has been in Turkish custody since 2016. Turkey will likely demand that some high-level Saudi official take the fall. They might not aim as high as MBS, however.

Within Saudi Arabia, the murder has had limited impact, and while there is concern about the possible consequences of external pressure on MBS’s standing, there is no indication yet that he will be removed from his position or disciplined in any way. This will be disappointing both for the Saudi opposition as well as dissident and disaffected members of the royal family who wait anxiously for an opportunity to hit back at the crown prince. At the moment, it seems that the worst consequence for MBS might be his father Salman instructing him to take a low profile in the immediate future while attempts are made to contain the fallout of the Khashoggi murder. MBS remains Salman’s favoured son and nominee as his successor.

It is quite likely that, in the long-term, the pressure on the kingdom will slowly dissipate as western geopolitical and economic needs come to the fore again. Many western companies will seek to benefit from the aggressive expansion of the Saudi 230-billion-dollar sovereign wealth fund (Public Investment Fund), which has recently purchased shares in renewable energy, property, and motion production companies around the world. MBS is already deploying Saudi finances to limit the fallout from the murder, releasing 100 million dollars in funding to the US State Department’s counterterrorism programme.

Trump has already said he will not suspend sales of arms to Saudi Arabia because, he claimed, Russian and Chinese companies would replace American ones. Whatever the USA decides, switching heavy weapons’ technology from American to any other is not an easy or short-term process and the Saudis and Americans will remain tied in their arms seller-buyer relationship in the medium term.

While the immediate global response to the Khashoggi murder has imposed substantial pressure on Saudi Arabia, it is unclear that this will have any impact on Saudi Arabia in terms of reducing its repressive actions internally and externally, ending its war in Yemen, or easing its aggressive policies in the region. It is therefore not certain that this will help create space for Saudi dissenters – even within the royal family – to voice their dissent, even if MBS and his security services become more careful about how they suppress opposition.

Last modified on Sunday, 21 October 2018 01:21
Tweet
More in this category: Jamal Khashoggi, small spark for a large fire »
back to top