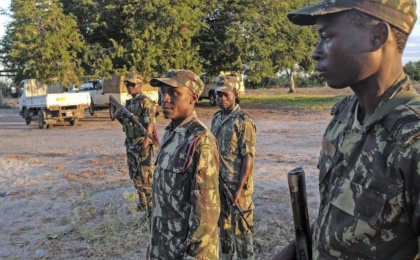 The most recent offensive by insurgents in Cabo Delgado culminated in the capture and occupation of the important and strategic port of Mocímboa da Praia, on Tuesday night, 11 August 2020, several local sources reported to Voice of America (VOA). The insurgents took control of the town after almost five days of clashes, which started on August 5, between them and the Mozambican Navy (Marines), who defended the port, until they ran out of ammunition.

The Islamic State group posted images of killed members of the Mozambican  Defense and Security Forces (SDS) on its communication channels, as well as weapons and ammunition captured in two barracks in Mocímboa da Praia. 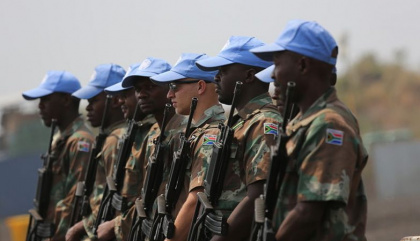 The South African National Defence Force (SANDF) is preparing to be deployed in Cabo Delgado, Mozambique, according to reports published on www.africaintelligence.com on 29 July, and on https://plataformamedia.com/2020/07/30/exercito-sul-africano-preparado-para-entrar-em-cabo-delgado/

On 30 July 2020. It is reported that SANDF units have been undergoing training at Walmannsthal, north of Pretoria, since the beginning of July. According to General Mankayi, the SANDF is preparing for a mission of two months, to “stabilize the region”. This despite the fact that the government of Mozambique has not yet publicly requested assistance from the SANDF. 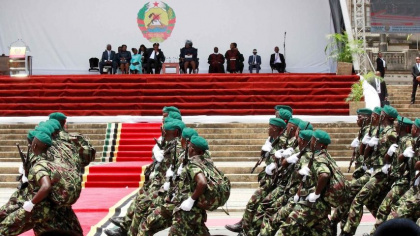 It is not IS that is driving the Cabo Delgado war

There is growing pressure in South Africa for military intervention in the insurgency in Cabo Delgado province in northern Mozambique. But the government needs to be aware that it would be choosing sides in an extremely complicated civil war. The elite from the ruling party, Frelimo, its international backers and the proponents of military support say the war is part of a global campaign by the Islamic State group (IS) militant group that might spread to South Africa.

In fact, this is a civil war in Cabo Delgado driven by growing poverty and inequality. From Boko Haram in Nigeria to insurgents in Cabo Delgado, Isis has tagged on to local insurgencies driven by inequality and marginalisation, only adding a bit of publicity and aid. And it is pleased to see the global panic, which builds its brand. 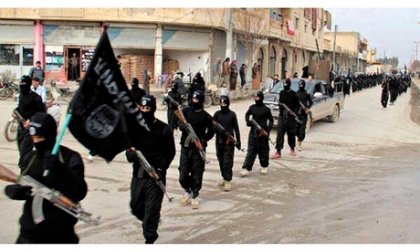 IS reorganising to face new challenges

Reports in January 2017 that the leader of the Islamic State group (IS), Abu Bakr al-Baghdadi, had been killed, reports that he had been captured by Russian troops in Syria, and the insistence by IS sources that he is still alive and fighting in the Iraqi city of Mosul, raise a number of questions about the IS chief’s location, and whether he is still alive. The IS response to this, by nominating a potential successor to Baghdadi, and the fact that the group is in the process of moving its Syria capital from the city of Raqqa to Deir al-Zour, suggest important reorganising in the IS structure and leadership to cope with a new military and political situation.
The IS leadership has certainly taken seriously the possibility that Baghdadi could get killed (if he is not already dead) or captured in the near future in fighting with the Iraqi or Syrian armies, any of a number of militia groups in the two countries, or airstrikes by the USA, Russia or the Syrian regime. The group’s Shura Council, its supreme decision-making body, has taken the matter seriously enough that it nominated, earlier this month, a  successor to the self-styled ‘caliph’, one Abu Hafsa al-Mawsely, in the event that Baghdadi might become incapcitated.
But that decision, which was not unanimously agreed-upon in the Shura, has led to conflicts among IS commanders and fighters, some of whom refuse to accept Mawsely as a possible new leader. Consequently, the Shura Council has decided to reconvene – on an as-yet-unspecified date, and most likely in the Iraqi city of Mosul, to again discuss the matter of Baghdadi’s successor. The new meeting could nominate another candidate.
Not much is known about Mawsely, except that he is the deputy commander of IS’s ‘Nineveh province’, has a reputation for being one of the more brutal commanders in the group, is a senior legislator in the group’s governance structure, and has occupied several important military and administrative positions. He is based in the ancient city of Nineveh, on the outskirts of Mosul, the city which IS has occupied since 2014, and is now being forced out of by the Iraqi army and a number of militias, with support from the US-led coalition.
The IS Shura Council consists of a selected group of military leaders and legislators from its various ‘provinces’. It is expected that once the Shura Council finalises its decision, IS fighters will accept it and will be willing to pledge their allegiance to the new ‘caliph’ in the event of Baghdadi’s death or capture.
Baghdadi became the leader of IS’s precursor, al-Qa'ida in Iraq (AQI), in 2010. He was born near the Iraqi city of Samarra in 1971 , and obtained a PhD in Islamic studies from the Islamic University of Baghdad in 2013. Following the US invasion of Iraq in 2003, Baghdadi helped found the militant Jamaat Jaysh Ahl al-Sunnah wa al-Jamaah (JJASJ), which later joined the Mujahedin Shura Council (MSC) in 2006. The MSC became Islamic State of Iraq (ISI, also known as al-Qa'ida in Iraq) in 2006, with Baghdadi as head of its shari'ah committee and member of its senior consultative council. After a ten-month detention in the US prison Abu Ghaib and Camp Buca detention centres. Baghdadi was announced as ISI leader in May 2010, following the death of his predecessor Abu Omar Al-Baghdadi. He was the mastermind behind the formation of the Islamic State of Iraq and the Levant, and the establishment of the ‘Islamic State’ thereafter.
Reports indicate that Baghdadi had escaped from Mosul in February when the road to the west of the city was opened in the wake of a fierce attack launched by IS fighters. The group claims its fighters used seventeen suicide car bombs from Mosul and some units from Syria to temporarily clear the road out of the city it has held, uncontested, for about two years. Before he left the city, however, Baghdadi addressed supporters and fighters in what has been referred to as his ‘farewell speech’. According to a report from its members, the IS ‘caliph’ admitted that the group had been defeated in Mosul by US-backed Iraqi forces and militias, and urged his fighters to flee the urban areas and take refuge in the mountains.
While he was on his way out of the city, a US swat team ambushed a vehicle carrying a top IS commander who, it seems, the US military believed was Baghdadi or another senior IS leader. US troops in a helicopter exchanged gunfire  with IS fighters who were protecting the vehicle. IS sources reported that only one person was injured and nobody was killed in the exchange, but some news agencies reported that Baghdadi was in the convoy and that he had been seriously wounded. The US Pentagon, however, admits that it is unsure where the IS leader might be.
Baghdadi allegedly broke a months-long silence in May 2016 by releasing an audio message in which he once again urged Muslims from around the world to emigrate to the ‘caliphate’ that the group has proclaimed in areas of Syria and Iraq. The group’s dire military situation and its battle for survival has, however, meant that the flow of fighters and other ‘immigrants’ to its ‘state’ has slowed down considerably.
With IS’s Syrian capital, Raqqa, under attack by a range of forces in the past few months, the group began moving its governance structures from Raqqa to the eastern province of Deir al-Zour earlier this month. Its military commanders, bureaucracy and some fighters are now headquartered 140 kilometres southeast of Raqqa.
This follows a difficult month of March for IS in Raqqa, with US-backed Syrian Democratic Forces and other groups moving on the city, having captured the Tabqa airbase, and cutting off the road between al-Thawrah (where IS fighters had retreated to) and Raqqa. It is almost certain that Raqqa will fall to opposition groups in the next few months, necessitating the emergency measures undertaken by the IS leadership.
Read more... 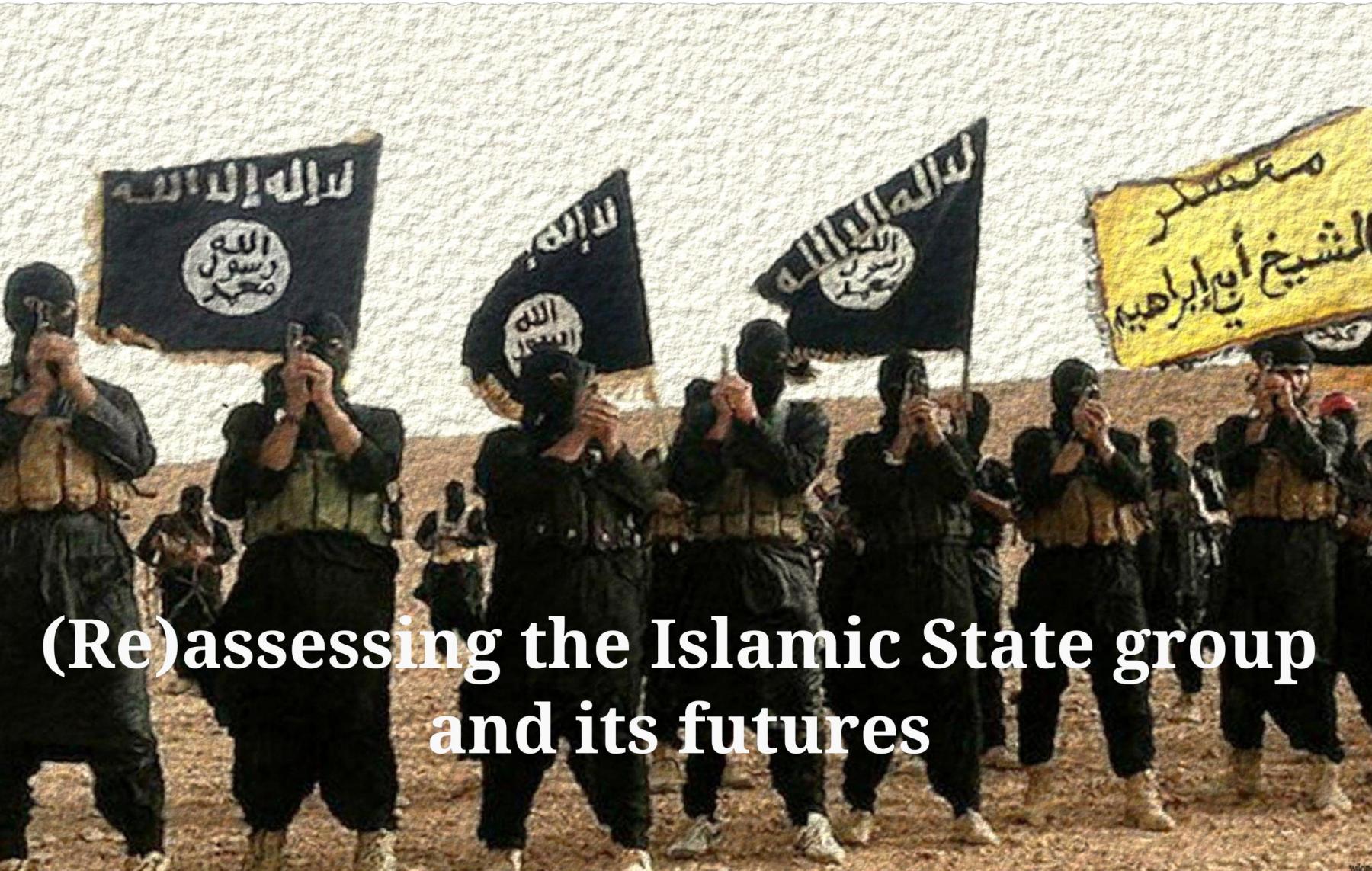 The Afro-Middle East Centre will, from 23 to 24 August 2016, host the annual AMEC Conference. This year's conference theme is '(Re)assessing the Islamic State group and its futures'. The conference will be held at the Premier Hotel, Pretoria. Spread over seven sessions, the conference will open with a keynote address by Minister David Mahlobo, Minister of State Security in the government of the Repubic of South Africa.

It is crucial for all those wishing to attend to confirm their attendance by 10 August 2016. For enquiries, please email This email address is being protected from spambots. You need JavaScript enabled to view it. or call 011 880-0525.