The Africa-Palestine Conference: Why South Africa must lead the way 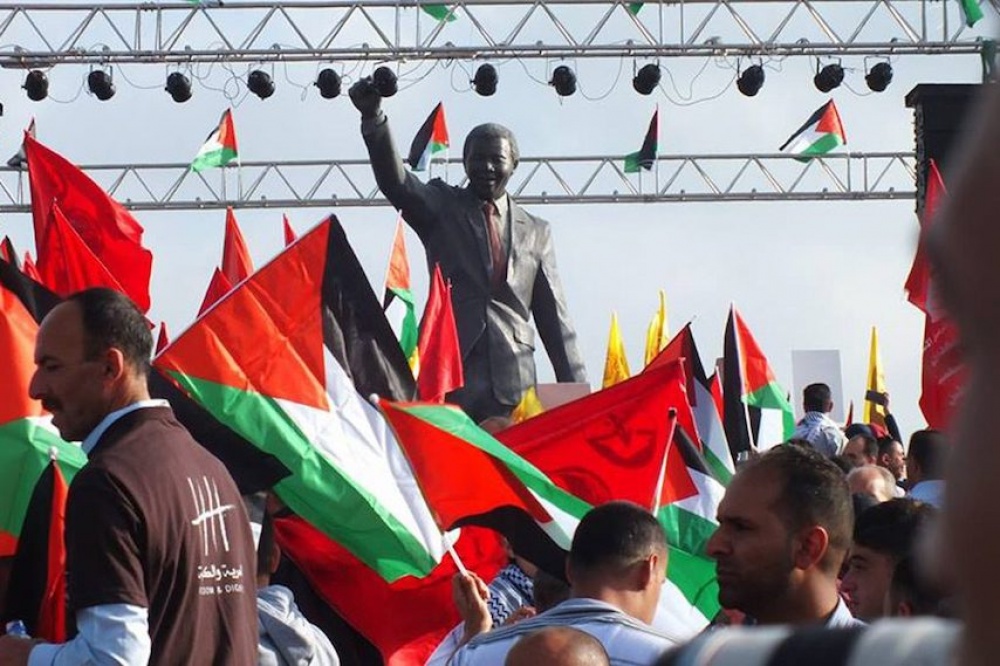 On 16 September, I visited South Africa, a country where many Palestinians have always felt welcomed, if not overwhelmed by the degree of genuine and meaningful solidarity. While having the honour to address many audiences in six major cities, I have also learned a great deal. An important and sobering lesson is that while apartheid laws can be dismissed in a day, economic apartheid and massive inequality can linger on for many years. Thanks to my interactions with many South African intellectuals, activists and ordinary folk, I learned not to romanticise the South African struggle, a crucial lesson for those of us fighting to end Israeli apartheid in Palestine.

My hosts at the Afro-Middle East Centre ensured that I met with diverse audiences, including top members of the African National Congress, the leadership of the country’s two major trade union federations, anti-apartheid scholars and activists, and a large number of students and other people throughout the country.

The main, obvious, conclusion from all these meetings and interactions is that South Africans are serious about their solidarity with Palestine, and that they see themselves as partners in the Palestinian struggle for justice and peace. While South Africans are always ready to take their solidarity with Palestine to a whole new level, however, there is a general feeling that decisive political moves can prove costly for South Africa.

True, the South African government has taken several steps in the right direction. On 14 May 2018, Pretoria recalled its ambassador to Israel, Sisa Ngombane, to protest the killing of hundreds of unarmed protesters taking part in the Great March of Return in besieged Gaza. On 5 April 2019, it began to actively downgrade its ties with Israel, in response to a call made by the ANC conference in December 2017.

While these steps are significant, South Africa is yet to take the kind of action that, when combined with others measures of international solidarity, could finally force Israel to dismantle its system of Apartheid in Palestine. The problem is not the lack of willingness nor that of diplomatic doublespeak. There is a growing, and justifiable, sense that Arab governments no longer see the liberation of Palestine as a common objective. While the Arab peoples remain committed in their support of Palestinians, Arab governments have fallen into warring camps and political divisions.

Yet, a top ANC leader told me that South Africa’s policy regarding Palestine is guided by the agendas of the Arab League and the Palestine Liberation Organization (PLO). Sadly, neither the Arab League nor the PLO are serving the roles they were entrusted with decades ago. The former is mired in divisions, and the latter has been effectively replaced by the provisional, factional Palestinian Authority in Ramallah. Using ineffectual organizations as a legal and moral frame of reference is hurting South Africa’s chances of converting its solidarity with Palestine into tangible political assets.

The other dilemma is that the African continent itself is no longer united regarding Palestine. Israel has successively driven a wedge between African countries, which, at one point, were united in their unconditional support of the Palestinian struggle against Israeli military occupation and Apartheid.

Israel’s successes in Africa, especially through the penetration of the Economic Community of West African States (ECOWAS), have made Tel Aviv a political player on the African continent. Boosted by the welcome he received from various African leaders, Israeli prime minister Benjamin Netanyahu had hoped to hold the ‘Israel-Africa Summit’ in October 2017. Thanks to the efforts of African countries like South Africa and Algeria, the conference was postponed indefinitely.

If Israel continues to score political victories while facing little resistance, however, it will eventually dominate the African continent. The absurdity of this goes beyond the struggle in Palestine. A continent that was ravaged by colonialism, racism and apartheid should not embrace the likes of Israel, the exemplification of the very ills that have cost Africa so dearly for hundreds of years.

In fact, the issue of solidarity with Palestine and the pressing need to block Israel’s scourges in Africa are intrinsically linked. In this very link, South Africa can find a way to reclaim its natural role as a vanguard against racism and apartheid everywhere.

My suggestion to the ANC was that South Africa should update its frame of reference, moving away from tired clichés of a defunct, two-state solution and such, to a whole new way of thinking. And it should not go about doing it alone; all of Africa and all Palestinians should be part of this effort.

I strongly believe that South Africa is ready to counter Israel’s efforts on the continent by initiating an Africa-Palestine Conference, a major gathering that aims to harness all the solidarity for the Palestinian people throughout all African countries. Whether such a conference is held under the auspices of the African Union (AU) or independently by a single member state (or even a political party), the gathering of like-minded African and Palestinian leaders, parliamentarians, scholars and civil society leaders can develop a new frame of reference, which South Africa, the African continent, and, in fact, the rest of the world can use as a guiding principle of new thinking on Palestine. Based on the call made by Palestinian civil society in 2005 to boycott, divest from and sanction Israel, the Palestinian people have been demanding and expecting this new thinking for at least fifteen years.

Those who might find the idea that Africa can lead the way on forming a new, global understanding on Palestine far-fetched need to remember that it was the Organization of African Unity’s resolution 77 (XII) of August 1975 that recognised and condemned the ‘organic link’ between ‘the racist regime in occupied Palestine and the racist regime in Zimbabwe and South Africa’. That very resolution served as a major frame of reference used in UN Resolution 3379 of November 1975, which determined that ‘Zionism is a form of racism and racial discrimination’.

Africa must reclaim its position as a global leader in the fight against racism and apartheid, and South Africa is very qualified to spearhead these efforts, because, after all, as iconic South African leader Nelson Mandela once said, ‘We all know too well that our freedom is incomplete without the freedom of the Palestinians.’

*Ramzy Baroud is a journalist, author and editor of The Palestine Chronicle. His most recent book is The Last Earth: A Palestinian Story, and his forthcoming book is These Chains Will Be Broken: Palestinian Stories of Struggle and Defiance in Israeli Prisons. Baroud has a Ph.D. in Palestine Studies from the University of Exeter. In September 2019, he spent ten days in South Africa on a book tour hosted by the Afro-Middle East Centre

Tweet
More in this category: PA Political circus: Why Abbas must hand over the PLO keys »
back to top