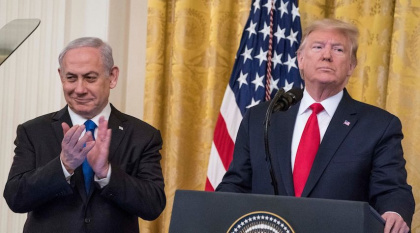 What you need to know about Trump's Annexation Plan

US President Donald Trump finally unveiled his ‘Middle East Peace Plan’ on Tuesday, 28 January 2020, during a media conference in Washington, as the Israeli prime minister, Benjamin Netanyahu, stood by his side.

The entire document, called ‘Peace to Prosperity: A Vision to Improve the Lives of the Palestinian and Israeli People’ consists of 181 pages, including a political plan, ‘The Trump Economic Plan’ (that Washington had already introduced last July, during a conference in Bahrain) and sections on security, border crossings, water, refugees, and Gaza. The economic plan vowed to set up a $50 billion fund to help revive the Palestinian economy, with Jordan, Egypt, and Israel also receiving shares of the proposed financial aid. Trump hopes to raise this money from Arab states, but little funding has thus far been pledged to turn the Bahrain plan into action.

Trump’s Washington announcement is considered the political component of what he and his advisers had termed the ‘Deal of the Century’. The plan creates a fictitious Palestinian state, which should be demilitarised and have no control over its own security, borders, waters, and foreign policy, ceding most of these to Israel. Such a ‘state’ would, in effect, have less power and control than the bantustans created by apartheid South Africa in the 1970s. Certainly, Lucas Mangope or General Oupa Gqozo, leaders of the Bophutatswana and Ciskei bantustans respectively, had more power over the territories they ostensibly controlled than the ‘government’ of Trump’s envisaged Palestinian ‘state’ would have.

According to the long-delayed plan, the USA will officially recognise Israel’s Jewish settlements in the occupied territories. All the settlements, housing around 600 000 settlers, are illegal under international law. The document is also an encouragement to Israel to seize as much Palestinian land as it wants before the plan is operationalised.

According to the document, ‘[Israel] will not have to uproot any settlements, and will incorporate the vast majority of Israeli settlements into contiguous Israeli territory. Israeli enclaves located inside contiguous Palestinian territory will become part of the State of Israel and be connected to it through an effective transportation system.’

No to Palestinian State

Although Trump’s plan refers to a ‘Realistic Two-State Solution’ and the creation of a Palestinian state, it delineates that entity as a series of individual enclaves connected by tunnels and bridges, and comprising only around nine per cent of what was British Mandate Palestine in 1947. It also imposes ‘limitations of certain sovereign powers in the Palestinian areas’ which strips the new entity of the powers, rights and duties of a normal state. The ill-defined Palestinian ‘state’ is also conditioned on the Palestinian leadership meeting a number of conditions, including the rejection of ‘terror’.

‘The State of Israel, the State of Palestine and the Arab countries will work together to counter Hezbollah, ISIS, Hamas... and all other terrorist groups and organizations, as well as other extremist groups,’ the document says. Clearly, ‘other extremist groups’ does not refer to Netanyahu’s Likud party or the myriad armed, violent racist Jewish settler groups that daily attack Palestinians, their livestock, farms and other possessions.

The ‘state’ will not be allowed to have any military or paramilitary capabilities, and will ‘not have the right to forge military, intelligence or security arrangements with any state or organization that adversely affect the State of Israel’s security, as determined by the State of Israel.’ The document contains a list of security capabilities that the Palestinian ‘state’ will not be allowed to have, including mines, heavy machine guns, and military intelligence. And, in the event that the Palestinians violate any of these prohibitions, Israel ‘will maintain the right to dismantle and destroy any facility’. Israel will also have the right to undertake any measures to ‘ensure that the State of Palestine remains demilitarized and non-threatening’ to Israel.

Yes to Jerusalem as capital – for Israel

The plan refers to Israel as a ‘good custodian of Jerusalem’, ‘unlike many previous powers that had ruled Jerusalem, and had destroyed the holy sites of other faiths.’ It also commends Israel ‘for safeguarding the religious sites of all and maintaining a religious status quo’, completely ignoring the reality of Israel’s destruction of and ongoing attacks on Christian and Muslim religious sites for the past seven decades.

Jerusalem, according to the plan, is envisioned as the ‘undivided’ capital of Israel, as already declared by the Trump administration on 6 December 2017. The plan does, however, propose to give Palestinians limited sovereignty over a few neighbourhoods that are adjacent to the Israeli apartheid wall that is built illegally in occupied East Jerusalem. ‘The sovereign capital of the State of Palestine should be in the section of East Jerusalem located in all areas east and north of the existing security barrier, including Kafr Aqab, the eastern part of Shuafat and Abu Dis,’ the document says, making clear that the Palestinian ‘state’ will not have control over any part of Jerusalem itself, especially not the old city of Jerusalem or the important religious sites such as the Al-Aqsa Mosque or the Church of the Holy Sepulchre. In a seemingly-generous concession, it suggests that the neighbourhoods identified ‘could be named Al Quds or another name as determined by the State of Palestine’. Essentially, Palestinians can have their capital in Jerusalem, as long as their Jerusalem is not in Jerusalem.

Yes to Gaza as part of Palestinian state, if...

With not a single reference in its 181 pages to the fourteen-year-long brutal Israeli siege on Gaza, and the various Israeli military onslaughts on the territory in that period, the document asserts that the people of Gaza ‘have suffered for too long under the repressive rule of Hamas’. It is irrelevant that Hamas was democratically elected by Palestinians in the West Bank and Gaza in 2006, but has been subjected, along with two million Palestinians, to the hermetic Israeli siege in the impoverished Gaza Strip.

Despite Palestinians in Gaza having ‘suffered for too long’, for Gaza to be included in any future ‘peace agreement’, it would have to be demilitarised and to fall under the control of the Palestinian Authority or any other party that Israel chooses to recognise.

Yes to security – for Israel

Israel’s security is a key thread running through the document, with one subheading clearly stating ‘The Primacy of Security’. Israel will, in fact, have ‘overriding security responsibility over the State of Palestine’, and will be responsible for ‘security at all international crossings into the State of Palestine’, meaning the new state will have no control over any of its borders. Israel will also ‘continue to maintain control over the airspace and electromagnetic spectrum west of the Jordan river’.

Even aspects of foreign relations of the Palestinian ‘state’, according to the document, will be the responsibility of Israel. ‘The State of Palestine will not have the right to forge military, intelligence or security arrangements with any state or organization that adversely affect the State of Israel’s security, as determined by the State of Israel,’ it asserts.

Another worrying section of the plan concerns Palestinian communities within Israel who live in an area referred to as the ‘Triangle’. Regarding these communities – in Kafr Qara, Ar’ara, Baha al-Gharbiyye, Umm al-Fahm, Qalansawe, Tayibe, Kafr Qasim, Tira, Kafr Bara and Jaljulia, the document ‘contemplates the possibility… that the borders of Israel will be redrawn such that the Triangle Communities become part of the State of Palestine’. The goal, then, is to politically relocate these communities of around 350 000 people, stripping the individuals of their Israeli citizenship and dumping them into the Palestinian bantustan. The plan is effectively proposing yet another way of helping to ethnically cleanse Israel of its Palestinian population.

Palestinians, seemingly without exception, have rejected the Trump plan. A number of Palestinian political formations the day before the plan’s unveiling to express their united opposition to it. This is not surprising, considering the provisions of the document. The reality, however, is that, in many respects, Trump’s plan only attempts to legitimate the status quo. Much of what the document talks about as a future ‘Vision’ is already the Palestinian reality.

The question now is how Palestinian groups will actualise their opposition as a resistance project that confronts not only the Trump Plan, but also the Israeli occupation and annexation project as a whole.