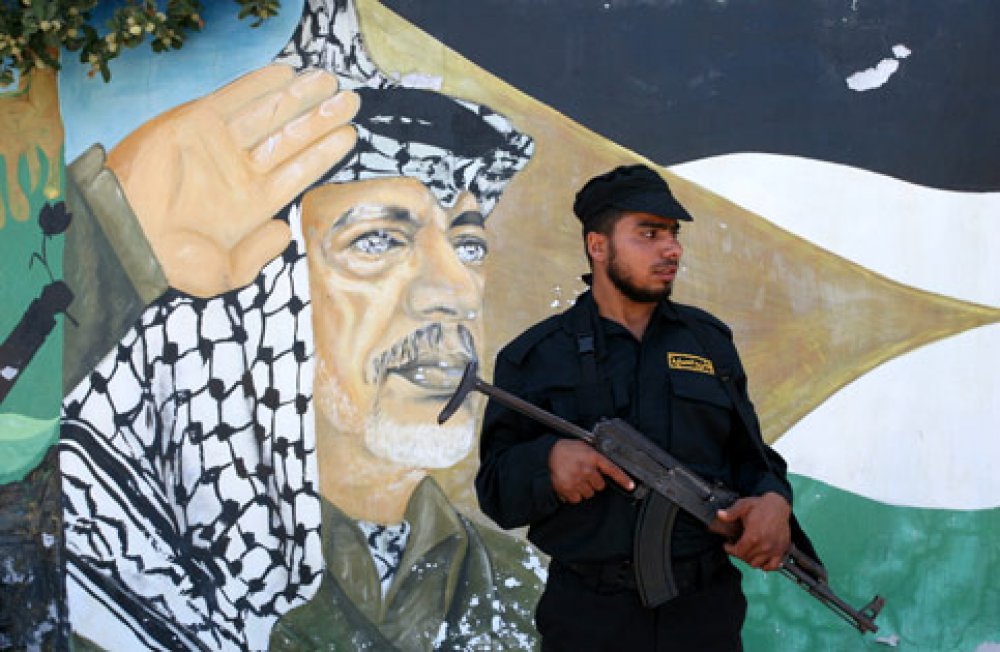 problems, which reduce the movement’s ability to represent the Palestinian people and impede its ability to work efficiently and achieve its aims and objectives. These are:

3. Decision making and its mechanisms;

4. Diminished role and effectiveness; and

The problem of representation

Officially, the PLO is ‘the sole and legitimate representative of the Palestinian people’, and that is the way it is dealt with on the world stage. In practice, though, that status has diminished over time amongst the Palestinians and the various factions of their liberation movement. With the rise of Islamism (particularly in the form of Hamas and Islamic Jihad) a quarter of a century ago, a large segment of the Palestinian people has no representation within the PLO as neither faction is part of the organisation.

Fatah has controlled the various PLO departments and PLO decision making since 1968. The Cairo Agreement of March 2005, the National Accord document of June 2006, the Makkah Accord of February 2007 and the reconciliation agreement of May 2011 all called for the reform and reactivation of the PLO, but none of these agreements have been implemented. Fatah’s leadership has not made any effort to include the Palestinians and factions that are not within the PLO. Indeed, the PLO has shrunk to fit Fatah, rather than having expanded to include the breadth of Palestinian political thought and action.

Apart from the exclusion of Hamas and Islamic Jihad in the PLO, the increase of PNC members to 800 by the addition of 400 members in 1996 came as a surprise. Disapproval was expressed not only by PLO factions but also some leaders within Fatah, including PNC head Salim al-Zaanoun. At the time, in order to fulfil the conditions of the Oslo Accord, the PLO leadership needed a majority of votes in the PNC to repeal most of the Palestinian National Charter, and thereby sign the death warrant for the objectives for which the PLO was established. The new additions would help in achieving that.

The PNC has not really been active since 1991, nor has it been able to renew its membership according to the by-laws of the PLO, which requires membership to be renewed every three years. The various sections of the PLO, which perform the functions of ministries in any other country, are either dead on their feet or shadows of their former selves. They are absent from the political arena and lack meaningful interaction with the Palestinian people. There are departments without budgets, without trained and active cadres, and without an effective programme consistent with the needs of a people fighting to liberate their land.

The PLO Research Centre, which had been a source of pride for the Palestinian people, has collapsed and the planning centre has been neglected. For example, in early 1970, the planning centre completed the ‘comprehensive strategic plan for the Palestinian revolution’ after a great deal of effort, and sent the top secret document to the PLO leadership in Amman. When no one called to discuss the details of the plan, Yousuf Alsayegh, the centre’s director, travelled to Amman to investigate. There he found a copy of the ‘top secret’ plan on a table in the leadership’s headquarters with tea and sugar splashed on the cover. He immediately returned to Beirut.

The last actual election for the PLO Executive Committee was held in 1996. According to the PLO’s internal by-laws, members of that committee should have lost their positions years ago. The PLO leadership faced a dilemma when six out of the eighteen Executive Committee (ExCo) members died, threatening the two-thirds quorum necessary for it to convene. The leadership was forced to convene a PNC meeting in August 2009 but without renewing or changing its membership.

FEDA formed an alliance with the People’s Party and the Democratic Front for the Liberation of Palestine for the 2006 Palestinian Legislative Council election. Although the alliance only won two seats out of 132, it has four members in the PLO Executive Committee. Hamas has no presence in the PLO at all, even though it won seventy-four seats in the 2006 ‘national’ election (including four seats for independent figures it had included in its lists) – fifty-six to fifty-nine per cent of the total.

The problem of decision making and its mechanisms

Historically, the president of the PLO imposed himself upon the decision making process inside the PLO. Yasser Arafat was accused by many – by his Fatah colleagues as well those from other factions and from independents – of having a monopoly over the decision making process. Power, especially concerning political, military and financial affairs, was concentrated in his hands.

This was compounded by the fact that legislative and monitoring institutions convened infrequently, weakening monitoring and accountability mechanisms and allowing the ExCo leadership to act as it liked. For example, the PNC held eleven sessions during the first ten years of its existence from 1964-1973; five sessions during the next ten years and four sessions between 1984 and 1993. If we consider the meetings held in 1996 and 2009 as real PNC sessions (despite the questions over membership issues and the fact that they were held on just one day each to push through changes to the National Charter and add members to the Executive Committee), then the PNC convened only two sessions in the nineteen years from 1994 to 2012. Decisions taken by the PNC have usually been taken by clapping hands, without any counting of votes.

As the Islamist trend gains popularity, and following the victory of Hamas in the 2006 elections, it is clear that decision making in the PLO lacks the presence of the faction that is, arguably, the most popular in the Palestinian arena. There was a Palestinian consensus – based on the Cairo Agreement of 2005 – to rebuild and reactivate the PLO, and there was near consensus that the membership of the PNC should be limited to around 300 members, with a 50:50 split between those based inside Palestine and those in exile. Members from inside Palestine should be elected and should include the 132 members of the Legislative Council (the Palestinian parliament).

The problem of diminished role and effect

Due to the institutional work of the PLO having diminished while the role of the Oslo-created Palestinian Authority increased, the organisation became a shadow of its former self. The Fatah leadership maintained the PLO because, officially (at the United Nations, for example), it is still regarded as the ‘sole legitimate representative of the Palestinian people’. Thus negotiations, agreements and diplomatic relations are all carried out under the PLO name. Practically, though, the PLO remains in intensive care, given only enough sustenance to keep it alive and to get its stamp of approval for the decisions and policies of its leadership and the leadership of the PA.

The problem of vision, path and reference

What reference is used by the PLO in developing its vision, path and red lines, or for setting its political agenda to ensure it is aligned with the strategic path upon on which it was founded? Is it the Palestinian National Charter; the ten-point programme; the Declaration of Independence; the Oslo Accord; the Arab Initiative or the Quartet Road Map?

Article Nine of the Palestinian National Charter – on which basis Fatah entered the PLO – states that ‘Armed struggle is the only way to liberate Palestine’; Article Nineteen asserts that, ‘The partition of Palestine in 1947 and the establishment of the state of Israel are entirely illegal, regardless of the passage of time’; and Article Twenty-One says that ‘The  Arab Palestinian people, expressing themselves by the armed Palestinian revolution, reject all solutions which are substitutes for the total liberation of Palestine’.

In 1974, the ten-point programme allowed the PLO to work incrementally and on partial solutions, and allowed it to establish a ‘Fighting Authority’ over any part of Palestine which was liberated.

In 1988, the Declaration of Independence gave implicit recognition to the partitioning of Palestine, and recognised UN resolutions, including General Assembly Resolution 242 which deals with the issue of Palestinian refugees.

Finally, in terms of the 1993 Oslo Accord, the PLO leadership recognised Israel’s ‘right’ to seventy-seven per cent of historic Palestine, ended the armed struggle and committed the organisation to the peace process.

Thus the Palestinian people find themselves with a real problem. If the point of reference to which the Palestinians should refer is the National Charter, then Hamas and Islamic Jihad – which are outside the PLO – are closer to the goals of the organisation than the factions which are its members and comprise its leadership.

The second problem relates to the standards that re regarded as the basis for new entrants into the PLO. If the organisation’s leadership responds to the conditions set by the Quartet and insists that factions applying to be members must commit to the agreements that the PLO had committed to (mainly the Oslo Accord and agreements that followed it), the PLO will limit its membership to factions and people who agree to abandon most of historic Palestine and to recognise Israel. Thus the PLO will not accept Hamas or Islamic Jihad as members.

For the PLO to exit from this crisis, its leadership must open the doors to all Palestinian factions, including Hamas and Islamic Jihad. It must take the initiative to reform the organisation and should prioritise arrangements related to the Palestinian Authority. The reactivation of the PLO will bring it back to its real power and role in representing the Palestinian people at home and abroad, and away from dependence on external factors. It will also restore the Palestinian Authority to its natural position as one of the tools available to the PLO to achieve Palestinian national goals.

* This article was originally published in Arabic by Aljazeera.net. It was translated into English by Middle East Monitor (MEMO)

Last modified on Wednesday, 18 February 2015 15:00
Tweet
More in this category: Gaza assault perpetuates the dehumanisation of Palestinians »
back to top