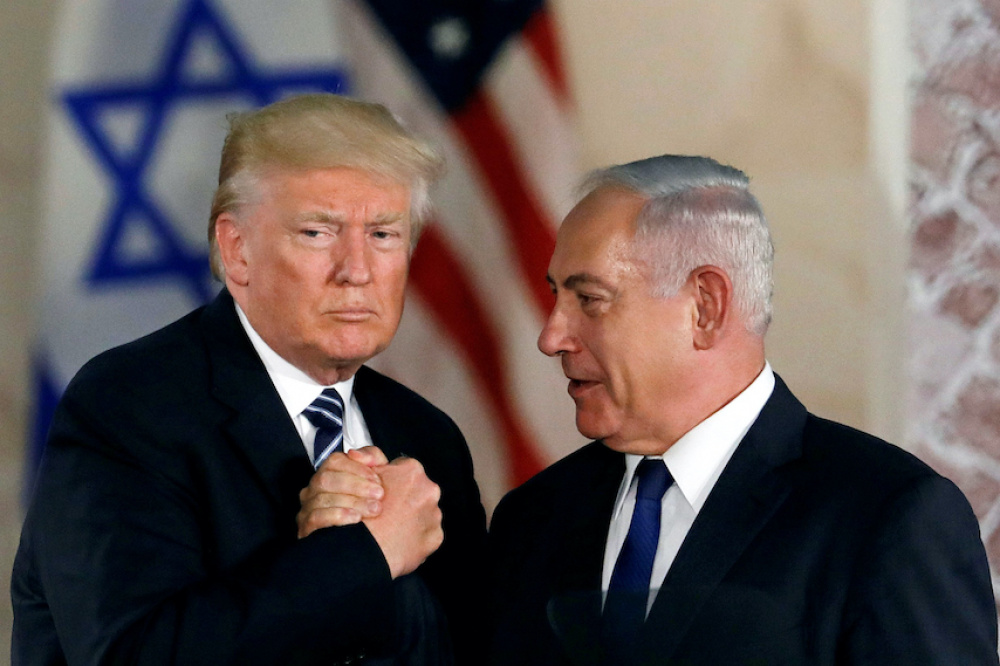 The US ambassador to Israel, David Friedman, is an ardent supporter of rapid Israeli expansion, and was handpicked for his role, not because of his diplomatic experience – he has none – but to help facilitate US support for Israel’s colonial expansion. In doing so, the USA violated international consensus on the issue, and reversed earlier US positions that perceived Israel’s illegal settlements as ‘obstacles to peace’.

Friedman was entrusted with communicating the ominous new American agenda regarding Israel’s illegal action in the occupied Palestinian territories and in the Syrian Golan Heights to Israelis. In June 2019 Friedman, rather clumsily, articulated a new American position on the illegal Jewish settlements when he said in an interview with the New York Times, ‘Israel has the right to retain some, but unlikely all, of the West Bank.’ The green light to Netanyahu was translated by Israel in January 2020 into an announcement that it intended to formally annex nearly a third of the West Bank within a few months.

The illegal annexation was set to take place on 1 July. Just prior to that date, Friedman resurfaced, this time with a less coded message: that Netanyahu’s annexation had the full backing of the US government. He told the Israeli newspaper Israel Hayom that Washington was preparing to acknowledge the Israeli move to apply sovereignty in ‘Judea and Samaria’, using the biblical term to refer to the West Bank. The expected massive annexation did not, however, materialise as grandly as expected. Instead, the Netanyahu government opted to cement its de facto annexation of Palestinian land by announcing plans to build more settlements, barring Palestinian farmers from reaching their land, and accelerating the policy of home demolitions.

Months before Biden was announced as the president-elect of the USA, Israel seemed to be preparing for the possibility that the Trump administration might not be re-elected. Certainly, while a Biden presidency is bound to remain unconditionally supportive of Israel, the new administration is likely to return to old policies pertaining to the ‘peace process’ and the ‘two-state solution’. Netanyahu has long been averse to such rhetoric as, in his view, such unnecessary delays will cost Israel precious time that could be invested in building yet more settlements. Politically, the mere discussion of a return to negotiations could, potentially, splinter Israel’s powerful yet fractious pro-settlement right-wing alliance.

Immediately that it became clear that Trump had lost the race, Netanyahu begrudgingly congratulated Biden. Even the Israeli leader’s belated acknowledgement of Trump’s defeat did not spare him the political ambush that awaited him. Many Knesset members attacked the Israeli prime minister for losing Israel’s bipartisan support in Washington by allying himself with the Republican Party and the Trump administration. Leading the charge was Israel’s opposition leader from Yesh Atid-Telem, Yair Lapid, who had previously criticised Netanyahu’s ‘Republican First’ approach to US politics. His views were shared by many Israelis in the Knesset and media.

Reversing course in Trump’s last weeks in office is not an easy task, especially as the Trump administration remains committed to help Israel achieve its objectives to the very end. On 19 November, US Secretary of State Mike Pompeo became the first top US official to visit an illegal Jewish settlement in the occupied West Bank. During his visit to a winery in the Psagot settlement, Pompeo gave Netanyahu more good news. He announced that, for the USA, products from illegal Jewish settlements could now be labelled ‘Made in Israel’, and that the global Boycott, Divestment and Sanctions (BDS) movement would be declared ‘anti-Semitic’ by the US State Department.

The latter announcement will give Israel the legal capital required to prosecute and silence any US civil society opposition to Israel’s illegal occupation. Israel is counting on the fact that Biden is unlikely to dare to contest or reverse such policies of Trump due to the sensitivity of the subject of anti-Semitism – whether real, alleged or imagined – in US politics. The same rationale applies to the settlement-building frenzy throughout occupied East Jerusalem and the West Bank.

On 20 November, Israeli authorities announced that eighty Palestinian families would be evicted from their homes in the neighbourhood of Sheikh Jarrah in East Jerusalem. These homes would be handed over to illegal Israeli Jewish settlers. The news of the mass evictions came only a few days after the government’s announcements that the illegal settlements of Givat Hamatos and Ramat Shlomo, both located in East Jerusalem, were set for major expansion. The massive development in Givat Hamatos, according to the Israeli group Peace Now, ‘will severely hamper the prospect of a two-State solution because it will ultimately block the possibility of territorial contiguity between East Jerusalem’ and major urban centres in the West Bank.

These announcements were strategically timed, as they carried the unmistakable political message that Israel does not intend to reverse its settlement policies, regardless of who occupies the White House. The coming weeks are likely to witness even more coordinated Israeli-US moves, with the Trump administration seeking to fulfil Netanyahu’s political wish list, thus leaving Biden with little political margin to manoeuvre, and denying his government the self-proclaimed, undeserved title of the ‘honest peace broker’.

* Dr Ramzy Baroud is a journalist and the Editor of The Palestine Chronicle, and is a Non-resident Senior Research Fellow at the Afro-Middle East Centre (AMEC)