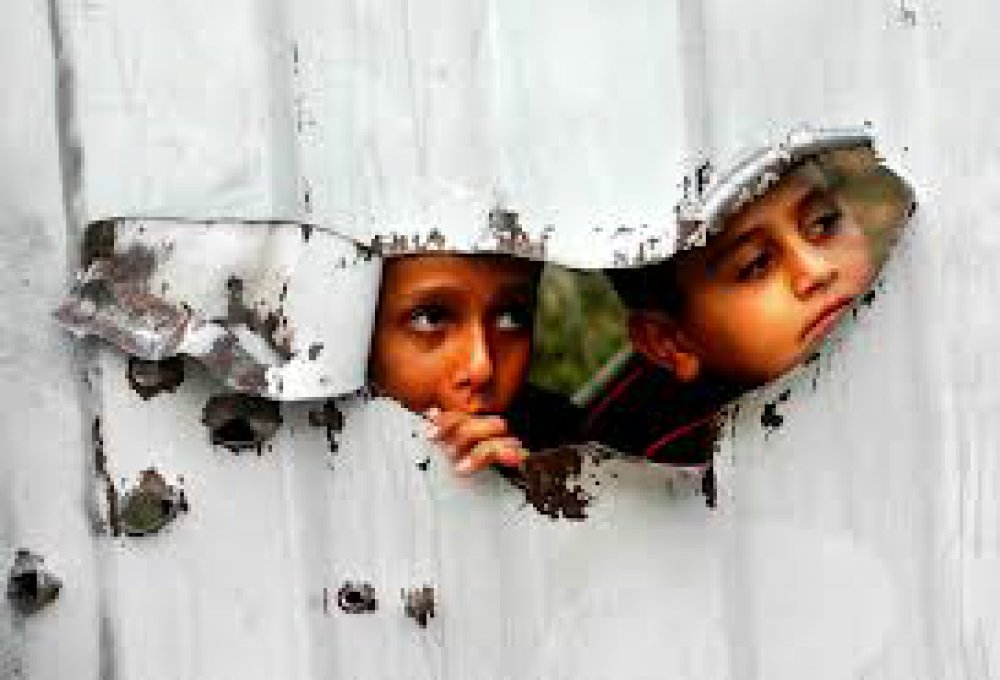 The numbers paint a brutally clear picture. For the 130 Palestinians killed in Israel’s assault on Gaza, mostly civilians and many of them children, four Israelis have been killed. As collective punishment of Palestinians for voting for Hamas in democratic elections in 2006, Palestinians in Gaza have been subjected to a brutal siege since 2007. Already ravaged by poverty and a dire humanitarian crisis as a result of the siege, Gaza is being further decimated by Israeli bombs.

The Israeli public supports the assault and Zionist lobbies around the world, including in South Africa, portray Israel as the victim. The Israel Defense Forces (IDF) have cast themselves as the victim fighting villainous ‘terrorists’ who are incapable of loving their own children. According to the IDF and the narrative fed to Israel’s supporters, Palestinians use their children only as human shields. The high death toll, the argument goes , is because of this, not because of Israel’s intense and often indiscriminate bombardment of the most densely populated area in the world, with 1.7 million people living on 360 square kilometres of land.

It must be clear that Israel broke the ceasefire and not, as Israel’s propaganda goes, the Palestinians. In an incursion into Gaza on Thursday, 8 November, an Israeli military force, including four tanks and a bulldozer, exchanged fire with members of the Popular Resistance Committees. Israeli fire killed a 13-year-old boy playing soccer. On Monday, 12 November, the Palestinians declared a ceasefire. Yet, Israel assassinated Hamas leader Ahmad Ja’bari two days later, setting in place a series of actions that escalated the conflict.

This brutal assault has been condoned, justified and supported in Israel and around the world by the repeated portrayal of Palestinians as less worthy of rights – and life – than Jewish Israelis. Had four Palestinians been killed for 130 Israelis, the global response would have been dramatically different. This latest assault is, in fact, part of a historic and systematic dehumanisation of Palestinians. To understand how this has gained international traction, it must be located within a post-9/11 world characterised by pervasive Islamophobia and anti-Arab sentiment.

The sentiment underpinning this dehumanisation is most powerfully captured in the famous Golda Meir quote often used to condone Israel’s actions: "Peace will come when the Arabs will love their children more than they hate us." Palestinians, according to this thinking, are incapable of love and know only hate. Thus, ‘we’ must do whatever is necessary to protect our children who we are able to love. Without the capacity to love and with only the capacity to hate, Palestinians’ humanity is eroded in people’s minds and the unjustifiable is justified.

Such dehumanisation is not new and can be traced to early Zionist settlers who, on arriving in Palestine, claimed it was ‘a land without people for a people without land’. The indigenous Palestinians were noted but, not being European like the Zionist settlers, they were not really human. The logic of European supremacy has since been supplanted by that of Jewish supremacy, which has played out in virulent ways in recent days.

Non-human Palestinians became terrorists or supporters of terrorists who welcomed this fate. The IDF’s official spokesperson tweeted vociferously about ‘terrorist sites’ bombed (not mentioning the loss of civilian lives) and, absurdly, suggested Palestinian parents were incapable of caring for their children. ‘Terrorist groups in Gaza fire rockets from residential areas. Would you raise your child in such a neighborhood?’ asked the tweet. Israel’s interior minister, Eli Yishai, said the goal of the operation was to ‘send Gaza back to the Middle Ages’. Mark Regev, spokesperson for Israel’s prime minister, seemed genuinely baffled when an Al Jazeera anchor suggested that Palestinian journalists targeted in an attack were still journalists, even though Palestinian. A Jerusalem Post journalist failed to understand the fuss around her wanting to write a story on the stress levels of pets subjected to sirens in the South of Israel. Pro-Israel lobby groups accused Palestinians of fabricating their plight and engaging in ‘Pallywood’. Some lamented: "Our editor chose to use the heartrending photo of a father holding the corpse of his eleven-month-old child. Was this the only infant to die over the past year?"

A tiny minority of Jewish Israelis, appalled by their government’s action, have taken to the streets to voice their outrage, but the simple issue remains. If, even for a moment, the death of a Jewish Israeli child jars people more than the death of a Palestinian child, the dehumanisation project has succeeded!

Last modified on Wednesday, 18 February 2015 12:08
Tweet
More in this category: Young Men Should Not Die in Democracies: South Africa, Israel and Apartheid »
back to top