The SACBC delegation witnessed a humanitarian disaster of unparalleled proportions. There are now almost 500 000 displaced people in the south of the province, with about 150 000 in the city of Pemba itself, almost doubling the city’s normal population of 200 000. UNHCR provides humanitarian assistance (including food) to less than 10% of the displaced. At the end of November it announced that humanitarian assistance would be stopped due to shortage of funds. In Nangume Village, Ancwabe District, the delegation was told by displaced that up to nine people are buried daily, who died from starvation.

The group encountered almost nobody who supported the view that the war in Cabo Delgado is an Islamic insurgency with the aim of establishing an Islamic state. Almost everyone spoken to agrees that the war is about multinational corporations gaining control of the Province’s mineral and gas resources, by depopulating the coastal areas. All land in Mozambique is state owned – use of the land and permission to occupy is conferred by a document known as a “DUAT”. It was confirmed that displaced arriving in the south of the Province have their DUAT’s cancelled, making it impossible for them to return once the violence ceases. In Ancwabe the delegation was told that displaced are issued with a DUAT for the area and are given a new plot of land to cultivate as they “probably would not return to where they came from”. And according to reports received, the supposedly abandoned town of Mocimboa da Praia is now seeing an influx of developers (many from the United Arab Emirates) who are surveying the town with a view to reconstructing the town and developing the port. There are also reports of petrol and gas companies surveying the coast of Zambezia province, without any consultation with local communities. Local people there are saying that it is only a matter of time before war erupts there, like in Cabo Delgado, to drive them off their land as well.

The crisis is spilling over into other areas. There are already more than 40 000 in Nampula Province (more than 300 km away) with 20 000 in the city of Nampula itself.

Before the attacks, Muidumbe had  a population of 79 000, spread over 26 villages. The entire district has been depopulated. Everyone has fled – more than 300 km on foot, to reach Pemba. The journey took up to two weeks, with those fleeing traversing the bush without food or water. The Catholic Church has arranged for the survivors to meet from Wednesday to Saturday for prayers, and on Sundays for Mass at Good Shepherd Mission. Most stay with friends or relatives in Pemba. Most are survivors of the brutal attacks in Muidumbe (where the entire Catholic Mission, Convent, Priests’ house and community radio station were burned to the ground. The damage is incalculable – more than 100 years old, it is the second oldest Mission in Cabo Delgado. 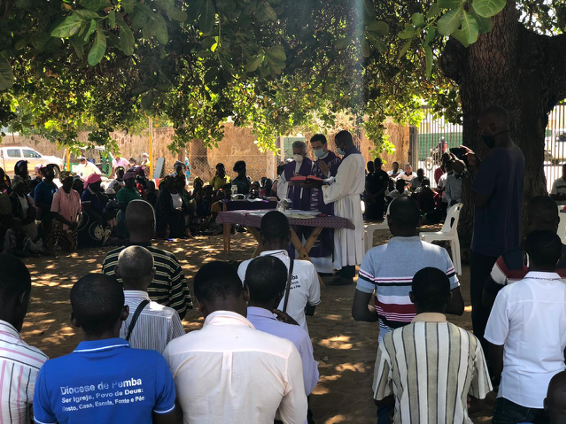 Mass being celebrated under a cashew tree for the Muidumbe community refugees at Good Shepherd Mission. 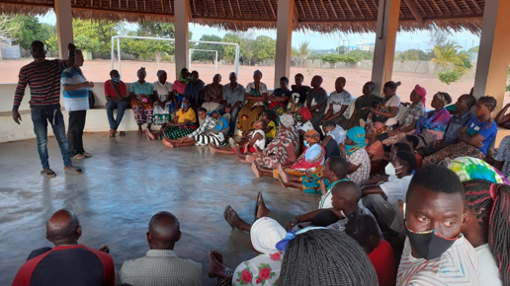 Survivors from the massacres at Muidumbe and Xitaxe attending Wednesday afternoon prayers at Good Shepherd Mission.

One of the poorest neighbourhoods in Pemba, and the site where the influx of refugees arrived by boat. Many stayed in the neighbourhood, constructing reed shacks for themselves.

More than 390 households (with 7 to 8 members each)  of displaced have been registered in Nangume village, Ancwabe district, the place visited by the delegation. Local people confirm that up to 9 funerals are conducted daily for people who died of starvation. There is also cholera. Those registered by the local government are provided with a monthly food parcel by Caritas. However, many new displaces arrive daily, who do not receive anything due to insufficient supplies. 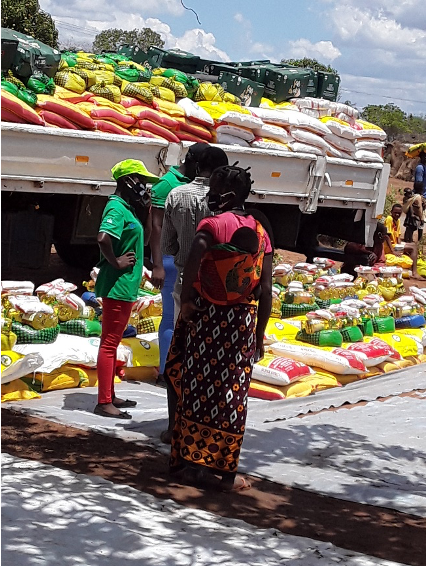 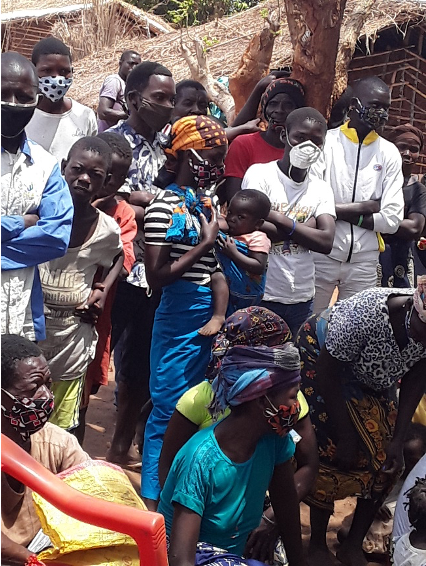 There are seven camps for displaced in the Metuge District. As seen in the pictures below, no accommodation is provided. Displaced construct shelters from grass for themselves. Some do not even have this, and sleep in the sand under mosquito nets. The delegation spoke to displaced who have been living in these conditions for more than seven months. 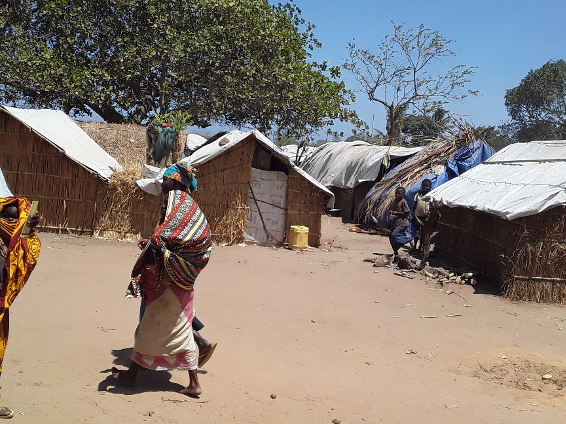 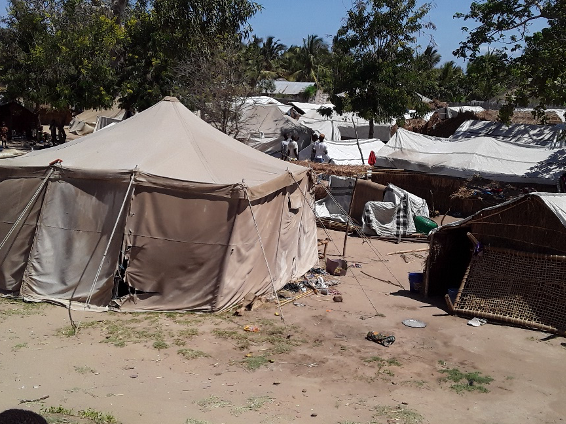 It appears that South African-made armoured personnel carriers (APCs) have made their way to Mozambique as part of efforts to control the violent insurgency in the northern Cabo Delgado province.

A photo emerged online in late November showing a Marauder at what appears to be a port in Mozambique. It was fitted with a turret-mounted machinegun. According to local media, the type will be used in the fight against insurgents.

Moz 24 Horas reported that five Marauders arrived in November to reinforce landward operations against Islamist insurgents in the north of the country. The publication also reported that two light tanks had been delivered from South Africa.

The 17 tonne Marauder, manufactured by Paramount Group, can accommodate up to 12 personnel including two crew, and offers STANAG Level 3 protection. Its hull can withstand a direct explosion of 8 kg of TNT. Other sub-Saharan African operators include the Republic of Congo and Malawi. Elsewhere, Paramount has sold Marauders to Mali, Nigeria, Kazakhstan (as the Arlan) and Singapore (as the Belrex).

When contacted for comment on the Mozambican Marauders, a Paramount spokesperson told defenceWeb that: “As you are aware, companies that operate within the defence and aerospace industries are restricted from commenting or providing details of contracts due to strict confidentiality agreements and issues of national security. Any comments on such issues would be very irresponsible and could compromise the national security of countries and put the lives of many security personnel and civilians at risk. Any queries relating to such details need to be addressed to the relevant government. It is also important to note that we provide solutions and supply equipment to sovereign governments only.”

South African companies have been supplying equipment and expertise to help the Mozambican government fight the Cabo Delgado insurgency, with Dyck Advisory Group leading the charge. They have been using aircraft provided by Ultimate Aviation, amongst others. Dyck Advisory Group lost a Gazelle helicopter in April, which was apparently shot down by insurgents it was targeting at the time – a Bat Hawk microlight crashed in June in an apparent accident.

Various aircraft have been observed in Mozambique supporting private military contractors, including a UH-1 Huey, Cessna Caravan, Bell Long Ranger, Diamond DA 42 and CADG Helix. The airpower has helped fight the insurgency but was not enough to stop insurgents capturing Mocimboa da Praia in August.

The South African government has approved the transfer of weaponry to Mozambique, but has not disclosed what or how much. In June the National Conventional Arms Control Committee (NCACC) told Parliament that South Africa supplied weapons to Mozambique but did not disclose any further details. “We couldn’t say no to Mozambique as it is a legitimate government under attack by terrorists,” committee chair, Jackson Mthembu, Minister in the Presidency said, referring to the insurgency in Cabo Delgado province 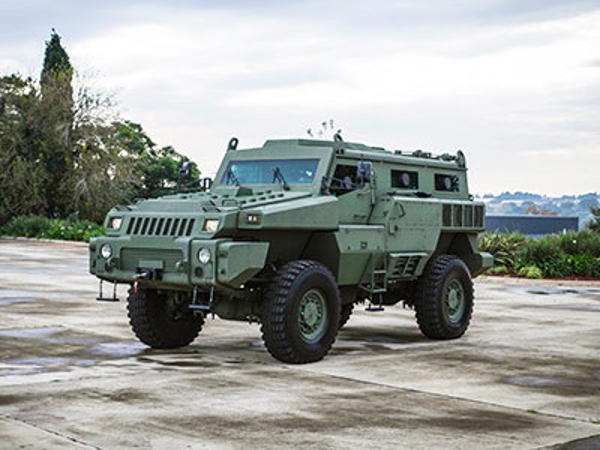 Last modified on Tuesday, 08 December 2020 22:15
Tweet
More in this category: [8 January 2021] The Denis Hurley Peace Institute: reports on Northern Mozambique »
back to top