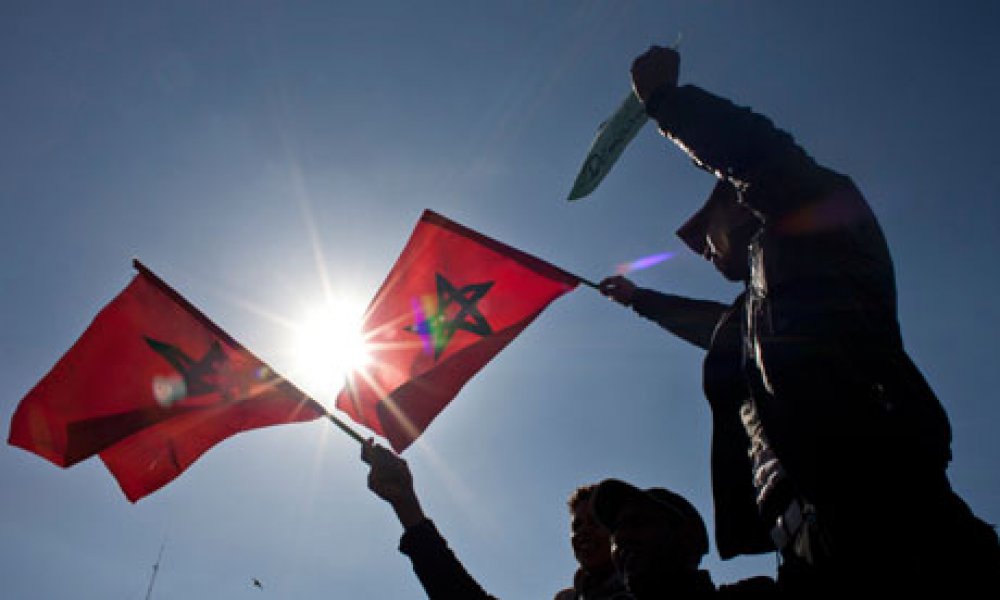 During these demonstrations various questions emerged as to the possibilities of the movement being able to achieve extensive change. Beyond the debate raging between those asserting the potential for the movement’s success and those who warn of Moroccan exceptionalism, the path taken by the February 20 Movement’s demonstrations and the nature of their demands complicate the observer’s task of hypothesising about the prospects for change in Morocco.The starting point in a discussion about change in Morocco must, on one hand, take into consideration the forces calling for such a change, and, on the other hand, examine the realities facing the February 20 Movement

The forces of change: Beyond ideology

There are three main groupings calling for change in Morocco:

These three groupings have called for political change for decades, but have not succeeded in transforming these calls into any substantial counter-force to challenge the regime. Rather, they have remained confined to activities in clubs and university campuses, sporadically taking action on the street to express solidarity with Arab and Islamic issues. This highlights the significance of the February 20 Movement that called on Moroccans to take to the streets to demand change.

An important question is: how did this movement emerge and what constitutes its identity?

In a paper published by the February 20 Movement on 16 February 2011, the movement presented itself as a Moroccan youth movement independent of all political organisations and parties, and bearing great love for their country – a love that has driven them to demand change in order to bring about freedom, democracy, dignity and social justice. The movement also defines itself as a natural extension of Moroccan protest movements; as an expression of the youths’ online interaction with these forces an interaction that has found expression through the formation of virtual groups on Facebook, including the group ‘Moroccans in dialogue with the King’.

On 27 January 2011, before the formation of the February 20 Movement had been announced, ‘virtual’ youth groups initiated a call for a day of peaceful demonstrations, to take place on 20 February, in various Moroccan cities. This loose coalition called itself ‘Freedom and Democracy Now’, and based its call on a platform of five points:

Freedom and Democracy Now defined itself as an independent and democratic Moroccan movement that reflects the aspirations of all who believe that they belong to the land and its geographic and cultural diversity, and who value and hold sacrosanct the rights of freedom, diversity and the desire to live together. It called on the king to keep apace with global changes by minimising the role of those who take an outdated and narrow security-driven and militaristic approach to governance.

In the context of the call for the demonstrations to take place on 20 February, two ‘virtual’ youth movements emerged and joined forces with Freedom and Democracy Now. These were the ‘People Want Change’ and ‘Intifada for Dignity’ movements. The three movements issued a joint communiqué on 15 February 2011, and this new coalition called itself the ‘February 20 Youth Groups’. It outlined its approach as follows:

The day after the joint statement was issued, the groups joined forces to become one movement. Thus, the name ‘February 20 Youth Movement’ appeared for the first time in the communiqué of 16 February, that outlined the following demands:

What led a group of virtual youth movements to transform, in record time, into the February 20 Youth Movement? The main reason lies in the immense support elicited by the call, on 27 January, by Freedom and Democracy Now. For example, as of 2 February the ‘Moroccan Rights Movement’, that includes twenty rights and civil society organisations, rushed to express their support. Within two weeks, this movement called for:

In addition to the Moroccan Rights Movement, the Justice and Charity organisation joined in calling on Moroccans to take to the streets in demonstrations, and authorising its youth sector to choose the methods and forms that it deemed appropriate for their participation in the demonstrations on 20 February.

Questions have been raised about who was behind the February 20 Youth Movement: are they independent of the country’s political parties, as stated in their statement issued on 16 February, or are they an extension of the Moroccan groups who have been demanding change, whether Islamist, leftist, or Amazigh? Regardless of the answer, given the following two factors, we cannot separate the February 20 Youth Movement from those forces that support it:

Given this second factor, it has been necessary to emphasise the value of the February 20 Youth Movement in being able to bridge the divide between the different political forces that have been demanding change, especially the divide between the Justice and Charity organization and the radical left. All of these respected the level of the agreed-upon demands such as the demand for a constitutional monarchy through the adoption of a democratic constitution, and the demand to combat tyranny and corruption. Activists from opposition forces have put aside their differing ideological positions; there is no longer the demand for the establishment of an Islamic or socialist state, but instead there is an emphasis on the establishment of a modern civil state that will enshrine dignity and citizenship.

It is without question that the dynamics that emerged in the wake of the February 20 Movement have drawn on what took place in Tunisia and Egypt. This dynamic has led the monarchy to take several reform measures, including: workshops on constitutional reforms that came about as a result of the King's address to the nation on 9 March; the formation of an advisory committee to amend the constitution; and a set of measures and actions to consolidate mechanisms for the exercising of individual and collective freedoms, such as the conversion of the the Royal Advisory Council for Human Rights to the National Council for Human Rights, the conversion of the Office of the Ombudsman to the al-Waseet(moderate) institution, and the creation of a ministerial commission for human rights. Further actions were also taken, meeting the demands of the February 20 Youth Movement, such as the release of some political prisoners, and the prosecution of some of the people accused of stealing public money.

The monarchy in the balance

A question that continues to be asked about the prospects for change in Morocco is: will change extend to the transformation of the country into a constitutional monarchy, or will it be limited to reformist logic, leaving the monarchy largely untouched?

As for internal factors, particularly in light of the Tunisian and Egyptian experiences, decision-makers in Morocco are aware that the demands of the Moroccan people are not solely of an economic and social nature, but also of a political nature. Since the ascension of Mohammed VI to the throne in 1999, he has prioritised social matters, as can be evidenced in the ‘National Initiative for Human Development’ project that he announced on 18 May 2005. The revolutions of Tunisia and Egypt have made Moroccan decision-makers pay increasing attention to the existence of a strong demand for democracy from sectors of society that are not necessarily demanding bread and work. In other words, while the poor and marginalised groups that suffer from social exclusion demand improvement in their social conditions, many segments within the middle class suffer from an exclusion of a different kind – political exclusion – and are demanding their right to participate in decision-making processes through the establishment of a democratic political system.

However, there are many forces that come up against those driving change,including:

It seems that factors inhibiting change are greater than those driving it, especially since the February 20 Youth Movement has not been able to convert the momentum from the street into a counter-authority challenging the regime. Furthermore, opposition forces supporting the February 20 Youth Movement have not succeeded in transforming their radical positions into a strategic plan and programme of action that can shift the balance of power in their favour. In this situation, and without ignoring important internal factors, the process of change seems to be governed by external factors. Such a situation will undoubtedly affect the executive monarchy system, but without actually and fully transforming it into a constitutional monarchy. In other words, through the constitutional review process now under-way, Morocco will witness a shift to a more balanced monarchy, but the process will not affect the central role of the institution of the monarchy.

* Mohamed Darif is a professor of political science at Hassan II University, Morocco

Last modified on Wednesday, 18 February 2015 11:42
Tweet
More in this category: Popular upsurge and political pacts in Morocco »
back to top