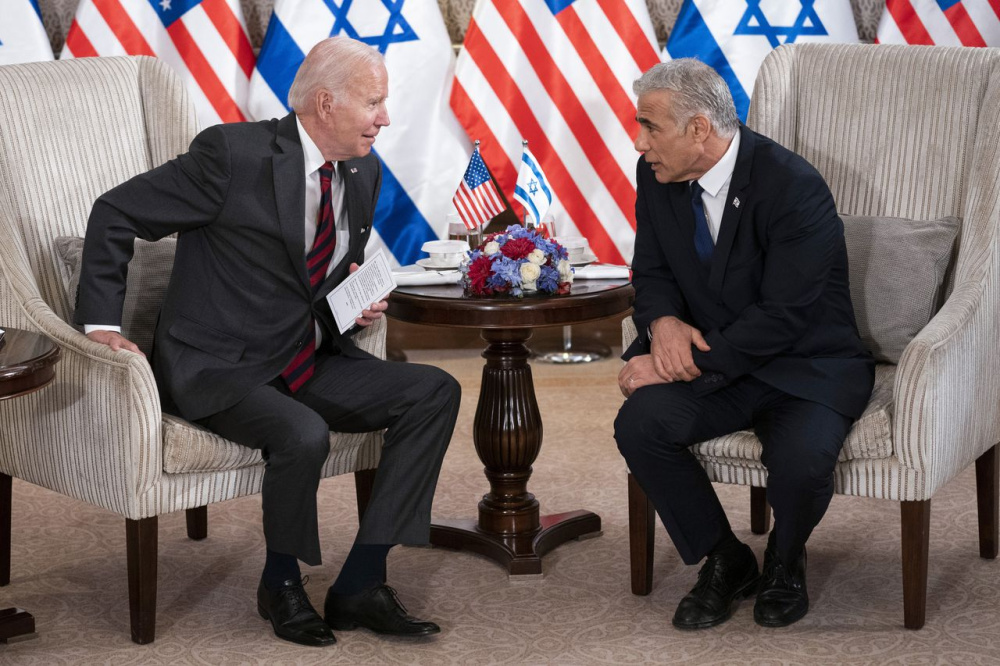 Many people are questioning the value (and even the purpose) of US president Joe Biden’s visit  to the Middle East last week. While the trip’s objective was obfuscated by the White House, one thing is clear: while some part of the visit was about energy security for the West, much of it was about Israel.

It was clear beforehand that Biden wanted to repair the damaged relationship between his administration and Saudi crown prince (and effective ruler) Mohammed bin Salman (or MbS), in order to get the Saudis to increase their oil production and ease high energy prices in the US and Europe. But White House spokespersons sought to downplay the notion of a US president begging at the Saudi palace and said the trip was about normalising relations between Israel and Arab states, and particularly, Saudi Arabia. They hoped this would seem like a strong reason for Americans, given historical support for Israel in the US and within his Democratic Party. It was a miscalculation, but that the trip had a lot to do with Israel was true.

The more substantial stops on the tour were Israel and Saudi Arabia, with a brief visit to the Occupied Palestinian Territory.

In Israel, Biden did not mention anything about the expanding settlement project – illegal under international law and a violation of US policy. He reiterated support for Donald Trump’s relocation of the US embassy to Jerusalem, which is not recognised as Israel’s capital under international law; made no comment about reopening the US consulate that had served Palestinians before Trump shut it down; pledged to continue the annual $3,8 billion military aid package to Israel; condemned Iran for wanting to develop nuclear weapons (Iran doesn’t; Israel is the only Middle East state with nuclear weapons); and signed an anti-Iran declaration with Israeli prime minister Yair Lapid.

In Ramallah, after a brief meeting with Palestinian Authority president Mahmoud Abbas, Biden declared that “the ground was not ripe” for peace talks between Palestinians and Israelis, pronouncing his verdict that Palestinians should remain under perpetual Israeli military rule in an apartheid state. That visit might as well not have happened; the Palestinians, to Biden, do not exist.

Though not the first US president to do so, Biden symbolically flew from Tel Aviv to Riyadh in Saudi Arabia to hint at a possible new relationship between the two capitals.

In Saudi Arabia, Biden met the heads of the Gulf Cooperation Council states (Bahrain, Kuwait, Oman, Qatar, Saudi Arabia, and the UAE) and of Jordan, Egypt and Iraq. He had two objectives here: mainly to convince MbS to increase oil production (which he failed to do), and to nudge Saudi Arabia towards normalised diplomatic relations with Israel (which he failed to do, except to get the Saudis to open their airspace to Israeli flights, itself, admittedly, an advance in Israeli-Saudi relations). It was an interesting image of a US president, cap-in-hand, asking the Saudis for help, and a more spectacular brushing off of the request by the latter.

In his presidential campaign, Biden had pledged to make MbS accountable for the murder of Saudi journalist Jamal Khashoggi, which, the CIA said, the prince had a role in, and to make Saudi Arabia a “pariah state” for its human rights abuses. He did raise Khashoggi with MbS but was brushed off, as he would be, considering he was doing the begging. And this effectively has closed the Khashoggi matter for the US.

His attempt to portray the visit as building an anti-Iran alliance also fell flat. The Iranians (legitimately) accused him of spreading “Iranophobia”; the Saudis and Emiratis were not interested because they are in separate processes normalising their own relations with Iran and would prefer to do it without US interference; Egypt and Kuwait are quite happy nurturing their own relations with Iran on their terms. Only Lapid was thrilled with the anti-Iran rhetoric.

Biden also tacked on a promise that the US will not “walk away [from the Middle East] and leave a vacuum to be filled by China, Russia, or Iran”. Did he, perhaps, miss the fact that the states in the region (including Israel) have started “walking away” from the US, strengthening relations with Russia and China, attempting to restore relations with Iran (except Israel), and no longer believing in the US as a protector or patron?

Last modified on Tuesday, 26 July 2022 16:06
Tweet
More in this category: The web of relations within the Israel-India-USA-UAE (I2-U2) alliance »
back to top