The Arab World and the priorities of Russian foreign policy 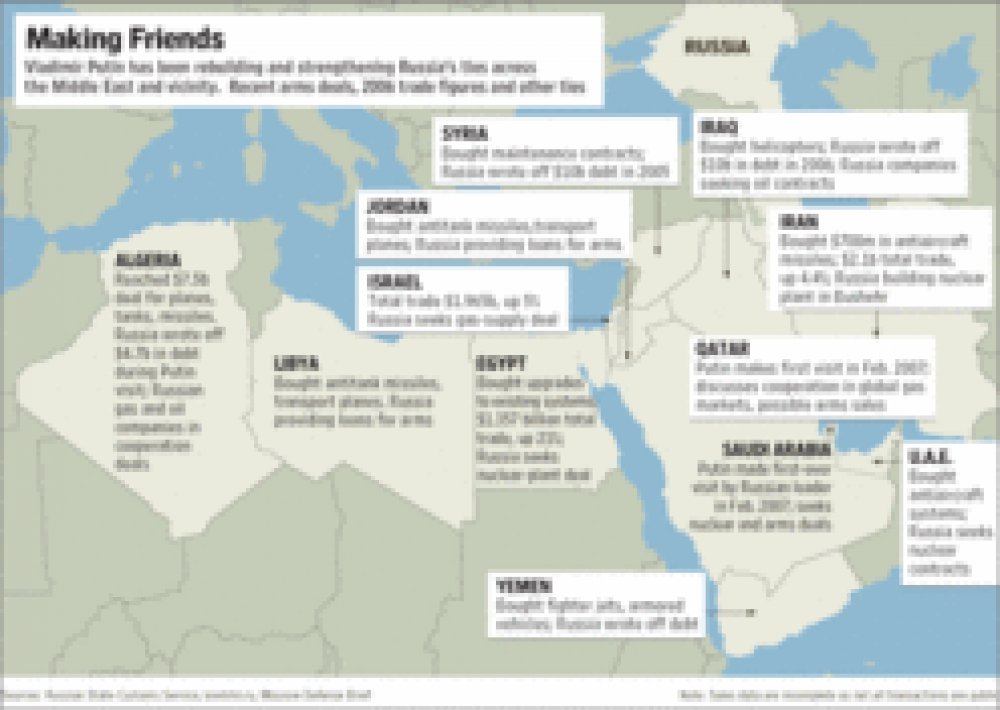 Russian-Arab relations, although having strategic significance for both parties, do not hold the same level of strategic value for either. Furthermore, such relations are only the third or fourth priority for each of them. Clearly, Russia gives priority to its relations with America and Europe. At the Arab level, most regimes, except for Syria, prioritise their relations with the US, with some interested in relations with Europe. Russia is thus located at a tertiary level, together with China. With the strengthening of its relations with Iran, Turkey and a number of Third World countries, Syria's recent foreign policy priority is the Middle East region. At the international level, it is most anxious to develop relations with Russia. The extent of success regarding this endeavour, however, depends on Russia's position, and Syria's relations with Russia have not succeeded in reaching a strategic level. Oscillating according to circumstances, Syria-Russia relations are limited to the tactical level, to balance Russia-US and Russia-Israel relations.

Arab resistance movements, opposition parties, and Arab public opinion in general had placed some hope, at some points during the presidency of Vladimir Putin, on the possible development of strategic relations with Russia and on gaining Russia as a strategic ally. However, these expectations began to retreat from the point they had reached when the Georgian-Russian crisis had erupted. During that crisis, these forces sympathised with Russia, and hoped to exploit the heightened contradictions in Israel-Russia and Russia-US relations. Arab groups hoped that these difficulties would lead to the development of strategic relations with Russia on the basis of both parties having common foes. These expectations began to fade with the haste with which both America and Israel covered up the crisis – at Georgia's expense and to Russia's benefit.

From the second term of the George W. Bush presidency, and especially since Barack Obama assumed the US presidency, the US abandoned implementation of its Missile Shield Project, and watched quietly while Russia re-captured a number of positions in former Soviet Union countries, and even in some countries belonging to the Warsaw Pact. Recently, the US remained silent when Moscow and Kiev signed a deal in terms of which Russia's naval presence in the Crimea would be extended for an additional 25 years after it expires in 2017.

The general political and economic deterioration of US influence led to the emergence of positive US-Russia relations, while the US military crises in Iraq, Afghanistan and Pakistan added to the need for US-Russia rapprochement. More importantly, the Obama administration's current top strategic priority is to mobilise support for the imposition of severe sanctions against Iran. Additionally, it is preoccupied with the effects of the success of the G20 Summit on managing the US-global financial crisis.

With such a balance of forces, and considering these strategic priorities, the US needs to reach accommodation with both Russia and China. Initially, Russia sought to prevent NATO's advance to its backyard in Europe and Asia. It also sought to stop the Missile Shield Project in Poland and the Czech Republic. Now, Russian interests have moved beyond halting NATO's advance to restoring its influence and role in the region, which affects its national security. Observers suggest that Russia's most recent ambition is to reach an understanding with the US which would establish some form of global dual US-Russian system and balance in world politics.

This scenario explains the change in a number of Russian positions in favour of forging better relations with and a stronger agreement with the US – as, for example, on the issue of sanctions against Iran. This was also indicated by the bilateral paper submitted by Russia to the Secretariat of the Arab League at the Nuclear Non-Proliferation Summit.

Analysts also sense a cooling in Russia-China relations. The visit of Russian President Dimitry Medvedev to Syria, and his meeting with the head of Hamas' political bureau, Khaled Mesh'al, is seen as contradictory to the above context. It is indicative of a challenge to Israel greater than on any previous occasion. It is also not expected that the US will look favourably on this, especially if it involves military agreements with Syria and a sophisticated weapons deal. (The US might accept such a weapons deal, however, if it assists it to rally more support in its quest for imposing sanctions on Iran.)

Therefore, observers believe that the future of Russia-Arab relations in general, and Russian relations with the resistance movements who oppose the US and Zionist occupation in particular, will depend on the balance of US-Russia and Russia-Europe relations. This is normal for a Russia that has re-emerged, at the hands of Putin, as a great power. Russia has reversed the period of collapse and deterioration that followed the disintegration of the Soviet Union and the fall of the Warsaw Pact.

However, commentators suggest that the US and the West will not keep silent for long. The return of Russia to the position of a great power that stands, militarily, on an equal footing with the West, and shares in the leadership of the world,will not sit easily with US strategic objectives. This may result in a conflict and may lead to the search for a new balance in a new relationship. Some believe that the US will regret the strategic priorities established by the George W. Bush administration, and – to a lesser extent – the earlier administration of Bill Clinton. These administrations, giving priority to their "Middle East Policy", allowed Russia to emerge from the state of deterioration that it had reached in the 1990s. By leaving Soviet arms, scientific and technological expertise in the hands of post-Soviet Union Russia, the victory of the US and the West over the Soviet Union was incomplete. It was shaky and temporary as long as nuclear weapons and sophisticated missile programs remained with Russia.

We now face a new reality: the return of Russia as a strong, cohesive and developed superpower, while US power has been eroded at multiple levels and in many fields. Commentators believe that the great perceived imbalance of US strategic priorities during the past 20 years, continuing today by its focus on re-balancing the Middle East equation, has allowed China, India and countries such as Brazil and Turkey to break free of containment and to surge economically in a manner that has deprived the West of the control of world trade. This new reality transferred the centre of world economic production to the East. This development occurs now for the first time since the Industrial Revolution.

Until now, this has not translated into a shift to a new world-order economic system that reflects the new balance. However, the global economic system has lost a number of its central tenets, even if the West is still enjoying some of their remnants. The world's acceptance of a new political formula seems even more pronounced at the economic level. Post-Cold War illusions of a unipolar world order have evaporated. Today, no one can speak of a unipolar system, or refer to the US as the sole superpower; even the US has abandoned this ambition. The Obama administration is keen only to maintain America's leadership role in cooperation with other major countries, even though this is not consistent with US ambitions and its pursuit of power. It cannot be said that all of this has happened on a broad scale, or that it has translated itself into a new system. It merely reflects a new form of "partnership" for sanctions against Iran, or to hold some international conferences and make recommendations that cannot be applied.

Where is Russia placed within this American ambition, and what is the position of China, Europe, and other regionally-influential countries such as Brazil, Turkey, Iran and South Africa? The answers to these questions are still uncertain, and the international stage is still in turmoil and changing, with the push and pull within US strategy, placing sanctions on Iran as a priority, together with the search for an exit strategy from the crises in Afghanistan, Iraq and Pakistan.

The current equation should be viewed as partial and temporary. The priorities set by US strategy for its relations with Russia and other major countries are not permanent. The US has not addressed the problem of domination of the global system, nor has it addressed the large degree of military, political and economic competition between the major powers. These are the powers that will impose themselves on the US once the US rids itself of, or relaxes, its "Middle East" problem, a problem which has been exacerbated by Zionist influence on US strategists since the Clinton administration.

* Muneer Shafiq is a researcher in strategic studies

Last modified on Thursday, 19 February 2015 07:47
Tweet
More in this category: US midterm elections and implications for the Middle East »
back to top