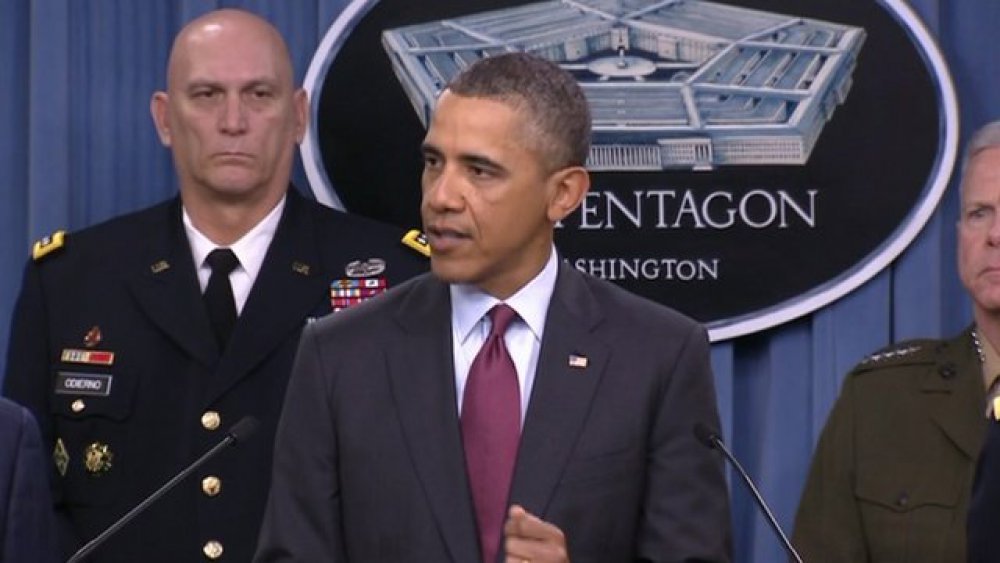 Building up naval and air forces in the South China Sea marks a sharp turn away from the focus on the Gulf and Central Eurasia that dominated US strategic planning and military operations during the 1990s and early 2000s. US warships undertook more extensive and more frequent operations in the waters of the Gulf and north-western Indian Ocean during the last phase of the 1980-88 Iraq-Iran war. Such maritime intervention set the stage for a dramatic expansion of army and air force involvement on the Arabian Peninsula in the wake of the 1990-91 Gulf war, including the establishment of a constellation of facilities that could be used for pre-positioning arms and supplies, refuelling and repairing aircraft and ships and carrying out joint manoeuvres with local armed forces. Large-scale US military installations spread north to Kyrgyzstan and Uzbekistan in the months leading up to the 2003 invasion of Iraq, even as long-term training and arms supply arrangements were made with Georgia, Azerbaijan and other former Soviet republics.

Whether Washington's turn toward the South China Sea will supplant the massive military infrastructure that the US has created in the Gulf and Central Eurasia is an open question. American military spending can almost certainly not be sustained at current levels, and the inability of the US Congress to formulate a fiscally sound budget has triggered automatic cuts that some policy-makers complain will severely diminish US capabilities. Nevertheless, the Departments of State and of Defense repeatedly affirm that the US intends to pursue initiatives in the Gulf and South China Sea simultaneously. This ambitious project reflects an underlying convergence of security concerns across these two regions that make it impossible for Washington to choose one over the other.

Expanded US military presence in the South China Sea

Measures to augment the US military presence around the South China Sea can be traced to 2005, when Washington concluded a security pact with Singapore. May 2010 saw the first joint naval exercises between the US and Vietnam and a year later Singapore authorised US warships to operate out of the base at Changi on a routine basis. US Secretary of Defense Leon Panetta and Secretary of State Hillary Clinton convinced Canberra in September 2011 to allow US forces to pre-position military equipment and use training facilities at bases in Australia. Two months later, President Obama announced the stationing of marines in Darwin and added that the US Air Force would enjoy expanded access to air bases in Australia's vast Northern Territory.

In mid-January 2012, the military commander of Palawan Island in the Philippines told reporters that US warships would carry out joint exercises with the Philippines navy in disputed waters west of Palawan. The Washington Post then reported that Manila had approached Washington with an invitation to return to naval and air bases in the Philippines. The overture followed the May 2011 delivery to the Philippines navy of a former US Coast Guard cutter and accompanied negotiations over the purchase of two more cutters and a handful of F-16 fighter planes. State Department officials quickly insisted that the US was only interested in long-term access to docks, airfields and training facilities, not actual bases. Meanwhile, arrangements were being made for a pair of P-3C Orion electronic surveillance aircraft to be dispatched to the Philippines to patrol the South China Sea.

East Asia's salience for US military operations is evident in the budget request that the Defense Department submitted to Congress in early 2012. The draft budget seeks funding for a giant floating staging platform which would carry a contingent of naval Special Forces (SEALS), armed drones, vertical and short take-off and landing (VSTOL) aircraft and attack helicopters; the primary purpose of the platform is to counter the use of mines in congested sea lanes. Also slated for development is a new class of nuclear attack submarines designed to engage other submarines and surface ships. The proposed budget provides for the next generation of long-range bombers, while keeping intact the twenty B-2s, 68 B-1s and 94 B-52s currently in service. Funds for short-range, tactical warplanes, on the other hand, are scaled back, as is funding for the army's conventional infantry and armoured divisions.

Continued US military presence in the Gulf

At the same time that the US is expanding its military presence in the South China Sea, American commanders are constructing a network of bases along the north-western littoral of the Indian Ocean to support operations by armed drone aircraft. One such facility in the Seychelles carried out its first missions in the autumn of 2011. Other new drone bases are planned for Ethiopia and an undisclosed site on the Arabian Peninsula. It was reported in February 2012 that the US Navy had joined the US Air Force in operating drones in this region: an advanced, high altitude drone has started to patrol the southern end of the Gulf around the clock and transmit real-time data to the headquarters of the Fifth Fleet in Bahrain.

Shortly after President Obama declared that all US combat forces would exit Iraq by the end of 2011, the US Central Command (CENTCOM) released plans to keep a sizable number of troops in Kuwait for the foreseeable future. US officials at the same time set out to persuade Bahrain, Qatar, the United Arab Emirates and Oman to accept 'smaller but highly capable deployments and training partnerships' when the war in Iraq came to an end. In mid-December 2011, the Jerusalem Post reported that several thousand US troops based in Europe would be airlifted to Israel in the spring of 2012 as part of an effort to forge operational links between the US European Command and the Israeli Defense Forces.

CENTCOM confirmed in early January 2012 that two aircraft carriers and their associated task forces will continue to operate in and around the Gulf, despite the withdrawal from Iraq. In addition, two US Army brigades, including one from the elite First Air Cavalry Division, and a squadron of attack helicopters are scheduled to take up permanent positions in Kuwait. There are rumours that facilities on Oman's Masirah Island and Yemen's Socotra Island are being upgraded to accommodate US military personnel. More reliable sources report that CENTCOM has authorised the conversion of an amphibious transport vessel into an Afloat Forward Staging Base for use by US Navy commandos in the Gulf.

On the whole, the military presence in the Gulf that US strategic planners now envisage resembles that of the late 1990s. Gone will be the post-2001 air bases in Kyrgyzstan and Uzbekistan; gone too the massive ground forces and cluster of airfields that characterised American-occupied Iraq. Still in place stand sizable army bases in Kuwait, an enlarged naval base in Bahrain and upgraded air bases in Qatar and Oman. It is doubtful that secondary naval and air facilities in Egypt will remain open to US forces in the wake of the ouster of President Hosni Mubarak, while US warplanes no longer frequent the two large-scale air bases that the US Army Corps of Engineers built in north-eastern Saudi Arabia.

Converging US interests in the Gulf and South China Sea

US armed forces poured into the Gulf and Central Eurasia during the 1990s in the context of three trends in the international arena.

Heightened US military involvement in the South China Sea is driven by somewhat different dynamics. Much of the impetus for an expanded and sustained US presence comes from Australia, which has embarked on a major military build-up in the face of China's decision to upgrade a key base of the South Sea Fleet on Hainan Island and deploy nuclear submarines in southern waters. Vietnam and the Philippines – along with Japan in the East China Sea – have engaged in a succession of clashes with Chinese vessels, prompting their governments to pursue closer ties to Washington. Even Indonesia's President Susilo Bambang Yudhoyono responded to the news that US Marines were going to be stationed in Australia by remarking that he was 'reassured that the US is committed to maintaining peace' in this corner of the world.

Nevertheless, Washington's interests in the South China Sea broadly parallel the ones that propelled the US military into the Gulf. The Straits of Malacca constitute not only a crucial choke point in the sea lanes that connect the Gulf to East Asia, but also a nexus of rivalry between a rising yet insecure China and an increasingly self-confident and assertive India, whose expanding blue-water navy has turned its attention in the direction of Southeast Asia. In July 2011, warships of the two rising Asian giants clashed off the coast of Vietnam. Such incidents may occur more frequently as China fails to develop alternative overland routes for its burgeoning hydrocarbon imports. US planners are not the only observers to note the growing salience of the sea lanes that pass from the Gulf to the South China Sea. In February 2012, a flotilla of Russian warships, returning from an anti-piracy mission in the Gulf of Aden, paid an unexpected call in the Philippines. The visit coincided with joint naval manoeuvres between the Philippine and the US and the Russian commander told reporters that his officers planned to observe the exercises before sailing on to Vladivostok.

Given the pivotal role of the Gulf in the contemporary global economy, it is unlikely that the US will sacrifice its dominant position in that region in order to augment its military presence in the South China Sea. The two regions in fact form a single security complex, in the sense that developments in one have a direct impact on the other. It is more probable that severe fiscal constraints will force the US to adopt measures that reduce the costs associated with ongoing military activities in the Gulf, even as greater resources get devoted to operations in the South China Sea.

* Fred H. Lawson is a Professor of Government at Mills College in the USA

Last modified on Thursday, 19 February 2015 08:13
Tweet
More in this category: China and the Middle East: Features of a new approach »
back to top