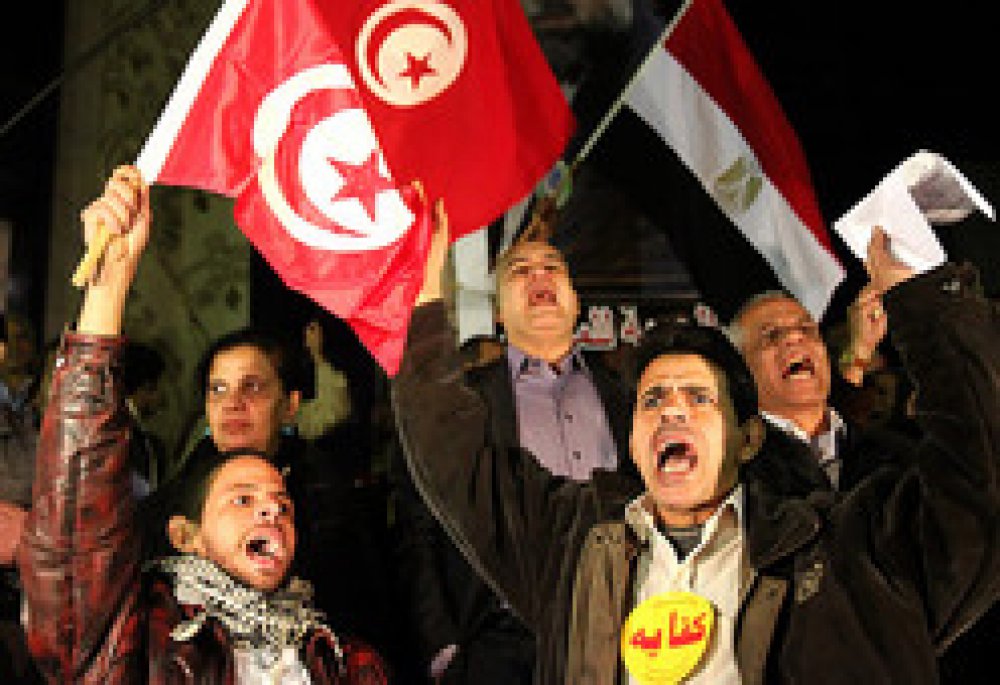 Everywhere people have been fascinated with how rapidly, and with such resolve, the people of Tunisia and Egypt have overthrown repressive regimes, inspiring others in the Middle East to contemplate the same. Na’eem Jeenah gives the background to this revolt and reflects on its meaning for the Middle East and Africa generally.

Muhammad Bouazizi, a 24-year-old vendor, had repeatedly been assaulted by police in the town of Sidi Bouzid in Tunisia’s poverty belt. Police insisted he must apply for a licence. When he was last assaulted in December 2010, Muhammad could not have imagined that his desperate decision to pour petrol on himself and set himself alight outside the local municipal office would light the flames of popular anger in a way that would bring down the dictator in his country and inspire protests across the Middle East as people demanded freedom and democracy.

People around the world have keenly watched developments in North Africa and the Middle East unleashed by Bouazizi, as protests developed into week-long uprisings. Millions of people have been involved in these actions for more than four weeks in Tunisia, three weeks in Egypt, and for days in Libya, Bahrain, Algeria, Yemen and Iran.

Although there are differences from country to country in people’s demands, at the heart of these uprisings are socio-economic issues, as well as lack of freedom and democracy. People across the region have been demanding jobs, lower food prices and democracy.

The uprisings reflect a wide-ranging dissatisfaction with neoliberal policies implemented by dictators who show scant regard for the rights of their people. Here I focus on Tunisia and Egypt, where mass mobilisation forced dictators to flee in humiliation.

Over the past few decades Egypt and Tunisia had become dependent on the global capitalist economy, with all the consequences of this. Their working classes further suffered as a result of the 2008 financial crisis. This can be illustrated by two factors.

Firstly, Europe is an important trading partner for North African countries, including Egypt and Tunisia which had become dependent on exports to Europe. According to the World Bank, Egypt’s year-on-year rate of exports to the EU (European Union) dropped from 33% in 2008 to 15% by July 2009. In the same way, the value of Moroccan and Tunisian exports fell by 22% and 31% respectively in 2009. The World Bank concluded that these countries faced their worst recession in six decades.

Secondly, many Middle Eastern countries have a great dependency on worker remittances sent home by citizens working abroad. Many Egyptian workers go to the Gulf, Libya and Jordan to work, while workers from other North African countries mostly work in Europe.

Remittances to Egypt, the Middle Eastern country with the largest inflow of these funds, account for 5% of its GDP (Gross Domestic Product). In the past three years, these funds have dropped dramatically as workers were retrenched in the financial crisis especially in the construction sector. In Egypt, remittances dropped by 18% from 2008 to 2009. As in other North African and Middle Eastern countries, Egypt’s drop in remittances meant that millions of workers and their families were left almost destitute.

The drop in exports, resulting in job losses, and the drop in remittances, resulted in increasing poverty, made worse by rising food prices. In Egypt, annual food price inflation accelerated to 18.9% in January 2011 from 17.2% in December 2010.

In February 2010, the IMF (International Monetary Fund) said that Egypt had been ‘resilient to the crisis’ because ‘sustained and wide-ranging reforms since 2004 had reduced fiscal, monetary, and external vulnerabilities, and improved the investment climate’. The IMF’s evidence for Egypt's resilience was its relatively high GDP growth rates. From 2006 to 2008, the economy grew at around 7% annually, and in 2009, when much of the world was experiencing negative GDP growth, Egypt recorded 4.6% growth.

But these figures hid growing inequalities. Economic growth led to worsening living standards for the majority of the population and an increased concentration of wealth in a tiny minority.

Some  of Egyptians live on less than $2 per day. The official unemployment rate is about 9%, but over half of those outside agriculture are workers in the informal sector who are not properly recorded. People live in a society lacking decent education, health or welfare.

In 1992, government liberalised agricultural laws, allowing for landowners to evict tenants. Encouraged by the IMF, World Bank and USAID, Egyptian agriculture shifted towards export-oriented production which typifies much of African agriculture. Hundreds of thousands of Egyptians could not survive on the land and joined the informal sector in urban centres.

Furthermore, state employment decreased with the privatisation of public companies. The number of workers in these companies halved from 1994 to 2001. Nearly 20% of the banking system was transferred from public control to the private sector.

This privatisation which the IMF said in 2006 ‘surpassed expectations’resulted in the massive downgrading of working conditions and impoverishment of large sectors of the Egyptian population. Privatisation also contributed to the increase in informal workers who played a critical role in the recent uprising.

In response to these neoliberal measures supported by the official state-linked trade union movement, independent worker organisations emerged in an important wave of strikes between 2006 and 2008.

During 2006 there were 220 major strikes involving tens of thousands of workers in the largest strike wave that Egypt had seen in decades. These strikes linked up with peasant movements resisting the loss of land due to neoliberal measures. These worker organisations and their struggles were key to underpinning the wave of protests that engulfed Egypt. <p " lang="en-GB">

The situation in Tunisia was similar to Egypt. President Zine al-Abidine Ben Ali’s regime was lauded by the EU, United States, IMF and World Bank as a model state and an economic miracle. Yet the reality was that it served mainly the elite.

Twenty-five years ago, Tunisia embarked on a structural adjustment programme demanded by the IMF. Harsh economic measures and a non-transparent and brutal programme of privatisation of the public sector characterised the programme. The programme yielded income for the state, and provided the means for large numbers of young people to enter the job market.

The regime silenced forces which criticised its ‘reform’ programme. It tried to wipe out the Islamic political opposition, represented by the Nahda (Renaissance) Movement, still the most important political movement in Tunisia. The state used physical and psychological violence and employed the ‘war on terror’ rhetoric to attain global acceptance.

The regime also abolished opposition unions in the General Union of Tunisian Workers. Over time however, the state transformed an opposition movement which supported the working class to becoming a supporter of the liberalisation policies of the state.

The state’s repressivemachinery then pounced on opposition political and civil society forces. Tunisia became one of the most closed governments in the world, with the greatest decline in free expression. In a country of ten million, its security apparatus included 150 000 policemen.

The structural adjustment programme coincided with a huge increase in the number of university students. Student numbers rose to half a million, with 80 000 entering the job market each year. Tunisia thus became the country with the highest unemployment rate relative to those holding tertiary education certificates. Most unemployed people reside in inland areas, in Tunisia’s ‘poverty belt’. Sidi Bouzid, the town where the recent uprising began, had an unemployment rate of 32%.

Across North African and the Middle East, where millions of people have taken to the streets, tens of thousands of workers have been part of these uprisings and in Tunisia and Egypt they have given the final push that convinces those in power that the end is near.

Unionism in Tunisia and Egypt was of the sweetheart variety for decades. Getting into the leadership of the union federation was a way to rise up the ladder of the ruling party. The Tunisian union federation initially condemned the uprisings and was hesitant about getting involved.

In both countries, however, workers then exercised their power, dismissing leaders in some instances, and took control of the policy direction of the unions. The result in Tunisia was that the General Union of Tunisian Workers became the main organisation within a largely leaderless uprising. In Egypt, the tide began to turn when tens of thousands of workers, including those working for the government and the military, came out on strike. Industrial output dropped by 80%.

One significant effect of protests has been to convince people in the rest of the Middle East, and indeed in most parts of the world, of the power of mass action, and its potential to overthrow a government. In Tunisia and Egypt, people’s demand for their rulers Ben Ali and Hosni Mubarak respectively to leave power was realised because of their resolve not to give in and to be steadfast in their actions.

The achievement of some of the objectives of the protestors has meant for people across the Middle East that they [ital]have [ital] the power to overthrow dictators. The Middle East has changed irreversibly. But the implications of the past few months go beyond this. If democracy emerges in Egypt, a new government will find it difficult to continue with a policy that puts the interests of the US and Israel above those of its people.

After Egypt signed the Camp David Accord with Israel in 1978, Israel neutralised the largest Arab country with the largest Arab army. Israel was able to slowly reduce its military spending from 30% of its annual budget to 8%. A democratic government in Egypt will mean that Israel will no longer be able to assume support from its neighbour.

Furthermore, Egypt has for the past few years played a crucial role in ensuring that the Palestinian Authority complied with the wishes of the US and Israel, and in ensuring that reconciliation between the two largest Palestinian groups, Fatah and Hamas, did not take place. A new Egypt will not be so willing to go along with this agenda.

The events that have, and are taking place, show great potential for a new, democratic Middle East. Even if democracy has not yet been established in Tunisia and Egypt, the will of the people will not be suppressed any longer, and people across the region are taking inspiration in confronting their rulers.

But democracy will not be enough to reverse the exploitation of the resources of the region and the imposition of exploitative neoliberal policies on the population. New governments will be expected to ensure that economic policies are reviewed and that just policies are put in place and workers’ rights protected.

It is also necessary to consider the regional and global implications of the mass action in the Middle East. Democracy in Egypt, Tunisia and other countries will weaken the Israeli agenda in the region and also the objectives of imperialism more generally. This could lead to a reconfiguration of the power of the Third World and of the African Union.

** This article first appeared in the 'South African Labour Bulletin' Vol. 35 No. 1 March/April 2011

Last modified on Thursday, 19 February 2015 08:19
Tweet
More in this category: The 'European' refugee crisis »
back to top