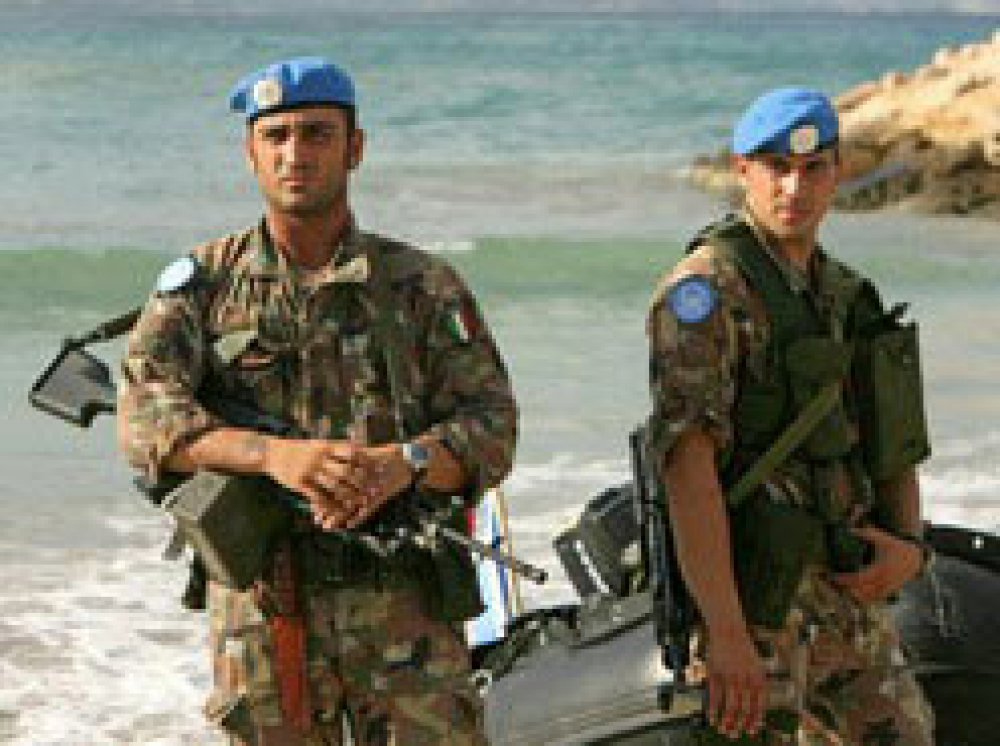 Earlier this month, the French contingent of UNIFIL encountered resistance by residents in several villages when it was carrying out "capacity testing exercises", leading to injuries on both sides. The "testing exercise" included searching of homes, taking photographs and questioning residents in order to identify "Hizbullah members". Residents accused the forces of violating private property and of not coordinating with the Lebanese Army. The context of the exercises that angered the residents was a simulation of a Hizbullah missile attack against Israel and how UNIFIL would react to protect the latter from more attacks.

The manoeuvres only confirmed Hizbullah's, and with them the residents', suspicions that UNIFIL, or at least the French contingent, was in Lebanon to assist Israel. Western diplomats say that the villagers' protests were manipulated by Hizbullah. There is no doubt that Hizbullah has strong influence on residents of South Lebanon. Shias make up the majority of the population in the south, and even Sunni and Orthodox Christian residents have usually rallied around Hizbullah, which is seen as a legitimate resistance movement and their only defender in the face of any Israeli onslaught.

The crisis was quickly contained. The Lebanese government assured UNIFIL that it supports the role of the UN forces, and the Lebanese cabinet decided to dispatch between 2,500 and 3,000 soldiers to the south to reinforce the Lebanese army. For its part, UNIFIL changed some of the commanders on the ground to allay residents' fears and to ensure future cooperation. However, the clashes between residents and the French contingent were only a symptom of a bigger crisis that has several dimensions.

UNIFIL was set up in 1978 following an Israeli invasion of Southern Lebanon, and was expanded after the 2006 war to prevent a new eruption of hostilities. It currently has 12,000 troops. It was entrusted with assisting in the implementation of United Nations Security Council Resolution 1701 that called for a cessation of hostilities, the deployment of the Lebanese army in the south, and the disarming of non-governmental militias.

From the outset there was a problem with the wording of Resolution 1701. As a peacekeeping force, UNIFIL is supposed to prevent hostilities from both sides: Hizbullah and Israel. But the wording of the Resolution focuses on ensuring that Hizbullah is kept under check. The UN Security Council, according to Resolution 1701, "authorizes UNIFIL to take all necessary action in areas of deployment of its forces and as it deems within its capabilities, to ensure that its area of operations is not utilized for hostile activities of any kind."

From the Israeli point of view, this paragraph means that UNIFIL has to have the force to ensure that it may be able to prevent Hizbullah from regaining its base in territories south of the Litani River - that area which, according to Resolution 1701, should remain free of arms. Over the last four years Israel has continually accused UNIFIL of failing to fulfil its mission, and, on occasion, it even accused UNIFIL of outright "collaboration with Hizbullah". The Islamic group, for its part, has cooperated with UNIFIL forces but has remained suspicious of its mission and the countries behind it - especially the United States and France.

Over the last three decades, residents of villages below the Litani River have grown to accept the presence of UNIFIL, which has become part of the South Lebanese landscape and even the South Lebanese population mosaic. Friendships and intermarriages have ensued over the decades. But while UNIFIL, in general, has not been perceived as a hostile force, its presence has not prevented or protected the residents from Israeli raids and attacks during the 1982 invasion and the 2006 war. That war consolidated the image and role of Hizbullah as a resistance movement defending Lebanon, and earned the movement more support and influence in the UNIFIL operating grounds in the south.

The operating term of UNIFIL comes up for renewal at the end of August 2010, amid continuing debate about its role, prerogatives and efficiency. Hizbullah believes that the residents of the southern villages drew a line in the sand, and curtailed UNIFIL's ability to aggressively check Hizbullah's activities. But French Foreign Minister Herve Morin recently stated that his country would seek to alter the UNIFIL rules of engagement and will attempt to integrate a special unit which would have the power to search the dwellings of suspected Hizbullah members in a weapons confiscation drive.

However, Israel may not wait for the United Nations Security Council to decide whether to grant UNIFIL more authority to launch an all-out campaign to disarm Hizbullah members and fighters in the South. The Chief of the General Staff of the Israeli Army, Lieutenant General Gabi Ashkenazi, said his forces would not hesitate to strike Lebanese towns and villages. "Hizbullah is consolidating its presence in populated areas where UNIFIL can't discover weapons," Ashkenazi told Israeli radio. "We will move in these areas if need be." Earlier this month, the Israelis produced photos and surveillance claiming that these proved that Hizbullah had fortified 160 villages below the Litani River "without any interference by UNIFIL".

Almost immediately after these clashes, the Kataeb Party (also known as the Phalange), the Lebanese Forces and some members of Al Mustaqbal coalition, led by Prime Minister Saad Hariri, sided with the UNIFIL French contingent, charging that Hizbullah had manipulated the clashes on behalf of Iran. Al Mustaqbal, which maintains close ties with France, accused Hizbullah of acting on behalf of Iran to send a warning to Spain and France, who have forces within UNIFIL, not to endorse a series of tighter economic sanctions against Tehran.

Judging by press interviews with residents in the villages of Kherbit Slim, Toulin and Qabrikha, the locals had been genuinely angry and resentful of the French contingent's behaviour, and had expressed strong support for Hizbullah. While the impression is created that Iran is positioned to benefit from any show of strength by Hizbullah, the reality is that these residents would have to reject similar manoeuvres regardless of Tehran's wishes.

However, the UNIFIL role and position in the south are still likely to be inflamed by events that already threaten to shake, if not disrupt, the Hariri-led government. The United Nations Special Tribunal on Lebanon, scheduled to release its findings later this year, points a finger at Hizbullah, accusing it of having played a role in the 2005 assassination of the late Prime Minister Rafiq Al Hariri. The release of the report could change the equation. It could result in all agreements between Hizbullah and the rest of the government partners collapsing, thus placing UNIFIL under pressure to disarm Hizbullah - which will openly resist.

If these internal Lebanese divisions explode, Israel may still use what it sees as the UNIFIL failure as a pretext to opt for war on the south, or even on all of Lebanon. At the same time, France may still try to push the UNSC to give more power to UNIFIL, thus empowering it to search for Hizbullah in the south. But such a move will again be a recipe for fuelling an internal Lebanese explosion.

* Lamis Andoni is a researcher and expert on Middle East Affairs.

** This article is published as part of a partnership agreement between the Afro-Middle East Centre and the Doha-based Al-Jazeera Centre for Studies.

Last modified on Thursday, 19 February 2015 15:44
Tweet
More in this category: Politics surrounding the tribunal for Lebanon »
back to top