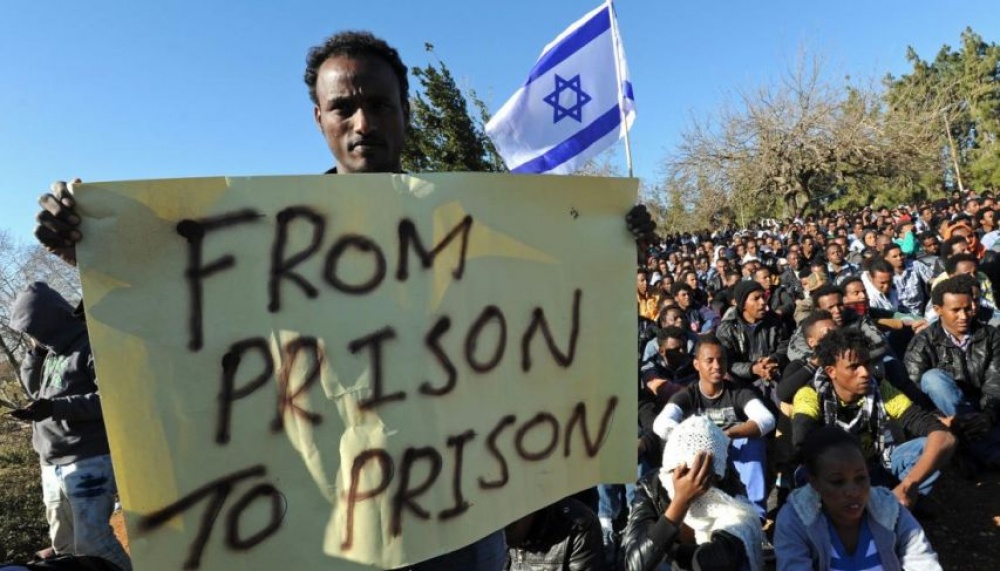 Israel began this year by announcing that African refugees (who are mostly from Sudan and Eritrea) faced imprisonment if they did not choose the controversial ‘voluntary departure package’ that the government was offering them before April. The package was part of an ultimatum to African migrants in Israel, allowing them two options: accept the $3 500 USD and leave to a ‘third country’ (said to be Rwanda or Uganda) or permanent incarceration in an Israeli jail. Rwanda and Uganda have denied agreeing to host African migrants deported from Israel, but evidence collected by the UN High Commissioner for Refugees (UNHCR) suggests otherwise. The decision to kick out around 20 000 African migrants comes as Israel embarked on a new strategy to rally African diplomatic support in international bodies. The UN and certain states – such as Canada – have condemned the Israeli migrant plan, but the African Union (AU) and most African countries remain silent on it, creating the perception that there is no substantial opposition to it.

Since 1950, Israel’s Law of Return has allowed the immigration of Jews from around the world, including from Ethiopia. African refugee migration to Israel began in the mid-2000s, and the numbers increased rapidly in the late 2000s. By late 2010, Israel received its highest number of African migrants, with between 30 000 and 45 000 entering through the Israeli-Egyptian border. Currently, around 38 000 African migrants – mainly asylum seekers from Eritrea and Sudan – live in Israel. The first wave of Sudanese migrants (mostly from the conflict-ravaged Darfur region) started arriving in Israel in December 2005 through Egypt. Due to the circumstances that forced them to flee Sudan, asylum seekers in Israel have a right to have a sur place refugee claim, and should automatically be recognised as such under the 1951 Convention relating to the status of Refugees.

The sur place refugees claim is also applicable to Eritreans, who fled widespread human rights violations, including forced conscription, forced labour and torture. Eritreans who evaded being drafted into the military face persecution if they return. Additionally, according to the UNHCR, many Eritrean migrants seeking asylum in Israel since 2004 have been Christians who faced abuses in Eritrea since 2002, qualifying them for refugee status and asylum in Israel under the 1951 Refugee Convention. Despite this, Israeli officials and Israel’s prime minister have continuously labelled African migrants ‘infiltrators’ who arrived in Israel for economic reasons. Moreover, many of the migrants in Israel do not enjoy asylum status as the application process is notoriously slow and hardly produces favourable outcomes for the migrants.

Asylum application in Israel is so slow that by the end of 2017 only 10 persons had been granted refugee status in response to 15 000 asylum applications since 2010. The slow and unresponsive process seemed to be changing in 2007 when the then-prime minister, Ehud Olmert, granted 500 temporary residence permits to migrants from Sudan under pressure from the UNHCR. This changed when Benyamin Netanyahu became prime minister. The current 38 000 African migrant number is after years of sporadic deportations of Africans to unnamed countries. They are concentrated in south Tel Aviv neighbourhoods, and are from among the refugees who arrived between 2006 and 2013. After Israel built a fence on its border with Egypt in 2013, the number of African migrants arriving through Egypt decreased drastically. Holot, a migrant detention centre in the Negev desert, currently houses 3 000 African migrants.

Holot was built in 2012, and has the capacity to house around 1 400 people at a time. It has been at the centre of Israel’s immigration policy towards African migrants. In November 2017, Israel announced plans to close the Holot centre and to deport the residents of the centre. It is over capacity with 3 000 African male migrants who do not possess residency or work permits. The Holot detainees are unable to work as they are required to report to the centre at specified times during the day. Migrants in other parts of Israel face similar challenges to those at Holot, and work illegally, facing exploitation and below minimum wage salaries. Israeli citizens who hire African migrants without permits face fines, and are required to deduct twenty per cent of their wages to put into a controversial ‘deposit fund’, thus making it near impossible for African migrants to survive.

Migrants regularly face abuse and ill-treatment from Israeli citizens, with many calling for their deportations. In August 2017, tensions came to a boil when south Tel Aviv residents protested the presence of African migrants. This was followed by a visit by Netanyahu, who promised to remove the ‘infiltrators’. The closure of Holot centre and the prior construction of a steel barrier fence at the Egypt-Israeli border form part of the various measures that Israel has taken to dramatically reduce the number of African migrants.

At the Egypt-Israel border stands a steel barrier that stretches for 242 kilometres, boasting five to seven metre high fences constructed of 35 000 tons of metal and steel. This gigantic barrier was to curb the influx of African migrants into Israel. The steel barrier intends to prevent African migrants from entering Israel through Egypt’s Sinai. The construction of the fence also saw contracts awarded to the Yehuda Fences Company, which is part of the Yehuda Group owned by the South African company Cape Gate. This is not Cape Gate’s first foray into illegal Israeli activities. In 2009 a report by the Palestinian Grassroots Anti-Apartheid wall campaign revealed that the company was complicit in maintaining and assisting with the construction of what Israel calls a ‘separation barrier’ and the organisation calls an ‘Apartheid Wall’.

The Israeli African migrants’ policy is being abetted by certain African countries that are said to be receiving deported migrants from Israel in exchange for financial compensation. The UNHCR reported that between December 2013 and June 2017, Israel deported 4 000 Sudanese and Eritrean asylum seekers under the ‘voluntary departure programme’ to Rwanda and Uganda. Both countries have denied claims that they had been complicit in Israel’s controversial plan. Although they deny having made deals with Israel to accept the migrants, the two countries have embraced Israel’s attempts to strengthen links with African states. In the wake of the recognition of Jerusalem as Israel’s capital by US president, Donald Trump, the UN passed a resolution rejecting the move; nine African states abstained, including Rwanda and Uganda, suggesting a solidification of links with Israel.

The silence of many African countries about the ill treatment of African migrants in Israel demonstrates complicity. The AU, in which Israel seeks to gain observer status, has not condemned the Israeli deportation plan, nor pronounced on reports that two of its member states, Rwanda and Uganda, have assisted Israel in its deportation and ill-treatment of African migrants.

Israel’s being a signatory to the 1951 United Nations Convention on Refugees obligates it not to return refugees to a country where they face serious threats to their lives or freedom. Israel’s policy towards African migrants came into the spotlight around 2013 after the UN’s High Commissioner for Refugees (UNHCR) reported that Israel was offering a ‘voluntary departure’ ultimatum. Israel attempted to redeem itself by stating that the plan did not include women and children, and targeted only males of working age. The UNHCR responded that the plan could not be considered ‘voluntary’ as both options given to the migrants threatened the life and freedom of the asylum seeker, and was thus in contravention of the 1951 Refugee Convention. By deporting the migrants back to their home countries, Israel placed their lives in more danger than they had previously faced. This is especially significant in the case of Sudanese migrants who, according to the UNHCR, faced jail sentences under Sudan’s Criminal Act, which prohibits citizens from visiting an enemy state, which Sudan considers Israel to be.

Having faced increased pressure from local and international groups to halt the deportations of migrants to their home countries, Israel revised the policy and included a component to allow refugees to choose to be deported to a ‘third’ country, which the UNHCR said was either Rwanda or Uganda. If migrants choose this option, they are given $3 500 USD to help them settle in the new country, an Israeli travel document, and a letter from the ‘third country’ guaranteeing a tourist visa upon arrival. Various Eritrean and Sudanese migrants who took this option and were deported to Rwanda have reported to the UNHCR that although they received the promised $3 500 USD, their documents were confiscated upon arrival and they could not apply for asylum. Further, they claim, immigration officials in Rwanda extorted money from them and ultimately trafficked them to Uganda where they face imprisonment for entering the country illegally.

In a recent twist, in its efforts to accelerate these deportations, the Israeli Population and Immigration Authority has offered an incentive to Israeli civilians to serve as ‘inspectors’ and implementers by forcibly removing African migrants from Israeli neighbourhoods. Under this offer, civilians are recruited as ‘inspectors’ who will rout out migrants who do not take up the ‘voluntary departure’ deal. The main targets under this new plan are African migrants residing in the greater Tel Aviv area. Once the ‘inspectors’ have identified those willing to take the departure package, they will facilitate the paperwork for their departure as well as monitor their entry to the third country. These inspectors will receive an incentive of $8 700 USD per deported person for a two-month period – higher than the total sum of $3 500 offered to the Africans who accept the deal and the $5 000 USD reported to be given to Rwanda and Uganda for each migrant they receive.

Israel insists the majority of African migrants in Israel are not asylum seekers but economic migrants. The UNHCR claims most of them are from Eritrea and Sudan and fled war and persecution, which qualifies them as asylum seekers and refugees. The controversial ‘voluntary departure’ package, the barrier fence on the Egypt-Israeli border, and the plan to close the Holot refugee detention centre signals Israel’s commitment to rid the country of ‘infiltrator’ African migrants seeking refuge. The African migrants have been given until April this year to take up the ‘voluntary departure’ package or face permanent jail detention, prompting widespread protests from the migrants and local human rights groups. Israel has also been condemned by the UN and some western countries, but the silence and the complicity of African countries in this controversial African migrants’ policy leaves little hope for the migrants. With this plan to rid itself off African refugees, Israel adds to its list of human rights and international law violations.

Last modified on Friday, 23 February 2018 11:06
Tweet
More in this category: Russia and Israel: The Middle East vector of relations »
back to top