What lies behind the Turkish/Israeli rapprochement and who stands to benefit? 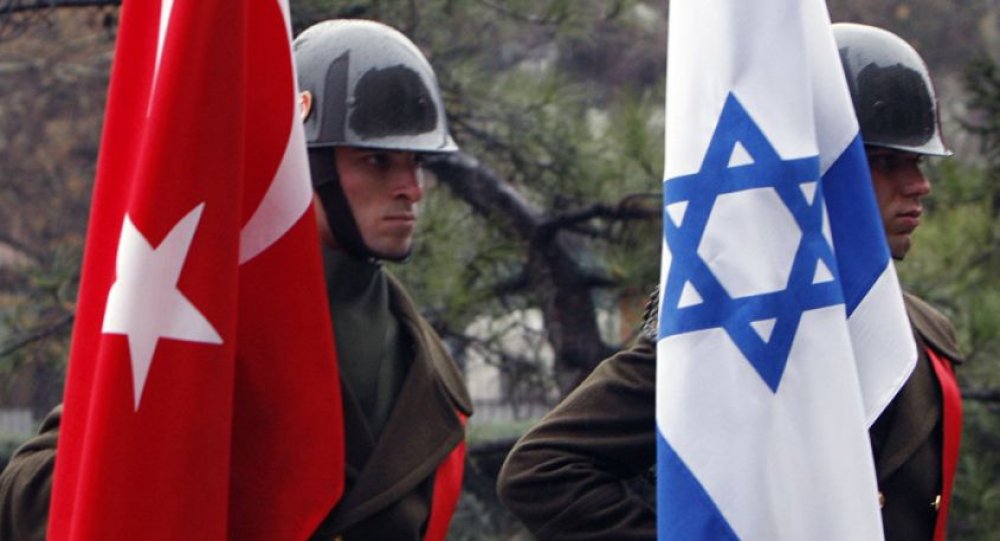 Reports of secret meetings between Israeli and Turkish officials in Switzerland in February suggest Turkey’s ruling Justice and Development (AKP) is softening its attitude towards Tel Aviv. Any rapprochement will likely include compensation for the Turkish victims of the Israeli commando raid on the Mavi Marmara ship in 2010, access to Gaza for Turkish aid ships, and a Turkish statement to crack down on Hamas operations from within Turkey. Less public agreements will likely include a reopening of arms deals between the two former allies, a united front on the diplomatic stage concerning Iran’s regional influence, possible energy deals concerning Israel’s eastern Mediterranean gas reserves and the exchange of intelligence on various non-state actors, particularly Kurdish groups. The talks in Switzerland may signal a watershed, but broader strategic imperatives, overlapping rivalries and new geopolitical realities have been coalescing behind the scenes to nudge Turkey towards Israel.

The killing of the nine Turkish citizens on the Mavi Marmara – part of the Freedom Flotilla bound for the Gaza Strip in 2010 –  had been preceded by a dip in relations caused by a tirade by then-Turkish prime minister Recep Tayyip Erdogan against Israeli President Shimon Peres at the World Trade Forum in Davos in 2009.

In 1998 the Turkish government planned to invest 150 billion dollars over twenty-five years in the modernisation of the country’s armed forces. Turkey’s main strategic goal during this time was to develop its local arms industry through the acquisition of advanced military knowledge, technology and materiel from suppliers who placed no conditions on sales. Israel was perfect since it chose to ignore Turkey’s egregious human rights record at the time, unlike EU arms suppliers. Israeli arms companies supplied Turkey with over 389 million dollars in weapons between 2001 and 2014, including ten Heron drones purchased under an AKP government. With old and new threats to Turkish security emanating from the resurgent Kurdistan Workers Party (PKK) and Islamic State group (IS) respectively, Turkey seems to again be aiming to diversify its arms’ procurement. The Turkish defence minister sent a special envoy to meet with Israel’s security establishment on 1 March to negotiate financial terms on a number of weapons deals which reportedly will include drones. The planned purchase is a major component of the rapprochement.

Israel’s position as a world leader in cyber-security will also entice capital from interested public and private parties in Turkey. Turkish Ministry of Transport and Communications report covering 2013-2014 stated that Turkey was developing a comprehensive cyber-security programme. The fact that Syrian regime ‘hacktivists’ were able to wreak havoc on top-secret Turkish agencies in 2013 and 2014 suggests that this programme is still in its infancy. Thus, sourcing technology, expertise and equipment Israel until its own programme is underway could be useful for Turkey to counter the cyber threats it already faces.

There are also energy-related reasons that Turkey would want to upgrade ties with Israel. Russia’s entry in the Syrian civil war in support of the regime creates an energy dilemma for Turkey, which imports about fifty-five per cent of its natural gas supplies from Russia (and another eighteen per cent from another of Syria’s allies, Iran). Turkey is opposed to Moscow’s backing of the Bashar al-Asad regime, and has genuine fears that Russia might use gas as a geo-strategic bludgeon, not least to keep open the strategic Bosphorous strait which is the throughway for Russian ships taking supplies to Syria, and which, under the 1936 Montreux Convention Regarding the Regime of the Turkish Straits, is under Turkish control. The discovery of billions of cubic metres of gas off Israel’s coast, and in Gazan waters controlled by the Israeli navy, provides the possibility of an alternative energy source for Turkey that could make it less reliant on Russia. Israel is not poised to immediately satiate Turkish demands due to various complications over Israel’s development of these fields. Nevertheless, energy diplomacy remains a factor bringing these two states closer together.

The combination of détente with the West, and its presence in Syria – through proxies and its own forces – has granted Iran considerable weight in the International Syria Support Group (ISSG) co-chaired by the USA and Russia. This has sent Turkey’s Syria policy into a tailspin, as the ISSG’s fixation on battling IS has contributed to a ceasefire which technically grants Syrian, Russian and Iranian forces the right to fight Turkish- and Saudi-backed rebels. The more pressing issue, from Ankara’s perspective, is that the Syrian Kurdish militia, the People’s Protection Units (YPG), has gained from Russian bombing campaigns along northern Syria. PYG is the armed wing of the Democratic Union Party (PYD) in Syria and the main militia for the Kurdish Supreme Committee whose autonomous canton of Rojava in Syria is regarded by Ankara as a security threat because it serves as a safe haven for the Kurdistan Workers’ Party (PKK) in Turkey, and because the Rojava model for Kurdish autonomy is inspiring for Turkey’s Kurdish population. Israel’s close relationship with the Kurdish Regional Government (KRG) in northern Iraq, with which Turkey already good relations, is useful to Turkey as the KRG is a competitor to the PKK-PYD for leadership of the Kurdish movement. Ankara sought to exploit these rivalries during the IS siege of the Syrian Kurdish town Kobane in 2014 when it allowed KRG Peshmerga forces access to liberate the town in an attempt to prevent a YPG-PKK symbolic victory. Israel is also able to provide Turkey with intelligence on the YPG and PKK.

Military agreements between Israel and Turkey during the 1990s reaped considerable dividends for Tel Aviv. The 1996 signing of the ‘Military Training and Cooperation Agreement’ between the two states enabled Israel to participate in war games with NATO members, and granted it a strategic alliance with NATO. Israel was able to deepen its strategic depth abroad through utilising Turkish airspace, which it often exploited to monitor events in Lebanon and Syria. The downgrading of these relations in the wake of the Mavi Marmara raid left Israel more vulnerable at its northern frontier, with an inability to exploit airspace to monitor Hizbullah and Syrian personal movements. Recent Israeli artillery and war games around the Lebanese border reflect this insecurity. Israel is now looking to shore up its capabilities in the aftermath of the Iran nuclear deal and Hizbullah’s reported procurement of advanced Russian ballistic weapons, a return to the past agreement in which an informal military alliance is in place is not imminent, but the Israeli defence establishment will remind Prime Minister Benjamin Netanyahu that a return to the tacit military pact of the 1990s would benefit Israel as the Syrian quagmire deepens.

Turkey’s diplomatic capital with Syriane opposition groups, particularly Islamists, and members within the Gulf Cooperation Countries and their allies provides Israel with a critical ear among Muslim states opposed to Iranian ambitions. With the paranoia in Israel that the nuclear deal with Iran between the P5+1 (the five permanent members of the UN Security Council – USA, Britain, France, Russia and China – plus Germany) has imperilled Israel’s monopoly of force in the region, the diplomatic capital gained by Israel through improved relations with Turkey cannot be overstated. Coordination with the GCC, and especially Saudi Arabia, in countering Iranian ambitions will be a foreign policy objective for Israel in the coming years. Despite bilateral (albeit secretive) alliance building in the gulf by Israel, official links with Ankara can develop these links without further compromising Riyadh, Doha and Dubai, which require the pretence of aloofness from Israel for reputational purposes.

Furthermore, Israel hopes that Turkey’s influence on Hamas will provide it with a partner that can pressure the group when needed. Turkey has played patron to Hamas, and wields some influence within the group’s politburo.

Implications for the Palestinians

The Palestinian issue plays an important tactical role in the AKP’s foreign policy, and Turkey was in the throes of a diplomatic crisis with Israel at the apogee of Erdogan’s national and regional popularity. His public admonishments of Israel have been common spectacle, especially with regards to the situation in Gaza, a cause celebre for the Turkish population. Erdogan will want to rebuild his shattered image within the region, and he will therefore want a renewal of relations with Israel to be premised on agreement for at least one Turkish aid ship to Gaza. The situation in Gaza is reaching breaking point, with the territory going into its ninth year of siege and on a ‘disastrous trajectory’, according to the UN.

A complete removal of the blockade as a result of Turkish demands is unlikely, but Israel may allow limited entrance of Turkish aid into the besieged territory. Israel would prefer Hamas having Turkey, Qatar and Saudi Arabia as patrons rather then Iran, and thus Israel’s allowing a trickling of Turkish aid into Gaza is possible. Furthermore, tepid comments from the US State Department with regards to Israel’s human rights transgressions have frosted the historically special relationship between Washington and Tel Aviv. By allowing Turkish ships, possibly after being searched and monitored by Israeli agents, to enter Gaza, Israel will portray itself as a benevolent force granting its subjugated population a limited reprieve. The humanitarian public relations coup this could bring for Israel could be significant, as could be the ammunition it provides its supporters in the USA.

The Palestinian faction which will benefit most from a Turkish-Israeli accord is Hamas. Any reprieve for beleaguered Palestinians in Gaza will give the movement more popular appeal in its heartland. Former Fatah member Mohammad Dahlan, who has designs on the presidency of the PLO and of the Palestinian Authority (PA) and has been strengthening his support base in Gaza, risks seeing his support weakened if aid enters through Hamas diplomacy. Dahlan is planning a comeback that is being funded primarily by the UAE and supported by Egyptian President Abdel Fattah al-Sisi. Sisi has already stressed he opposes Turkish ships docking at Gaza’s port. Sisi and Erdogan already have a tempestuous relationship after the former’s coup which overthrew President Mohammad Morsi in 2013.

Developments in the region have compelled Ankara to reorganise its foreign policy, and new and resurgent security challenges have compelled it to reconsider its alliances and its source of high grade military technology. Its overreliance on Russian energy has also made it wary, and made the possibility of sourcing gas from Israel more attractive. Erdogan’s grip on Turkish foreign policy has resulted in some disastrous decisions which have scuppered his reputation as a darling of the region. Supporting besieged Palestinians in Gaza in a manner no one else is able to is a good way to reassert himself regionally and attempt to reverse some reputational damage.

Israel has little to lose by rebuilding ties with Turkey. A ready customer for its gas and weapons will provide the economy with a rich windfall. Closeness with a NATO country, especially after a very public spat between US President Barack Obama and Netanyahu and disagreements with the EU, would be warmly welcomed in Tel Aviv, especially in defence circles.

For Palestinians, especially in Gaza, Turkish-Israeli rapprochement is unlikely to result in any significant and medium-term improvement in their living conditions. There will be short-term humanitarian benefit (and political benefit for Hamas) from a Turkish aid flotilla – the best possible scenario for Gazans, but that will not lift the siege. And even such aid is not certain; it still needs approval by a hawkish Netanyahu cabinet, whose objections will be bolstered by loud calls from Cairo, and quieter calls from Ramallah where PA and Fatah leaders would be loathe to see aid reach Hamas-controlled Gaza.

Tweet
More in this category: Netanyahu’s tour shores up support for Israeli AU observer status »
back to top