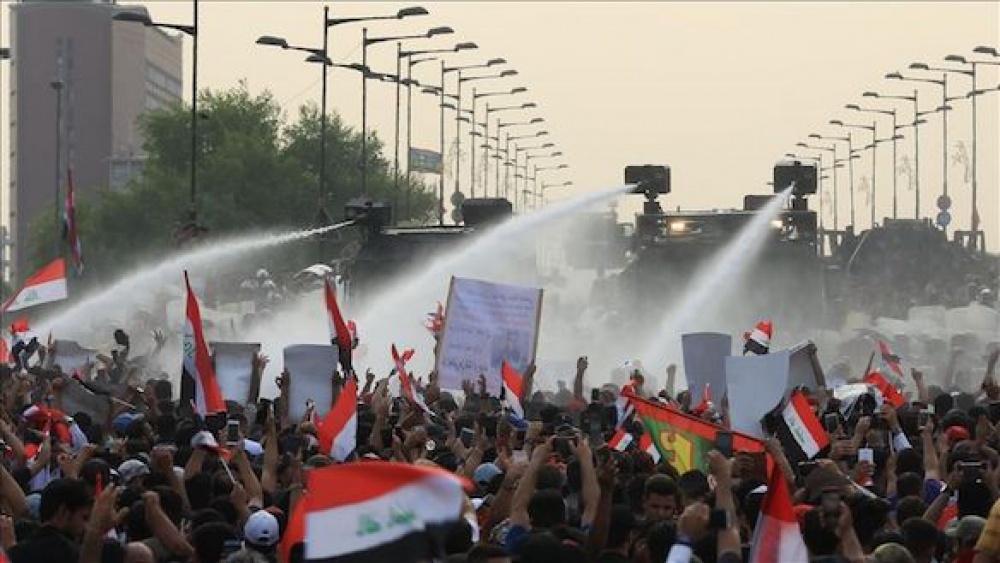 Despite the resignation of Iraqi Prime Minister Adel Abdul Mahdi on 30 November 2019, protests in Iraq endure, with protester demands having evolved to include calls for a restructuring of the political system. An indication of how serious the situation is, Grand Ayatollah Ali Sistani has become more vocal, calling, on 20 December, for immediate new elections. The protesters’ call for a revamp of the political system means that there is little possibility, in the immediate future, for the demands of the protesters to be met and for the uprising to end, since the likelihood of finding a compromise candidate who will be acceptable to protesters, and protect the country’s entrenched political actors, is remote. Instability is likely to intensify as the different actors continue jostling to instrumentalise the protest movement, especially in light of the attack on protesters securing the Sinak Bridge in Baghdad earlier this month, which killed over twenty people. What is certain, however, is that Iran’s role in the country, both as influencer and mediator, is increasingly being threatened.

The demonstrations, which consolidated into their current form in early October, were mainly a protest against the country’s endemic corruption and high unemployment rate, especially among graduates. Despite Iraq’s possessing the fourth-largest oil reserves in the world, around a quarter of Iraqis live on less than a dollar a day, and youth unemployment stands at between fifteen and seventeen per cent; Transparency International names it the twelfth worst country on its 2018 corruption perception index. These protests are a continuation of the July 2018 protests in Basra and other southern and central provinces, and have been spurred by grievances over corruption and poor public services. However, the movement has expanded in 2019 to include Baghdad.

Significantly, the 2018 and 2019 protests both have been mainly comprised of Iraqi Shi'a, who, despite being the majority in the country, had been marginalised during Saddam Hussein’s reign, but whose influence increased in 2005, during the US occupation. Previous popular protests, especially in 2013 and 2014, had largely comprised of disillusioned Sunnis, and thus were more easily dismissed by the new (Shi'a) political elite. They were also mainly restricted to majority Sunni provinces such as Anbar and Ramadi; the perceived sectarian composition meant that they did not seriously threaten the survival of the regime.

The Abdul Mahdi administration had acknowledged the legitimacy of protesters’ demands, and had resolved to enact electoral reform. However, as with its response in 2018, the government simultaneously attempted to violently quell demonstrations, killing over 400 and injuring around 8000 since October, mostly in Baghdad and in southern provinces such as Nasiriyah. This inflamed tensions further, with many now seeking a full overhaul of the country’s political structure.

The situation has been worsened by attempts to instrumentalise the protests, especially by the influential cleric Muqtada al-Sadr, whose main support base is in the south, the epicentre of the protests, and who, in recent weeks, has dispatched armed personnel to protect protesters. Sadr had also previously advocated a general strike. Attempts to find a compromise between the different political blocs were bearing fruit in late October, following meetings between Sadr and the the Hashd Shaabi (Popular Mobilisation Forces) leader Hadi Al-Ameri. However, Iranian mediation stunted the effort. An agreement was concluded by most of the blocs, including Sadr’s, with Tehran’s mediation to protect Abdul Mahdi and to stall the protests, but protester anger rendered this impossible to implement. Protesters have since become more vociferously against Iran’s role in the country, and Iranian consular buildings were attacked in Najaf and Karbala in November.

Iraqi politics is largely dominated by blocs of veteran politicians, many with links to Iran or its clerical establishment. A 2005 Constitution divides power among Sunnis, Shi'as and Kurds. The 2018 parliamentary election saw no political bloc gain a majority. Sadr’s influence was, however, enhanced; his party received the highest number of seats but had to rule in coalition with the Hashd al-Shaabi, in a deal brokered by Iran. The established blocs, including Sadr’s, benefit from the current political configuration, hence. That is why, though Sadr and Ameri first agreed on the need for Abdul Mahdi’s resignation, they later closed ranks behind him following the Iranian mediation.

Protester demands were given a boost in November after receiving direct support from the country’s most influential cleric, Grand Ayatollah Ali Sistani, whose criticisms of the government’s will to implement  reforms was the main factor influencing Abdul Mahdi’s eventual resignation. Sistani has also been increasingly critical of Iran’s role in Iraq, and he has asserted that the formation of an Iraqi government had to be accomplished between Iraqis without outside meddling. Sistani’s support has provided further legitimacy for the protests, widening their appeal and dividing the Hashd, many of whom now support the protests, after Sistani’s criticisms of the government, while other Hashd groups take their cue from Iran. Sistani does not usually comment on party political matters, and is revered by most political actors in the country. His occasional political calls usually get implemented, such as his call for early elections in 2003, for the removal of Nuri al-Maliki in 2014, and for the taking up of arms against the Islamic State group, which resulted in the formation of the Hashd, were all largely implemented.

Tensions are boiling over, with suspicion intensifying in the protest camps. This has not been helped by the current stalemate between the government and protesters and is engendering a power vacuum, which can easily be exploited by different actors. Two attacks on 7 December on protesters camped on the Sinak bridge in Baghdad (which killed over twenty), and on Sadr’s home in Najaf,  add to the potential for protests to become militarised, especially since Sadr’s supporters possess arms and the Iraqi military is in flux, after Abdul Mahdi’s resignation. Some have accused Sadr of being involved in the attack, but this is unlikely, since his supporters were helping secure the bridge and the drone attack was aimed at him. It is thus more likely that the attacks, especially on Sadr’s residence, were instigated by one of the Hashd groups opposed to the protests.

Following Abdul Mahdi’s resignation, the country has until 16 December to nominate a new candidate for prime minister, but the events of the past few weeks have impeded the impetus and abilities for the different actors to find a consensus, even though this failure will likely weaken their positions. No names have been put forward to replace Abdul Mahdi, with Sadr’s bloc, Sairoon, insisting that a new prime minister be chosen by the anti-government protesters, and that no previous minister or anyone that might be rejected by the protesters is a suitable candidate. Protesters have already been circulating their own lists for who should succeed Abdul Mahdi. Sistani, meanwhile, issued his own statement on 20 December, calling for immediate elections. The prime minister’s resignation has left a power vacuum and limited accountability, especially since the Abdul Mahdi government can only act in a ‘caretaker’ role for the next thirty days, curtailing both its powers and longevity to see any process through.

Sistani supports the UN Assistance mission in Iraq’s (UNAMI) November road map, which calls for constitutional change, electoral reform, the release of protesters, job creation and investigations into the deaths of protesters. It is probably the only means of exiting the current impasse. However, its implementation will weaken the powers of the entrenched political blocs, and the likelihood oof its success is therefore limited. Iran’s failure to mediate, like it did in 2018 with Abdul Mahdi’s appointment, might suggest its diminishing influence in Iraq; Sistani’s vailed criticisms of Iran could further weaken Tehran’s position, which remains strong.

Tweet
More in this category: Turkish airstrikes in northern Iraq anger Baghdad and expose relations with Iraqi Kurdistan »
back to top