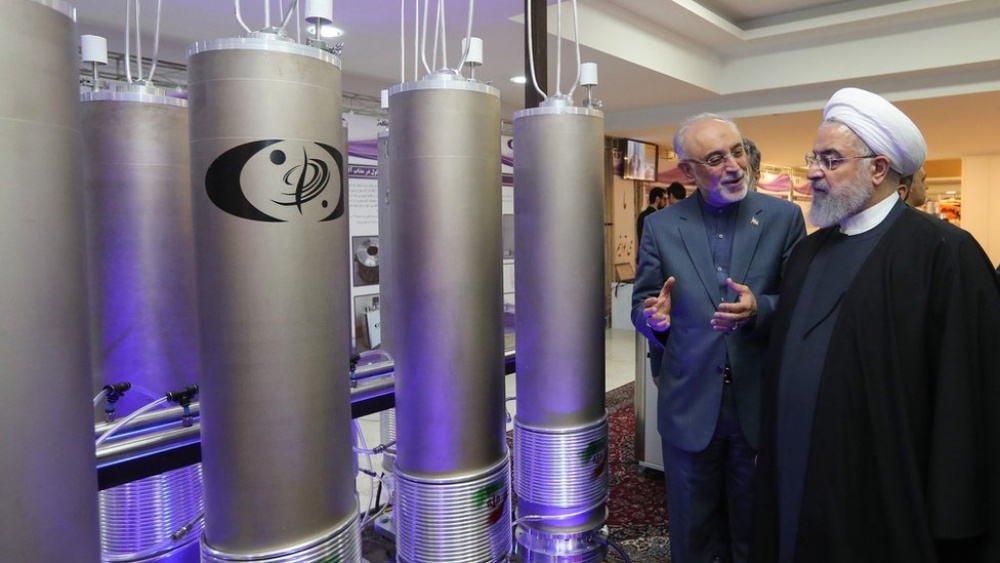 On 4 January, a day after the one-year anniversary of the US assassination of top Iranian general Qassem Soleimani in Baghdad, Iran took two steps as a show of force, against the fallouts from the US ‘maximum pressure’ policy of then-outgoing US president, Donald Trump. First, Iran resumed uranium enrichment to 20 per cent, hugely exceeding the 3.67 per cent level allowed by the Joint Comprehensive Plan of Action (JCPOA or Iran nuclear deal), and notifying the International Atomic Energy Agency (IAEA), whose inspectors are monitoring Iran’s nuclear programme, of its decision. Second, the Islamic Revolutionary Guard Corps (IRGC) seized a South Korean-flagged oil tanker in the Persian Gulf. Both actions, on the same day, were shows of force, with different rationales and intentions, but both part of an Iran counter-pressure strategy in the face of immense US-led pressure.

Iran's decision to enrich uranium to a level of 20 per cent (thus dramatically reducing the break-out time for developing a nuclear bomb, since 20 per cent enrichment constitutes nine-tenths of the enrichment work required to reach weapons-grade enrichment of about 90 per cent) represents the partial implementation of a law passed by the conservative-controlled parliament and quickly ratified by the hardline-dominated Guardian Council. The law demanded that the government of President Hassan Rouhani substantially boosts various components of the nuclear programme in order to force the USA to concede, in future negotiations, on the onerous sanctions it has imposed on Iran. On the same day, Iran’s Foreign Minister Javad Zarif tweeted how Iran officially views this step: reducing its nuclear commitment as a legal response to the USA violating its JCPOA commitments, and its assurance that boosting its nuclear capacity was reversible once Washington recommits to its JCPOA obligations, and lifts re-imposed sanctions. 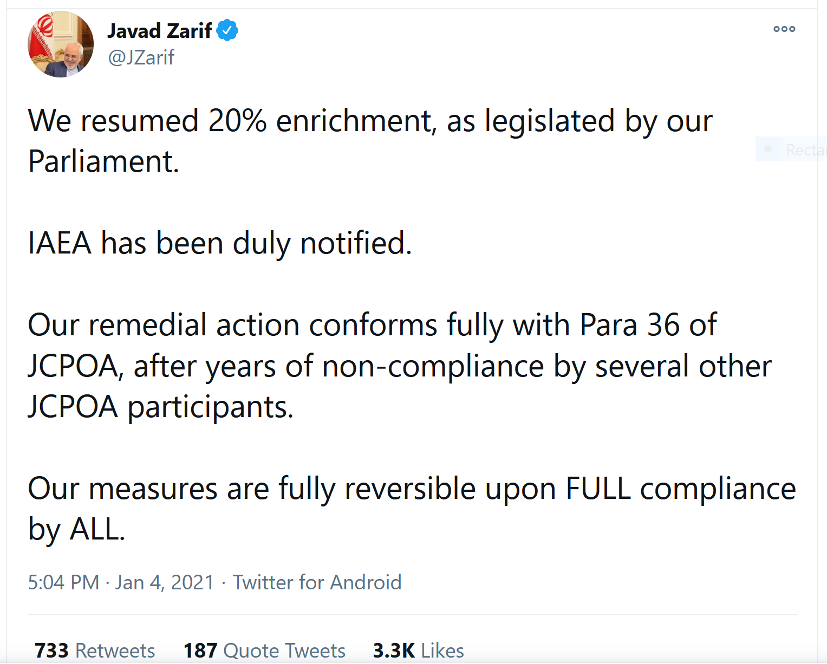 ‘Our remedial action conforms fully with Para 36 of [the] JCPOA, after years of non-compliance by several other JCPOA participants,’ Zarif tweeted. ‘Our measures are fully reversible upon FULL compliance by ALL.’

Rouhani’s administration had, at least publicly, opposed the bill about boosting the nuclear programme, arguing that it would undermine prospects for renewed diplomacy after Joe Biden became US president on 20 January. It therefore passed a by-law to delay the implementation of the legislation. In fact, there are two layers – one primary, the other secondary – underlying Tehran’s decision to boost enrichment to 20 per cent.

First, despite factional infighting in Iran’s politics, it is important to note that Iran’s ‘maximum resistance’ strategy in response to the US ‘maximum pressure’ campaign is a product of cross-factional elite deliberations, and largely continues to be so. This strategy is centred on the core idea of resisting US pressure with counter-pressure (also referred to as ‘counter-containment’) by fortifying Iran’s deterrence strategy. This is to be achieved through a gradual (and reversible) reduction of Iran’s JCPOA commitments, and by its resistance to US policies in regional conflicts (such as in Iraq, Syria and Yemen), with concomitant shows of force and/or nuisances (such as the seizure of oil tankers since the US withdrawal from the JCPOA and displays of Iran’s ballistic missile and drone capabilities), thus signalling Tehran’s readiness for war. This calculation is also based on the assessment that Washington lacks the appetite for another large-scale Middle East war, while Iran regards war with the SA as too risky and possibly jeopardising stability amid massive domestic public dissatisfaction with the regime.

Iran’s accumulated deterrence power can then be translated, the argument goes, into bargaining leverage in eventual talks with the USA. Despite some official rhetoric to the contrary, there is no alternative for Tehran to such talks as Iran’s vital interests lie in stability-threatening sanctions being eased. Iran may, in fact, be willing in future to offer more concessions that could be proportional to the amount of US pressure. But Iranians expect that pressure to ease as Biden’s administration drops the ‘maximum pressure’ doctrine. The objective of Tehran’s current stance is to achieve a return to the position Iran had held before the 2013-2015 JCPOA negotiations when its advanced nuclear programme had offered the international community the bad choice between a rock (an Iranian nuclear bomb) and a hard place (bombing Iran). That scenario had helped – along with the Obama administration dropping its ‘zero enrichment’ demand – extract concessions from the West. Above all, it realised important sanctions relief. This was precisely the Iranian strategy preceding the JCPOA negotiations.

The secondary, yet considerably less crucial, layer underlying Tehran’s decision to boost enrichment to 20 per cent is domestic politics. The Rouhani administration (headed by a ‘lame duck’ president whose two-term limit ends in August) is pitted against more hardline rivals (whose camp is in charge of the nuclear programme and currently dominates the national security discourse) who seek to torpedo the government’s ability meaningfully to enter into talks with the USA ahead of Iran’s June presidential election. Barring a Rouhani diplomatic success with Biden, with consequent economic benefits for Iran, the June election is expected to be won by a conservative or hardline candidate. Many among the hardline establishment want to reap those economic benefits themselves after the election.

However, the problem with this counter-containment/counter-pressure strategy is that alarmism alienates western powers, whose domestic anti-Iran forces will be emboldened to put pressure on western capitals not to appease or engage in rapprochement with an Islamic Republic that is seen as increasingly belligerent and confrontational. This can be seen in European reactions to Iran’s 20 per cent enrichment; European governments condemned the move as a ‘considerable departure’ from Iran’s JCPOA obligations, saying this threatened the deal’s survival.

The other 4 January show of force, the seizure of the South Korean tanker, has less to do with the official explanation that its confiscation was due to the vessel polluting Persian Gulf waters with chemicals, but is, rather, related to the freezing of an estimated $7 billion worth of Iranian assets in South Korean banks since 2019. The funds are for crude oil imports from Iran. Due to US extra-territorial sanctions prohibiting bank transfers – especially in US dollars – to Iran in particular, and US pressure in general, South Korea blocked these funds. The tanker incident happened just ahead of a scheduled 10 January visit to Tehran by a South Korean delegation. That delegation then included First Vice Foreign Minister Choi, who joined in order to hold talks about the release of the tanker. South Korea, one of Iran’s top oil importers, had dramatically reduced and even halted its oil imports as a result of the pressure of US sanctions, since Washington is an indispensable ally of Seoul. Iran’s move was intended to put pressure on South Korea to release the Iranian assets amid recent talks involving the three sides over the fate of the funds. It is doubtful that the seizure will lead to Seoul releasing the Iranian funds, since Washington’s stance will ultimately be decisive. One possibility would be, as contemplated by Tehran and Seoul, that part of the frozen Iranian funds will be used to pay for Iranian imports of COVID-19 vaccines and equipment from South Korea. South Korea subsequently asked Qatar, which has relatively close relations with Iran, for ‘maximum support’ to help release its tanker, which Doha agreed to do. However, Iran’s attempts have been futile thus far. In any case, this Iranian tanker seizure has important side-effects: it undermines the image of Iran as a reliable and stability-seeking Persian Gulf power in the eyes of East Asian powers that have become increasingly important purchasers of Iranian oil over the past decade.

* Dr Ali Fathollah-Nejad is a Non-resident Senior Research Fellow at the Afro-Middle East Centre, and a former Iran expert of the Brookings Institution in Doha (BDC) and the German Council on Foreign Relations (DGAP)