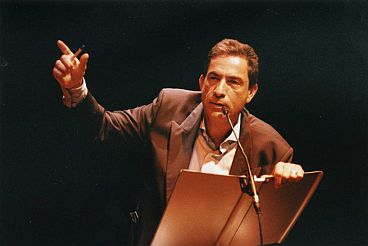 Venue: University of Witwatersrand, East Campus, Senate House 3123 (3rd Floor above the Concourse)
About Gideon Levy: Gideon Levy is an internationally acclaimed Israeli journalist, and is well-known for combining his journalistic skills with his outspoken criticism of Israeli policies. He is a member of the editorial board for the Israeli newspaper Ha’aretz, and reports for its weekly column ‘Twilight Zone’ which highlights realities in the Israeli-occupied Palestinian territories. Levy has published a compilation of his articles in books titled ‘Twilight Zone – Life and Death under the Israeli Occupation’, and ‘The Punishment of Gaza’. He was recently featured in the Al Jazeera documentary ‘Going against the Grain’. Levy’s consistent attempt to alert readers to Israel’s ‘brutal and inhumane occupation’ has earned him numerous awards including the ‘Leipzig Freedom Prize’ in 2001 and the 2012 ‘Peace Through Media Award’.

Last modified on Monday, 16 February 2015 12:00
Tweet
More in this category: Seminar: The Obama factor and prospects for Middle East Peace »
back to top