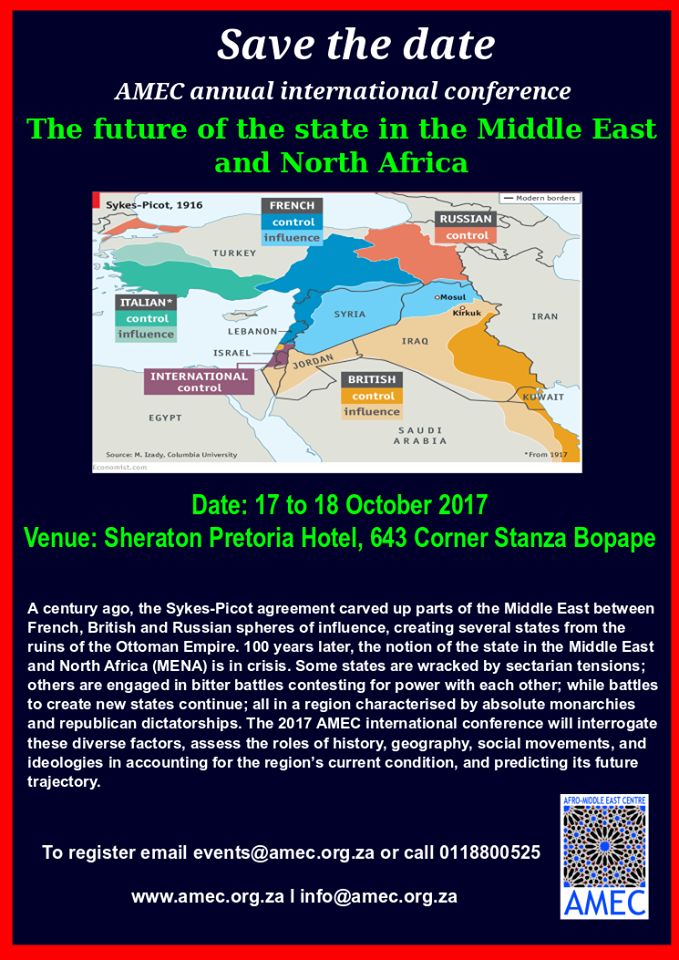 A century ago, the Sykes-Picot agreement was signed, carving up parts of the Middle East between French, British and Russian spheres of influence in the event that the Ottoman Empire collapsed. That agreement led to the formation of a number of states – as preferred by the British and French, and had a profound influence in shaping what the region looks like today. The sponsors of Sykes-Picot imposed a nation state system that has not served the interests of the people of the region. Also a century ago, penned in November 1917, the Balfour Declaration promised the Zionist movement that the British supported the creation of a Jewish state on land whose residents were not consulted. A hundred years later, the state in the Middle East and North Africa (MENA) region is in crisis, and substantial credit for that is due to these two documents.

Recently, the MENA uprisings that began in December 2010 have had a massive impact on the social contracts that previously governed state-society relations. While the gains of the uprisings (except in Tunisia) have largely been reversed, or have led to civil wars, some elites in the region sought to protect their states by quelling dissent through financial incentives; others intensified the repression that had already existed. While the region remains fragmented, most states find themselves floundering, and governance has effectively collapsed in Yemen, Libya, and Syria, there are also attempts to create new states, with varying degrees of recognition by the international community. Sections of the Kurdish population; the Palestinians; the Saharawi; and the Islamic State group have all either attempted to create states, or to get recognition to formalise states which do not exist in reality.

The concept of the state is a contested one in political theory and international relations, with various understandings of what criteria are sufficient for a state to exist, the role of recognition in the existence of states, what defines a state as a person in international law, the role of the economy (and capitalism) in defining a state, and so forth. Some of the contestation is ideological, and related to the limits on the roles and functions of a state. The role of the United Nations in defining and recognising states became crucial in the second half of the twentieth century. Nevertheless, criteria are not always applied uniformly or universally, and, often, dominant states bend definitions and offer or withhold support on the basis of their interests rather than any theories or agreed-upon definitions.

Although still contested, perhaps two understandings of the state that have become most accepted are those of Max Weber and the 1933 Montevideo Convention. Weber argued that the state was a political organisation with a centralised government ruling over a given territory, and where that organisation holds a ‘monopoly of the legitimate use of physical force’ in the enforcement of its order. The Montevideo Convention on Rights and Duties of States defines a state as a space possessing a permanent population; a defined territory; and a government capable of maintaining effective control over the territory, and of conducting inter-state relations. The questions of whether and how these approaches apply to states in the Middle East before 2010 – and since – will form part of the deliberations at this conference.

Studies of state formation in the MENA region have, in the main, focused on two key elements: political economy and social factors. The former includes the provision of rents (especially through oil resources), and ‘strategic rents’ (financial and military aid by international powers), and the influence of these on state formation. Social factors refer, inter alia, to cultural aspects and the importance of tribal affiliations in inhibiting the formation of a national identity and in enabling the provision of services on a local basis. Both these elements have allowed most MENA regimes to shun accountability to their citizens; and the provision of services by the state has often been diverted toward wealth accumulation for elites.

By 2010, in many MENA states, national identity and domestic state formation was circumscribed. Rampant corruption and increased securitisation, coupled with the 2008 global economic crisis and implementation of structural adjustment programmes saw the collapse of the autocratic bargain that resulted in populations tolerating repression and lack of political freedoms in return for (real or imagined) economic growth.

The Afro-Middle East Centre’s conference on the future of the state in the MENA region will consider these debates regarding the concept and formation of a state, and academics, policymakers and activists will deliberate on the current and future position of the state in the region.

The state: Concept and historical development

Monarchies as spoils of the Ottoman Empire

Capitalism and the MENA economic plight

Crisis of development and society

The MENA democracy and development challenge

09:00     Session 4: Impact of globalisation and foreign intervention on the MENA state

How healthy is the nation state project globally?

Displaced persons and statelessness: From and on the state

How foreign powers continue to shape the MENA state

The question of Palestine

The case of Western Sahara

Nationalist appeals in the service of authoritarianism

Developing reconfiguration of the MENA region, states and alliances