Islands for aid: A deal between Cairo, Riyadh, Tel Aviv and Washington 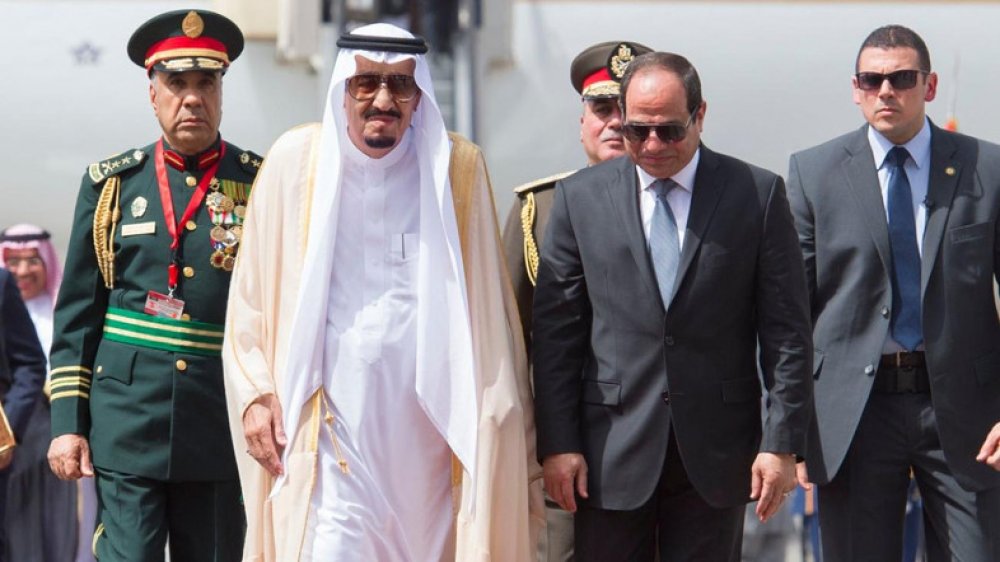 The recent handing over of two islands – Tiran and Sanafir – to Saudi Arabia by the Egyptian government emphasises that the Sisi regime remains so in need of external support to buttress its domestic control that it is willing to anger significant sections of the population. The islands’ importance to Israel and the fact that Israel agreed to the handover also point to strengthening cooperation between Tel Aviv, Riyadh and Cairo in an effort to contain Iran’s resurgence.

The announcement about the islands was made as the Saudi king, Salman bin Abdul Aziz, undertook his first official trip to Egypt since acceding to the thrown in January 2015. Other deals signed during his visit included a twenty-two billion dollar agreement for Saudi Arabia to supply Egypt with energy, and the establishment of a sixteen billion dollar joint Saudi-Egyptian investment fund. Recent tensions between the two regional powers had heightened after Egypt’s refusal to commit troops to the Saudi war in Yemen, and because of Egypt’s support for Russia's Syrian intervention. Egypt is also critical about strengthening ties between Riyadh and Ankara, and because of the Kingdom’s support for Yemen’s Muslim Brotherhood Islah party. Tensions had been simmering since Salman became king, however, with his suspicion that Egypt’s military ruler, Abdel Fatah el-Sisi, had plotted against his acceding to the throne.

Riyadh nevertheless views Egypt as an important ally in its attempt to counter growing Iranian influence in the region, and sees its large and well-equipped military as a critical deterrent to Iran’s regional forays. Moreover, Egypt’s Sidi Kerir port and SUMED oil storage terminal can be used by Saudi Arabia to slow down and disrupt Iranian oil exports. Before 2011 Iran had dispatched over 200 000 barrels of oil per day from the port, has used the storage terminal for oil shipped to Europe since diverting shipments through its own Kharg Island port causes a month delay. With this agenda, Salman has reduced his criticism of Egypt – and especially of Sisi – and continued to buttress it. Significantly, however, recent assistance packages to Egypt have been more as loans and investments than aid; only around two billion of the sixty billion in recent deals is aid.

But there is also a third player involved; for the transfer to have occurred Israel’s approval was required in terms of the 1979 Camp David Accords between Israel and Egypt. The two islands essentially block access to the Red Sea from the Gulf of Aqaba, thus blocking access to the critical Israeli port of Eilat. Israel thus regards control of the Tiran Straits and the waters around both islands as critical since much of its maritime trade passes through en route to Eilat. A perception that this access would be disrupted was a major factor informing Israel’s involvement in the 1956 Suez crisis and 1967 six day war. They were twice captured by Israel, which controlled them from 1967 to 1982. Guarantees over waterway access were thus key stipulations in the Camp David agreement. The transfer of the islands means Israeli vessels will now traverse Saudi waters to reach Eilat.

Tel Aviv’s acquiescence and statements by Israeli and Saudi officials indicate that firm guarantees had been provided by Saudi Arabia regarding Israel’s freedom of navigation through the Strait of Tiran. Israel has been informed about the secret negotiations regarding the islands from the beginning, and written guarantees that Riyadh would abide by the terms stipulated at Camp David were given in talks that involved Egypt, Saudi Arabia, Israel and the USA. (Although Israel and Saudi Arabia are officially in a state of war, they have collaborated on a number of issues recently, and Riyadh had informed Israel about then-secretive nuclear negotiations between the USA and Iran.)

For Egypt, transferring the islands to Saudi Arabia has little negative strategic implication. The islands are uninhabited, have few resources, and technically belonged to Saudi Arabia though administered on its behalf by Egypt since 1950, when Saudi Arabia requested Egypt to play this role, believing that Egypt could protect them from Israel. Returning the islands was thus an opportunity to renew Egypt’s relationship with Saudi Arabia, and to continue receiving assistance for Egypt’s stalling economy and Sisi’s power base.

The move has elicited much criticism from Egyptians, especially since Sisi had inserted a stipulation in Article 151 of the 2014 Egyptian Constitution prohibiting territorial transfers. The clause was intended to augment Sisi’s nationalist credentials, and because the army garnered support for its 2013 coup by arguing that the former president, Mohamed Morsi, was ceding parts of Sinai to Hamas, and endangering Egyptian sovereignty through his alliance with Qatar.

Sisi thus argued that the island transfer restores sovereignty to Saudi Arabia, which owns the islands, and was not a ceding of Egyptian territory. But prominent political figures such as Hamdeen Sabahi, Khaled Ali, Ayman Nour and the Muslim Brotherhood criticise this reasoning, and Ali has lodged court papers to halt the deal. Although this sees some fissures in the regime’s support base, it is unlikely to pose a significant threat.