Egypt moves closer to the abyss 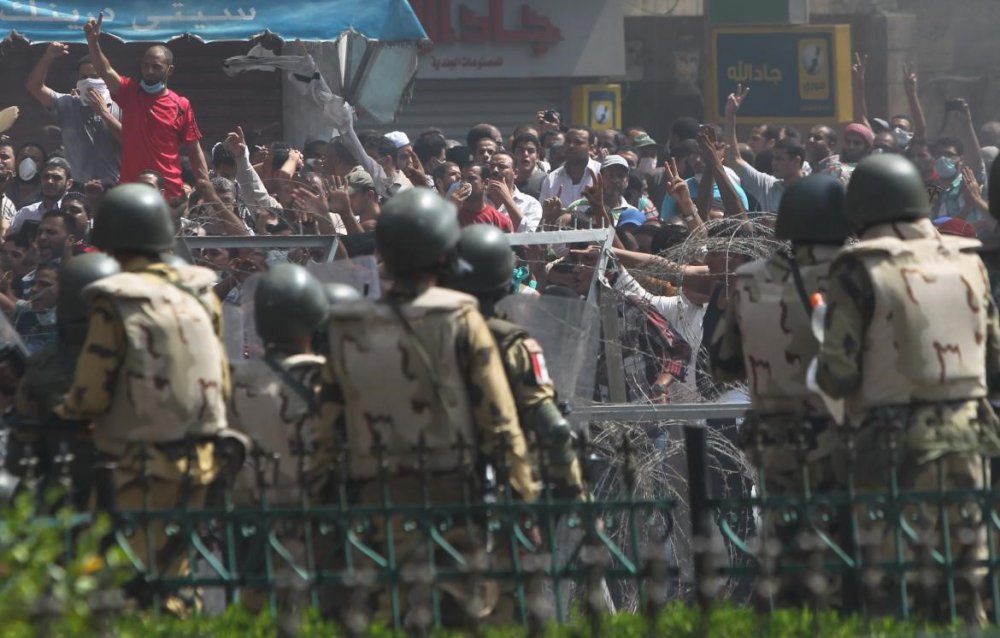 Egypt’s cabinet passed new draconian ‘anti-terrorism’ laws on Wednesday, in the wake of Monday’s assassination of the prosecutor general, Hisham Barakat. The new laws drastically reduce the already-short trial and sentencing process by eliminating second appeals for ‘national security’ trials, and increasing the punishment for involvement in ‘terrorist-related’ activities. This legislation, together with the war with the Islamic State group (IS) in Sinai, and the Wednesday assassination of thirteen Muslim Brotherhood (MB) members which resulted in the movement warning of possible violent retribution, mean Egypt is being driven closer to a state of chaos.

There is much speculation about the killing of Barakat, the most important state official to be killed in decades. Barakat demanded mass death sentences; is responsible for 41 000 arrests; and provided legal justification for the Raba’ massacre of over 1 000 protesters in August 2013. Many blame the assassination on IS; the government blames the MB – which condemned the attack; and some have even suggested it was carried out by people within the regime who are opposed to President Abdel Fattah El-Sisi. Others claim the regime might have done it as an excuse to increase repression to halt ongoing protests since Mursi’s ouster. No one has claimed responsibility for the murder.

The regime has already used the assassination to increase repression – which is already at alarming levels. Amnesty International estimates that over 41 000 dissidents were arrested in the past two years; thousands have been killed; around 800 have been sentenced to death in trials that lack basic standards of integrity; and torture, rape by security officials and disappearances of opposition figures have become common. With the new laws the atmosphere of repression will become more severe.

This week’s events could also signal another change – in the strategy and tactics of the opposition. Resistance to the 3 July 2013 coup has continued in various forms over the past two years. Protests are held almost daily, with a diverse group of people involved; bombings have become commonplace; and the insurgency in north Sinai reached critical levels this week, driven in part by IS, despite the army using aircraft and heavy artillery against militants. On Wednesday, IS launched a coordinated attack in Sinai, killing over sixty soldiers, the largest number killed in a single operation since the 1973 Egypt-Israel war. The attack saw over twenty positions simultaneously attacked, especially in the Sinai town of Sheikh Zuweid where security installations witnessed an eight hour siege. The coordinated and sophisticated attack bore the hallmarks of IS’s activities in Syria and Iraq, and is the largest operation the group has launched outside its Syria-Iraqi sphere of activity.

The new laws, expected to be ratified imminently, could ensure the death penalties handed to former president Mohamed Mursi and other senior MB leaders – including its supreme and deputy supreme guides, as well as other opposition figures, will be rapidly carried out. Sisi suggested this when he referred to Barakat’s assassination being planned by people ‘behind bars’. Executions of such high-profile leaders could push the Egyptian opposition in an increasingly confrontational and even violent direction.

The MB has hinted at such a development. This week, thirteen MB officials who were, the organisation insists, meeting to plan assistance to families of imprisoned leaders were killed by security forces in a Cairo flat. The MB’s angry response called on Egyptians to revolt, and said a point had been reached that would lead to a drastic escalation. ‘El-Sisi is initiating a new phase during which it will not be possible to control the anger of the oppressed sectors who will not accept being killed in their own houses…. Come out in rebellion and in defence of your country… Destroy the citadels of his oppression and tyranny and reclaim Egypt once more,’ its statement said. Previous MB statements were tempered, called for peaceful protests and eschewed violence. The killings may have forced it to rethink its position, and this statement, although ‘denouncing violence and murder’, warns that people’s anger is becoming uncontrollable and that a turning point has been reached.

The Brotherhood has largely managed to hold on to its support base of around a quarter of all Egyptians. However, over the past two years it has struggled to constrain some younger members from resorting to violence. As a result, a few members have opted for more violent alternatives, such as IS. If the MB now pronounces violence as an acceptable tactic, there could be a much greater resort to armed resistance, and, coupled with the war in Sinai, could result in parts of Egypt (beyond Sinai) becoming ungovernable.

The military, with the help of the security apparatuses, maintains control of the country. However, further escalation from the regime, especially Mursi’s execution, could lead to massive protests, increased violence and augmented support for IS.

Last modified on Friday, 28 August 2015 13:10
Tweet
More in this category: Mursi’s death sentence and the creation of a self-fulfilling prophecy »
back to top