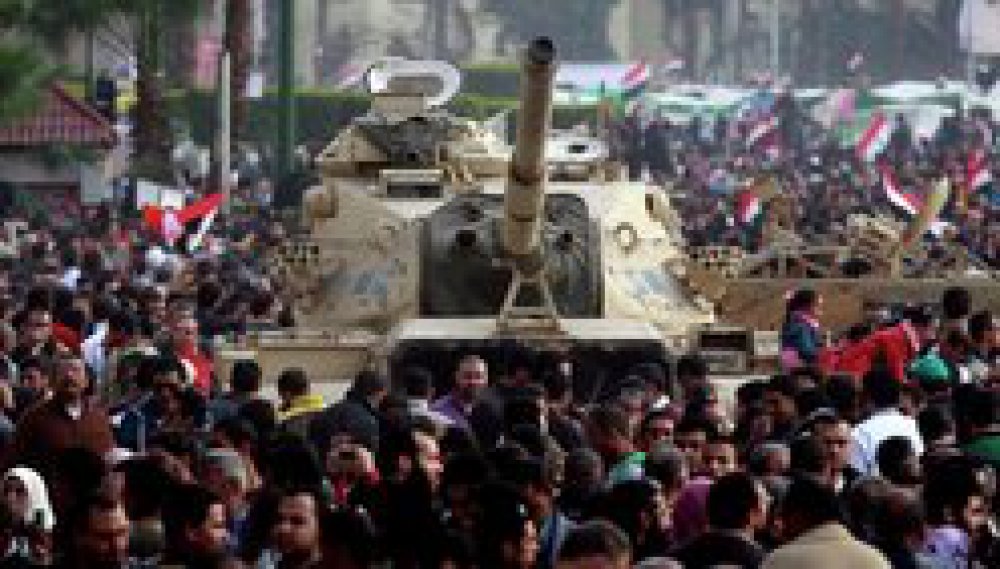 Egypt has an army based on compulsory conscription for all adult males, with conscripts drawn from all sectors of Egyptian society, and therefore integrated into the population. The military is not necessarily a united actor, and reflects a variety of backgrounds and interests, mainly separating the rank and file on one hand and the leadership on the other. One difference between the Egyptian and the Tunisian armies is that the latter was excluded from a share in the country’s wealth, and, as a result, had little interest in protecting the regime of former president Zine El-Abidine Ben Ali. The Egyptian military is not only associated with political power (since 1952, all Egypt’s presidents emerged from the military), but also with the management of the economy and its profits.

The defence minister, Field Marshal Mohamed Hussein Tantawi, heads the SCAF, and is the most powerful military figure in the transition period. Born in 1935, Tantawi started out as an infantryman in 1956, and later studied for a master’s degree in military science. He served in the 1956, 1967, and 1973 wars, all against Israel. He also served in the 1991 Gulf war to liberate Kuwait from Iraq. From 1991 Tantawi served as minister of defence and military production, and became general commander of the armed forces in 1995. He is considered loyal to Mubarak and is known for his opposition to economic and political reform, favouring regime stability instead. In recent weeks, Tantawi has given the impression that he does not have personal political ambitions, and prefers to return the armed forces to their large and comfortable arrangement in Egyptian society while civilians take charge of government. His age and ill-health are also likely to restrain any political ambition.

Lieutenant general Sami Hafez Enan has served as Chief of Staff of the armed forces since 2005. He was born in 1948, and became an officer in 1967. He was a member of the air defence service, and became a battalion commander in 1981. He also served in the 1973 war with Israel. On 10 February 2011, Enan appeared before anti-government protesters in Tahrir Square in Cairo, where he pledged to safeguard the people’s demands and their security.

The economy was at the heart of the Egyptian uprising. The young men and women who represented the backbone of the revolution were not driven by ideology; rather these young, educated, and largely unemployed people wanted to secure a dignified standard of living for themselves and their children. The political instability and absence of security that accompanied the revolution have dealt a heavy blow to the already weak economy. In the three-week uprising Egypt lost more than three million dollars a day. Tourism, a major economic sector, came to a standstill, and industrial output dropped by eighty percent.

The current military leaders in Egypt are not likely to make any significant changes to Egypt’s economic orientation. There are two reasons for this.

1.Tantawi is a strong advocate of government control of prices and production, and has consistently opposed steps to further liberalise the economy. Other members of the SCAF have not expressed opinions on economic issues, and generally lack the necessary economic knowledge or training.

2.Shortly after the overthrow of Egypt’s King Farouk in 1952, the role of the army in the economy expanded. The army runs factories, day care centres, hotels, and beach resorts, among other business activities. It also pays no taxes, employs conscripted labour, and buys public land on favourable terms. Thus, it is likely that military leaders will seek to maintain these privileges.

Finally, in order to overcome the economic crisis that followed the transformation of power, the military banned labour strikes and is likely to appeal for short-term financial assistance from international financial institutions such as the World Bank and the International Monetary Fund, and from major western powers.

As far as political reform is concerned, it must be noted that the army was the backbone of the old regime, benefited from the status quo, and has long expressed interest in maintaining stability and order; it is not known to be a pro-democracy organisation. However, by the end of Mubarak’s regime, this ‘stability’ was seen by most Egyptians as stagnation, and was a major reason for the uprising. Military leaders understand that introducing political reform and changes is a necessity. The questions they will want to answer is ‘how much’ and ‘how fast’.

The army has dissolved the parliament and promised free presidential and parliamentary elections within six months. Equally important, the army created a committee to amend the constitution and pledged to submit proposed amendments to a referendum. Some in the opposition welcomed the timetable as evidence that the officers were eager to turn over power to a civilian authority. Others questioned whether the speedy schedule might signal just the opposite; that the military might be trying to manipulate events to preserve its power by rushing the process, and denying political parties and candidates enough time to organise for a meaningful, fair election that could elect a strong civilian government.

There is no way to know the real intentions of the military leaders: whether they plan to transfer power to a civilian government, or seek to manipulate the political process. Given that the Egyptian people seem to be fed up with the phenomenon of military leaders assuming political power, and given international pressure in favour of political reform, it is likely that a civilian government will take over. This does not, however, exclude the possibility that the military will maintain important leverage.

For most of the last three decades, Mubarak presented himself as a bulwark against Islamic fundamentalism. ‘Support me or Islamists will take over’, Mubarak argued. Not surprisingly, his resignation has ignited speculation about the role that the Egyptian Muslim Brotherhood might play, and its relationship to the military. Israeli leaders, in particular, have been alarmed by the likelihood of the Brotherhood’s participation in a future government in Cairo. Their thinking is based on a mindset that is several decades old, and does not reflect two recent realities. First, the uprising was mainly about jobs and freedoms, with a clear absence of Islamic slogans. The demonstrators did not seem to be fascinated with Iran, Saudi Arabia, or any other Islamic country. Second, the Muslim Brotherhood has changed. The movement was established in 1928 and has since gone through various phases. In the last few decades, the Brotherhood denounced violence, agreed to ‘play by the rules’, and participated in elections.

The military is the most powerful institution in Egypt and the Muslim Brotherhood is the best organised movement. The two role-players have no choice but to work together; they cannot afford to de-legitimise each other. In order to alleviate concerns, Brotherhood leaders announced that they would not field a presidential candidate, and would not seek to win a majority in parliament. Thus, despite a high level of mutual suspicion, it is likely that the military and the Brotherhood will find a way to work together.

The question that is uppermost in the minds of many in Israel and the west is: will the Egyptian military (and future governments) honour the 1979 peace treaty with Israel? The answer is a clear ‘yes’, but the relationship between Cairo and Tel Aviv is likely to be cooler than it was during Mubarak’s rule. It is noteworthy that during the three-week uprising no American or Israeli flags were burned. The demonstrators were not driven by foreign agendas. Furthermore, since the late 1970s, Egyptian military officers have had close relationships with their American and Israeli counterparts. Finally, despite the Egyptian military’s massive rearming and improved training, the Israeli army is still much stronger than the Egyptian. Post-Mubarak Egypt is likely to be more sympathetic to the plight of the Palestinians, but is not likely to abrogate the Camp David Accord. Little wonder, then, that the army issued a communiqué stating that it would ‘remain committed to all its regional and international treaties and obligations’.

Which model for Egypt?

Since Mubarak’s resignation, many policy-makers and scholars have debated which model Egypt will follow. Iranian leaders have claimed that the Egyptian uprising was inspired by the Iranian revolution, and argued that a new Islamic Middle East is being born. However, many Arabs (including Egyptians) do not see Iran as a successful or appropriate model. The harsh official response to the Green Movement after the 2009 presidential election further discredited the Iranian model.

Similarly, post-Suharto Indonesia has also been touted as a possible model for post-Mubarak Egypt. After a transitional period, Indonesia now has a civilian government, with the army remaining a significant player. Egypt and Indonesia are key Islamic countries with large religious minorities. However, the Muslim Brotherhood is more powerful and better organised than Islamic parties in Indonesia. Pakistan, where the army overthrew civilian governments a number of times, is a less successful model than Indonesia.

Finally, Turkish Prime Minister Recep Tayyip Erdogan and his ruling Justice and Development Party have been able to reconcile democracy, electoral victory, economic development, and national independence together with the promotion of Islamic values and Muslim authenticity. In short, the Turkish model is the most successful between it, Iran and Indonesia.

However, regardless of the similarities and differences between Egypt and other countries, Egypt is likely to follow its own path. The military will not relinquish all its power and it is likely to maintain a significant leverage in both domestic and foreign policies in Egypt at least in the short to medium terms.

One scenario is that the military will carry out cosmetic changes but will maintain the key pillars of the deposed regime in what might be dubbed ‘Mubarakism without Mubarak’. This is not likely to happen because such a regime will not be accepted by either the Egyptians or the international community. It is more likely that the military will transfer power to a civilian government (which will include the major political powers, including the Muslim Brotherhood) while the army maintains an important role either directly or behind the scenes. The civilian government will likely create greater distance between it and the United States and Israel, but will honour its international obligations.

Last modified on Thursday, 19 February 2015 09:56
Tweet
More in this category: Egypt in the transitional phase: Precautions and polarisation »
back to top