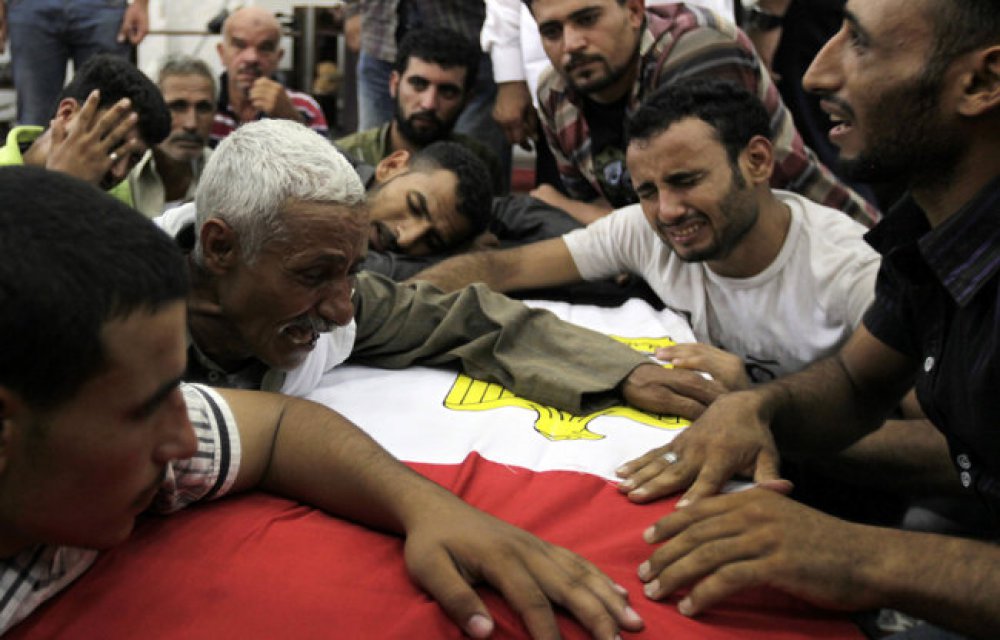 Sunday’s attack on an Egyptian border post near the Egypt/Israel border has threatened to reconfigure relations between Egypt and Hamas, and Egypt and Israel. Around thirty-five men attacked a border post near the Egyptian town of Rafah, killed sixteen soldiers, and commandeered two vehicles which were then used to cross the border into Israel. Israeli helicopters destroyed the armoured vehicle which successfully crossed the border. It is alleged that some of the men reached the post by sneaking through tunnels connecting Egypt and Gaza and that some Gazan group might have been involved.
The Rafah border crossing with Gaza was shut down soon thereafter, resulting in Hamas’ deputy leader, Moosa Abu Marzouk, complaining that this constituted collective punishment. The accusation was inconsistent with recent relations between Egypt’s president, Muhammad Mursi, and Hamas, including Mursi’s hosting Hamas leaders Khaled Mish’al and Ismail Haniyeh and easing restrictions on Palestinians travelling to Egypt. The implicit agreement was that Hamas would prevent Sinai militants from using Gazan territory to stage attacks on Egyptian soil. This week’s events have resulted in the agreement being strained. In the words of a senior Egyptian official, ‘After Egyptian blood was spilt, we will not accept words of condemnation, denials and failing to take responsibility.’
The Egyptian military responded to Sunday’s attack with operations in north Sinai aimed at ‘cleansing’ the area of alleged militants. The towns of Sheikh Zouwaid and Al-Arish were most affected. The army even employed helicopter missile strikes for the first time since the 1973 war with Israel that Egypt has used airpower in the Sinai.
In a move indicating increased cooperation between Egypt’s presidency and military, Mursi terminated the contracts of his presidential guard’s commander and of Egypt’s intelligence chief. He also requested that the defence minister, Muhammad Hussein Tantawi (who is also the head of the armed forces), appoint new chiefs for the military police, the police’s central security and its Cairo head office. The move came after a meeting of the National Defence Council, in which the military holds a majority. It is noteworthy that the military responded to the attacks only after Mursi requested it took ‘control’ of the peninsula. It seems clear that cooperation between the military and the presidency is increasing and that both are reading from similar security scripts.
The attacks also threatened to reconfigure relations between Egypt and Israel which have faltered since Egypt’s president Hosni Mubarak was deposed. Israel has long complained about Sinai militancy and two days before Sunday’s attack it issued an advisory calling Israelis in the Sinai to return because ‘terrorist organizations in the Gaza Strip and additional elements are actively planning to perpetrate terrorist attacks’. This gives some credence to the Muslim Brotherhood and Hamas allegation that Israel knew of or played a part in the attacks. Israel subsequently sent condolences to Egypt and said it would favourably consider requests to increase Egyptian troop presence in Sinai. Israeli defence ministry diplomatic-security bureau chief Amos Gilad commented that the Egyptian response was an attempt to impose order. Clearly, Wednesday’s army raids and missile attacks were approved by Israel since the Camp David Accords do not allow Egypt to undertake such operations without Israeli approval.
We could see more such attacks from the Egyptian military in Sinai – with the express approval of Israel. However, violent responses to the Sinai problem did not work during the regimes of Mubarak and Sa’dat, and will only temporarily postpone the problem. Perhaps the comment by a Suraka tribe elder points the correct way forward. He said, ‘We didn’t expect them (the Egyptian government) to leave us living off scraps of land while they built skyscrapers around us.’
The best way of dealing with the Sinai militancy problem, and one that is often ignored, is to address the legitimate grievances of Sinai inhabitants. Over a quarter of Sinai’s 600 000 inhabitants do not have Egyptian citizenship and, thus, are unable to obtain employment or legally purchase land. Many are not allowed to serve in the army. Survival tactics include involvement in the arms trade and a resort to violence to make their grievances heard. Two extremist groups do operate in the Sinai – Takfir Wal Hijra and the Salafi Jihad strand, but their attraction is as a result of the socio-economic conditions faced by the tribes. It is unlikely, however, that either of them carried out Sunday’s attacks because no one claimed responsibility – an important recruiting tool of these groups.

Last modified on Thursday, 19 February 2015 10:09
Tweet
More in this category: Mursi in his third month in office: Strengthening the domestic situation and accelerating foreign steps »
back to top