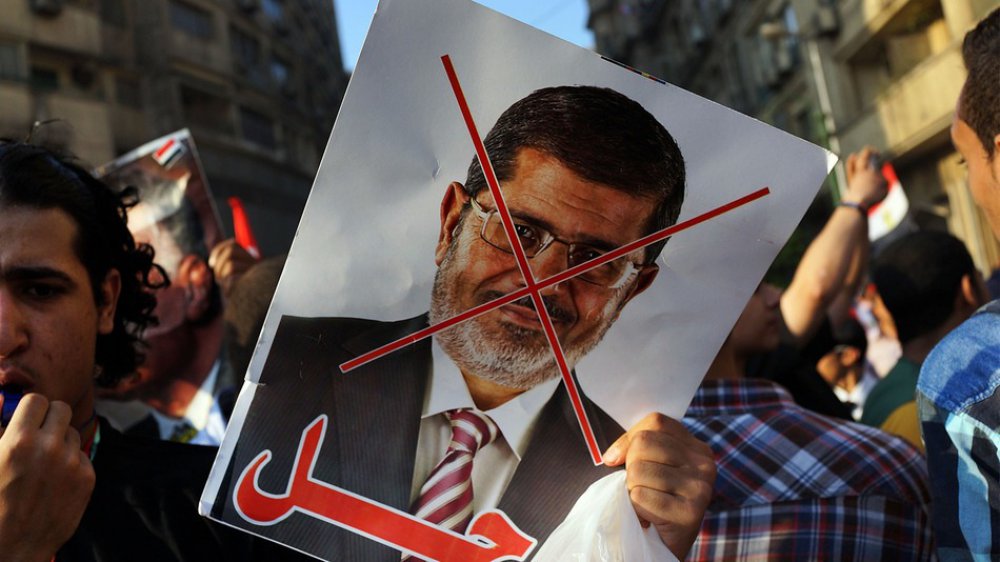 This reading of Mursi’s overthrow begs the questions why those engaged in the action were unable to confer any degree of legitimacy upon it, and why its success seemed questionable. The most that Sisi could have achieved was to push Egypt to a long period of instability.

The road to the coup

There is no doubt that Mursi made mistakes in the management of the country’s affairs, and that, among these errors, there were many that provided ammunition to his opponents. However, these errors definitely did not include the act of imposing an Islamic programme on the country, or of ‘Ikhwanisation’ (or ‘Brotherhoodisation’) of the state. The issue of Islamisation was not a subject of tangible controversy in the unfolding of the coup. After the entire state apparatus turned against the president, it seems that charges against the president were just political propaganda.

Along with miscalculated political actions, such as the November 2012 constitutional declaration, Mursi committed two major errors. First, his excessive confidence in the new military leadership, the head of which – Sisi – he himself appointed after the termination of dual power centres and after the disempowering of the Supreme Council of the Armed Forces (SCAF) in August 2012. Second was Mursi’s reluctance to perform a deep and advanced cleansing of the state apparatus when his popularity was strong. The results of these two mistakes manifested in the failure of the administration, of Mursi and his government, in the face of a series of life crises that led to the escalation of discontent in the ranks of increasing sections of the Egyptian people who were caught between the hammer of an antagonistic media with unprecedented hostility to the president, and the anvil of the growing difficulties of life.

The shift in the position of these groups towards the president is an indicator of the danger of the worsening situation of the president and the country, in spite of the controversy about the size of these groups in the 30 June protests. Regardless of the failures or successes of Mursi’s administration, there was no way for him to win over other sectors of society, such as supporters of the former regime, Copts, or the extreme opposition to Islamic participation in power.

This is at the level of the interaction of these events, but behind the coup there was another larger and deeper reason, which relates to the special relationship between the army and the state, which was never reflected in a constitutional formula, and never followed a singular pattern since the birth of the republic. What Egypt has known over the past sixty years, regardless of any volatility, is that the army was always a partner in ruling the country even though it did not receive the mandate for managing the process of governance. Perhaps the army's move away from Mubarak’s regime in its last years was due to the fact that its leaders realised the serious intention of Mubarak to pass on power to his son in a form of hereditary rule, thus threatening the position and the role of the armed forces in directing the country’s future. Mubarak’s son, Gamal, was after not a military person.

Mursi, of course, was aware of this entrenched feature in the political system of the republic. Perhaps he believed that the gains and demands of the popular revolution, on one hand, and its success in overthrowing the military council, on the other, had provided him with sufficient legitimacy, and had created a favourable environment to build a civil state and rebuild the army in a manner that it would exclusively be for defensive purposes. It is noteworthy that the three examples given by Sisi in his 3 July speech, all blame the president for refusing military intervention in political affairs.

At this stage, it is unclear whether SCAF had already taken a decision regarding the need to bring about political change in the country earlier. But it is clear that the military leadership moved towards a coup. The action of the military leadership on the evening of 3 July is an unprecedented step in the history of Egypt, even including the coup at the founding of the republic in 1952. This is because every major change witnessed by Egypt in its system of governance – the departure of King Farouk in 1952, switching to the republic system the following year, Gamal Abdel Nasser’s stepping down and then returning to the presidency in June 1967, Farouk’s stepping down, and the assumption of power by the military council in February 2011 – had been under some form of legal cover, regardless of the tenuousness of this cover.

This time, there was not any form of legal cover. It is now known is that the commander of the armed forces, the foreign minister of an Arab state, and then late mediation led by a US ambassador, attempted, in the hours before the coup announcement, to persuade President Mursi to agree to remaining in office until the end of his term in a symbolic capacity, in exchange for his accepting the appointment of a new head of government agreed upon by the opposition and the army command. If Mursi had accepted this offer, it would have been an actual change that had occurred within the system of governance, in a legal form and with legitimate cover. But Mursi, who always believed that he had been entrusted by the people to protect the constitution and the state, saw the proposed deal as a betrayal of his duties as president, and rejected the offer. It was this attitude that laid the foundation for the dilemma of the coup – that it possessed no garment of legitimacy.

All indications are that the military leadership and the leaders of the NSF, which supported the coup, did not expect any great reaction. The Egyptian media, including the official media, presented the situation as the country witnessing a massive uprising against President Mursi and his remaining in office, and did not see, or did not want to see, the size of the crowds that came out to support him. Perhaps they believed that the series of hurried procedures that were taken immediately after the coup announcement – such as the arrest of Mursi and his aides, the arrest of Muslim Brotherhood leaders and other Islamists, the imposing of travel bans on hundreds of people, and shutting down a number of Islam-orientated satellite television channels, including the Brotherhood’s Egypt 25 – would be sufficient to thwart any possible reactions.

This was confirmed on Friday when, towards the early evening, millions of supporters of the president and of legitimacy gathered at three prime locations in Cairo, and at other sites in dozens of Egyptian cities, and the crowds began to control the headquarters of the local administrations, the symbols of power and governance, in seven of the country's provinces. On that eventful Friday, the death toll reached thirty, almost all were supporters of Mursi and legitimacy.

Friday’s events confirmed that Egyptians are divided, that no party can say that the majority of Egyptian people support and stand behind them, and that the coup faces a real dilemma. Those who supported the coup did not expect such a reaction.

On the Arab and regional levels, Saudi Arabia, the United Arab Emirates and Jordan scrambled to welcome the coup and to congratulate the interim president. It is significant that Sisi, and not the interim president, had contacted both Saudi King Abdullah and UAE’s Sheikh Khalifa on Friday, 5 July. Additionally, Qatar recognised the new situation as a fait accompli. The Syrian president, Bashar al-Asad also welcome the coup, while the Iranian position ranged from fear of the consequences of the coup to gloating against President Mursi who had taken a firm stand on the Syrian crisis a few weeks earlier. On the other hand, Turkey described the event as a coup, refused to recognise it and warned of the consequences.

Internationally, the United States and the European Union have taken ambiguous positions. They have been reluctant to describe what happened as a coup, but have not welcomed it either. It seemed as if the western powers were waiting to see whether the new regime would be able to consolidate itself, but had no fundamental objection to the overthrow of Mursi, in spite of the uneasiness they might feel regarding the method of the coup. Of course, this ambiguity raised questions about the US role in these events, especially since the United States maintains close ties with the Egyptian armed forces. The truth is that it is difficult to say whether Washington was a partner in the army’s decision to overthrow the president, or whether it had entered only as a mediator between the parties after the crisis had developed. Certainly, Washington continues to play a mediation role, directly and indirectly, and perhaps through Qatar and Turkey, after the size of the opposition to the coup became clear on 5 July.

It is now clear that the coup will not proceed easily and smoothly, and that the attempt to disguise it as a response to popular demands did not succeed. Where will Egypt go from here?

The best result that those who have undertaken and supported the coup can hope for is that the country will be cast into a lengthy period of instability. This time, instability will not result from Egypt returning to a transitional mode, but from the structural defect in its political system. This is because of a number of reasons:

To protect the country from the dangers of extended instability, we have to return to dialogue. The shortest path of dialogue, of course, begins with the return of President Mursi to office, reinstatement of the constitution, abolition of the extraordinary measures that have been taken since the evening of 3 July, and the start of a national dialogue. This dialogue will arrive at a roadmap charting a way out of the crisis, and will be agreed upon by the majority, if not all, of the political forces. But this may not be the only path of dialogue, if the opponents of the coup continue the popular movement demanding the return of legitimacy.