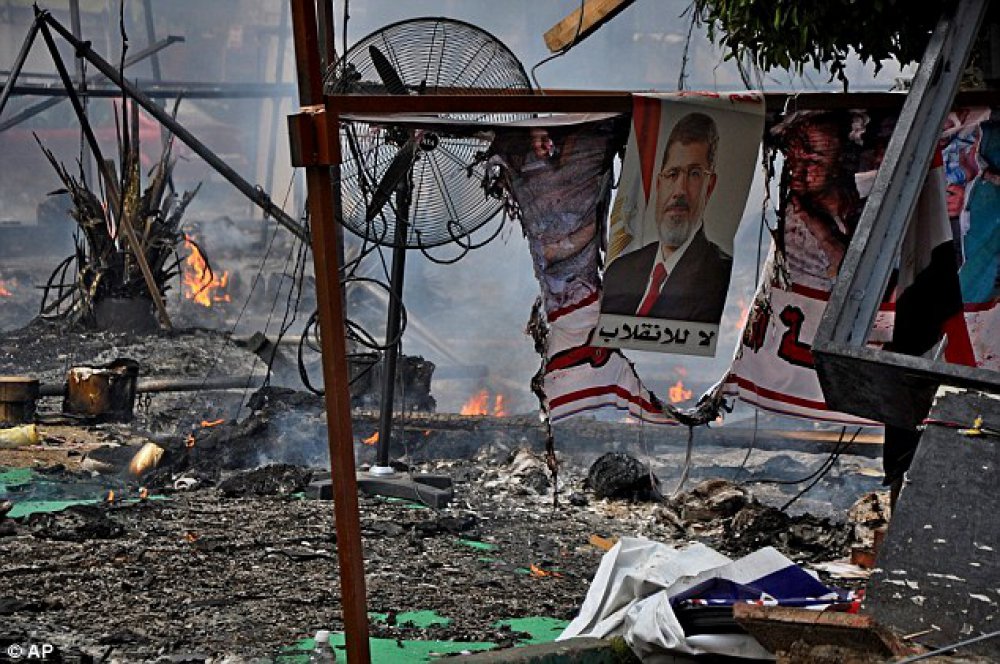 The massacres began on Wednesday morning, and led to more than 1 000 deaths (2 600, according to the Muslim Brotherhood) of largely unarmed protesters encamped at Nahda Square near Cairo University, and Raba’a al-Adawiya Square in Nasr City. Many were killed by bullets to the head and chest; many after security forces incinerated protest tents, burning to death many protesters. The attacks followed two previous violent actions against the protests: the massacre outside the Republican Guard Club, resulting in over fifty deaths, and the 27 July massacre at the Raba’a al-Adawiya, resulting in over 100 dead.

Liberal groups’ backing for the military’s actions gave the regime a veneer of legitimacy to proceed, and will likely see the worsening of an already tense domestic polarisation between Islamists and ‘secularists’. The liberal Wafd party accused the Brotherhood of being responsible for the deadly spiral of events, and for ‘defiance of the state’. They argued that authorities were compelled to disperse the sits-ins after ‘the people’ had mandated the army to fight terrorism on 26 July. Leader of the Popular Current, Hamdeen Sabahi, asserted, ‘We support the people, army, and police against terrorism.’

Interestingly, simultaneously with the attacks in the two squares, a number of churches and police stations were attacked and burnt. It is possible that some from within the anti-coup alliance of forty organisations or their sympathisers have been involved in these incidents. But the timing has led some to suggest that agent provocateurs from the interior ministry were responsible, as they were in the torching of a church in 2011. The Muslim Brotherhood insists it is against the use of violence, and has repeatedly advocated peaceful protests. The killings by the security forces increased today, Friday, as protests took place after the Friday prayer. Scores of people were killed today.

These events, which have in part occurred as a result of the relative inaction, and in some instances, tacit approval, by state actors such as the USA and various Arab states. The massacres, however, have resulted in some change in tone from the international community. The USA and EU have expressed ‘serious concern’, urging restraint, while the French Foreign Minister Laurent Fabius called for the formulation of a common unified international position against the violence. Today, Germany’s Angela Merkel said her country and the European Union were reconsidering their relations with Egypt. South Africa’s condemnation was robust, referring to ‘pro-democracy’ protesters and to Egypt’s ‘interim authority’ rather than ‘interim government’. The strongly worded statement from the Department of International Relations and Cooperation called for the release of political prisoners, and argued that the massacre was a setback to the democratic aspirations of Egyptians as expressed last year. However, apart from Denmark – which suspended its five million dollar aid projects – no state has taken any practical action; the USA even refrains from calling the events of 3 July a coup. The African Union’s silence is noteworthy, especially after its earlier strong statement condemning the coup, and Egypt’s from the continental body. Saudi Arabia has bucked the trend, with King Abdullah issuing a strong statement supporting the Egyptian military and calling on all ‘leaders of Muslim and Arab states, wise men and scholars’ to unite in support of the Egyptian regime against ‘terrorists’ and those who ‘are attempting to destabilise Egypt’.

The massacres on Wednesday and today, and the ongoing repression over the next weeks, will probably have a serious impact on the future of political Islam in the region. One likely consequence will be the growing influence of the conservative Salafi strand of Islamism, represented in Egypt in the Nour Party, which supported the coup, and will participate in the military’s ‘roadmap’. The theology and politics of some of these groups is characterised by sectarianism, hatred of people of other faiths, and suppression of women’s rights. These are the forms of Islamic politics promoted by the Saudis and the UAE. A more violent form of Salafism, as espoused by groups such as al-Qa’ida, could also become resurgent.

If the events of this week are any indicator, the future for Egypt is bleak, and might see another long period of military dictatorship, with a sham ‘democracy’, and a suppression of the basic rights of free speech, movement and political expression.

Last modified on Thursday, 19 February 2015 10:20
Tweet
More in this category: Egypt, preparing for a massacre? »
back to top