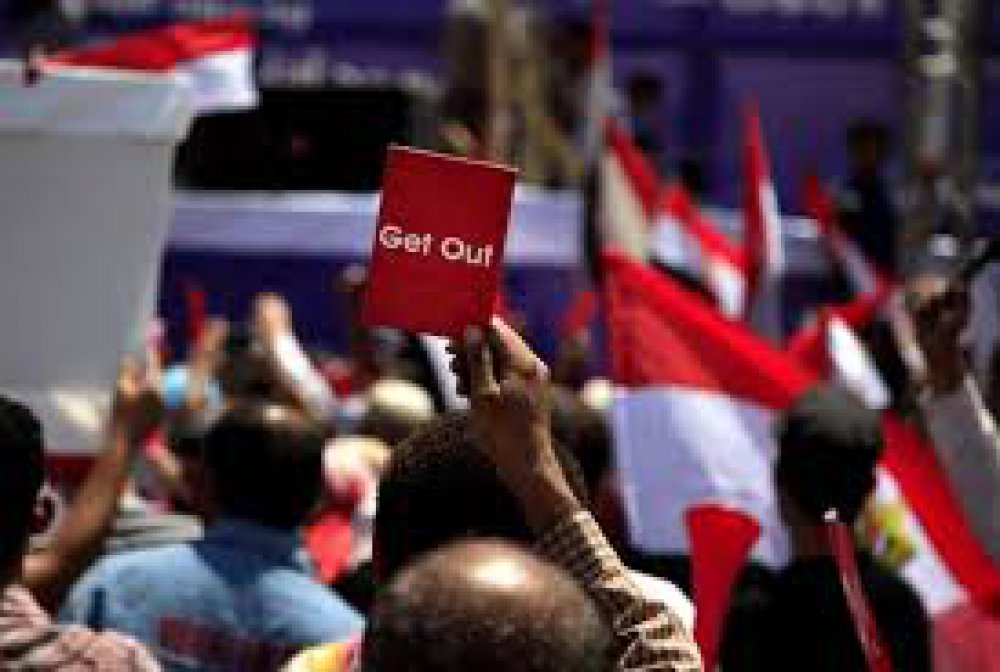 The protests and subsequent actions were largely instigated by a protest movement called ‘Tamarrud’ (rebel), founded in April by disillusioned Egyptians seeking Mursi’s ouster. It claims to have gathered twenty-two million signatures calling for Mursi to be replaced by its constitutional court president Adli Mansour. Initially, Tamarrud was ignored by Egypt’s main opposition groups. However, as the campaign grew in strength, political opposition figures began aligning with the campaign, and organising meetings to chart a postMorsi transition. Even Mubarak supporter Ahmed Shafiq signed the petition. Opposition leader Hamdeen Sabahi publicly said that if Mursi refused to resign, the military should oust him. Mursi’s Freedom and Justice Party (FJP) and its supporters launched a counter campaign called ‘Tagarrud’ (impartiality), emphasising that the president was democratically elected, arguing that he be allowed time to implement his policies, and that remnants from the Mubarak era were involved in Tamarrud.

These events are a symptom of the existing and increasing political polarisation Egypt is experiencing, pitting ‘secularists’ against ‘Islamists’. To this end, the Mubarak-supporting judiciary has been utilised for political goals, and both sides have made charges against the other of ‘secularisation’ and ‘brotherhoodification’ respectively. This has filtered to the population, and has seen the hardening of these stances, increasing the chances of large scale violence.

The culmination were the massive (still continuing) 30 June anti- and proMursi protests, which brought the country to a halt. FJP offices have been burned down – an indication of Mursi’s tenuous control over the interior ministry; around twenty people have been killed and over 700 injured, and the prime minister and ministers of foreign affairs, communication, legal affairs, water utilities and tourism have resigned.

Tamarrud's appeal is largely a result of two factors. First, its call for Mursi’s resignation has meant that disparate opposition figures have coalesced around the campaign, using it to regain ground lost over the past five electoral and voting processes which saw the FJP and other Islamists win a referendum; get over seventy per cent of parliamentary seats; Mursi elected president; and winning a referendum to pass the new constitution with over sixty per cent of the votes. Second, the postMubarak Egyptian economy has weakened as a result of Mubarak’s ouster and lack of investor confidence. Tourism has decreased, the Egyptian pound has depreciated against the dollar, and the country’s foreign reserves have dropped by over half. This has meant that the Mursi administration has had to fight off ‘bread protests’, ensure wheat security, and sustain fuel purchases and subsidies. It has failed at the last, leading to fuel shortages and a virtual economic standstill. This has caused many in the ‘middle class’ to resent the administration, believing that its ousting will miraculously alleviate the problems.

The big questions are: what will the military announce this afternoon, and what scenarios are possible thereafter.

The army may force the administration and opposition into negotiations, but this now seems unlikely. It is more likely that the army brass will suspend the constitution, parliament and the president – effectively engineering a coup – and setting up a new leadership council to which a new prime minister – likely to be army head Abdel-Fattah Sisi – will report. Is it an accident that this ‘roadmap’ and the proposals of the new 30 June Front, led by Mohammed Elbaradei, are similar? This will result in fierce opposition from various Islamist groups and could result in violent clashes, possibly paving the way for a full military take over. A civil war, as suggested by many commentators, is, however, unlikely. Already the High Command has asserted that it will protect the country from ‘terrorists, radicals...and fools’ - words that echo many of Husni Mubarak’s speeches.

Last modified on Thursday, 19 February 2015 10:58
Tweet
More in this category: Egypt at a crossroads: Difficulties, divisions, and the fall »
back to top