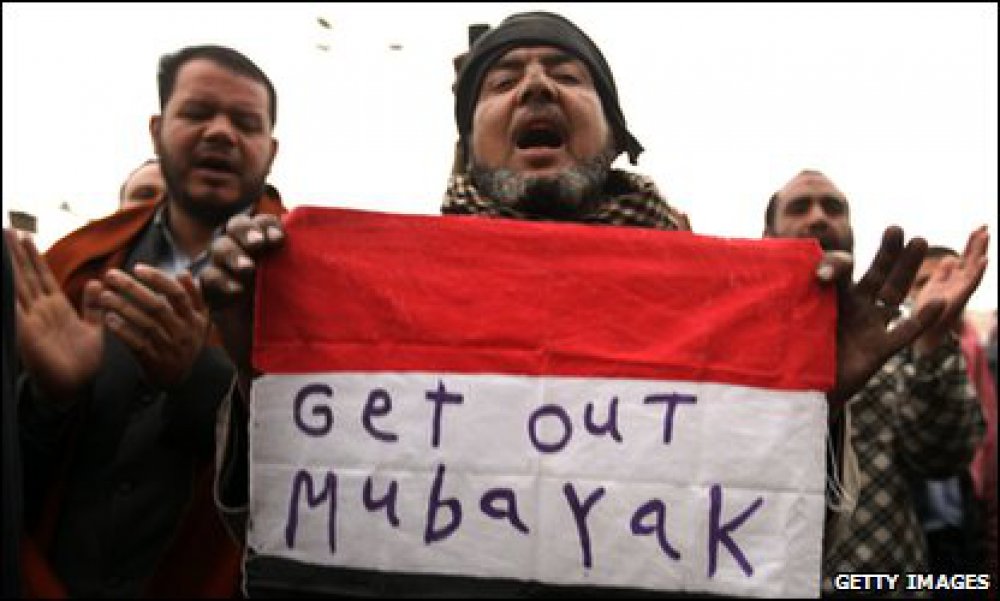 Within hours, Mubarak’s announcement was followed by a call by the army for people to end the protests and return home, or face the prospect of violence. Not long thereafter, in a coordinated action, supporters of Egypt’s ruling National Democratic Party descended on protesters in various cities, assaulting them, and rode into the protesting crowds with horses and camels, sparking clashes that lasted many hours. Soldiers on the scene did nothing, allowing the chaos to continue unhindered.

From the beginning, the regime’s response to the uprising, which started on the January 25, was crafted by the military, in a way that would help maintain the status quo, allowing it to control politics in the most populous Arab country.

Mubarak, who is very ill, and, according to most observers, will likely not be alive for the September elections, first responded to the protests by dissolving his Cabinet and reappointing new ministers. General Omar Suleiman, the minister of intelligence who has a background as a master of torture, was appointed vice-president, and most other new appointees were members of the military. The Egyptian military has controlled politics in that country since Gamal Abdel Nasser’s presidency, and the president has always been from its ranks.

When protests increased in size, the next response was Suleiman’s announcement this week that Mubarak had instructed him to begin negotiations with opposition parties. Then came Mubarak’s speech, saying he would not stand for the election in September, and would begin a process to amend the Constitution. Meanwhile, opposition parties, including the largest, the Muslim Brotherhood, were coming together to knock together a coalition that would be able to talk to the regime.

These developments point to a planned strategy by the military to regain control of Egyptian politics and to ensure the persistence of the status quo—with some concessions to the people and the opposition. Clearly, the military has decided that Mubarak has become a burden, and is easing him out. But, his being from among their ranks, the army would prefer not to humiliate him and hang him out to dry. Instead, they will keep him as president, while Suleiman begins a negotiation process with opposition parties. The regime hopes that the beginning of the negotiation process will end the protests, that fatigue, the threat of a food crisis, and the attacks on protesters by NDP thugs will force demonstrators off the streets and back to their homes and jobs. Further, if the clashes between protesters and NDP supporters continue, the army will use that as an excuse to crush the protests, claiming it to be in the interests of law and order. And, to finally ensure that the protests end, Suleiman has already announced that no dialogue with the opposition can begin until protests are halted, effectively making the end of protests a precondition of negotiations.

Once the negotiations begin, the regime will attempt to drag it out until September, making the call for Mubarak’s early resignation irrelevant. Opposition groups, however, clearly believing that they have the upper hand, have made Mubarak’s stepping-down a precondition for entering negotiations. If the protests are crushed by the military, as is likely, the superior negotiating position will be in Suleiman’s hands, and the opposition will be unable to leverage their precondition.

Meanwhile, the regime will effect amendments to the Constitution as a way of appeasing the opposition. It has already announced—unilaterally—that amendments will be effected within 75 days of February 2, and without the involvement of opposition parties. One of the objectives of the regime in the intervening period will be to create divisions within the opposition, emphasising differences between the leftist, nationalist and Islamist opposition groups, and between Muslims and Christians. Any divisions in opposition ranks will serve the regime’s agenda and allow it to dictate the political changes that will take place.

In the period before the September election, any protests that take place could be addressed by co-opting individual members of the opposition into the Cabinet, or even creating a presidential council with Mubarak at its head, and including former IAEA head Mohamed ElBaradei.

The military chiefs have played their cards very well. When police were pulled back from the demonstrations—after having caused numerous deaths—the soldiers moved in, but did nothing to quell the protests. Indeed, the impression from protesters was that the army was there to protect the people. Military chiefs have ensured that the military took no action against protesters, cultivating the image of the army as benevolent protectors—which could serve it well now and during the negotiations process. It is possible, however, that as the violence against protesters continue, some members of the middle and lower ranks of the army will join the protesters.

The end game for the Egyptian military is one in terms of which it can strike a deal with the emerging power-brokers—ElBaradei, and other opposition figures—where the political influence and economic interests of the military are protected under a new dispensation, and where it is able to maintain a direct relationship with American and European military structures. This will ensure that, even if democracy emerges in Egypt, the military is able to maintain its domestic power, and continue to fulfil the foreign agenda to which it is committed. To ensure that the military will continue fulfilling such an agenda, Western - especially American—officials have been in close contact with the new vice-president, new prime minister and other leaders of the military over the past few weeks.

The Egyptian regime and the military in particular from the presidency of Anwar Sadat, have fulfilled Western, especially American, objectives in the region. In particular, the Camp David accord between Egypt and Israel, and the subsequent role of Egypt has ensured that Israel has been well served. Indeed, as a result of that accord, Israel has been able to decrease its military spending and to rely on Egypt to, for example, maintain the siege on Gaza, a key recent tactic of Israel against the Palestinians. If ElBaradei becomes the new president after Mubarak, the army will be able to rely on him to support—even if uncomfortably—this agenda. If the military loses its political influence, and becomes completely subject to civilian authority—an option that it will fight against—the balance of power in the region insofar as the Palestinian-Israel issue is concerned could change dramatically.

* This article was published by the Mail and Guardian

Last modified on Thursday, 19 February 2015 11:03
Tweet
More in this category: Colonial treaties and equitable Nile water sharing »
back to top