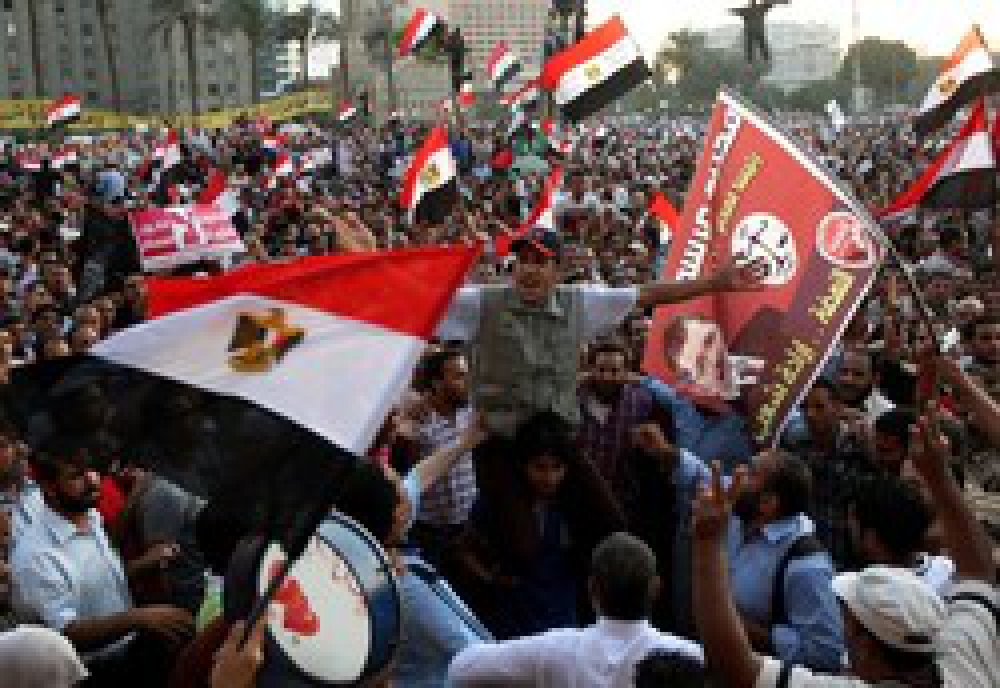 The resolutions and practices of the Supreme Council of the Armed Forces (SCAF) have proven day after day that when it intervened to force President Husni Mubarak to step down, it was not serving the revolution as many (including myself) believed but was rather seizing power in a white revolution that was planned with utmost precision in accordance with scenarios that relied upon a gradual approach to abort the revolution and keep Egypt hostage to American obedience.

The hereditary handing-down of power that was opposed by so many Egyptians has been fulfilled, not from President Mubarak to his detested son Gamal, but to the military establishment. In other words, power has returned to the military but in an open and clearly broadcast manner and not indirectly as was the case in the Mubarak era.

The comprehensive constitutional decree that was hastily announced by the Supreme Council of the Armed Forces (SCAF) on the eve of the second round of presidential elections, a day after parliament was dissolved and the Isolation Law was rescinded, is a clear undermining of the election process, a strangling of democracy and an abortion of the Egyptian revolution.

The military, in coordination with Washington, stole the Egyptian revolution in order to protect American interests in the Arab domain at this sensitive time when Washington is preparing to go to war against Iran and Israel's existential anguish is most pronounced due to the Arab revolutions.

Doctor Muhammad Mursi, the Muslim Brotherhood's candidate, may have won presidential elections and is therefore Egypt's president in theory, but he will be a 'fat-free' president, with no tricks up his sleeve nor any capacity; he will be isolated in his office with no real powers. In spite of the fact that Mursi will enjoy executive authority, legislative authority will remain in the hands of the military, his real opponents. As such, the most that he will be able to do in this situation, if he chooses to hold on to the post, is ceremonial duty where his authority and powers will be reduced to welcoming and bidding farewell to Egypt's royal and presidential guests, in addition to posing for photographs with them.

According to SCAF's constitutional decree, the president is not able to take the decision to go to war without first consulting the military council and getting its permission, and also obtaining the permission of parliament. The president is also not able to object to the military's authority to arrest and prosecute civilians in military courts under the guise of maintaining security.

Does it make any sense that President Husni Mubarak and before him Presidents Muhammad Anwar Sadat and Gamal Abd al-Nasser all had the authority to declare war and enjoyed all the constitutional powers of a president even though they were not elected by the people, while a president popularly elected in free and fair elections has none of these powers, especially after coming into power in the greatest popular revolution in the history of modern Egypt?

President Mursi's central problem is that he is not America's choice for the job, nor does he enjoy the pleasure and blessings of Israel. Part of the problem is that he studied in the USA and taught at its best universities and is therefore not an ignorant president; he wants to return dignity to Egypt and its people and free them from worshipping America, in addition to wanting to liberate Egypt from the humiliating and degrading military aid of the USA.

Egypt is gradually moving away from the revolution and is quickly returning to the Turkish experience before the AK Party under the leadership of Recep Tayyip Erdogan, when the military was the de facto ruler of the country and used to take recourse to military coups to prevent the Islamists from taking power through the ballot boxes. In the process, the military found support and loud applause from the civilised West which day and night professes the beauty of democracy and its opposition to military rule.

There is an explicit and frank American resolution that is preventing the Islamists (and dignified nationalists) from taking power and which supports those associated with America's projects of domination and war in the region for the control of oil and gas and the entrenchment of the Israeli occupation of Arab and Islamic lands.

We are not calling for the deification of presidents, nor for granting them absolute powers, but neither do we support military rule and the placing of all power in the hands of the generals, thereby transforming Egypt into a military state that swims in an American orbit, like the banana republics in South America several decades ago.

The Egyptian people have granted the new victorious President a mandate to root out corruption, to transform Egypt into a sovereign state, an economic tiger and a great regional power and to deal with others on the basis of equality. However, how will President Mursi be able to achieve all this – the sum total of the demands of the revolution – if he is handcuffed and left unsupported by a legislative authority and stands in the shadow of the security and military establishments?

We do not believe that the initiative being portrayed by the military council day after day to abort the revolution is of its own making; there is a hidden force whose bidding the military is doing, some of it is internal but most of it is from the outside.

The military council has used shock therapy to deal with the revolution, administering soft and successive bursts and relying upon a constitutional court whose chief and judges were personally appointed by President Mubarak, bringing Egypt to the point of chaos, disorder and stress, causing many to lose confidence in the revolution.

The Muslim Brotherhood has been forced to confront tough decisions. It will have to continue exercising self-control and avoid taking recourse to violence after being robbed of its legislative parliamentary victory and seeing its president stripped of effective authority. It should follow the Algerian example and take to the streets.

The Muslim Brotherhood is not a 'Jihadist' movement that relies on violence; it has in fact been exposed to strong criticism by the Jihadists themselves because of the peaceful approach it has adopted over the last fifty years. However, the unrelenting knocks that the Muslim Brotherhood is being subjected to may push it to embrace violence or to face a splitting of its ranks – both of which are unsavoury prospects. This is probably what the military council and its black-ops room operatives want.

Until the Muslim Brotherhood decides on its next step, we ask the new president not take the constitutional oath before a military council that has stripped him of his powers, nor before constitutional judges that have dissolved a parliament in which the Muslim Brotherhood has won the majority. He should rather take the oath of allegiance before the people in Tahrir Square because these are the people that have chosen him. It is also from Tahrir Square that the march to reset the political scene should begin, to undo the Great Deviation that aims to steal and abort the revolution.

Last modified on Thursday, 19 February 2015 11:10
Tweet
More in this category: Egypt’s constitutional decree crisis: Extensive powers and a crumbling base »
back to top