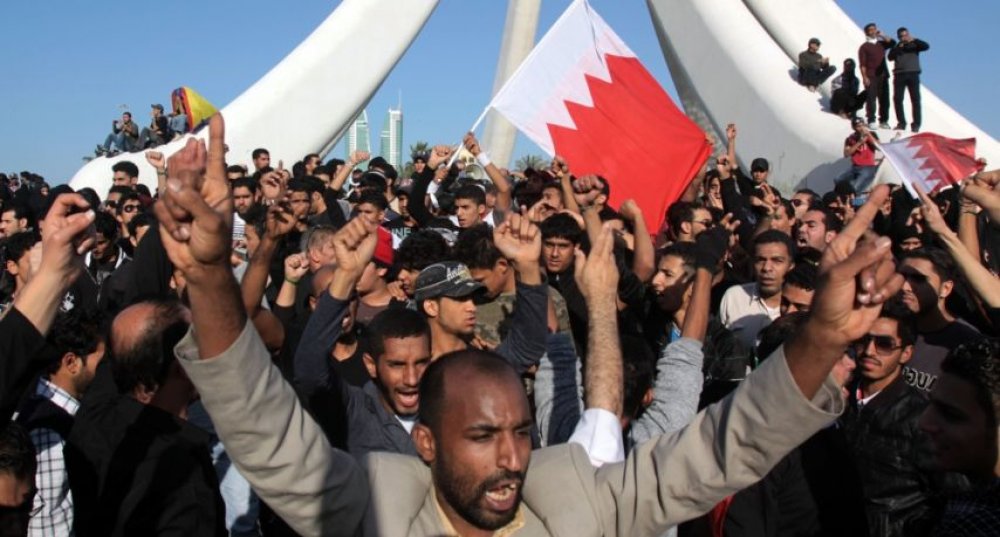 Published in Bahrain
Tagged under

On 5 March, the upper house of the Bahraini parliament passed a constitutional amendment which, critics say, will result in the country living under undeclared martial law. The amendment allows for civilians to be tried by military courts when the case involves the military. This was followed the next day by the justice ministry filing a lawsuit to ban the Wa'ad party, the second biggest opposition party after the now-banned Al-Wefaq party. The repression of dissent in Bahrain is clearly increasing.

The suspension of civil liberties implicit in this amendment as well as the removal of limitations in the constitution on who may be tried by a military court are both characteristics of martial law. When this amendment was initially passed by the lower house of parliament Sayed Alwadaei, the director of advocacy at the Bahrain Institute for Rights and Democracy (based in London) accused Bahrain’s king of ‘effectively creating a police state’and of implementing ‘de facto martial law’. Bahrain is following in the footsteps of Saudi Arabia which has also redefined its anti-terror laws to increase the power of security forces in the face of political dissent. The government is using counter-terrorism measures to clamp down on political opposition, and cases of opposition leaders will be passed on to military courts to adjudicate as per the instruction of the Minister of Justice, Islamic Affairs and Endowments, Shaikh Khalid bin Ali Al Khalifa, who stated that judges of military courts should adjudicate cases concerning terror activities.

Anti-regime and pro-democracy protests have been occurring frequently in Bahrain since the 2011 uprisings. These have been led by members of the Shi'a majority against the ruling al-Khalifa monarchy, which is Sunni. High unemployment, systematic discrimination against Shi'as, a deteriorating human rights record and the increasing executive power of the Emir are grievances repeated by the opposition. Apart from Bahrain’s Bloody Thursday on 17 February 2011, where police raided sleeping protestors camping at Pearl Roundabout in Manama killing four and injuring about 300; protests have been largely peaceful but generally accompanied by a police response using excessive force.

On 14 March 2011 troops from both the United Arab Emirates and Saudi Arabia entered Bahrain at the request of the al-Khalifa regime, and crushed the rebellion. Three months of martial law followed, and hundreds of civilians were tried in military courts; tortured prisoners were given lengthy jail terms on little to no evidence. Peaceful protestors and even medics who had treated injured protesters were jailed. Both an independent inquiry commissioned by Bahrain’s rulers and international human rights’ organisations condemned the military courts. After martial law was lifted on 1 June 2011, the main opposition party, Al-Wefaq, led weekly demonstrations until protests were banned in October 2012. Despite the ban, protests have continued. The reintroduction of military courts to try civilians now is a disturbing development in the erosion of rights within Bahrain.

Government repression has included the stripping of citizenship from top cleric Shaykh Isa Qassim in June 2016, the banning of Al-Wefaq in July, and the execution of three men in January 2017. In contrast to the religious-based Al-Wefaq, Wa'ad (the National Democratic Action Society) – which has just been banned – is a leftist political party whose stated mission is to: ‘To strive towards achieving equal citizenship, safeguarding people’s sovereignty, protecting their rights and public freedoms, achieving equality and social justice for all and rejecting all forms of discrimination and sectarianism.’ As a secular bloc it has attempted to reach out to both Shi'a and Sunni opposition figures.

Wa'ad was previously banned in April 2011, but reinstated two months later. Its former secretary-general, Ibrahim Sharif, served four years in jail for his role in the 2011 protests, after being convicted by a military-led tribunal for plotting to overthrow the government. He was arrested again in July 2015 for a speech allegedly inciting hatred and spent a year in prison, and was again arrested and charged in November 2016 for ‘inciting hatred against the regime’ after an interview he gave to the Associated Press where he argued that a forthcoming visit by Britain’s Prince Charles would ‘whitewash’ human rights abuses. Wa'ad has been an unusual target for the government since the uprisings due to its moderate stance; this suggests that the government is unwilling to tolerate even mild dissent.

The international response to Bahrain’s increasing repression has been contradictory, with calls for condemnation ignored by both the USA and the UK. Various human rights NGOs, Amnesty International in particular, have been vocal in their concern for the deterioration of human rights. Amnesty claims that Bahrain is at ‘a tipping point’, and that the first weeks of 2017 saw ‘an alarming upsurge in arbitrary and abusive force by security forces’. The USA has announced its intention to approve an arms deal with Bahrain that was halted under the Obama administration. This would see the transfer of nineteen F-16 fighter jets to Bahrain. In December 2016 British Prime Minister Theresa May visited Bahrain and addressed the Gulf Co-operation Council, emphasising the fostering of stronger economic ties with Gulf countries on the eve of Brexit. There was no mention of human rights abuses.

Last modified on Saturday, 18 March 2017 15:37
Tweet
More in this category: Bahrain’s call to normalise ties with Israel »
back to top