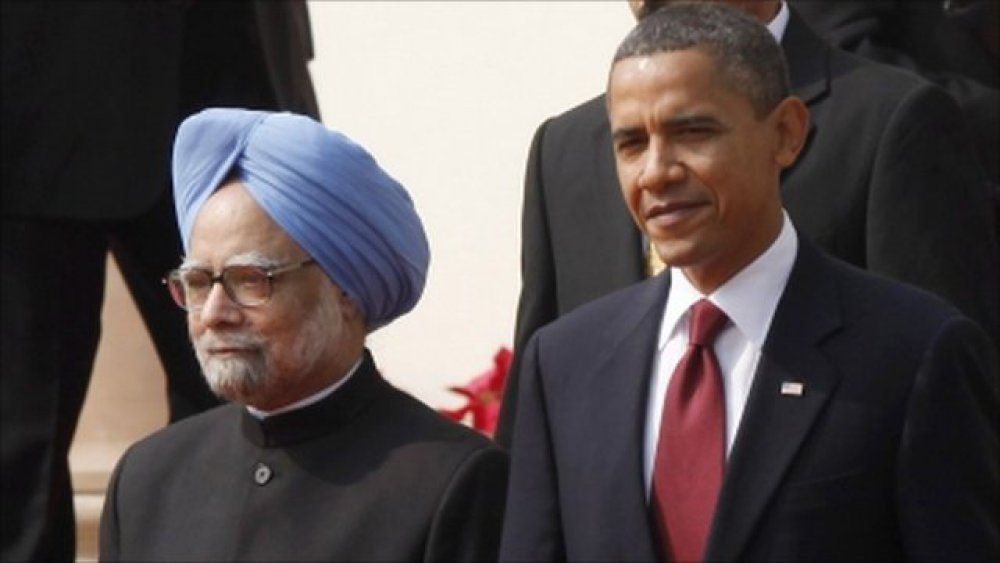 Published in South Asia
Tagged under

Obama's recent jive with school children in Delhi symbolises the nature of the new relationship that is emerging between India and the United States of America: the US, it seems, dances to the tune of India. While it is true that Obama did not pointedly accuse Pakistan of sponsoring terrorism as was India's desire, some trends within this emerging US-India relationship have become more evident through his refraining from referring to Kashmir in any of his several speeches over three days. Such avoidance reflects a dangerous and unjust trend in US policy for the region in general, and, more particularly, for India and Pakistan. Deliberately not discussing the main cause of bitterness between Pakistan and India shows not only poor understanding of the nature of the conflict but also does not augur well for a harmonious and peaceful coexistence for the countries of the region; the fallout of the India-Pakistani conflict is noticeable in other countries of the region as well. Such ignoring of the Kashmir issue comes at a time when that territory is gripped by conflict like never before, and Kashmiri politics is being determined by an unprecedented political movement led by a young generation of Kashmiris. The US refusal to discuss Kashmir, then, is nothing but a callous disregard of the much trumpeted democratic values which the west vociferously espouses.

At the heart of the Kashmir movement lies the right to choose. Such a value stands at the pinnacle of the democratic structure. If the basic right of choice is denied to people, what will the future of democracies be? In this case, Kashmir reflects the true personality of what India claims to be - a class-based society that defines the very social and cultural values of this liberal democratic country.

The agony of Kashmir dates back to 1947, when Indian troops invaded Kashmir after the Kashmiris refused to accede to India's demand for Kashmir to become a part of India. In response, Pakistan assisted the Kashmiri resistance militarily. After a brief conflict, the then-prime minister of India, Jawaharlal Nehru, rushed to the United Nations to call for a cease fire. India also made a commitment to the world community, as it has done on several occasions since, that a plebiscite would be held in Kashmir to determine the will of the Kashmiri people as to whether they wanted to join India or Pakistan. However, in 1952 and in anticipation of the promised plebiscite, Nehru reneged on all his promises and, instead, merged Indian-occupied Kashmir into India. This action abrogated Article 370 of the Indian constitution which gave special status to Kashmir. Pakistan, on the other hand, had signed 'standstill agreement' with the Maharaja of Kashmir in 1947. In terms of that agreement, Pakistan would recognise the status quo in Kashmir, that the territory had neither acceded to India nor Pakistan, and would allow Kashmiris themselves to decide on their future. The agreement, which India did not sign, remains in place, and Pakistan still stands by it. Kashmiris, in the meanwhile, have waited without success for India to make good on its promises. During this period a number of skirmishes (some of which transformed into full-scale wars) were fought between India and Pakistan over the Kashmir issue.

It was only after the Soviet withdrawal from Afghanistan, where many Kashmiri youth had received training from the Afghan mujahideen, that the Kashmiris took to arms and waged a freedom struggle known as Jihad-e-Kashmir. Kashmiris argued that India had been given sufficient time to democratically address their national aspirations, and had failed to measure up. Many independent thinkers and political scientists agree that India was the original transgressor in Kashmir, and, thus, the Kashmiri armed struggle is justifiable according to the UN Charter.

A more serious problem arose when India accused Pakistan of allowing the infiltration of Pakistani fighters from Pakistan-occupied Kashmir to Indian-occupied Kashmir. At the time, the international community was not willing to reject the Indian accusation. However, there no longer exists any excuse to ignore the Kashmir movement for freedom. The latest Kashmiri freedom movement is entirely peaceful, based on the popular will, and is largely led by the youth of Kashmir. Dispassionate and independent Indian analysts, such as Arundhati Roy, believe that it is a historical fact that Kashmir is not a part of India. Roy has urged Kashmiri youth to 'set goals for azadi (independence) and achieve them systematically'. The nature of the on-going movement in Kashmir is very different from any demonstration seen before. This is reflected in a number of factors.

The ultimate solution lies in respecting the will of the people and in creating an environment where this will can be ascertained in an atmosphere that is free of both Indian and Pakistani military presence. The need for this is manifest in the repeated claims by various Indian politicians that the territories of Azad Kashmir belong to them and that they have a right to capture them at any time. The Kashmiris will likely choose to merge with Pakistan. However, the UN resolution on Kashmir (UN Security Council Resolution 47 of 1948) may have to be modified suitably to allow for another option for the people of Kashmir: a state that is independent of both India and Pakistan. However, this can have many negative connotations for the region because of the growing animosity and tension between China and India, and, more especially, since this strategically vital territory could become a point of dispute between the various nuclear powers in the region - Russia, China, India, Pakistan and possibly Iran in the future.

Kashmir could also easily become a pawn in the rivalry between India and China. China already occupies more than 14 000 square kilometres of Kashmiri territory, and the strategic Chinese road between Tibet and Xinjiang passes through a plateau known as Aksai Chin which is vital to China's defence and security.

Furthermore, the aspirations of the Kashmiri people and their right to struggle are being stifled not only by Indian intransigence but, even more so, by the imperial western powers led by the US which wants to build India as a bulwark against China's emerging power. Morality and democracy have no place in the scheme of things as the US has, on many occasions, chosen not to comment on large-scale human rights transgressions being committed by the Indian Armed Forces in Kashmir. The people of Kashmir are increasingly suffering under Indian occupation. Never before has there been a more dense presence of the army against the civilian population as it is in Kashmir today, where the ratio of soldiers to civilians is one to eight. The Indian Armed Forces have stopped at nothing to oppress the people of Kashmir - including rape, arson, torture, nightly raids on homes and the indiscriminate killing of youth in an environment where there is not a shred of evidence that the Kashmiri youth resistance is engaged in armed confrontation. The suffering continues because the US and its western allies desire to contain China instead of engaging it for global peace and cooperation. If the US policy continues on its current course, the future and stability of the region will be bleaker than ever. If the current trajectory continues, a possible future scenario could be a nuclear war between India and Pakistan. Such a situation would be devastating not only for the region but for the entire world.

The critical factor that must be understood by American and NATO policy makers is that the evolving picture in Afghanistan is loaded with historical possibilities. Many are likely to be entirely different from their imaginary roadmap for the region. The imminent withdrawal of NATO forces from Afghanistan will help determine the fate of Kashmir. Kashmir holds the match to ignite a colossal inferno in South Asia which could consume the region - from Mindanao to the Straits of Malacca. In order to prevent such a devastating scenario from occurring, it would be wise for all concerned parties to wake up to the realities of a future which is unfolding at a rather rapid pace.

* Mohammad Abdullah Gul is a researcher whose work focuses on the Indo-Pak subcontinent.

Last modified on Thursday, 19 February 2015 13:50
Tweet
More in this category: Pakistan-USA relations in the post-Usama era »
back to top