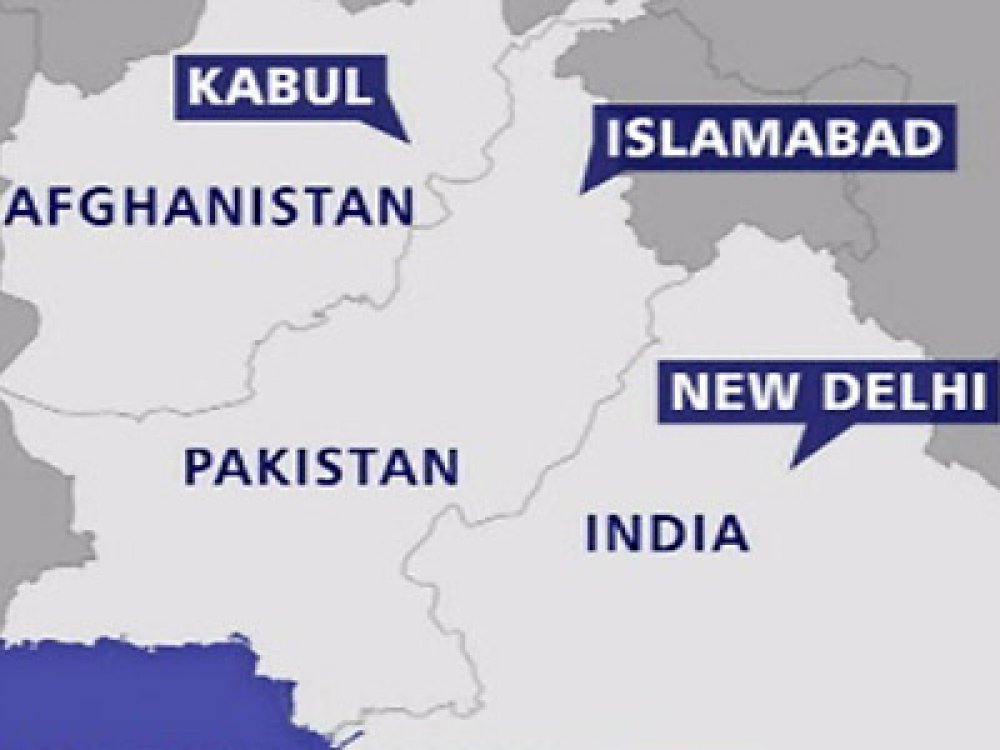 The savage attack on Kabul hotels housing Indian workers on 26th February 2010 - the fourth major attack on Indian interests in Afghanistan since July 2008 - is part of the proxy war between India and Pakistan fought on Afghan soil. Both South Asian nations see Afghanistan as a critical element of their strategic sphere of influence.

A day before the hotel attacks, though neither side admitted it officially, Afghanistan had brought the foreign secretaries of India and Pakistan together in Delhi. The 25th February meeting was the first between India and Pakistan since the Mumbai terrorist attack of November 2008.

Though officially declaring that it was a bilateral issue, Washington has been exerting immense pressure on Islamabad and New Delhi to resume talks because any conflict between the two nations directly impacts on America's campaign in what is now called the Af-Pak region. The U.S. does not want anything to distract Pakistan from its war against the Taliban, which is mostly ensconced in the frontier provinces bordering Afghanistan. U.S. military and intelligence officials insist that Pakistan's tribal areas along the Afghan border are used by the Taliban and al-Qaeda to stage attacks in Afghanistan, and believe that Pakistan's cooperation in checking this is critical to winning its war in Afghanistan.

Afghanistan's importance stems from its location. Whoever governs Afghanistan controls the land routes between Iran in the west, the resource-rich Central Asian states (Turkmenistan, Uzbekistan, and Tajikistan) in the north, and South Asia in the east. Afghanistan's geographic location has ensured that its nation has had a long and tumultuous history of various nations trying, mostly in vain, to control it. Apart from Britain and Russia playing what is now described as the 'Great Game' in Afghanistan from the late 19th to the early 20th centuries, it has also experienced a decade of Soviet rule, and six years of ultra-orthodox Taliban rule.

Afghanistan was (undivided) British India's western neighbour before independence and the Partition of 1947, which led to the birth of Pakistan. The Pashtun population of the North West Frontier Province, now living in the area described as the Af-Pak region, had participated extensively in India's freedom movement.

Though separated geographically by Pakistan - which has consistently denied transit rights for Indian goods headed for Afghanistan and vice-versa - the New Delhi-Kabul relationship has been generally robust, bar the period when the Pakistan-backed Taliban ruled in Kabul from 1996 to 2001. (Saudi Arabia, the United Arab Emirates and Pakistan were the only three nations which recognized the Taliban regime.)

Before that, India enjoyed excellent social, cultural and economic relations with the various governments in Kabul, including the Soviet-backed regimes. Afghan shawls, carpets and dried fruit were easily available across India, while Indian movies and movie stars were, and still are, part and parcel of Afghan culture. After the Soviet withdrawal in 1989, New Delhi endorsed the regime of Mohammad Najibullah, seen by many as a Soviet puppet.

But this was followed by the onset of civil war and the takeover by the Taliban, a fundamentalist Sunni outfit led by the mysterious Taliban Emir, Mullah Omar. India then overtly and covertly backed the Northern Alliance led by Ahmed Shah Masoud, which doggedly held on to a tiny sliver of north-eastern Afghanistan. Apart from nearly USD 70 million in aid, India provided two heavy lift helicopters, medical and other aid to the alliance.

Masoud was killed on the 9thSeptember 2001 by suspected Al-Qaeda activists posing as journalists. Two days later, on the 11thSeptember, terror hit the United States. Evidence led back to Osama bin Laden, reportedly living in Afghanistan under the patronage of Mullah Omar. When the Taliban refused - in terms of U.S. accounts - to hand bin Laden over to the U.S., the U.S. and its allies launched a military invasion into Afghanistan called Operation Enduring Freedom. While the immense fire-power of this alliance forced the Taliban out of Kabul, bin Laden and Omar are still at large. A loya jirga, or gathering of tribal leaders, was quickly convened under UN auspices to choose a new leader.

The installation of Hamid Karzai - who had studied in India - as the interim and then the official president of Afghanistan opened up the nation once again to India. Several other leaders of his administration are ardently pro-India, and accuse Pakistan of harbouring and funding remnants of the Taliban leadership. Pakistan, which was forced formally to disown the Taliban following intense U.S. pressure, watched helplessly as New Delhi promptly started pumping in huge amounts of aid to Afghanistan in an effort to rebuild the war-ravaged nation.

Apart from presenting aircraft to Afghanistan to revive Ariana Airlines, India has been active in building roads, schools, hospitals, power and communication networks. It also trains Afghan diplomats, military officers, policemen, bureaucrats, and businessmen. India's pledge of USD 1.2 billion for Afghanistan's reconstruction makes it the largest regional donor to the country. Pakistan does not figure in the top 10 list of donors.

The pro-New Delhi government in Kabul and the renewal of ties with arch-rival India has raised red flags for Islamabad, which traditionally perceives Afghanistan as its own backyard. India accuses Pakistani intelligence of using Islamist extremists to foment unrest in the disputed territory of Kashmir, while simultaneously promoting the Taliban to stall Indian influence in Afghanistan.

Pakistan is particularly perturbed by the setting up of four Indian consulates, in Herat, Jalalabad, Kandahar, and Mazar-e-Sharif - apart from New Delhi's embassy in Kabul. Islamabad believes that Indian diplomatic missions are used to foment trouble in the border areas of Balochistan, the Federally Administered Tribal Areas (FATA) and the North West Frontier Province (NWFP). Some officials have even accused India of printing and circulating fake Pakistani currency and recruiting Afghans to carry out covert acts in Pakistan. India, however, denies these charges. Asserting that it is up to the government in Kabul to decide how many Indian or other missions could be set up in Afghanistan, New Delhi says these missions help facilitate its aid and reconstruction operations in Afghanistan. In turn, India blames Pakistan for repeated attacks on these consulates and its embassy in Kabul.

Apart from intermittent grenade attacks on the four Indian consulates and Indian aid workers, 58 people - including four Indians - were killed and at least 141 injured in a suicide bomb attack on the Indian embassy in Kabul on 7th July 2008. In October 2009, 17 people died and 63 were injured when another suicide bomber blew himself up just outside the embassy wall. Two months later, on 15th December, yet another suicide bomber attacked the Heetal hotel in the Wazir Akbar Khan district, near a guest house which housed 40 Indian information technology workers. Eight people - including five Indians - were killed, while two information technology workers, a cleaner, a cook and a guard were injured.

Pakistan is also concerned about the 218 km Zaranj-Delaram road built by the Indian Border Roads Organisation. Completed in January 2009 despite several rocket attacks aimed at stalling the project, this road links to the Iranian port of Chabahar, and thus reduces landlocked Afghanistan's almost total dependence on the Pakistani ports of Gwadar - built by the Chinese, who are also vying for strategic space in the region - and Karachi.

There are about 4000 Indian workers and security personnel working on different relief and reconstruction projects in Afghanistan. Following the spate of attacks on Indian interests since 2006, India has also deployed 500 members of its Indo-Tibetan Border Police to protect its interests in Afghanistan. After the latest attack on hotels housing Indian workers in Kabul, this presence is likely to be increased.

"Why do the Pakistanis interfere in Afghanistan? Because they require an Afghan puppet state to supply them with strategic depth for their conflict against India. Therefore, keeping Pakistan from making Afghanistan a base of extremism in the future will require constant U.S. involvement in managing the India-Pakistan rivalry," writes American journalist Robert D. Kaplan,in an e-mail debate on America's war on terror in SlateMagazine, January 2002.

"As I said, chaos was less the problem in Afghanistan than radicalizing. Pakistani interference there was necessitated by the threat Pakistan perceives from India... As for the Indian-Pakistani rivalry, we need to keep the following in mind: India, despite its official pronouncements, may actually want a radical regime in Pakistan that would be an international pariah as well as weak internally. What India has more trouble dealing with is, in fact, a strong government in Pakistan that cracks down on extremists and thus wins more friends and support abroad," he argues.

Referring to her recent meeting with Pakistan Foreign Secretary Salman Bashir as an effort on India's part to build trust with Pakistan, Rao said: "Despite the brazen and malignant nature of the threats we face, India has made several genuine efforts to restore trust and confidence. We have, time and again, made genuine attempts to address outstanding issues, most importantly, the issue of terrorism through dialogue with Pakistan. But it continues to be our conviction that for this dialogue to really make progress, Pakistan should take meaningful steps to address our concerns on terrorism, and cease the encouragement of terrorism targeted against India."

Noting that New Delhi resumed its Composite Dialogue with Islamabad after the then Pakistani leadership made such an assurance in January 2004, she said: "Today, Pakistan claims that it is in no position to give us such a guarantee that terrorism can be controlled by its authorities. In such a situation, the people of India who are already bitterly affected by the series of terrorist attacks directed against them, can hardly be expected to support the resumption of a full-blown Composite Dialogue with Pakistan."

Referring to U.S. military aid to Pakistan, she said, "It is also important that there are strict accountability criteria that apply to defence assistance rendered to Pakistan for operations against terrorists and insurgents on the border with Afghanistan. India's past experience regarding such assistance has taught it to be vigilant to the possibility of it being used for purposes that generate tension and hostile actions against India."

India "does not have aggressive designs against Pakistan and we want it to be a stable and prosperous country," she said. "But we will be vigilant about our security. That is our sovereign right."

* Ramananda Sengupta is the Chief Editor of Sify.com, one of India's oldest and largest Internet news and entertainment portals

** This article is published in terms of a partnership agreement between the Afro-Middle East Centre (AMEC) and the Doha-based Al-Jazeera Centre for Studies.

Last modified on Thursday, 19 February 2015 14:01
Tweet
More in this category: India walks a tightrope in its relations with Israel, Arab nations »
back to top