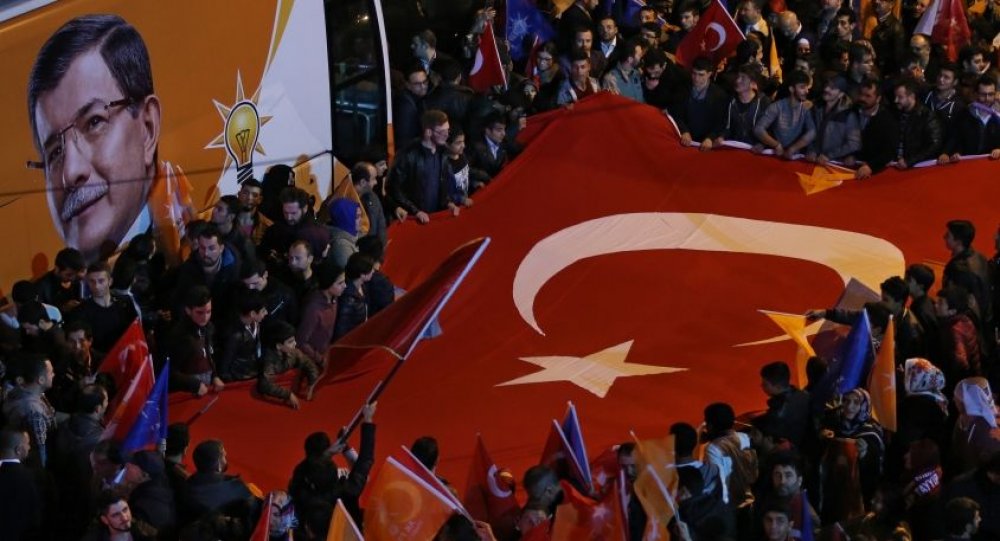 The outcome of Turkey’s 1 November snap election was an unexpected surge in support for the ruling Justice and Development Party (AKP) which will comfortably dominate parliament with 49 per cent of the vote (up from 41 per cent in the June election) and 57 per cent of parliamentary seats. This is in stark contrast to the results of the June election that had produced a hung parliament and led to five months of political and economic instability. This latest outcome sets a different scene for the country’s future social, political and economic agendas as the AKP takes 317 of the 550 parliamentary seats.

With large numbers of refugees arriving in Turkey daily, the Syrian crisis certainly influenced the the socio-economic environment and the election, but there is little doubt that the resumption of violence between the state and the Kurdish Worker’s Party (PKK) was extremely crucial in how votes would be cast. While opposition media, particularly those aligned to the Gulen/Hizmet movement, portray the outcome as a personal victory for the president, Recep Tayyip Erdogan, the results highlight the collective weakness of the three main opposition parties, underlined by the spectacular losses suffered by the Nationalist Movement Party (MHP) – which shed 40 parliamentary seats – and the pro-Kurdish People’s Democratic Party (HDP) – with a decrease of 21 seats. Both parties could have been king-makers in a coalition government after June but, like the AKP, they gambled on securing more seats in the second election. The main opposition Republican People’s Party (CHP) maintained its position, losing only two seats.

The AKP’s revival as majority party with four million votes more votes than in June can be attributed mainly to a popular desire for ‘stability’ which, many voters believed, can be delivered only by the ruling party. Further, the Kurdish issue and related violence loomed large, and coalition governments in Turkey have historically failed to help in resolving the Kurdish question. Turks became instinctively distrustful of coalition governments after the turbulent 1990s when frequent military interventions into politics became the norm. This week’s outcome can, thus, also be read as an attempt by voters to prevent a situation where Turkey can only be governed by a coalition. Five months ago analysts and exit polls predicted the AKP’s decline as a result of internal and external pressures, particularly because of contestation between the party and its former ally, the Fethullah Gulen movement. The Gulenists’ withdrawing support from the AKP in June strongly influenced the party’s poor showing.

In five months the HDP, which celebrated in June for the 13 per cent of the vote it had received, lost three per cent, while its leadership aimed for 20 per cent. To voters for whom stability was a priority – especially conservative Kurdish voters, the HDP’s unwillingness to distance itself from and condemn the PKK was a major factor for its losses. Votes that the HDP received in June from those who viewed a strong HDP as a check on the AKP’s exercise of power, especially in light of corruption allegations against AKP officials, now switched to the AKP. Some observers suggest that the shock decline in AKP votes in June was a result of punitive voting because of a stagnant economy and rising instability brought on by the Syrian crisis. And nationalists wanted to punish the AKP for its seemingly-dovish approach to the PKK. Images of armed PKK members at check points in Kurdish areas such as Cizre stirred anti-AKP sentiment even within its traditional support base.

But the return of violence on a daily basis – with bombings in Turkey’s major cities, and the Turkish army at war with both the PKK and Islamic State group and with deaths on both sides of the state-Kurdish conflict – turned a large number of voters away from the HDP back to the AKP. Most HDP votes this week came from Turkey’s east, suggesting that Kurds in other areas switched their votes back to the AKP. The ruling party seems to be considered by many as a safe bet during tumultuous times. Some critics argue that the AKP manufactured ‘instability’ in the past five months in order to return precisely the result that this election did, that while the government has not been responsible for all the violence, it created the conditions for it and helped paint the PKK (and politicised Kurds more generally) as Turkey’s enemy – in order to win back the parliament.

If this criticism is correct, it is possible the AKP might consider reviving talks with the PKK now that it is again politically secure. Abdullah Ocalan, the PKK’s imprisoned leader, will likely face increased pressure from Turkey’s National Intelligence Organization (MIT), which will want him to support a political solution to the conflict. If he is unwilling or unable to do so, the assumption would be that the PKK strategic leadership centre had shifted to the commanders in the Qandil Mountains, and that Ocalan had become irrelevant.

HDP leaders will face similar pressures. To continue to be recognised as the political voice of Turkish Kurds (at least by the state), they will be expected to distance themselves from the PKK. It will also have to consider how it might strengthen its appeal both to Kurds and to Turkish leftists who supported it in June, but might have deserted it in November. As with all parties, the HDP’s survival partly depends on the Turkish economy. This will be a critical factor for the HDP which won most seats through votes obtained in the east where the economy has been particularly hard hit as a result of the government-PKK battles. To complicate matters further for the HDP, it will have to navigate its ‘debt’ to the Gulen movement whose members voted for the HDP as a way of blocking the AKP and opposing Erdogan.

But with the Kurdish question again becoming the most pressing domestic issue – especially with the renewed war between the state and the PKK, the government will want a strong Kurdish political partner that can be an interlocutor with the PKK and encourage it back to the negotiations table. The AKP will likely see the HDP as such a partner and will want to change that adversarial relationship into one of cooperation.

Paradoxically, the AKP also retained votes from supporters who had been critical of the party’s negotiations with the PKK, but who did not shift their votes to the hardline Turkish nationalist MHP; and it won the votes of MHP nationalists who were encouraged by the government’s recent (deadly) confrontations with the PKK. The MHP’s identity-based policies are viewed by many as incapable of dealing with the new reality, including that of Kurdish parliamentarians, and is losing even leaders because of this. The AKP, then, succeeded in winning the votes of both conservative Kurds (from the HDP), and nationalist Turks (from the MHP) – even though that seems counter-intuitive.

Another factor contributing to the AKP’s success was the revision of its candidate lists since the June election. Many well-known leaders who had reached their three-term limit were unable to stand in June, but, having ‘missed’ an election, became eligible again. In a period of uncertainty the electorate seems to have taken comfort in personalities from the past who are tried and trusted.

While in most elections a weak economy results in the incumbent ruling party losing support, in Turkey it has meant that voters supported the incumbent because they believed it could rescue the economy – as it did over a decade ago.

While the Syrian war is ever-present for all Turks – especially since Turkey hosts two million Syrian refugees who have been partly blamed for the country’s economic woes – it and other foreign policy issues were less important in this election than the PKK issue.

With the question of parliament’s make-up settled for another term, there have been two broad perspectives on a future under the AKP. The optimistic view is that the government, with a secure majority, will be able to deal with the economic, foreign policy and Kurdish issues. The other is that the vote was unfair because of repression, and that the AKP will become more authoritarian, further restrict free expression and increase polarisation.

Ahmet Davutoglu, Turkey’s prime minister and AKP’s chief, acknowledged in his victory speech that polarisation was a problem, and he pledged to form a government that will embrace all Turks. Will he seriously address the problem? Will he reflect that pledge in a new cabinet that includes members of other parties? For many critics of the AKP, the big concern is what they see as Erdogan’s authoritarian tendency and his desire to change Turkey’s political system into a presidential one. Whether this desire or Davutoglu’s pledge will trump will have long-term implications for Turkey.

Tweet
More in this category: Turkey’s Kurdish question: Historic foundations and contemporary issues »
back to top