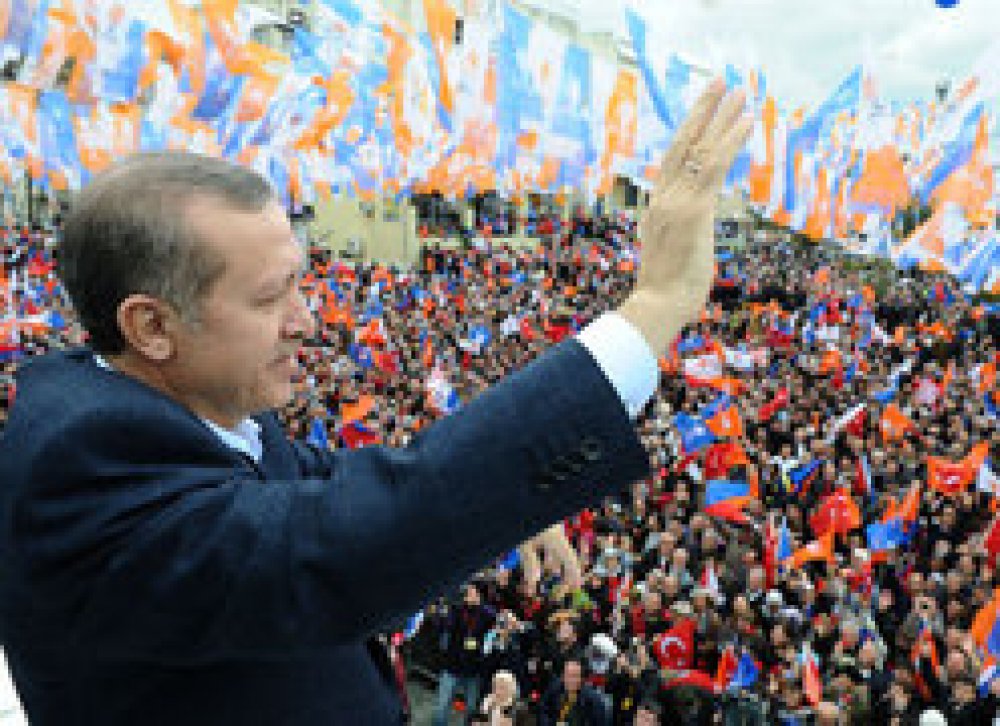 The election result was a major victory for Erdogan and his party, but, for reasons that are easy to understand and had been predicted, the outcome cannot be viewed as an outright and conclusive AKP victory.

This was the third time that the AKP entered the Turkish electoral race since it was founded in 2001. The AKP participated in its first election a year after its founding, and then again in 2007. This 2011 election is the first to take place since the constitutional amendment that limited parliamentary terms to four years. About twenty parties participated in the election, with the most notable being the AKP, which has been in power since 2002; the Republican People's Party (CHP), which is the main opposition party; the Nationalist Movement Party (MHP) which is also an opposition radical nationalist party; and the Kurdish Peace and Democracy Party (BDP), whose candidates ran as independents but are expected to announce themselves as a parliamentary bloc once parliament convenes. However, reports suggest that thirty of the thirty-six elected members who would make up the BDP's parliamentary representation are threatening to boycott parliament if six jailed deputies representing the same bloc are not freed. As had been expected, none of the smaller parties obtained the ten percent minimum requirement for parliamentary representation.

A notable aspect of this election was that, since electioneering began, the AKP targeted the MHP with the aim of preventing the latter from reaching the ten percent threshold, and thereby ensuring over 367 seats for the ruling party. In Turkish politics, 367 is the magic number, as it is the number of seats required for a two-thirds majority. Such a majority would have enabled the AKP to adopt a draft constitution without having to resort to a popular referendum.

In terms of the overall atmosphere and the electoral procedures followed, these elections were the freest and most democratic that Turkey has witnessed since the transition to democracy over sixty years ago. Citizens were able to register to vote with nothing more than their official identity cards, enabling about fifty million Turkish citizens to cast their ballots. More than 7 600 candidates competed for the 550 parliamentary seats in the Grand National Assembly.

Unlike during previous parliamentary elections which the AKP participated in, there was a marked absence of debate on the issue of 'secularism' or, as it was then raised, 'fear for the future of the republic and its values'. It has become clear to opposition parties that they cannot defeat the AKP with such rhetorical positions. Instead, the political debate raged around economic and developmental issues, unemployment, equitable distribution of wealth, and – above all – the expected new constitution. The three leaders of the main parties: Erdogan (AKP), Kemal Kilicdaroglu (CHP), and Devlet Bahceli (MHP), also played significant electioneering roles. While the AKP made a tremendous push to achieve gains in the western coastal regions of Anatolia, an area that has always been considered a CHP stronghold, it is believed that traditional CHP voters voted tactically by casting their vote for the MHP in an effort to boost the latter's chances of returning to parliament, and thereby denying the AKP its desired two-thirds majority.

While the election did not fundamentally alter the relative standing of the Turkish parties, it is important to examine what has changed since the 2007 election.

Compared to 2007, the ruling AKP's share of the popular vote increased by four points, reaching fifty percent of the popular vote. This means that the party has not only won three consecutive elections, but has also succeeded in steadily increasing its voter base. Such a result is unprecedented; even Adnan Menderes – who won three successive elections in the 1950s – did not achieve anything similar. In terms of the total number of the AKP's parliamentary seats, these fell from 336 (in 2007) to 326. The drop was a result of the electoral commission's changes to the electoral district boundaries, changes that were carried out with the support of the AKP government. Despite the new boundaries being considered more representative of the country's changing demographic distribution, the redrawing of boundaries harmed the party's prospects. Independent candidates, mostly supporters of the banned Kurdish Workers' Party (PKK), achieved much better results than they did in the 2007 elections, gaining ten seats to make a total of thirty-six. The AKP also made major inroads by penetrating traditional strongholds of the CHP in the coastal cities, winning in Antalya, and taking second place in Izmir.

The CHP also increased its share of the popular vote by four points: from twenty-two to twenty-six percent. This is a modest increase considering that the party's new leadership has almost entirely abandoned its traditional Kemalist discourse. The party also benefited from the change in the electoral district boundaries, raising the number of its parliamentary seats from 112 to 135. The CHP's inability to challenge its AKP rivals, and the unprecedented decline in its performance in coastal cities have led to calls for an emergency party congress to replace party leader Kemal Kilicdaroglu.

Since the last election, the MHP's support has declined by only one percent of the popular vote (from fourteen to thirteen percent). However, the MHP was the major loser in terms of parliamentary seats, dropping from seventy-one seats in 2007 to fifty-three seats. Despite the AKP's targeted campaign against the MHP, the MHP remains in parliament. The MHP has also managed to survive a series of scandals that affected a number of its candidates. Arguably, the party's maintaining its parliamentary presence is a success in itself and has been a factor in promoting some popular sympathy for the party, as well as bringing in some tactical votes from CHP supporters.

These results have enabled each of these three parties to claim victory: the AKP can celebrate passing the fifty percent mark, a major achievement in a political arena known for its fragmentation; the CHP can point to its modest increases in the percentage of the popular vote as well as parliamentary seats gained; and the MHP can claim success in withstanding the AKP's targeted campaign against it, and of remaining in parliament. The incontrovertible success, however, is that of the Kurdish bloc, whose independent candidates won a significant number of parliamentary seats, confirming that they are a force to be reckoned with in Turkish politics. This is also an indication that the 'Kurdish question' will continue to trouble the Turkish state for some time.

Implications of the elections

The first implication of these results is that the AKP's position in Turkish politics is still strong, and its rival parties remain too weak to pose a real challenge to its popularity, its control over parliament, and its ability to lead and govern the country. Instead of falling prey, as is often the case with democracies, to an accumulation of errors that comes with being in power for nearly a decade, the AKP has remained largely unscathed. Indeed, it seems that the party has steadily managed to attract and increase the support and confidence of the Turkish electorate.

The results, however, also contain another message for the AKP and its leader

Last modified on Thursday, 19 February 2015 09:08
Tweet
More in this category: Determinants of the Turkish Position on Intervention in Syria »
back to top