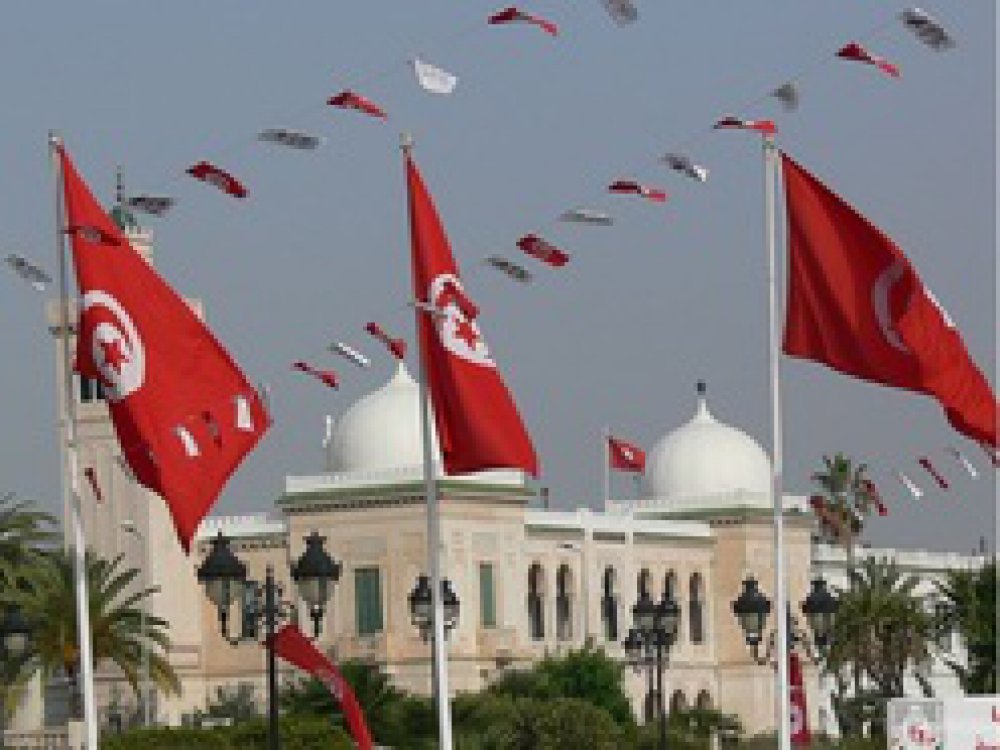 At first glance, these actions seem unrelated. They do, however, converge around their aim to disrupt the upcoming election for the Constituent Assembly, that is expected to result in a new constitution and shift the country towards the establishment of the 'Second Republic'. The 'Second Republic' will symbolise the final break with the old regime. The connection and interplay between these two most prominent elements of the current Tunisian crisis - the protesting security personnel and the Constituent Assembly elections - have not gone unnoticed by the prime minister. Indeed, Sebsi began his most recent speech by discussing the referendum, and then launched into a scathing attack on the police unions, referring to the protesting security personnel as 'monkeys'.

Despite Sebsi's attempt to plead neutrality through his claim that the referendum was not a matter of governmental concern, close attention to his speech suggests otherwise. This can be read in his response to the security personnel's protests, demands and threats to strike, where he called on ministers and governors to dissolve the unions involved in the protests and to enact a state of emergency.

Of particular significance is the popular reaction to Sebsi's speech and the actions of the police unions. The speech was reminiscent of that of former President Habib Bourguiba in December 1962, after an attempted plot to overthrow the government was uncovered. Both speeches suggested that these types of actions threatened the state itself and not just the government. Further, both speeches hinted that any competent government should respond decisively to such actions. Significantly, the broader Tunisian public was not critical of the speech, suggesting that, despite its divisions, Tunisian public opinion generally opposed the protest actions of the security personnel. This position, however, needs to be read in light of the tumult of preparations for impending elections, and the fact that the speech was delivered just one day before the deadline for the nomination of candidates for the Constituent Assembly, and a week before students were to return to school.

There has been a pervasive state of anxiety within the Tunisian public that the protests might affect both the return to school and the scheduled election date. People have been particularly concerned that the protest actions could disrupt the normal course of life at a time when the executive branch of government was to have assuaged the political uncertainty and security turmoil that had been wrought by the uprising earlier this year.

There is, as yet, no material evidence to suggest that the police unions were involved in deliberate attempts to hamper the elections. It is, however, interesting that some political currents have exploited the turmoil facing the government. They have argued that a fragile security situation and an incompetent government might necessitate the army's assumption of power through a military council.

There are suspicions that this would be a position favoured by those who are opposed to the the idea of the Islamist Al-Nahda Movement sweeping to victory in the Constituent Assembly elections. The concern is substantiated by references to statements made some months ago by the isolated former interior minister, Farhat Rajhi. Rajhi had suggested that certain groups among the upper echelons of Tunisian society, particularly the former political elite, would prefer to resolve the situation the Algerian way, hinting that if Islamists were to take power through the ballot box, the former political elite would create chaos that would either prevent the elections from taking place under conditions of stability, or would even cancel the elections altogether, resulting in a de facto coup d'etat.

However, in order fully to grasp the complexity of the situation, it is imperative to understand the integral and critical role played by the police unions in ensuring that the former regime was able to rule Tunisia for a quarter of a century. Firstly, many police unions were formed in an ad hoc fashion from the beginning of Farhat Rajhi's reign at the head of the interior ministry. Furthermore, the unions have often exhibited contradictory tendencies and loyalties. Some people view the union that organised the recent protest with a great deal of apprehension and suspicion, and are concerned that the timing for the raising of their demands - particularly considering that the upcoming elections will potentially herald a crucial turning point for the country - may serve the agenda of the opponents of a new government.

Indeed, senior officials who are currently overseeing the security of the country faithfully served the old regime, many as the first and second tiers of leaders and officers of the security system under deposed President Zine El Abidine Ben Ali. With key figures from the old regime still playing a prominent role, immense doubt is cast about the possibility of establishing a new democratic political system. However, some unions, such as the internal security forces union (now the strongest among the security unions) have included in their demands that members of the old guard must be purged from the security apparatuses in order to ensure the progress of a reform agenda. Observers, however, have noted that these unions have recently tended to overlook this demand in favour of ensuring calm.

There are serious concerns amongst members of the officer class who, under the former regime, were not only involved in the repression of Tunisians but who are known to have benefited from corruption (as recorded by Transparency International for many years), that revolutionary forces might take control of the Constituent Assembly, form a national government, and hold these officers to account for their past deeds. As such, the political demands coming from the security sector stem either from patriotic elements concerned about the corruption of the electoral process (and demanding a purge in the security sector) or from influential remnants of the Ben Ali era who are concerned about the consequences for them of a government elected by a Constituent Assembly. Regardless of the different intentions in the unions, the forces of the old regime could exploit their demands in order to disrupt the Constituent Assembly elections.

Similar fears cast their shadows on the political arena. This is patently clear in the growing call to both define and limit the powers of the Constituent Assembly. It should be recalled that this demand was first made a few months ago at a conference in June, when representatives of forty-seven parties that had splintered from the dissolved ruling party met to demand a referendum on the shape of the future political regime and the duration of the term of the Constituent Assembly. At the time, this call appeared absurd and doomed to failure. However, not long after, there emerged the 'Republican Covenant' which was produced by some leftists to ensure that a new constitution would be limited by this document. The failure of their attempt caused them later to float the idea that there should be a referendum on their document to limit the powers of both the Constituent Assembly and the future constitution.

It is important to note that those defending the idea of the referendum to limit the powers of the Constituent Assembly are of two streams:

Those calling for a referendum, however, face a number of legal challenges:

The alliances formed by those calling for a referendum with the forces of the old regime, particularly those in the media (two private television channels are championing the referendum), have resulted in their demand losing credibility.

The debate about the powers of the future Constituent Assembly has been based neither on constitutional nor legislative arguments; the heart of the debate has been over who will form the next government. With the deadline for nominations for the Constituent Assembly elections having already passed, it seems that the intention of the authors of the electoral law to spread the votes among a large number of candidates and parties has come to pass; some 12 000 candidates representing 1 700 lists in twenty-seven constituencies are contesting about 200 seats. However, this attempt at spreading the votes does not appear to have impacted negatively on the Islamists. Public opinion polls indicate that their support continues to hover at around one quarter of the electorate. This has raised the anger of those who penned the electoral law, because it appears that their political ambitions will most likely be impacted negatively by it.

This is especially the case with the apparent collapse of what was the strongest opponent of the Islamists - the Progressive Democratic Party (PDP), which suffered a major split in its ranks as a result of contestation around the process of drafting the party's electoral candidacy lists. Meanwhile, leftists and parties that splintered off from the old ruling party will also enter the elections in a state of division. This will certainly negatively affect their chances of winning seats in the Constituent Assembly, and will put them at a disadvantage when discussions on the distribution of ministerial portfolios will take place after the election.

The ferocity among those opposing the Constituent Assembly's assumption of full powers seems largely as a result of this predicted outcome. As a result, some strange political alliances have been formed within the ranks of those demanding a referendum (such as the alliance between the PDP and parties who had splintered off from the old ruling party). Time, however, is not on their side. In its meeting on Wednesday, 8 September, the 'Higher Committee for the Achievement of the Goals of the Revolution, Political Reform and Democratic Transition' decided that it would technically, materially and legally be impossible to hold a referendum. A similar judgement has been offered by various legal experts. Unsurprisingly, they are no longer invited to express their views on the referendum on privately-owned television channels.

The more significant fear gripping today's political actors is the possibility that those who advocate the curtailing of powers of the future Constituent Assembly are backed by the forces of the old regime and their security apparatuses, and by regional powers who are wary about an Islamist control of the Assembly. These regional powers are worried about the nature of the government that will emerge from the Assembly and concerned how this might affect their interests in Tunisia.

There are two potential scenarios for the unfolding of Tunisia's political theatre:

Both scenarios could easily give way to political instability that will feed into security chaos. If that were to happen, the door will be opened to a range of negative possibilities.

Last modified on Tuesday, 26 May 2015 16:16
Tweet
More in this category: Flowering of the Arab Spring: Understanding Tunisia’s elections results »
back to top