An indepth look into the Syrian conflict: Na'eem Jeenah

The United Nations has suspended all aid convoys in Syria after its lorries were attacked by warplanes near Aleppo on Monday.
The attack came a few hours after the Syrian army declared an end to a week -long ceasefire. The United States has expressed outrage at an attack on an aid convoy near the Syrian city of Aleppo.

South African aid organisations have been lauded for their humanitarian efforts in the Syrian conflict. The conflict began with the Arab spring in 2011 and now has degraded into a civil war whereby there are many armed factions fighting for control. To give us more insight and to explain South Africa's humanitarian role in Syria is Afro-Middle East Centre Executive Director Naeem Jeenah. 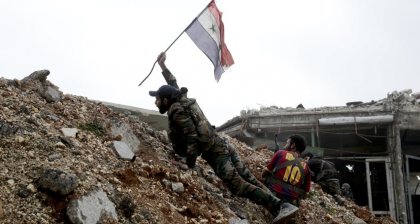 The east Aleppo deal and the survival of Asad

The 13 December surrender agreement between rebel groups and the regime of President Bashar al-Asad marked a turning point in the five-year long Syrian conflict. Opposition demands for Asad to step down through a transition process now seem impractical and unachievable, mainly because the government now controls most urban areas. Further, the agreement’s relative success will empower its chief negotiators, Turkey and Russia, to reshape the conflict to suit their converging interests, which increasingly sees a role for Asad. The regime will, however, find it difficult to establish its sovereignty over the entire country as Turkish troops and rebel groups backed by Turkey and certain Gulf states – including Saudi Arabia and Qatar – consolidate in more rural areas. Significantly, the regime is now more empowered to pursue its aims, even when these do not fully coincide with the interests of its Russian ally.

Announced late Tuesday, the agreement allowed for rebels and civilians trapped in besieged East Aleppo to evacuate to other rebel controlled areas as regime forces regain control of the remains of the city. This completes the main thrust of the regime’s latest strategy, which aimed at consolidating control of large population centres across the country’s east-west spine, confining the rebellion to rural provinces. The government now controls Damascus in the south, Aleppo in the north, and the central Homs and Hama provinces – the areas many refer to as ‘useful Syria’. This means that any transitional agreement that excludes Asad – as the opposition and Gulf states such as Saudi Arabia have been demanding – will not be possible, thus voiding a major demand of the rebellion.

Already, Qatar’s foreign minister, Mohammed bin Abdulrahman Al –Thani, referred to the Syrian opposition’s calls for negotiations without any preconditions regarding Asad’s role. Further, although rebel groups control parts of the Aleppo governorate, much of Idlib, as well as areas in the south, their armed capabilities have been severely weakened, due in part to fears about their links with Jabhat Fatah Al-Sham (formerly Jabhat Al-Nusra). This relationship has made some governments, especially the USA and Jordan (which train and coordinate activities with the Southern Front rebel group) wary. Funding, even from Saudi Arabia, has thus been reduced, and some states, especially USA and Jordan, prefer to conclude agreements with the Syrian regime around combatting the Islamic State group and preventing a spillover into Jordan and Lebanon.

Shifting geopolitical interests have also influenced the conflict. Following Turkey’s apology to Russia over its downing of a Russian fighter jet in November 2015, a rapid rapprochement has occurred between the two states, and a convergence on Syria is emerging. In September the two countries agreed on Turkish use of Syrian airspace, and in October Turkey aligned its stance on Jabhat Fatah Al-Sham closer to that of Moscow. It is probable that Turkey’s recent troop deployment into Syria was endorsed by Moscow. Russia and Syria have virtually ignored Turkey’s incursion into northern Syria and its efforts to form a buffer zone up to the IS-controlled town of Al-Bab – in return for it limiting its support for rebel groups in east Aleppo.

Ankara’s redeployment of thousands of rebel fighters from Aleppo and its August capture of Jarabulus, in the north of the Aleppo governorate, in was a key factor influencing the Syrian regime’s ability to reimpose its siege on Aleppo in September. In recent months Ankara has attempted to negotiate a rebel withdrawal from east Aleppo, initially only for Jabhat Fatah Al-Sham fighters, thus allowing some opposition governance in the city, and later, following regime objections, for civilians and fighters belonging to other groups. This deal was key to the rapid fall of east Aleppo, and to the fact that Turkish-backed forces rather than the Kurdish YPG will likely be prominent in attempts to drive IS from Al-Bab. Turkey and the other major regional power with troops in Syria, Iran, have also been discussing Syria in the past three months, and have agreed to protect the country’s territorial integrity.

Iran was not, however, directly involved in the surrender agreement negotiations, and has been accused by some as a spoiler, because of its demands that wounded civilians in the regime-supporting towns of Foua and Kefraya in Idlib governorate, which are besieged by rebels, also be evacuated, and by then supporting militia groups which have prevented many evacuation attempts from Aleppo. Iran has attempted a deal on these towns for the past eighteen months with Ahrar al-Sham. Its proposal was to engineer a population swap, with residents of these towns to be exchanged with Sunni residents of Zabadani and Madaya. This would consolidate the Shi'a presence in the area from Damascus to the Lebanese Beka'a Valley. Iran also demanded the bodies of slain militia fighters that it had sent to Syria, including members of Hezbollah in Lebanon, and Iraqi militias. It also demanded information about any fighters that had been taken prisoner.

The Turkey-Russia agreement stalled repeatedly, and although not part of the original Aleppo agreement, it now includes evacuation plans for Foua, Kefraya, and the parts of Madaya and Zabadani as well.Significantly, the USA and EU played no role in the recent surrender agreement, and initially were unaware of it.

With this reconfiguration in interests and power, Syria could be divided into zones of influence, allowing for some cooperation despite the divergences in the Russian, Iranian, and Turkish positions. The prominence of Jabhat Fatah Al-Sham in Idlib may complicate this plan, especially since Idlib directly borders Turkey, and because the group often coordinates with Ahrar al-Sham, which is supported by Turkey and some Gulf countries. Fissures in Ahrar al-Sham have already emerged, and a splinter group, Jaish Al-Ahrar, which is critical of the former’s reliance on Turkey and its supposed antagonism to Jabhat Fatah Al-Sham, has been formed.

With Aleppo back in Syrian government control, Asad has gained the upper hand in the conflict over control of the state. However, the conflict is not about to end; it will probably continue at a lower intensity as the regime conducts operations in Idlib and other rebel-controlled regions, and because rebel groups will alter their tactics in favour of smaller insurgent operations. Many opposition groups may be forced to accept a political solution as their position further weakens, but it is unlikely the regime will allow the opposition autonomy over areas it currently controls. Earlier versions of the surrender agreement, which would have allowed for the maintenance of the east Aleppo local council, and which was accepted by Moscow and Ankara, was discarded because it was rejected by the regime. In many places opposition to the regime from citizens will endure, and not all rebel groups will accept such an eventuality, arguing that they cannot allow all their sacrifices to amount to nought.