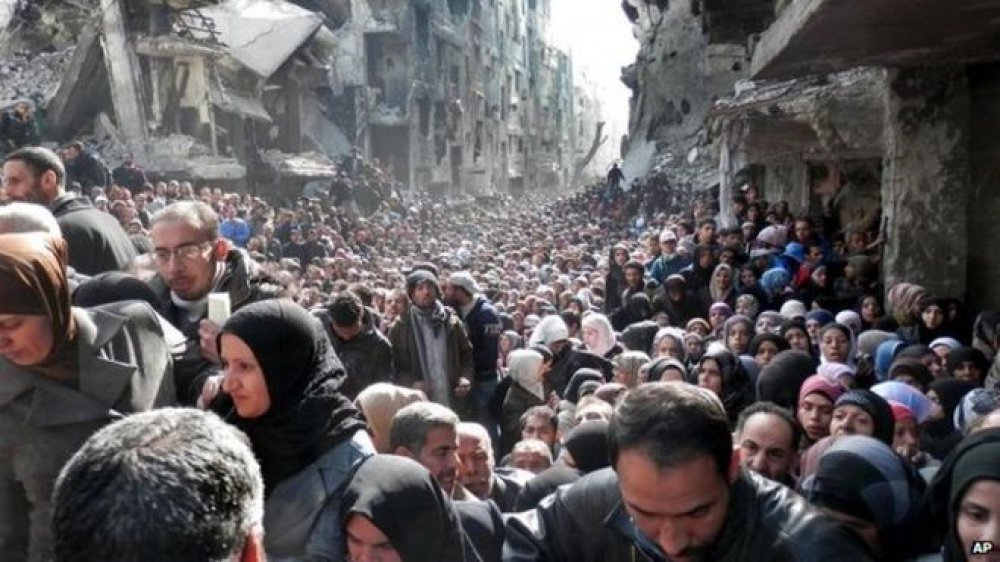 In early April 2015, sudden fighting broke out in the Yarmouk refugee camp between groups affiliated to the Islamic State group (IS) and Aknaf Bayt al-Maqdis (ABM), which is linked to Hamas. The already dire humanitarian situation in the camp has since worsened for about 15 000 Palestinian civilians still besieged there, out of the population of over 150 000 before the Syrian war began.

Suqur al-Joulan was forced out by a number of groups, led by ABM, inside the camp. They consisted exclusively of Palestinians, with most being Hamas members. Later, the situation developed in such a way that two main groups controlled most of the camp: ABM and Jabhah al-Nusra. For the past eighteen months there have been many initiatives seeking to maintain the camp’s neutrality and ending the siege. These involved the Palestine Liberation Organization (PLO) and a number of other Palestinian factions and popular committees. However, all these initiatives failed.

Meanwhile, the Syrian regime refused to allow the evacuation of civilians trapped inside the camp and allowed the entrance of only a limited amount of aid sent by European convoys, United Nations Relief and Works Agency (UNRWA) and some local NGOs. The presence of civilians led to a cautious truce between the regime and the opposition, which did not gain from subjecting the camp to bombardment or act in a way that would deprive it of aid. It was also not in the regime’s interest to be accused of targeting Palestinian refugees.

This equation ensured a state of relative ‘calm’ for about two years for regime forces in al-Qa'ah region overlooking Yarmouk’s northern entrance, which was the first flashpoint between the regime and opposition south of the capital. One of the reasons, therefore, that initiatives to keep the camp neutral had failed was that any settlement allowing civilians freedom of movement would remove the Yarmouk ‘buffer zone’ between regime and opposition lines south of the capital. 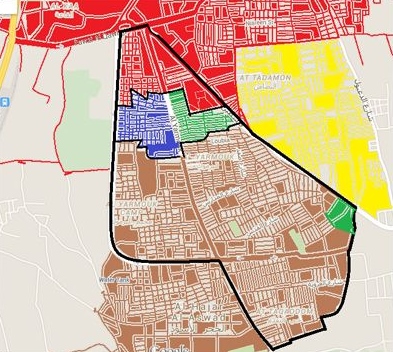 In the past five months there has been a wave of assassinations inside Yarmouk Camp which targeted a diverse group of individuals. They were all killed professionally and mysteriously, and included activists affiliated to Fatah, Hamas and other Palestinian factions. This wave was finally confronted with the assassination of Yahya Hourani (aka Abu Suhaib), a former Hamas official in Yarmouk, and a leading medical aid worker.

ABM first accused IS in the nearby al-Hajar al-Aswad area of orchestrating the murder, then detained IS members. Within twenty-four hours, IS raided the camp and besieged the Diaspora Office which is run by ABM. IS quickly took control of most of the southern parts of Yarmouk, which had previously been under the control of al-Nusra Front, sparking suggestions that there had been a prior agreement between the two groups about allowing IS in.

ABM subsequently clashed with IS in several parts of the camp. On the first two days of April violent fighting took place at a flashpoint along Nouh Ibrahim Street, which divides eastern Yarmouk nearly in half, and in 'Atta al-Zeer Street. On the third day, IS advance, thanks to its large contingent of around 1 000 fighters and adequate weapons supplues, while the Nusra Front prevented any reinforcements for ABM from entering the camp and advancing from the south.

As ABM retreated to the northern part of Yarmouk, forces from Fatah al-Intifada backed by regime forces and the Popular Front for the Liberation of Palestine-General Command (PFLP-GC) advanced and seized an area in the north of the camp. This strengthened the regime’s presence along Palestine Street, and tightened the siege on ABM, which by the fifth day had retreated to a strip of 400 metres.

This development sparked panic among Yarmouk’s refugee population, especially after IS beheaded two young men and dumped their bodies in the street. Meanwhile, the humanitarian situation worsened as IS captured the only water distribution point in the camp, close to the Palestine Mosque, and all attempts to bring in food aid were suspended.

On the sixth day, ABM was able to rally a number of its members in the southern part of the camp, and it attacked IS positions, retaking the Cultural Centre area and a hospital. The next day a small group of defected Palestine Liberation Army fighters led by Colonel Khalid al-Hassan attempted to provide support to ABM in the northern part of the camp, launching a counterattack against IS. Hassan was killed in the fighting, and the current situation sees ABM under siege by IS and Nusra Front on one side, and by regime forces on the other.

In light of these developments, and the clear military advances by IS, scenarios for the future of Yarmouk will be linked to the future of the armed groups there. Some of these scenarios are:

The withdrawal scenarios all look completely unlikely in the event the first or second scenarios pan out. In addition, attempts at a deal with ISIS and Nusra Front have already failed. There is also no appropriate mediator, whether Palestinian or foreign, that can assist in this regard. In the event that a withdrawal does happen, it will likely take place through a deal with the regime and with Palestinian or international guarantees, similar to the withdrawal of the fighters from Homs nearly a year ago. Although the issue of Yarmouk has reached the UN Security Council, discussions have centred on the humanitarian aspect, without any discussion about the fighters.

The most plausible scenario is that the ABM will manage recapture the initiative, and be able to rearm and resupply itself, with a view to seizing back control of Yarmouk or part of its northern area. The regime may allow this if it would result in a restoration of the status quo that had been in place for the past two years. It is also possible that ABM could co-opt Ahrar al-Sham, which controls a western part of Yarmouk, if the latter’s concerns regarding IS and Nusra Front are addressed.

Whatever scenario unfolds for the Palestinian fighters, Yarmouk Camp’s future looks bleak, irrespective of whether IS controls it fully or partially, or whether it is recovered by the Palestinian groups – either ABM or some faction loyal to the Syrian regime. Palestinians in Yarmouk will continue to pay a heavy price until the Syrian crisis reaches a stable and permanent outcome, or major changes take place in the battlefield in southern Damascus. If IS remains in control of parts of the camp, an increasing number of civilians will attempt to leave, as IS’s indifference to the popular sentiment will alienate more people and make their daily lives even more miserable.

Last modified on Friday, 28 August 2015 13:16
Tweet
More in this category: Will the Syrian regime survive? »
back to top