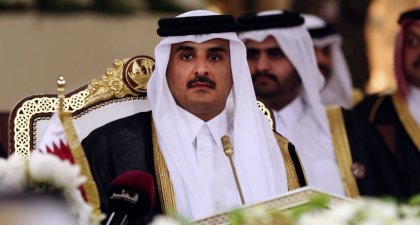 The 5 June decision by Saudi Arabia (KSA) and the United Arab Emirates (UAE), and their allies and proxies – Egypt, Bahrain, the Maldives, Mauritania and rival governments in Libya and Yemen – to sever diplomatic and other links with Qatar is payback for Qatar’s support of the wave of uprisings in the Middle East and North Africa in 2010-2011. It represents, for KSA and UAE, another phase in their process since 2011 to reverse the changes brought about by the uprisings.

The sanctions on Qatar aim to force the government of Tamim bin Hamad Al Thani to alter its foreign policy – particularly regarding its warming relations with Iran, and to end its financial and political support for Islamist dissidents in the region such as the Muslim Brotherhood and Hamas.

The Saudi-led move followed and was encouraged by US President Donald Trump’s visit to KSA in May, and his 21 May speech in Riyadh where he supported stronger action against Iran, and spoke out against terrorism – including Hamas in his list of terrorist groups.

The main reason advanced by KSA and UAE for harsh measures such as the land-sea-air embargo and travel prohibition for citizens of these countries, was a statement attributed to Al Thani, in which he allegedly praised Iran’s regional role and criticised states seeking to declare the Muslim Brotherhood (MB) a terrorist organisation. The 23 May statement, published on the website of the state-owned Qatari News Agency, is likely a hack, as the Qatari foreign ministry has claimed. No audio or video footage exists of the emir’s speech, purportedly presented at a graduation ceremony for National Guard officers at the Al Udeid base. Although the alleged statement may reflect the broad trajectory of Qatari foreign policy, Al Thani is unlikely to have expressed such sentiments publicly. Moreover, statements praising Hizbullah and criticising the US are at odds with Qatar’s policy and national interest, especially considering that Qatar supports forces opposing Hizbullah in Syria, while the US troops stationed at Al Udeid are critical to Qatar’s security. 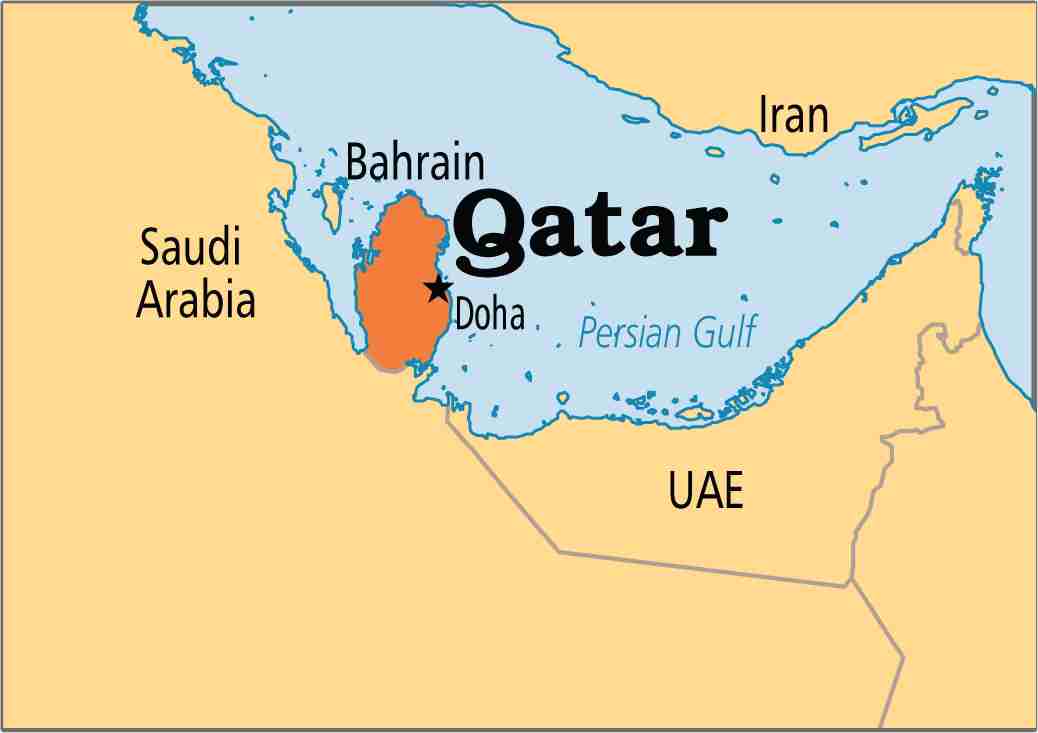 Nevertheless, there are indications of a warming of relations between Qatar and Iran, as evidenced by Al Thani’s 27 May congratulatory phone call to Iran’s re-elected president, Hassan Rouhani, during which he proposed enhancing Qatari-Iranian ties. Further, reports that Qatar paid a $1 billion ransom for Qatari royals kidnapped in Iraq, and that about $700 million ended up with Iran and Iranian-backed Iraqi militias, also enraged the KSA and UAE. KSA viewed these moves as compromising its battle with Iran for regional hegemony. For the Saudis, this is the main reason for its action against Qatar.

The UAE, on the other hand, used the KSA action to pursue its agenda of trying to force Qatar to cease support for the MB and other such groups. Since 2011, it has worked strenuously to undermine and destroy the MB-aligned organisations throughout the region through attempting to finance parties such as Nidaa Tounes in Tunisia (against the Islamist Ennahda), by militarily supporting the campaigns of Khalifa Haftar in Libya, and by supporting the 2013 coup in Egypt which overthrew the MB’s Mohammed Morsi.

Both KSA and UAE regarded Qatar’s support for civil society action during the 2011 uprisings as incompatible with their regional aims, upsetting the regional balance, and potentially ultimately threatening their own monarchies.

The sanctions, however, did not happen entirely suddenly and without careful consideration. In 2014, the KSA and UAE, together with Bahrain, recalled their ambassadors from Doha in a successful attempt to weaken Qatari ties with the Muslim Brotherhood. The current sanctions follow a campaign by, mainly, the UAE to demonise Qatar, particularly in the USA where, in the run-up to the breaking of ties, fourteen op-eds in US media attacked Qatar and called for the USA to downgrade relations with that country. And, at the end of May, Saudi media alleged Qatar’s foreign minister, Mohammad bin Abdul Rahman Al Thani, secretly met with Qasim Sulaimani and discussed enhanced intelligence cooperation between the two countries.The cutting of ties by Egypt, Yemen, the Maldives, Mauritania, the House of Representatives in eastern Libya, and the Abd Rabbu Mansour Hadi government in Yemen was primarily in support of the Saudi and Emirati benefactors of these actors. There has been some suspicion in the region that KSA and UAE would act against Qatar, but the suddenness (and severity) took everyone by surprise. It is possible that the suddenness is related to recently leaked email correspondence of UAE ambassador to Washington, Yousef al-Otaiba, which reveal his country’s disdain for US-Qatari relations, anger at the US military base in Qatar, and envy about Qatar’s hosting of the 2022 FIFA World Cup. The emails hint at Otaiba’s role in the anti-Qatar campaign in Washington over the past few weeks.

To justify the action, the two countries have accused Doha of threatening the region’s stability, ‘adopting’ terrorist organisations – including the Islamic State group, and supporting opposition Shi'a groups in Bahrain and eastern Saudi Arabia. Much of this is untrue. What is true, however, is that the UAE-KSA and Qatar also support different (even opposing) sides in Egypt, Libya and Syria, and both countries regard Qatar as an obstacle to their agenda for the region.

Following the conclusion of the 2015 Iran nuclear deal, Saudi Arabia has attempted to contain Iran’s growing influence in the region. The kingdom has sought to enhance this containment strategy by advocating unity among ‘Sunni’ states, and by tolerating (and even sponsoring) Islamists linked to the MB, such as Yemen’s Islah movement. Trump’s singling out Iran as the greatest regional threat emboldened KSA, and especially its inexperienced deputy crown prince Mohammad bin Salman. The Riyadh declaration, which KSA issued after Trump’s visit, vociferously admonished Iran’s regional role and advocated a coordinated containment strategy. However, Qatar was regarded as not being entirely compliant with KSA’s wish to isolate Iran.

The UAE focused mainly on Qatari support for Islamists such as Hamas and the MB, which the Emiratis believes pose a greater threat to them than Iran. This conformed to Cairo’s position on the MB, and Egypt thus fell in line with the UAE, already a major financial backer of the Egyptian state under Abdel Fattah el-Sisi. Abu Dhabi also used the situation to reduce tension between forces it supports in Yemen and those supported by KSA. Pressure had been building since June 2016, when the UAE redeployed its frontline forces to southern Yemen, to consolidate the gains of the secessionist Southern Movement (Al-Hirak), in opposition to Saudi interests. Worsening the situation, in February 2017, forces loyal to the UAE prevented Hadi, heavily supported by KSA, from landing at Aden’s airport, forcing Riyadh to mediate in an attempt to enforce Hadi’s ‘prerogative’. There was likelihood of even further deterioration when the UAE-supported forces routed those of Hadi, and consolidated control over the Aden airport. At the heart of these differences is UAE opposition to Saudi support for Yemen’s MB-aligned Islah movement.

The UAE thus expertly exploited the inexperience of Saudi Arabia’s thirty-one-year-old deputy crown prince to create a false consensus around Qatar. Significantly, the suspension of Qatari troops from Yemen as part of KSA-UAE sanctions will empower UAE-supported groups, at the expense of Saudi-supported Hadi. Although Qatar’s troop contingent was small, Doha and Riyadh have comparable interests in Yemen – which are not the same as the UAE’s.

In what is definitely a major diplomatic crisis for the Gulf, other countries are also becoming engaged. Apart from KSA and UAE allies that also cut ties with Qatar, Jordan has downgraded its links. On the other hand, Iran offered to export food to Qatar from Iranian ports – which are around 200 nautical miles from Doha, and Turkey’s president, Recep Tayyip Erodgan, defended Qatar, opposing the sanctions. Furthermore, on Monday, less than a day after the sanctions were implemented, Turkey exported planeloads of food to Doha to replace food that had previously been imported from KSA. The USA, which has its largest Middle East military base, and 11 000 troops, in Qatar, has issued contradictory messages. While Trump tweeted support for the sanctions, claiming responsibility for its success, the Pentagon praised Doha for hosting US troops and for its ‘enduring commitment to regional security’, and US secretary of state Rex Tillerson offered to mediate. The USA will likely attempt to ensure the smooth continuation of relations with both Doha and Riyadh, and will seek to maintain the unity of the Gulf Cooperation Council.

As in 2014, Kuwait and Oman will attempt to mediate a resolution to the crisis. Neither has severed ties with Qatar, and Kuwait’s emir has been shuttling around the Gulf to seekagreement on a mediation process. Both states maintain good ties with Iran, and Oman was involved in preliminary negotiations for the nuclear dealin March 2013, helping to ensure face-to-face talks between Iranian and American officials prior to the commencement of public negotiations. However, resolving the dispute this time will be more challenging, especially since the demands on Qatar are multifaceted, and because the measures instituted are more wide-ranging than in 2014.

Qatar faces three possible options. First is the unlikely possibility of it aligning with Iran. Second, it could buckle under the pressure and give in to KSA-UAE demands, especially since it depends on Gulf transit routes for its food security, and because of its strong economic links with Saudi Arabia. Such a capitulation could mean that members of Hamas and the MB residing in Doha will be expelled (possibly to Turkey and Lebanon). Further, Qatari media activities will be severely curtailed, and the AlJazeera network, in particular, will have its wings clipped and will begin resembling other Gulf media outlets, in addition to the likely shutting down of Britain-based Al-Arabi al-Jadid as well as other websites financed by Qatar. Palestinian exile and intellectual Azmi Bishara will likely be expelled as per the demand of the KSA-UAE alliance. Qatar’s links with Iran will also have to be firmly cut. The third option is that Qatar remains defiant, and joins with Turkey to informally form a third axis – which could include Oman and Kuwait, and could see some involvement of Iran. With countries such as Turkey and Pakistan seeking to balance relations with Saudi Arabia and Iran, albeit unconvincingly at times, this third axis is already slowly emerging. Heavy-handed measures such as the current siege on Qatar are increasingly forcing smaller states to unhappily choose sides, accelerating the development of a third path, even if informally. The possibility of the emergence of such a third axis (and the possibility of Qatar refusing to give in) increased dramatically Wednesday night when the Turkish parliament passed legislation to facilitate the posting of as many as 3 000 troops in the Turkish military base in Qatar. Qatar might have momentarily been on the ropes, but its allies (and hopeful allies, such as Iran) have come out swinging. David Hearst argues that, in fact, the action against Qatar is doomed to fail, and Doha's two Gulf antagonists had bitten off more than they can chew.

The increasing tension also indicates a weakening of the Gulf Cooperation Council (GCC), which was established in 1981 to ensure unity and coordination among Gulf countries, as a response to the 1979 Iranian revolution. Although GCC countries have been coordinating on regional policing, established the Peninsula Shield Force military arm, and signed agreements on economic and taxation matters, the organisation has been increasingly fragmented by different stances of individual states. In 2013, for example, Oman was widely criticised for hosting secret negotiations between Iran and the USA, prior to the nuclear deal; in 2014, Oman and Kuwait refused to recall their ambassadors from Qatar; and in 2016, when KSA severed ties with Iran, Bahrain was the only GCC member to follow suit. No matter how the current crisis ends, the GCC will emerge weaker. If Qatar refuses to capitulate, that could spell the beginning of the end of the council.