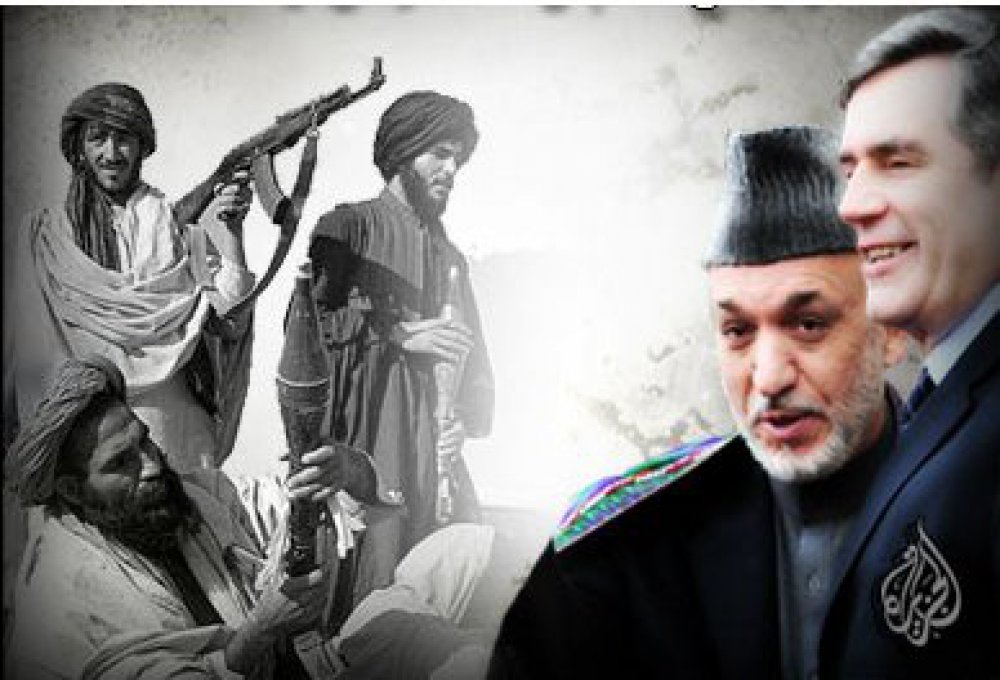 The proposed dialogue and Taliban's position

After days of silence about the conference and its outcomes, the Afghan Taliban published its response to the negotiations on "The Emirate", its website, saying that it would continue to fight until foreign forces were expelled, and that victory was only a stone's throw away. It said the mujahideen would not surrender to the temptations arising from the conference, asserting that the news from the London conference was that it permitted the collection of about 500 million dollars, under the pretext of "political bribery".
The Taliban insists on two fundamental principles (which have not changed since the beginning of this conflict): first, rejection of the current Afghan Constitution; and, second, a demand for the withdrawal of foreign forces from Afghanistan. Both the constitution and NATO forces are vital to the project of Western powers in Afghanistan, and to Karzai as well. The addition of 30,000 U.S. troops in Afghanistan consolidates the Taliban's conviction that the U.S. maintains its insistence on the military option. This perception has been reinforced by the recent escalation of military operations in Helmand Province, and the escalated targeting of Commander Sirajuddin Haqqani's network in Pakistan's northern tribal Waziristan state. In this regard, the U.S. rate of air strikes increased this year by 75 percent over last year, thus reflecting the intensity of strikes in the first month of the new year.
The Taliban believes that the purpose of the U.S. launching a dialogue with the group is to lure its fighters. This is why, the Taliban suggest, the Western offer came in the form of dialogue with "moderate elements" of Taliban, which is what Karzai had called for when he had removed the names of some Taliban leaders from his blacklist so that he could talk to them. Notably, those whose names had been removed from the list have nothing to do with the movement, and have no influence on the battlefield. Furthermore, of the 140 blacklisted names, only five have been removed.
This Taliban view has been confirmed by the head of the U.S. Central Command, General David Petraeus, who said there was a need for safe areas where the lured Taliban militants would be accommodated as a prelude to the reconciliation plan. This arrangement was endorsed by the NATO commander in Afghanistan, General Stanley McChrystal, who asked for the approval of 1.5 billion dollars to be used for luring Taliban fighters. McChrystal had told the Financial Timesthat war should stop and a peaceful solution must be reached. The NATO Secretary-General, Anders Fogh Rasmussen, however, dismissed the views of Karzai and American officials when he said in Istanbul that the new plan did not mean winning over or bribing Taliban fighters.
It is clear to us that, should there be any negotiations, these will be with former Taliban leaders who currently have no influence on the ground; active Taliban forces will still be excluded. Such a process will position the Western anti-Taliban powers in an ambiguous position because they have not made it clear what they want out of such a process, or who they want to talk to. The ambiguity was emphasised by the Afghan president, who went to Saudi Arabia at the beginning of February to invite the kingdom to convince the Taliban to join talks and to play a mediating role, while he cancelled a scheduled meeting with the Organization of Islamic Conference, which was supposed to facilitate or assist in the process of dialogue, without explaining the reason for the cancellation.
In general, it is clear that negotiations and dialogue are a U.S. and Western need; the Taliban did not ask for talks. Over the past few years, the U.S., Britain and France made relentless efforts, both publicly and privately, to induce Taliban leaders with money, but to no avail.

If the involved Western states do not cancel the blacklist of 141 banned Taliban leaders, the Taliban will not respond favourably to the invitation to negotiations and dialogue. First, because the Taliban is in no hurry to talk, and believes that its opponents are becoming exhausted while the movement is growing in power; and, second, the movement regards any proposal that distinguishes between "moderates" and "extremists" as a process of "buying the conscience" of its fighters, and not as a project for reconciliation or dialogue.

Will the Taliban split on the dialogue issue?
Given the Iraq experience, it is possible that the mere acceptance by the Taliban – or by some elements of it – of the principle of dialogue will result in a split within the movement's ranks. What makes the Afghanistan situation different from that of Iraq, however, is that the Taliban leadership is united, coherent, and derives its legitimacy from the "Ameerul Mu'mineen" (the leader of the believers) who, they believe, is legitimate and cannot be disobeyed under any circumstances. This leader, Mullah Omar, continues effectively to exercise his leadership and still has the ability to control his followers religiously, militarily and politically; there has not yet been a case of rebellion or a real split in Taliban ranks. There have been a few individual defections, such as Commander Abdul Salam of Helmand province, who then lost his legitimacy, and whose defection had no affect on the Taliban's strength in Helmand. On the contrary, according to some experts, the defection increased the Taliban's strength and proved that the split was meaningless.

It is, therefore, difficult to say with certainty whether the movement will split in the event of either acceptance of dialogue or of its rejection, as long as the movement's political and military leaders are united. Thus far, they have remained in agreement on core issues that affect the movement, such as the issue of the withdrawal of foreign troops from Afghanistan, and rejection of the constitution. In other words, they have been united on their rejection of the occupation and its results over the past few years.

It is worth mentioning another possibility in the event of the Taliban accepting the dialogue. There are small groups within the overall structure of the movement who are loyal to Mullah Omar, but who reject the principle of dialogue. Among them is Mullah Dadullah, a former Taliban military commander. One group that falls into this category is that of Sirajuddin Haqqani – son of Commander Jalaluddin Haqqani – in south-eastern Afghanistan, which seems to have developed a global agenda, unlike the mainstream Taliban which has a purely local Afghan agenda. An indication of their global sights is their announcing the inclusion of the name of Pakistani neurologist Aafia Siddiqui – who was recently indicted in U.S. courts for murder – to the list of 21 Taliban prisoners who should be released in exchange for the release of a U.S. soldier in the movement's custody. Such a trend is contrary to the desire of the mainstream Taliban: to maintain the conflict as a local Afghan one.

Saudi Arabia's precondition for its role in mediation efforts with the Taliban is that the movement must abandon al-Qaeda; most observers believe this is improbable. The Taliban lost Afghanistan and fought against more than 40 countries because of its insistence on hosting and protecting al-Qaeda. Taliban members also fought for Mullah Omar who they describe as a man of principles and of his word. An example of this quality, for them, was his commitment to maintaining his promise of protection given to al-Qaeda. It cannot, therefore, be expected that he would change his position towards al-Qaeda.
In addition, the small groups that fall under the Taliban and which are militarily most influential on the ground, such as the Haqqani and Dadullah groups, identify themselves with al-Qaeda and may share elements of the latter's thought and practice.
Confirming this position is the information we have that the Taliban has presented three conditions for it to be willing to be involved in dialogue:

The first condition, in particular, is contrary to the Saudi requirement for its engagement in the dialogue process, which means that advocates of the dialogue must search for an alternative venue for the negotiations.

It is unlikely that there would be a dialogue in the short term but if it did occur, the normal principles, mechanisms and complexities of international negotiations that are used in international diplomacy may not apply to Afghanistan and the Taliban in particular. Saudi Arabia remains the favourite to mediate in such a dialogue because of its spiritual influence (for example, its invitations for pilgrimage – hajj and umrah – to Afghan parties), and financial influence. The question of al-Qaeda, however, will remain an obstacle. There are other candidates who could play this role, such as the United Arab Emirates (UAE), which is preferred by the Pakistani government, thanks to President Asif Ali Zardari's good relations with the UAE, and lack of a similar relationship with Saudi Arabia. A UAE role, however, may be jeopardised by signs of tension between the Taliban and the UAE. Other possibilities are Turkey and Pakistan. The latter will not be seen as neutral, however, and while the Taliban will accept a Pakistani role, there will be objections from Iran, India and Afghanistan.