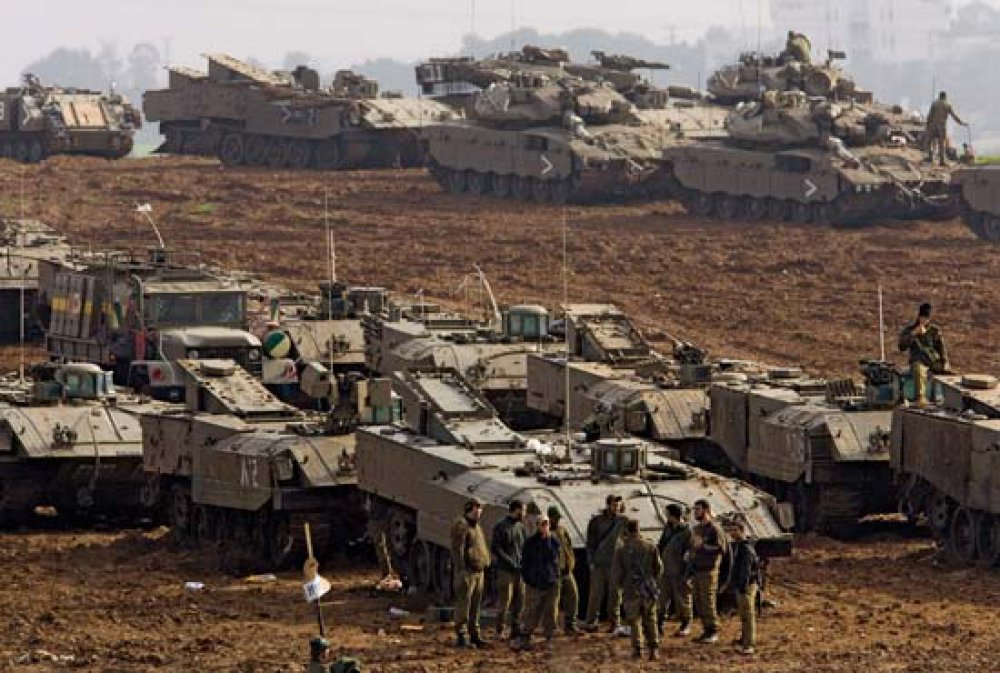 So passionately does Israeli military spokeswoman, Major Avital Leibovich, express the hardship that close to a million Israelis have had to endure over the last eight years of rocket fire, that even some impassioned observers sympathetic to the plight of the latest Palestinian victims might be forgiven for wavering. Herein lies the tragedy of the latest bloody chapter in the Israeli / Palestinian conflict: how shallow is our grasp of history and how quickly we forget the brutal reality of 60 years of Israeli dispossession, massacre, forced-exile, and military occupation that have been imposed on the Palestinian people.

The colonial foundations of the State of Israel are a matter of indisputable historical fact; the Zionist settler-colonial enterprise in British-Mandate Palestine, of predominantly East European Jewry, was carried out at the expense of an indigenous Palestinian population that has continuously inhabited the land for at least 1200 years, in spite of whatever promises might have been made in the Hebrew Bible.

The burden of history weighs heavily on the Palestinian problem, and what is happening today can only properly be understood by reflecting on this history. In spite of all Israel's rhetoric about democracy and liberty, every Israeli administration since the establishment of the Zionist state has implemented expansionist colonial policies that have continuously appropriated Palestinian land. In fact, illegal settlement activity and land appropriations for "security" concerns and the construction of the Apartheid Wall have been more intensive and sustained after the signing of the "historic" Oslo Accords in 1993, which promised to establish a Palestinian State within five years.

The agenda of the Palestinian national movement, initially led by Yasser Arafat's Palestinian Liberation Organization (PLO), has not been as rigid or consistent as the Zionist agenda. Palestinians have made many concessions since the beginning of their struggle, when the main objective was to liberate all of Palestine. Today, even Hamas is willing to accept a two-state solution.

Khaled Mishaal, Head of the Hamas Political Bureau, convened a press conference in Damascus on the 24 November 2008, where he called for the establishment of a Palestinian state on the armistice borders of June 1967 with Jerusalem as its capital, and with the granting of the right of return to all Palestinian refugees. However, Israel is not content to deal with Hamas because it knows that there is a stronger possibility for it to extract further and greater territorial concessions from President Mahmud Abbas; this is the primary motivation behind its latest attempt to crush Hamas.

New peace initiatives will inevitably be put forward, but all indications are that Israeli leaders will continue chasing after the Zionist dream of an ethnically pure Jewish State, where there are no Arabs or where Arabs will have to be content to live as landless serfs under the authority of Zionist feudal lords. Tzipi Livni, Israeli Foreign Minister and head of the Kadima Party, recently announced that Palestinian citizens of Israel (or Israeli Arabs, as Israel prefers to refer to them) should leave Israel once a Palestinian State was established, because "the national solution for you is elsewhere".

Her biggest rival in the forthcoming Israeli elections, Bibi Netanyahu, holds views that are no less enlightening, but less enlightened. The charter of his Likud Party calls for the annexation and settlement of the "entire Land of Israel", which comprises the current territory of the State of Israel, as well as the West Bank, the Gaza Strip, the Golan Heights, and the whole of Jerusalem.

The next time that Major Avital Leibovich or Rabbi Warren Goldstein invokes the "moral clarity" of the Israeli State, one could do well to ask them to explain the moral basis of their ongoing commitment to racist policies, and why it is that in Israel only Jews are to be accorded full rights of citizenship and treated as human beings while Palestinian citizens of Israel are not. The next time President Shimon Peres asks "why do they hate us?" as he did during the Israeli invasion of Lebanon in 2006, or "Why are they trying to hurt us?" as he did more recently, it would be more productive for him to glance at a map rather than into his crystal ball.

Last modified on Wednesday, 18 February 2015 13:44
Tweet
More in this category: Not an Analogy: Israel and the Crime of Apartheid »
back to top