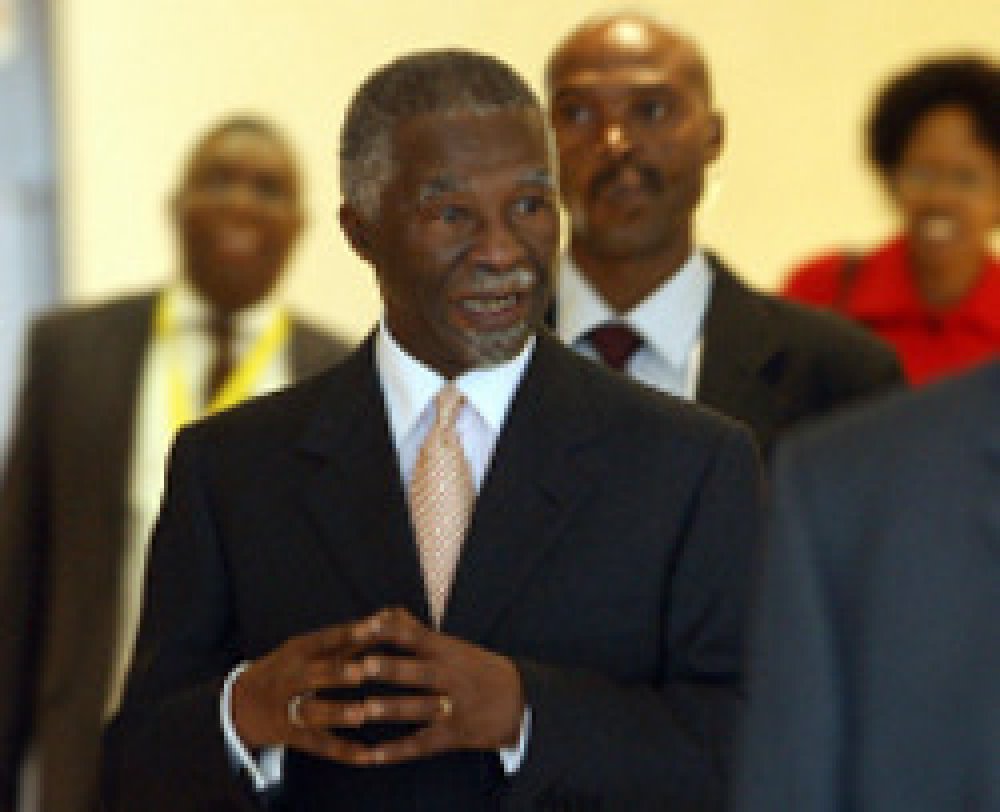 Al-Jazeera invited us to address this Forum on the topic "Talking to the Enemy: the South African Experience".

We should perhaps conclude with some of the most important lessons specific to this experience.

One of these is that the path to the negotiations became possible once the dominant ruling power in our country realised that it could not achieve its objectives by any other means, including by continuing resort to the considerable means of repression it had at its disposal.

This realisation was not based on any refusal by the apartheid security forces to carry out their commands, but on the understanding by the political leadership that:

The second is that because the liberation movement had always preferred the strategic option of a negotiated settlement, it was not difficult for this movement to agree to and engage in negotiations once it was convinced that the struggle it had waged had obliged the enemy to negotiate.

The third is that the negotiations became possible once, from the beginning, there was agreement on the fundamental objective pursued by the liberation movement from its foundation, and therefore a necessary outcome of the negotiations process - the creation of a democratic and non-racial South Africa.

The fourth is that the negotiations were facilitated by the fact that despite the participation of 19 separate political entities in the negotiations, in reality there were two dominant forces-- the ANC and the National Party/apartheid regime: ultimately the negotiating parties agreed that when these two reached an agreement this would be accepted as representing an agreement by what was categorised as "sufficient consensus".

This meant that outside of these two formations there would not emerge other forces with sufficient strength and support to derail the process of negotiations. And indeed the two principal belligerents took the necessary steps to obviate this possibility.

The fifth is that the liberation movement understood that it was strategically the leading force in the negotiations, had most to gain from the process, and therefore had the principal obligation to ensure the success of the negotiations: for this reason it accepted that it would have to enter into some compromises favouring its enemy, and thus avoid seeking a winner-take-all outcome, to encourage the regime to accept the fundamental political goal of the liberation movement of the formation of a democratically elected government.

The sixth is that because of the absence of any external mediator, the negotiating parties could focus on the real issues that would bring their constituencies into the settlement, without having to proceed in a manner that would have to take into account whatever might have been the views and interests of international interlocutors acting as mediators: this also meant that the negotiating parties had to take full ownership of the outcomes of the negotiations, with no possibility to renege on the basis that external mediators had obliged them to accept propositions with which they were not comfortable.

The seventh and last of these lessons was that effectively the Soviet Union had collapsed. This deprived the regime of the possibility to secure the support of the major Western governments on the basis that it was their ally in the struggle to defeat 'Soviet domination' first of South Africa and of Africa as a whole. In this context we must also mention the decision taken by the Government of Zimbabwe to postpone any action to resolve the land question in their country. The leadership of independent Zimbabwe understood that radical land reform in their country would have alarmed the apartheid regime, encouraging it to oppose the negotiations, on the basis that the ANC would follow the Zimbabwe example and dispossess the South African whites of their land and property.

In a spirit of 'glasnost', of transparency, we must report that Al-Jazeera originally asked us to address this Forum on the relevance or otherwise of the South African experience of 'talking to the enemy' to the struggle to resolve the Palestine-Israel conflict.

Informed by the principle that 'fools rush in where angels fear to tread' we chose to be an angel and declined this offer, agreeing only to give an account of the South African experience, conscious as we are of the complexity of the critically important and urgent challenge of resolving the Palestine-Israel conflict and the larger regional Arab-Israel conflict.

We therefore leave it to this important Forum to draw the relevant conclusions from what we have said concerning the South African experience.

However, if I may, I would like to say that it would seem to me that some of the elements that differentiate the two situations, namely the South African and the Palestine-Israel conflicts, are that:

It is up to this Forum to assess the correctness or otherwise of the observations we have dared to make relating to the comparison between the South African and the Israel-Palestine experiences, perhaps thus, like a fool, rushing in where angels fear to tread.

If the South African experience, when placed in a matrix relating to the Palestine-Israel situation, has even a glancing relevance to the latter, it will be up to the Forum to decide whether the negotiations about this extremely important matter are likely to succeed or not.

If the latter seems to be the most likely outcome, bearing in mind the lessons of the South African success story, the Forum might find it appropriate to consider what then should be done to ensure the success of the Israel-Palestine negotiations, and as speedily as possible, hopefully during President Obama's term of office.

In this regard I would like to agree with President Obama when he said in Cairo:

...it is also undeniable that the Palestinian people - Muslims and Christians - have suffered in pursuit of a homeland. For more than 60 years they've endured the pain of dislocation. Many wait in refugee camps in the West Bank, Gaza, and neighbouring lands for a life of peace and security that they have never been able to lead...So let there be no doubt: the situation of the Palestinian people is intolerable...

Part of the common tragedy is that almost a year after President Obama made his passionate [Cairo] appeal, yet more tears and more blood have been shed, because a settlement of the Israel-Palestine conflict has not been achieved and is evidently not yet in sight.

Surely, as President Obama suggested, those of us who are neither Israeli nor Palestinian have an obligation honestly to ask ourselves the question and act on the answer to that question, about what we should do to help create the conditions for the earliest possible success of the vital process of mediating the resolution of the Palestine-Israel conflict!

Like many Palestinians who dream of the realisation of the vision of which President Obama spoke, I too belong to a liberation movement and as such, have had the privilege to interact with many leaders of the people of Palestine, including the late Yassir Arafat, Mahmoud Abbas, and through envoys, Khaled Meshal, and indeed with some of the leaders of the Israeli people, including Ariel Sharon, Ehud Barak, Ehud Olmert and Tsipi Livni.

Thus do I, too, share the dream for the birth of a viable, prosperous and independent State of Palestine.

During our lifetime, some prominent representatives of a world power made bold to say that-- "Anyone who thinks (the ANC) is going to run the government in South Africa is living in cloud-cuckoo land." Through their efforts, during our lifetime, the people of South Africa made the statement that these soothsayers of doom were wrong.

Therefore I say to those who persist in the fight for the birth of a viable, prosperous and independent State of Palestine - the struggle continues, and victory is certain!

Thabo Mbeki is a former President of South Africa

Last modified on Wednesday, 18 February 2015 13:46
Tweet
More in this category: "Peace process" cannot be salvaged »
back to top