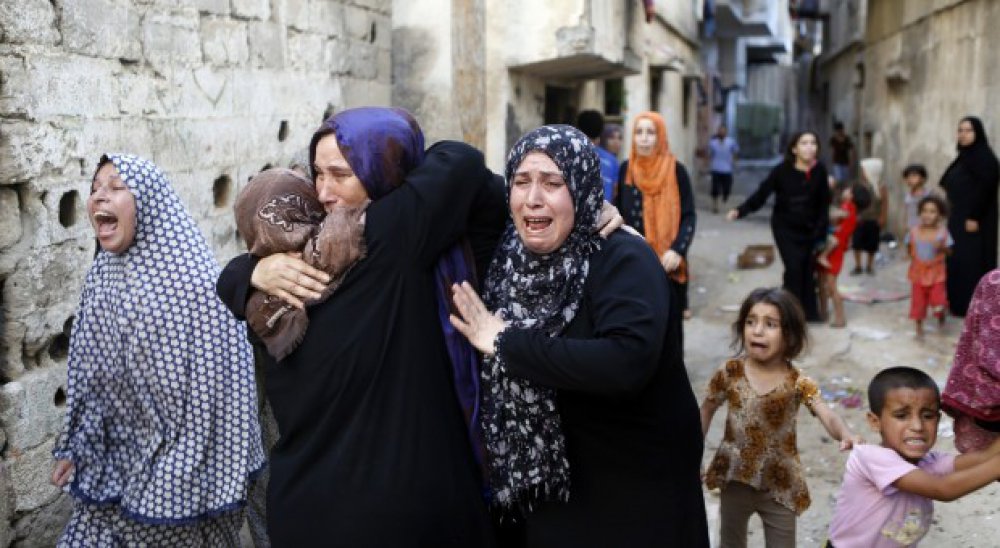 ‘When women are violated like men who but for sex are like them – when women’s arms and legs bleed when severed, when women are shot in pits and gassed in vans, when women’s bodies are salted away at the bottom of abandoned mines or dropped from places into the ocean, when women’s skulls are sent from Auschwitz to Strasbourg for experiments – this is not recorded as the history of human rights atrocities to women...When things happen to women that also happen to men, like being beaten and disappeared and tortured to death, the fact that they happened to be women is not noted in the record books or human suffering…What happens to women is either too particular to be universal or too universal to be particular, meaning either too human to be female or too female to be human.’ – Catherine McKinnon, ‘Are Women Human?’

The suffering of women and children in times of conflict is often generalised, or masked and left unspoken; and statistics are often manipulated to minimise the focus of the devastating effects of war on women.

With the Syrian conflict having escalated into a full-blown war, the impact on women and girls has been catastrophic and is wreaking chaos on the social fabric. When men make war, women become the collateral victims. Syrian women and girls are growing increasingly vulnerable to sexual exploitation as the war rages on, forcing them into exile or displacement. Once thriving communities become impoverished, and women are driven to prostitution, survival sex, teenage marriages, or, out of desperation, striking up sexual relationships with men who can provide rent or food. Sexual harassment is rampant. Even some aid workers have become sexual predators. Child marriages are increasing as young girls seek to escape poverty, or because their families believe it will protect teenagers from rape and sexual exploitation, only to find that the girls are ill-prepared for marriage, lack sexual education and often wed men much older than them. The greater the age difference, the more likely girls are to be disempowered and vulnerable to violence, abuse or exploitation, becoming victims of domestic violence and marital rape. Measures of the extent of sexual exploitation are difficult to access since women are reluctant to complain about abuse for fear of stigma and secondary abuse.

In the Central African Republic (CAR), displaced women escaping violence are at increased risk of rape, particularly in remote rural areas. Some are sold into sexual slavery, others forced into marriage. Gang rapes have become instruments of humiliation for individual women, and genocide of rival groups. Women are systematically raped based on their ethnic, racial or national bases during war. In the CAR, low literacy rates leave women particularly vulnerable to exploitation. Reconciliation efforts have been sporadic and have yet to address rape as a tool of genocide. Donor funding either targets broad initiatives to end the conflict, or are completely absent, leaving women at the bottom of the funding ladder.

Recently, after visiting CAR, former South African deputy president, Phumzile Mlambo-Ngcuka, now executive director of UN Women, appealed to the UN Security Council about the plight of women and girls. She urged the UNSC to ensure that gender issues were addressed from the outset in peacemaking and peacekeeping initiatives in CAR, and to elevate women’s participation and leadership in reconciliation efforts. She also called for an increase in medical and psycho-social support for internally displaced persons, particularly those who were victims of rape. Mlambo-Ngcuka described sexual violence against young women and girls in CAR as ‘violence [that] has taken place in house-to-house searches, unauthorized road blocks, military camps, and as part of sectarian violence’.

Peacekeeping troops deployed to conflict regions such as CAR have also been known to perpetrate sexual violence against women. The violation of a population by peacekeeping troops who are supposed to protect civilians is an ironical perversion.

In South Sudan, the hope of a peaceful new nation deteriorated despite international support and financial injections after independence. With the outbreak of internal conflict last year, there has been an alarming increase in reports of sexual violence along ethnic lines.

A few weeks ago, South Sudanese in the diaspora gathered in Washington DC to consider solutions to the impasse in that country’s political process. Interestingly, the case of the state of Western Bahr el Ghazal was put forward as a positive story on peacebuilding and peacekeeping, because this region had remained relatively peaceful, despite violence elsewhere in the country. This was attributed, in the meeting, to the leadership role of women in Western Bahr el Ghazal. The state finance minister, Lilian Riziq, noted that the state governor had two female advisors out of nine, fifteen women in the state assembly, and two female state ministers. She hailed the role of women in negotiations that led to the Comprehensive Peace Agreement in 2005, and subsequent peace-building initiatives. Women leaders, she said, were emerging at various levels of governance, and South Sudan should elect a woman president.

Like the South Sudanese, Palestinian women have been active participants in political struggle since the Balfour declaration of 1917. The General Union of Palestinian Women was established in the 1960s. Women later became more politicised during the height of the Arab nationalist movement, and during the first Palestinian intifada. Leila Khaled and Hanan Ashrawi became household names in Palestine and across the world. They continue to inspire the newer generation of women to lead in their struggle for justice.

As the Israeli onslaught on Gaza unfolded in the past weeks, we witnessed some of the gravest conflict-related atrocities. Women and children suffered the most horrendous effects of the bombing of Gaza. Shockingly, Israeli Knesset member Ayelet Shaked, from economics minister Naftali Bennett’s ultra-right Jewish Home party, called for murdering the mothers of Palestinian ‘terrorists’ so that they could not give birth to more ‘little snakes’. ‘They have to die and their houses should be demolished so that they cannot bear any more terrorists,’ she said. ‘They are all our enemies and their blood should be on our hands. This also applies to the mothers of the dead terrorists…[They] are all enemy combatants, and their blood shall be on all their heads. Now this also includes the mothers of the martyrs, who send them to hell with flowers and kisses. They should follow their sons, nothing would be more just. They should go, as should the physical homes in which they raised the snakes. Otherwise, more little snakes will be raised there.’

Mordechai Kedar, a lecturer on Arabic literature at Bar Ilan University, believes the sisters and mothers of Palestinian ‘terrorists’ should be raped. ‘The only thing that will deter them is if they know that either their sister or mother will be raped if they are caught. What can we do? This is the culture that we live in,’ he said.

Viewed through the Bosnian lens these openly racist and genocidal pronouncements echo the mass slaughter of non-Serbs. In the words of one Bosnian woman: ‘I do not fear the shells and bombs that may fall on my house. They do not ask for my name. I fear the foot soldiers who come to my house and kill and wound in a very personal way and commit atrocities in front of my children.’

Women in conflict zones are usually objectified and portrayed as vulnerable victims in need of rescue. Apart from the continued threat of gender-based violence, women’s voices calling for social, economic or political rights are silenced, especially when they have been displaced. Women assume greater responsibilities in times of conflict, especially as primary caregivers. Rather than these roles garnering respect, false patriarchal assertions, coupled with cultural stigmatism, relegate women to domestication with little regard to their abilities to meaningfully contribute to peacemaking and conflict transformation. Their resilience and resourcefulness in maintaining and sustaining their communities is underestimated, despite their natural leadership qualities. They are marginalised from key political negotiations and decision-making that has an impact on conflict transformation and reconciliation. The marginalisation is extended after the conflicts end, as the agendas are already determined during negotiations, from which women are often absent. Gender-based war crimes usually go unpunished or unaddressed in post-conflict reconciliation processes. Legal recourse takes ages to be obtained; war crimes often go unpunished and guilty parties refuse to sign the Rome Statute, thus rendering the International Criminal Court impotent, and delaying justice for victims.

Although these resolutions are hailed as ground-breaking, they fail to institute mechanisms of accountability and implementation, and have little or no impact on the ground. Women are still denied access to justice and protection from gender-based violence. The resolutions fail to institute mechanisms of accountability and implementation. In order to translate the decisions to workable solutions, the myth that women are uneducated and incapable of participating in international summits to resolve conflict must be debunked by women themselves. Apart from UN appointed gender investigators, who are supposed to be assigned to conflict zones, local women need to empower themselves and be empowered to address gender-based violence within social networks at grassroots level, both through psycho-social support, as well as improved healthcare. Sustainable funding must be dedicated to women’s development and special courts should be created to ensure legal recourse and justice. UN member states must be encouraged to introduce domestic laws that comply with these resolutions, and international monitoring instruments should be established to ensure compliance.

Last modified on Thursday, 19 February 2015 08:12
Tweet
More in this category: Brothers in arms? Hamas-Hizbullah reconciliation »
back to top