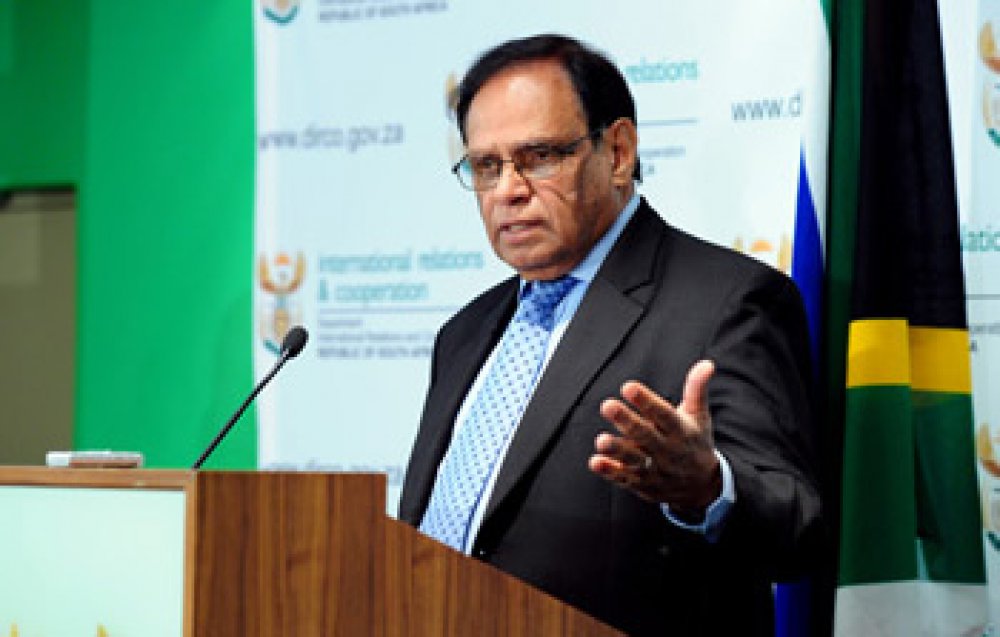 Developments in the Middle East-North Africa region have been dominating international discourse for some time and it is necessary that we as Africans have a clear understanding of the unfolding events and the implications thereof in order to respond appropriately.  This afternoon I had the privilege to interact with a few speakers who will participate later in this conference and it was most valuable to listen to their views and opinions.

Ladies and Gentlemen, like the rest of the international community, the South African Government is hugely concerned about the loss of life and the utter destruction of property that we are witnessing across the MENA region.  From our own history we know that oppressive action by governments will eventually spark discontentment and lead to unrest.  South Africa believes that sustainable peace can only be reached through inclusive dialogue and negotiations and not by force.

It is for this reason that South Africa's foreign policy calls for a commitment to peace, stability, socio-economic development and human rights. We wish to work with other African countries towards a peaceful Africa and with the rest of international community to contribute to global peace. With the recent election of Dr Dlamini Zuma as Chairperson of the AU Commission, Africa is now in a better position to play a more powerful role in this regard.

Although South Africa prefers that countries resolve their own problems and without interference from outside, there is often a need for the international community to play a meaningful role in an impartial manner when countries are unable to resolve their issues peacefully.  We must always assume a multilateral approach and avoid unilateral action by one or a few countries that have a vested interest in a particular unstable country.

Ladies and Gentlemen, the Arab Uprising and the consequences of hasty regime change left us with various challenges.  The question for South Africa and the continent is how to encourage the new North African governments to look southwards and reinforce an African identity. While Syria is destabilised, we have seen elections in Libya and Egypt and we have to focus on strengthening our engagement with these new governments, ensuring the sustainability of their political transitions and democracy and deepening linkages with the African Union and the continent.

It should also be mentioned that the destabilisation of Libya has further had a knock-on effect on the security of the entire Sahel region. The Arab Uprising has therefore precipitated the attention of the African Union beyond the Maghreb.

It is clear that the events of the Arab Uprisings are still unfolding across the region. Syria is in the throes of a civil war, and Yemen and Bahrain have been deeply affected. South Africa needs to ensure that it has a policy to adapt to any regime change in the region, especially if these changes are imposed by great or regional powers.

South Africa continues to explain its position of dialogue and African solutions to African problems as a sustainable solution to transitions. The West was caught by surprise by the Arab Uprisings but has reacted rapidly to cement economic relations with the new regimes. South Africa is trying to assist in reducing the dependency on the traditional powers and must facilitate economic engagement with the neighbours in the Maghreb and the rest of Africa in order to support the African agenda of regional integration.

Given our past experience in healing a divided nation through instruments such as the Truth and Reconciliation Commission, South Africa could play a critical role in sharing best practices for peaceful transitions and constitution drafting in the MENA region.  Furthermore, our country is well suited to serve as best practice to Fatah and Hamas for reconciliation and nation-building. It is clear that the current developments in the Arab world also have a bearing on the future of the Israeli-Palestinian conflict and the broader Arab-Israeli conflict. We must not lose sight of the broader regional question to which Palestine is inextricably linked.

The "Arab Uprisings" and the events that have now unfolded across the MENA region caught the world largely unaware. South Africa, the African Union as well as the rest of the world have been dealing with the rapid changes and developments in a reactive fashion. This conference and similar academic discussions could assist us in formulating a more proactive approach to the region.

I am confident that the contributions of the high caliber speakers and participants in this conference would lead to a better understanding of the transformation process in the MENA region and its impact on the African continent, but also on South Africa in particular.

I therefore congratulate the Afro Middle East Centre for arranging this very important event and wish you fruitful deliberations as we grapple with the challenge of bringing lasting peace to a volatile region.

Last modified on Thursday, 19 February 2015 08:28
Tweet
More in this category: Uprising in Middle East: Making a new world possible? »
back to top