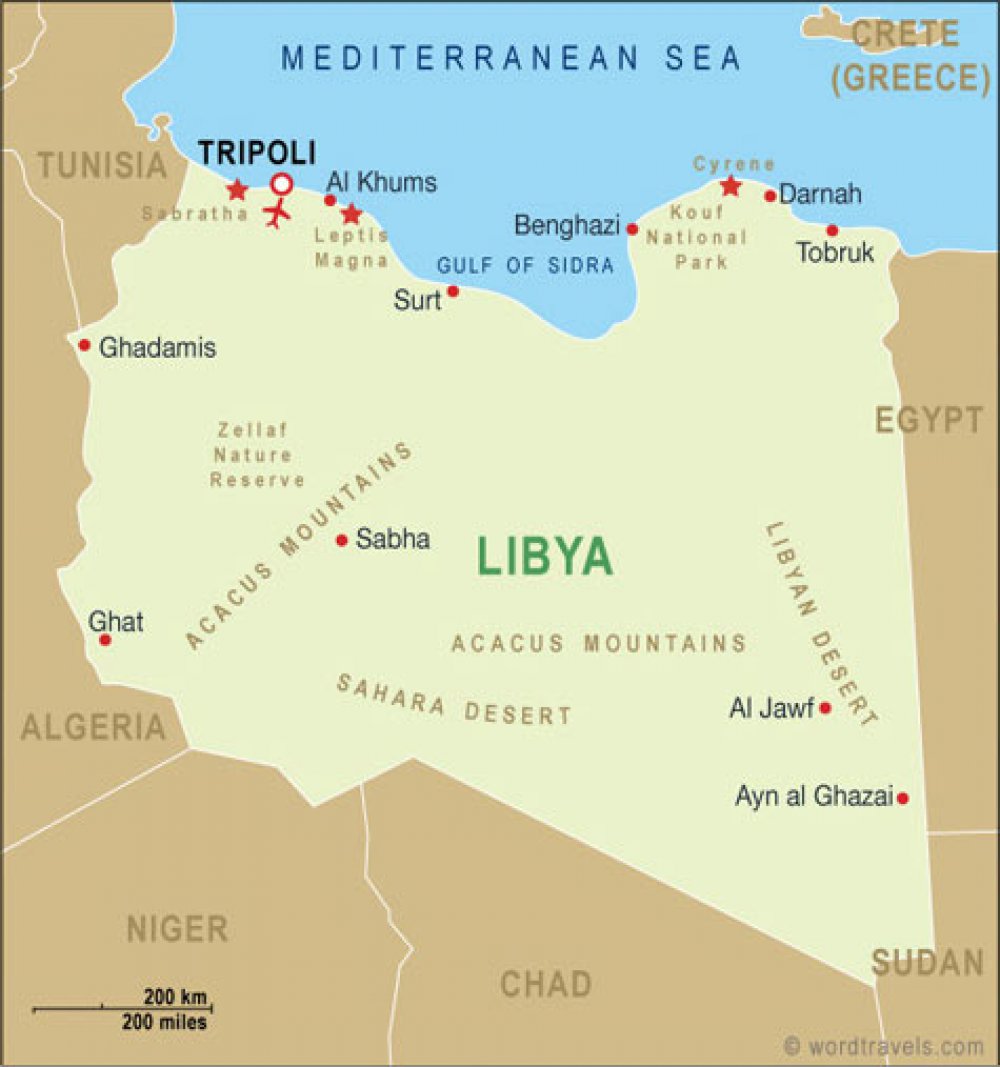 For centuries, tribes have played a key role in terms of politics and social relations within Libya, and have ensured their perpetuation through the Bedouin customs of farming and caravan trading, as well as through the social solidarity which binds together the different members of a tribe.

Libyan tribes played an important role in the fight against the Ottoman Empire, as well as against Italian colonisation from 1912 to 1943. In spite of that, the importance of the tribal system faded under Colonel Muammar Gaddafi's rule after he seized power in 1969. Undoubtedly, Libya's modernisation, the building of new cities across the country, and the introduction of new systems of education represented factors which cumulatively caused people to abandon their tribal localities and to distance themselves from some manifestations of the tribal affiliation under which they had grown up. All this ultimately resulted in the foundations of the traditional tribal system being destabilised.

Nevertheless, despite some reports which allege a gradual disappearance of the tribal system, numerous Libyans still identify themselves in terms of their tribal affiliation. In fact, tribal influence increasingly played a role from the 1970s, especially because tribal affiliation facilitated the attainment of jobs and career advancement. Additionally, while Gaddafi attempted to reduce the influence of the tribal system - and even to eradicate it altogether - he occasionally went to great lengths to entrench it firmly. Indeed, he relied increasingly on the tribal system to consolidate his authoritarian rule, while simultaneously diminishing the power of several tribes by granting economic privileges, establishing alliances based on marital ties, and even, at times, by threatening punishment. Gaddafi also endeavoured to preserve the balance of power between the different tribes within his own government and the various state institutions.

It is clear that certain tribes enjoyed greater influence within the army than others, within the framework of Gaddafi's 'divide and rule' policy. Gaddafi, from the Qadhadhfah tribe, surrounded himself with members of his tribe, and deployed them to the most sensitive posts. The rationale was that he wanted to ensure his own safety and the safety of his government. This discriminating policy led to tribal tension, and competition within the army, particularly on the part of the Maqariha tribe. The tension reached such intensity that some political experts and analysts speculated that the Maqariha would be the ideal candidate to stage an uprising against Gaddafi because a large number of its members occupied important positions in government and the security apparatus.

It is clear that Gaddafi used the tribal system to implement a stick-and-carrot policy. Tribes that were loyal to him benefited from material privileges, while chastisement was the lot of opposing tribes. This policy led to the emergence of a culture of patronage which the tribes reproduced. Faithful generals would benefit from material privileges, and attain high social standing through elders of the tribes. Gaddafi lavished wealth, prestige, and employment opportunities on the tribes, and strengthened blood relations through tribal intermarriages. Thus, many Libyans found themselves reliant on tribal connections to exercise their rights, attain protection, or even to secure positions for themselves within state institutions. On the other hand, tribal opposition was met with severe repression. In March 1997, the Libyan parliament passed a 'code of honour' which enabled the imposition of collective punishment against tribes and clans - usually through the withdrawal of government services - whenever they engaged in activities against the regime.

Libyan historian Faraj Abd al-Aziz Najm listed about 140 influential tribes and clans in Libya. However, he argued, only thirty tribes exercise genuine and visible influence. Other analysts identified only twenty tribes as wielding socio-political authority. Among the 140 tribes, there are some whose influence extends beyond Libya's national borders into the entire region stretching from Tunisia to Egypt, and even as far as Chad.

According to a study by Dr. Amal Obaidi - from Garyounis University in Benghazi, the largest and most influential tribes in Libya are the tribe of Banu Salim (in Cyrenaica) and the tribe of Banu Hilal (in western Libya). In the north-west of Libya, in the Tripoli region, the most important tribes are the Warfalla and Tarhunah, while in the region of Cyrenaica the important tribes include the Kargala, Tawajeer and Ramla. As for Gaddafi's own tribe, it was originally small and insignificant; prior, that is, to his ascension to power in 1969. It then gained a more influential role.

The most marginalised tribes are found in the eastern part of Libya, where the most important oil resources are located, and where political authority passed quickly out of Gaddafi's hands in the recent uprising. Indeed, the eastern part of Libya was the very first area to proclaim the revolution, and where members of the Libyan security apparatus openly waved the symbols of political opposition early on. Their first criticism of Gaddafi was the partisanship that he had displayed, over years, towards the tribes in the Tripoli region, to the detriment of the eastern tribes.

The Maqariha tribe is regarded as being most closely associated with Gaddafi's native region, yet it has as yet to take a decisive stance vis-à-vis the current uprising. This tribe is encumbered by a heavy debt it owes Gaddafi and the regime. The reason for the debt is that Gaddafi had granted the Maqariha his assurance that he would ensure the return of Abdel Baset al-Megrahi, who had been serving a jail sentence in Britain after his conviction in the case of the Lockerbie bombing. Gaddafi did deliver on that promise. However, it has become evident that some signs of opposition are manifesting within the Maqariha tribe, especially in the eastern and southern areas of Libya. Since many members of this tribe occupy key positions in government and in the security bodies, it is quite likely that they can play a crucial role in the overthrow of Gaddafi.

On 20 February 2011, the spokesperson of the Zawiya tribe, Sheikh Faraj al-Zawi, applied pressure on the government by threatening to interrupt oil exports if Gaddafi refused to halt the violent repression of the citizens.

The regime currently faces a thorny and problematic scenario: one after the other, the most powerful Libyan tribes disassociated themselves from Gaddafi within a few days. One of these is the Warfalla, which is among the largest tribes in Libya, with about one million members. It was one of the first tribes to express its dissatisfaction, and openly voice its opposition of Gaddafi through its spokesperson Akram al-Warfalli.

Notwithstanding Gaddafi's claims and defiance, he must be feeling uneasy. The fact that the leaders of the major tribes have abandoned Gaddafi will definitely have a debilitating effect on the morale of the Libyan regime. It will also contribute to shattering its perceived legitimacy. That, in turn, will occasion more splits. In addition, Gaddafi has begun to lose his grip over the tribes both in terms of the economic power he had wielded (the Zawiya tribe withdrew its allegiance to him) and his political authority (given that the Warfalla tribe had previously lent legitimacy to his hegemony).

After years of Gaddafi's despotic control over the tribes, it appears as if he is losing his power over them. The security services (both police and intelligence) had been monopolised by Gaddafi's tribe through an alliance with the tribes of Maqariha and Warfalla, whose members occupied high-ranking positions in these bodies. This had guaranteed Gaddafi full hegemony over Libya. It was thus not expected that the Warfalla would withdraw from this alliance. Nevertheless, this tribe objected to the brutal treatment meted out to the opposition during the current uprising. It is thus possible that Warfalla, along with the Maqariha, will play a major and decisive role in the current Libyan crisis.

We must not overlook the issue of tribal loyalty when discussing the future of the Libyan regime. Gaddafi's strategy for preserving his political authority had rested on weakening the army, disabling it from taking any action against him, while, simultaneously, strengthening the militias which had sworn loyalty to his regime, and attracting the tribes by utilising Libya's massive oil and gas wealth.

Both in Tunisia and Egypt, military elites played an essential role during the latest uprisings. It was also the military elites that steered the course of the revolutions in both countries. That scenario, however, will not be duplicated in Libya, because the underlying tribal structure, in spite of the diminution of its authority over the past generations, will influence the course of events or impose a new balance of power in the country.

Despite Gaddafi's continuous threats to cause carnage among the people opposing him, and even if the international community allows him to continue killing demonstrators, it is unlikely that a civil war between tribes will erupt in the country. It seems that the fear of the outbreak of an inter-tribal conflict is no more than the propagandistic claims circulated by the regime. What we are presently seeing in Libya bears closer resemblance to tribal unification in the face of the regime rather than to a schismatic split between tribes.

Therefore, we can assume that the army and the Libyan opposition (both inside and outside the country), along with the Islamists, will play a part in the near future that will be quite apart from the diverse tribal affiliation of any individual. However, although some experts prefer to play down the significance of tribal groupings, by highlighting their frail organisational structure and the restricted role they have in public affairs, the truth is that the Libyan tribes will be powerfully represented in an opposition government. Muhammad al-Zawi, the former Libyan ambassador to Britain, and a leader of the opposition, has already succeeded in gathering around him the different competing groups, along with all the Libyan tribes, and engaging them in negotiations, to bring them on board of a participatory project to create the new Libya. Through someone that they trust, and who enjoys the support of the outside world (the United Nations, the Arab League, the African Union, the European Union, and the United States), the Libyan tribes and the leaders of the opposition in Libya will be able to join forces.

Regardless of what results from the current predicament, Libyan institutions will have to take into account that fifteen percent of the country's inhabitants do not belong to any tribe, and that their ancestral origins are traced to other ethnic communities (mostly Berbers and Turks).

* Mansouria Mokhefi is a research fellow and head of the Middle East / North Africa Programme at the Institut français des relations internationales, Paris

Last modified on Thursday, 19 February 2015 15:57
Tweet
More in this category: The rights of refugees: Continued humanitarian violations in Libya »
back to top