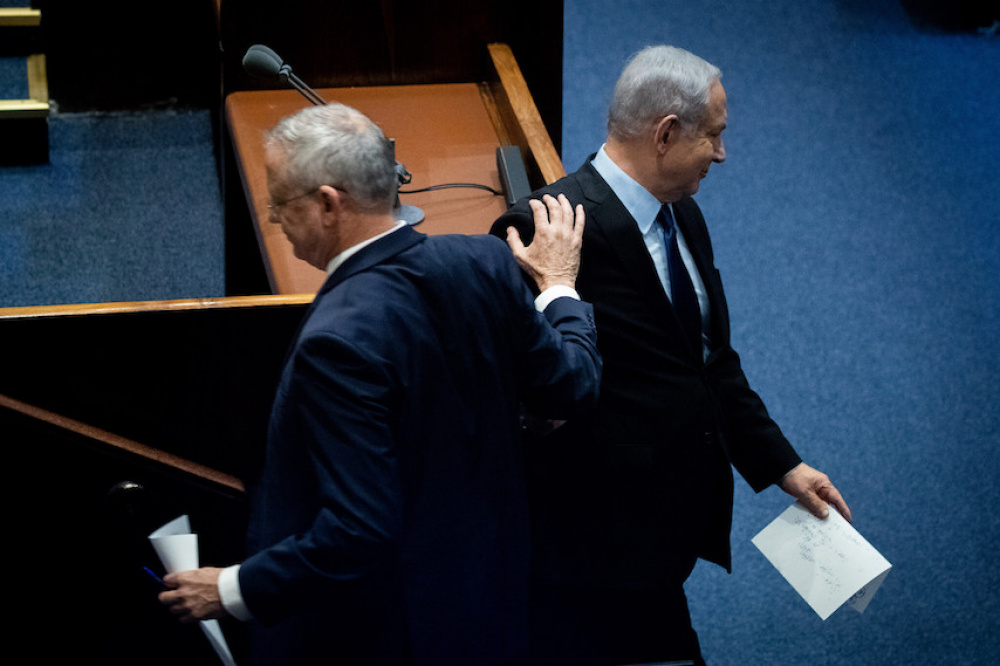 When the Israeli Parliament dissolved itself in December 2018 and scheduled elections for April 2019, no one expected that it would take a full year to form a new coalition government. But it is only now that such a government is coming into being, based on an agreement between the right-wing Likud headed by Prime Minister Netanyahu, which has been in power since 2009, and the new centre-right Blue-White party headed by General Benny Gantz, a newcomer to the political scene. Signed on 20 April 2020, the agreement was ratified by Israel’s parliament, the Knesset, in the first week of May, after Israel’s supreme court ruled against challenges to the deal.

This development came after three rounds of elections in less than a year, which reflected the same balance of forces that made the formation of a stable coalition impossible. Although right-wing Jewish nationalist and religious parties gained a majority each time (65 out of 120 seats in April 2019, 63 seats in September 2019, and 65 again in March 2020), the Israel Beitenu hard-right secular party led by Avigdor Lieberman refused to join Likud and its partners, thus depriving them of a majority. The deadlock was finally broken when Gantz made a deal with Netanyahu to form a government, in which the prime minister will retain his post for eighteen months while Gantz acts as his deputy, after which they will switch roles. All other positions will equally be divided between the two sides.

Even before it was finalised, the agreement caused a split in the ranks of Blue-White: half of its Knesse representatives joined Gantz, while the others vowed to remain in opposition. The rationale for forming Blue-White as a broad centrist front in the run-up to the April 2019 elections was the need to pose a viable alternative to Netanyahu, seen as a corrupt and unreliable leader. The total rejection of Netanyahu was the glue holding its different components together. Ditching that goal was a betrayal of the core promise to its voters. We can safely set aside the official excuse for the move – that the coronavirus crisis created an urgent need for national unity – because nothing in the agreement is relevant to health policy. Much of it, in fact, is devoted to entrenching Netanyahu’s control over the judicial system and protecting his family’s access to state benefits.

How can we make sense of this development and its implications? To answer that question, we must go beyond party-political considerations that occupy the media and much public opinion and look at a crucial background factor: Israel’s self-definition as a ‘Jewish state’ and the role of Palestinian citizens in its political system.

A key feature of the last two electoral rounds was that the anti-Netanyahu bloc won a majority and yet could not form a government. Beyond agreeing on the need to get rid of Netanyahu, due to his personal failings and corruption charges, there were no common positions unifying the bloc. Getting Lieberman to work with the Palestinian-led Joint List proved impossible, and Blue-White too included factions opposed to such cooperation. Many who were appalled by Netanyahu’s fraudulent behaviour and unrestrained greed and lust for power had no problems with his party. Their preference was to work with a Likud led by someone else, not to make radical changes to Israel’s ethnocratic regime. The imperative of removing Netanyahu from office was never strong enough to allow new alliances that would contest the boundaries between adherents of Israel as a ‘Jewish Democratic State’ and those challenging that principle.

As things now stand, the coalition will include Likud, the religious parties, Blue-White and the Labour Party, once the central pillar of the Israeli state but now reduced to two Knesset members (MKs) attached to Gantz’s bloc. The opposition is divided between those who oppose Netanyahu personally, but have no problem working with Likud (just over 20 MKs), and those who offer a principled challenge to policies pursued by Israel over the last decades. The latter group includes representatives of liberal Zionism (four MKs), and the Joint List (15 MKs), the only force independent of Israel’s political-military establishment.

Formed in 2015 as a united front of Palestinian citizens, the Joint List extended its dominant position among them (gaining 85-90 per cent of their votes). Suffering a dip in April 2019 due to internal bickering, it regained support in subsequent rounds. Unity in the face of exclusionary state policies is a stance clearly valued by the constituency of the Joint List, but internal unity need not come at the expense of external cooperation. Following the March 2020 elections, the party expressed its willingness to work with all parties that offered an alternative to Likud, even if only on a limited basis. Nothing emerged from that, due to Gantz’s fear of being accused of collaboration with ‘terrorist supporters’. He was worried that without a Jewish majority any government he might form would not be seen as legitimate by Jewish Israelis. A mere majority in Parliament was not enough for those operating within the framework of Jewish ethnocracy. Still, the move signified an important reaching out by the Joint List to the Jewish mainstream, without relinquishing its independence.

As the only major force offering resolute opposition, not just to Likud but to the entire course of ethnocratic policies since 1967, if not 1948, the Joint List is at the core of any progressive alternative to existing relations of domination. However, its growth potential is constrained by its rootedness in a specific constituency – Palestinian citizens of Israel, who are a minority in relation both to the majority-Jewish Israeli population and to the majority non-citizen Palestinian population. To overcome this limitation, it needs to form tighter links with progressive Israeli-Jewish activists and movements, as well as Palestinian movements operating outside the boundaries of Israeli citizenship. Such an expansion may push it in opposite directions, a dilemma that is likely to occupy it in coming years.

One option would be to strengthen its appeal to liberal-left Jews who may adhere to Zionism as an ideology but are open to moving beyond it in practical matters: putting an end to the occupation, reversing settlement activities, extending rights to Palestinian citizens, and so on. The past year saw the electoral fortunes of this group rapidly dwindling (with less than six per cent of the vote in 2020) with little prospect of revival. But we must keep in mind that only five years ago, close to a million Israelis (23 per cent of the vote) voted for parties criticising, to varying degrees, Likud’s hard-right policies. Many of them shifted to Blue-White in order to topple Netanyahu, but they did not disappear as a potentially-progressive constituency. Of course, most of them are far from breaking with mainstream Zionist policies, but a useful long-term strategy could engage them in joint initiatives on shared practical concerns.

What can we expect from the new government? It has not yet come up with concrete plans, with one crucial exception: from 1 July 2020, Netanyahu will be able to submit an agreement reached with the Trump administration for extending Israeli sovereignty over the West Bank – in other words, its annexation to Israel – to his cabinet or to the Knesset. Needless to say, Palestinian or other Arab and international agreement with that development is neither required nor desired by Netanyahu. As far as he is concerned, it is a matter that involves only the USA and Israel.

The implications of such annexation require a longer discussion than can be offered here. But briefly: a formal move from military rule to civilian control over the West Bank would mean a radical change in the legal status of the occupation, and transition into a full-fledged apartheid system, not just de facto (as has been the case for decades) but de jure as well. This will present new problems for Israel. Even if support by the Trump administration were guaranteed, the US president may not remain in office for a second term. In any event, the USA alone cannot re-create international law. Resistance by local Palestinians and neighbouring countries is likely to intensify, and global condemnation will follow. For all these reasons, Netanyahu may well prefer not to make that move, and retain the option as a threat for the future. In all likelihood, the picture will become clearer in the next couple of months.

* Rand Greenstein is an associate professor in the Department of Sociology, University of the Witwatersrand