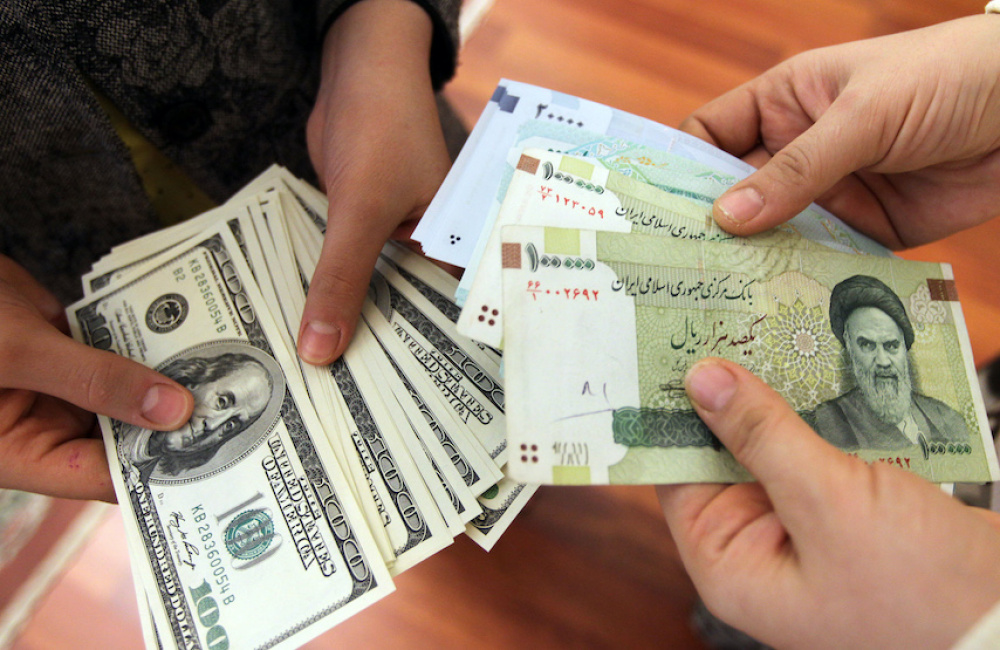 When US president, Donald Trump, announced his latest threats against Iran on Rush Limbaugh’s show last week, it was unclear whether he or his steroids were talking. Even this president rarely uses language like, ‘If you f**k around with us, if you do something bad to us, we are going to do things to you that have never been done before’ in announcing foreign policy.

The possibility of an ‘October Surprise’ looms over every US presidential election. This year, twenty-some days from the election they’re likely to lose, with more than 215 000 people across the United States dead from the pandemic, the White House transformed into the latest coronavirus hot spot, the economy still in free-fall, and the commander-in-chief high on drugs, the Trump administration’s latest harsh new sanctions on Iran do not look surprising at all. The political use of the term October Surprise, after all, started with the Iran hostage crisis of 1980.

But this not-so-shocking surprise is actually incredibly dangerous and reckless for the future, and incredibly cruel and heartless – even sadistic – right now. The new economic sanctions will shut down the last eighteen Iranian banks still able to finance the import of desperately-needed humanitarian goods, including medicine desperately needed during the Covid-19 crisis, and even basic foodstuffs. Earlier US sanctions had already brought massive suffering to Iranians. At the beginning of April, as the pandemic was at its height, Democratic Senator Chris Murphy acknowledged that ‘U.S. sanctions are stopping medical equipment from being sent to Iran. As a result, innocent people are dying.’

The White House claims this latest escalation of its ‘maximum economic pressure’ sanctions campaign will force Iran to the negotiating table. But years of punishing the entire population of 80 million Iranians has shown that this is almost certain to fail to achieve stated US goals, and even if it succeeded, the human price paid in hunger, lack of medicine during a raging pandemic, and the death of children and other vulnerable people is simply far too high.

During an earlier sanctions campaign against Iran, Democratic congressperson Brad Sherman blithely noted that ‘critics also argued that these measures will hurt the Iranian people. Quite frankly, we need to do just that.’ Sherman, who is now running to chair the House Foreign Affairs Committee, had the audacity to compare Washington’s brutal sanctions against Iran to the global movement against apartheid South Africa in the 1980s. In so doing, Sherman deliberately ignored a critical distinction: the vast majority of South Africans supported anti-apartheid organisations that called on the world to impose sanctions, accepting the consequences, and linking those external sanctions to their broader national strategy for liberation and freedom. In Iran, people and organisations fighting to broaden democratic rights are calling desperately for an end to sanctions – because the sanctions are killing them.

This newest punishment on Iranians will exacerbate the devastating impact of the broader sanctions regime the USA has imposed on Iran for years. While the State Department brags that it ‘continues to stand with the Iranian people’ and that ‘exceptions for humanitarian exports to Iran…remain in full force’, the reality is that existing economic sanctions, despite those exceptions, have destroyed Iran’s economy and the lives of most of the 80 million Iranians, especially the poorest and most vulnerable among them.

The latest escalations in broad US sanctions against Iran began with Trump’s withdrawal from the 2015 Joint Comprehensive Plan of Action (JCPOA), or Iran Nuclear Deal. Despite virtually unanimous international and US intelligence agreement that the JCPOA was working (Iran was not building nuclear weapons), and UN inspectors remained on the ground in Iran, and despite UN sanctions being stopped, Trump made it clear that abandoning ‘Obama’s deal’ was top of his agenda. In May 2018 he pulled out of the deal and imposed a host of new crippling and unilateral sanctions against Iran.

Other signatories to the JCPOA – Germany, France, Britain, China, Russia, and the European Union – all opposed the US withdrawal, as did the UN Security Council, which had endorsed the deal and established a monitoring agency to guarantee its implementation. The biggest US demand that the UNSC had accepted was what became known as ‘snap-back’, by which any signatory could report an Iranian violation, and if confirmed by UN monitors, the UN sanctions that had been lifted would automatically be restored. With the USA having abandoned the deal, and US sanctions rapidly escalating, European countries made some efforts to protect Iran from the impact of the new sanctions, but largely failed. Iran eventually responded by taking some calibrated steps in nuclear power enrichment beyond what was permitted in the JCPOA.

In early August, Washington tried to convince the UNSC to extend some conventional arms’ restrictions on Iran that were set to expire. These restrictions had nothing to do with nuclear weapons, and the rest of the UNSC (with the exception of USA-dependent Dominican Republic) unanimously refused. A week later, in an effort to escalate ‘maximum pressure’ on Iran even further, Secretary of State Mike Pompeo announced he was invoking the ‘snap-back’ procedure, and demanded the restoration of UN sanctions against Iran. The rest of the Security Council (except the Dominican Republic) made it clear that since the USA had renounced the agreement, it no longer had standing to make such a demand. Pompeo’s response was that since the USA had originally signed the treaty, Washington still had all the rights of signatories, despite having officially withdrawn and thus ending all its obligations. He then simply announced that UN sanctions were back in force, though no other state agreed.

Then came the latest US sanctions. Along with new suffering for the Iranian people, the danger could quickly escalate if, for example, the USA decided to forcibly board and ‘inspect’ a ship that it might claim was carrying goods to or from Iran. If Iran were to resist, a serious military conflict could erupt. This threat of a deliberate US provocation, aimed at forcing Iran to respond militarily and giving hawks in Washington an excuse to use greater military force in time for pre-election boasting by Trump, could shape an incredibly dire and dangerous October surprise. Iran has not taken Washington’s bait, reacting instead to US provocations – including the assassination of powerful Iranian political and military leader General Qasem Soleimani in January – with significant caution. But Iran has its own elections scheduled in June, and there is growing pressure on the leadership for more decisive action.

Iran may also be holding back in anticipation of a change in the White House. Democratic Party presidential contender Joe Biden has not called for ending sanctions on Iran, but has made clear that he would: ‘offer Tehran a credible path back to diplomacy’, return to the JCPOA, end the Muslim ban on entry to the USA, and work to end the Yemen war. While his position is not nearly as strong as it needs to be to end the assault on ordinary Iranians’ lives, there is no question that it challenges some of the worst aspects of existing policy. This should not be surprising; the JCPOA represented the high point of Obama’s foreign policy achievements, and since Biden’s credibility is fundamentally bound up with Obama’s legacy, he needs to maintain the commitment to the JCPOA and the diplomacy-over-war framework that enabled it. It is public knowledge that pressure on Trump to impose new and ever-more-damaging sanctions on Iran come from Israel and the far-right Foundation for Defense of Democracies in Washington. Just a couple of weeks before the newest sanctions were announced, the FDD head co-authored a Wall Street Journal op-ed calling for a ‘12th-round economic knockout’ in the form of a Trump move to ‘[b]lacklist the entire Iranian financial industry’.

So, beyond the expectation of a last-minute electoral bump (which is not a sure thing, given significant public opposition to wars in the Middle East), what is the US goal in provoking a military clash with Iran that could quickly escalate out of control?

In the Trump era, clear strategy is generally outside the realm of possibility. But immediate goals can sometimes be discerned. From the beginning, the Trump administration – mainly in the person of Trump’s son-in-law Jared Kushner – has focused on building a US-backed regional anti-Iran alliance with Israel and key Arab allies Saudi Arabia, the UAE, and others. Much of that is underway, bolstered most recently by the USA-orchestrated agreements between Israel and both the UAE and Bahrain, with the blessing of Saudi Arabia. Those agreements, while leaving out any reference to ending Israel’s oppression, occupation and colonisation of Palestinians, are primarily aimed at increasing US arms sales to its Arab allies, and going public with the longstanding but formerly more-or-less hidden trade, commercial and security ties between Israel and the Gulf monarchies.

Preventing Iran from obtaining nuclear weapons certainly remains a longstanding US goal. Part of that is rooted in the US determination to prevent further nuclear weapons proliferation in the world. However, much of it is based on a US commitment to Israel to maintain Tel Aviv’s nuclear weapons monopoly in the region; it is Israel’s Dimona nuclear plant that houses the Middle East’s only nuclear weapons arsenal. On the other hand, US intelligence agencies have for years agreed that Iran did not have a nuclear bomb, was not building a nuclear bomb, and had not even decided it wanted to build a nuclear bomb. Under the JCPOA, Iran’s nuclear capacity and its ability to obtain nuclear components anywhere else were extremely limited, and UN nuclear inspectors were on the ground. That remains the case, but could change if US ‘maximum pressure’ continues to prevent Iran’s access to international trade, purchases of food and medicine, and so forth.

Maintaining Iran’s role as enemy makes it easier for the USA to justify ever-more-massive arms sales to repressive authoritarian kingdoms, and the ten-year $38 billion gift to the Israeli military. For the preposterously wealthy but strategically dependent Gulf states, the real fears of Iranian influence (on Shi’a populations in their countries, competition for oilfields and pipeline routes, etc.) are matched or even outstripped by the value of Iran-as-bogeyman to ensure continuing US strategic support and protection.

Reports have been floating around that Washington may close the giant US embassy in Baghdad, and pull out diplomatic and other non-military personnel. That may be in anticipation of a future Iranian response to continuing US escalation – perhaps something like a US military attack on the Iraqi Popular Mobilization Forces – that could lead to Iranian retaliation against US military forces in Iraq. With Israeli backing, a strike against Iranian interests by some combination of the UAE, Bahrain and/or Saudi Arabia, even without direct US participation, cannot be completely ruled out. Under such circumstances, it is not impossible that public pressure could lead the Iranian regime to make different and much more dangerous choices.

US escalations may not be over yet. There are several more weeks of October for new surprises.

* Phyllis Bennis is an advisory board member of the Afro-Middle East Centre. She is also a fellow of the Institute for Policy Studies. Her most recent book is the seventh edition of Understanding the Palestinian-Israeli Conflict: A Primer.

** This article was first published online by Common Dreams