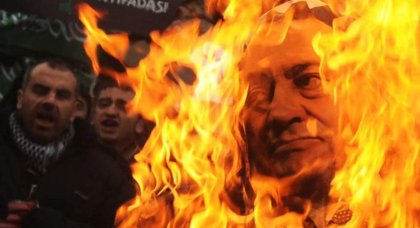 Protests by Egypt’s main journalist syndicate and Egyptians previously loyal to the military regime point to increasing opposition to President Abdel-Fattah el-Sisi and his regime, and to their inability or unwillingness to scale down their repression of citizens.

The most recent protests were sparked by the police’s storming of the journalist syndicate’s Cairo headquarters and the arrest of journalists Amr Badr and Mahmoud el-Sakka. They were accused of inciting protests against Sisi’s April 2016 decision to hand over the islands of Sanafir and Tiran to Saudi Arabia. The decision was widely criticised by Egypt’s elite and media. Ironically, one of the ‘reasons’ cited for the military coup against former president Mohamed Morsi was the (false) claim that he intended transferring control of North Sinai to the Palestinian resistance group Hamas. Badr and el-Sakka had opposed the unpopular island transfer, which saw thousands protesting and 1 200 arrested. Over 150 protesters were subsequently sentenced to between two- and five-year prison terms for the protests, which violated the November 2013 protest law adopted to quell dissent after Morsi’s ouster. Even former Sisi supporters, including Popular Current Party’s Hamdeen Sabahi, challenged the island decision in court, and it is likely that opposition will increase further if parliament ratifies the handover.

The May protests follow a pattern of increasing dissatisfaction with Sisi’s policies, which have failed to stimulate an economy that contracted in 2015. Inflation currently stands at eleven per cent, and the much- touted eight billion dollar Suez Canal expansion project only marginally increased government revenue, owing to the global economic slowdown and drop in oil prices. Shortages of cooking gas and electricity continue, and the drop in foreign reserves has caused the government to tighten exchange controls, especially since Gulf aid has diminished following the accession to power of King Salman in Saudi Arabia. Further, the military has aggressively increased its already numerous activities in Egypt’s economy, thus competing with private business. Egypt’s elite has been impacted, and Sisi has come under increasing criticism from private media outlets and commentators. His popularity has decreased drastically.

The protests have been endorsed by over 3 000 members of Egypt’s 8 000-member journalist syndicate, including editors of most major private and even state-owned media outlets. Supported by the previously apolitical doctors’ syndicate, which opposes the interior ministry’s treatment of doctors, protesters have demanded the removal of the country’s interior minister, Magdy Abdel Ghaffar. The syndicate has refused to publish the minister’s name until an apology from Sisi is received, and has vowed to escalate actions into a full-blown strike in the coming weeks.

Traditional opposition parties such as the Muslim Brotherhood and activist youth groups such as the April 6 Youth Movement have added their voices, and for the first time since seizing power, Sisi faces a backlash from most major Egyptian constituencies. Prior to the large 15 and 25 April protests, the frequency of and attendance at anti-regime protests had been waning when compared to late 2013; however, the island transfer has galvanised many Egyptians. It seems even some officials in the interior ministry are sympathetic, and memos alluding to methods of regime discourse manipulation and instructions on constraining protests have been leaked. Much of the media had previously supported the regime, and endorsed Sisi’s crackdown on the Brotherhood, enabling him to control public discourse and silence opposition figures.

The regime responded by increasing its crackdown on opposition figures, including journalists, insisting in one leaked memo, that it ‘cannot retreat from this position now; a retreat would mean a mistake was made, and if there was a mistake who is responsible and who is to be held to account?’ Sisi has, in recent months. sought to silence opposition even from the supportive elite, insisting that it threatened the country’s stability. He even implored Egyptians in one speech to listen only to him.

In January 2016, the Al-Nadeem Centre for Rehabilitation of Victims of Violence in Cairo reported ‘195 deaths, 42 cases of torture, including eight people who were tortured to death, 60 cases of medical neglect, 20 cases of group violence by the police, and 66 forced disappearances, while 32 people were reported to have reappeared in various places of detention, in some cases months after they had vanished.’ Authorities subsequently shut down Al-Nadeem in February. It is noteworthy that the sentences issued to recent protesters are less punitive than those issued to people believed to be close to the banned Brotherhood. Six people, including three journalists (two from Al Jazeera) were sentenced to death on 7 May, accused of ‘leaking information to Qatar’.

Although opposition to the regime has increased, the regime remains unthreatened in the short term, especially since many Egyptians are content with the ‘stability’ Sisi’s rule brings. Moreover, the internal opposition is too fragmented, and the regime crackdown too heavy-handed to allow for the formation of a unified and coordinated stance. Moreover, many from within the Egyptian left and secularists are still prejudiced against the role of Islamists, specifically the Brotherhood, in a new dispensation, and are likely to advocate reform rather than revolution. The protests do, however, illustrate that Egyptians’ aspirations and expectations have grown since Mubarak’s overthrow, and that if Sisi’s policies to stimulate the economy continue to fail, Egyptians are unlikely to allow him the same amount of leeway as was afforded Mubarak, especially since the regime no longer operates from behind a liberal veneer.