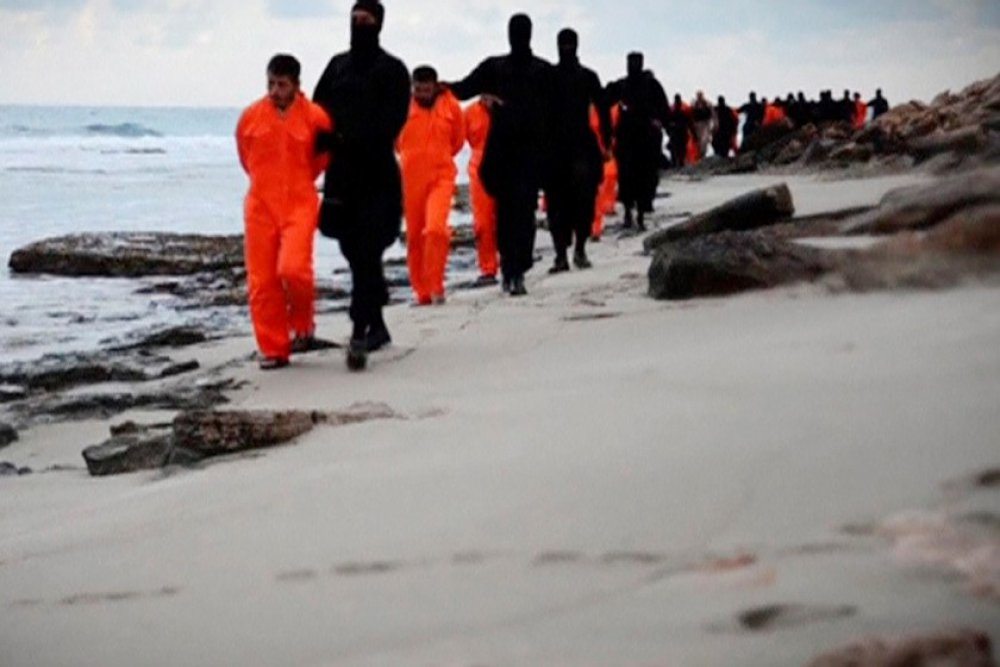 On 15 February 2015, an armed group calling itself the Tripoli Province of the Islamic State and claiming affiliation with the Islamic State group in Iraq (IS) posted a video on the internet of what looked like the execution of twenty-one Egyptian Copts. The incident likely occurred on the beach of the city of Sirte. That evening, the Egyptian president, Abdel Fattah al-Sisi, delivered a hasty speech condemning the incident and warning that Egypt had the right to respond. He convened a late night meeting of Egypt’s Supreme Defence Council. The next four Egyptian Air Force fighter jets twice bombed targets in Darna (instead of Sirte), claiming Darna was controlled by IS.

The raids followed a massive inflammatory media campaign by regime-supporting Egyptian media, and ignited controversy in various quarters. Many people questioned whether Sisi would use the incident to justify a large-scale military intervention in Libya, thus militarily involving Egypt on the side of its allies in the Tobruk government and forces loyal to the renegade colonel, Khalifa Haftar.

Libya is host to a large Egyptian community of workers, which was threatened after Sisi expressed support for the Tobruk government and for Haftar. After the Coptic Church became a strong supporter of the Egyptian regime, there have been kidnappings and murders of Egyptians, especially Copts, in Libya. The people supposedly executed by the Sirte militants in February were kidnapped two months earlier, but there is no evidence that Egyptian authorities had exerted concerted efforts to communicate with the kidnappers and ascertain their demands, or to try to secure the lives of the abductees. It is also difficult to ascertain whether all those in the video were Egyptians and Copts.

The video greatly embarrassed the Egyptian regime, both because it had done so little over the past two months to secure the release of the abductees, and because the event targeted Egyptian Copts at a time when the Egyptian Church had become the strongest supporter of the Egyptian coup regime. More importantly, the video was posted when the regime was embroiled in crises and amid waning political support from sectors that had initially welcomed it. The deepening economic crisis and leaked recordings from Sisi’s office have negatively impacted his public image and his relations with allies in the Gulf Cooperation Council (GCC). Thus there had to be a response to the Sirte incident, to prevent a heavy political cost for Sisi. Hence the rapid retaliation, within a few hours of the Supreme Defence Council’s meeting ending.

However, the retaliatory raids did not target the Tripoli Province group in Sirte, on Libya’s west coast. Rather, they struck at targets in Darna, east of Benghazi, that cannot easily be identified as being under the group’s jurisdiction. A group called Ansar al-Shari'ah exists in Darna, but there is ambiguity about whether it has pledged allegiance to IS or to al-Qaeda. Ansar al-Shari'ah is part of the Darna Mujahideen Shura Council, and is loyal to the General National Congress, the Tripoli Transitional Government and the Fajr Libya (Libya Dawn) command. Little is known about the Tripoli Province which surprisingly and suddenly emerged in Sirte. It is unclear whether the group consists of Libyans only, or if it is a mixture of Libyans and foreign fighters, and what its military strength is.

That Egypt targeted Darna and ignored Sirte suggest that the Egyptian military decided on an easy target, and one closer to the Egyptian border. This choice also reflects Darna’s status in the Libyan conflict. The city, which Haftar’s forces failed to seize, constitutes a strategic obstacle that impedes coastal communications between Tobruk and Benghazi. Haftar’s forces are engaged in a bitter battle to take control of Libya’s second largest city, Benghazi, and he is forced to avoid Darna and to use a long desert detour to send supplies to his troops in Benghazi.

Egypt has one of the largest armies in North Africa, one of the few armies in the region with operational experience of fighting in a desert environment. Apart from the Tobruk government’s and Haftar’s pleas for Egypt to intervene militarily, Libya represents a huge market for Egyptian labour and products, and can be a source of cheap oil for Egypt. It is not unlikely that Cairo decided to intervene in Libya for these interests, and that the United Arab Emirates, a close ally of the Egyptian regime and of Tobruk and Haftar, will shoulder the financial costs. The regional and global sympathy with Egypt, as a result of the execution of the captives, and the consequent outpourings of anger and disapproval in Egypt, Libya and across the Arab region and the world, suggest that the Sisi regime can intervene militarily in Libya and avoid any diplomatic fallout.

However, there are significant constraints to any such intervention. Despite the size of the Egyptian army, there is considerable doubt about its efficiency and ability to conduct a major military operation outside its own borders. It has not engaged in a real battle since 1973, and it is widely believed that the economic activities of the military have corrupted large segments of the officer corps. Further, the army lacks significant experience in fighting against paramilitary armed groups, or fighting inside cities and residential areas. In fact, the Sinai armed groups, with only a few hundred fighters, have inflicted significant losses on Egypt’s military forces in northern Sinai over the past eighteen months. Equally importantly, despite their repudiation of jihadi groups, most Libyans would reject Egyptian military interference in Libyan affairs.

Furthermore, the Egyptian army’s operations abroad in the past few decades do not instil much confidence. Indeed, it suffered huge losses and painful defeats during the Palestine War at the end of the 1940s, and the Yemen Civil War in the early 1960s. The defeat in Palestine was a cause of the July 1952 coup. Similarly, losses in Yemen had a profound impact on Egyptians’ support for Nasser. In fact, it is believed that the Egyptian intervention in Yemen contributed to weakening its army and to its grave failure in the third Arab-Israeli War in June 1967.

Algeria and Cairo have been competing for influence in Libya, and Sisi is aware that a direct large-scale military intervention in Libya without Algeria’s approval could cause Algiers to extend support to rebels and to the Tripoli government. Among the many condemnatory statements about the hostage killings, Algeria’s official statement included an emphasis on the need for continuous and concerted efforts to reach a ‘political solution’ to the Libyan crisis.

It is therefore likely that Egyptian direct intervention will be limited to the raids carried out on 16 February, and that the Egyptian Air Force will not strike again unless the Tripoli Province group undertakes new provocative actions. Egypt’s involvement could also include indirect intervention. It is no secret that Cairo provided military aid to Haftar’s forces over a year ago, including training and military equipment, believed to be funded by the UAE. The extent of such indirect intervention may become larger in the next few months.

Cairo’s growing concern over the Libyan situation, the inability of Haftar’s forces to achieve tangible progress to resolve the dispute, and the difficulty of Egypt’s solo intervention raise two other possibilities: a collective Arab intervention, or an international intervention involving Egyptian or other Arab forces. Arab intervention would require an Arab League resolution and broad Arab support. The Sisi regime was expected to appeal to the Arab League for such a resolution after the Sirte incident. It did not do so because it knew that Algeria would not support Arab military intervention. While some GCC states might back Arab intervention, it is uncertain whether Qatar, Saudi Arabia, Oman and Sudan would support it. Those countries that are likely to support such intervention lack the military capabilities to do so.

International intervention will require a UN Security Council (UNSC) resolution, and the willingness of a number of major western countries to participate. The UNSC held an emergency meeting on Libya after the Sirte incident, but no member state has yet announced that it will submit a new draft resolution on Libya. If a member state submits a draft resolution to provide international cover for military intervention, the draft could be limited to fighting the Tripoli Province group, or expansive enough to allow for large-scale intervention aiming to forcefully rebuilding a unified Libyan state. It is unlikely that such a draft resolution will secure sufficient support, especially given Russia’s traditional rejection of western military intervention in other countries’ domestic affairs.

Whatever the UNSC’s position on international military intervention in Libya, an intervention of this magnitude would be difficult without US participation. There are indications that Italy and France have become more willing to intervene in Libya, but the 2011 NATO intervention provided sufficient evidence that European countries cannot, without US participation, bear the burden of a large-scale and long-term military operation, and are unwilling to stay in Libya for a long period to enforce peace and rebuild the state. Various western countries, including the USA, affirmed their commitment to a peaceful resolution of the Libya issue on 17 February, after the Sirte executions, thus seemingly rejecting foreign military solutions.

In the first months of 2015, the UN Envoy to Libya, Bernardino Leon, succeeded in engaging most parties to the Libyan crisis. Indicating some progress in the dialogue effort, Libyan groups agreed to move the venue of the dialogue from Switzerland to Libya, albeit for one day. The first dialogue session has already been held in Libya. However, the Sirte incident, the Egyptian air strikes, and increasing calls for foreign intervention from the Tobruk government and from Haftar have cast doubt on the dialogue’s future.

After months of fighting on various fronts, with a decline in Libya’s financial capabilities, and an increasing number of refugees, there is no longer disagreement that the solution to the Libyan crisis must be reached through negotiations. Foreign military interventions, whether Egyptian, Arab or western, will increase the complexity of the crisis and the pain of the Libyan people and deepen their losses. Such interventions could also cause significant harm to the Egyptian army, and to any other intervening military forces, which in turn would provide more fertile ground for the growth of militant groups, and aggravate the crises instead of solving them.

Last modified on Friday, 28 August 2015 13:13
Tweet
More in this category: Sisi’s Egypt: The illusion of stability and the perpetuation of unrest »
back to top